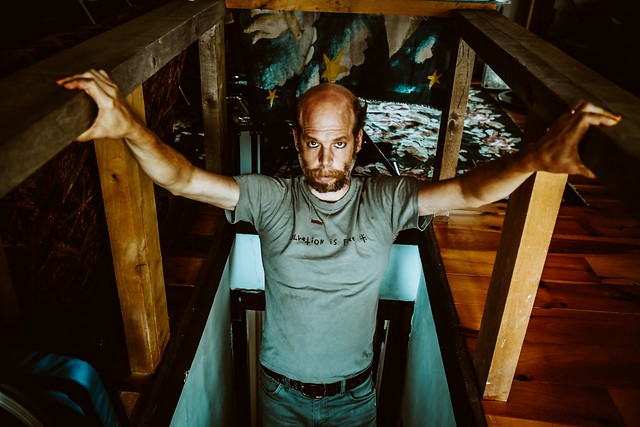 Mickey McCarter: I was listening to your album, the new album, and I was really hypnotized… totally engrossed by songs like “I Have Made a Place” and “You Know the One.” It’s so peaceful and centered, and I just felt very calm listening to it. Does that make sense?

MM: You wrote it in Hawaii, I understand?

WO: I would say the bulk of it was written in Hawaii. On the big island in the Hawaii Volcanoes National Park, actually, where my wife and I were artists in residence for a little bit.

MM: How did that affect the temperament of the album? That’s clearly something that flowed from your experience running it there, right?

WO: Yeah. In fact, we were in the middle of somewhere in the middle of nowhere, at the same time. We were cut off in many ways from the rest of the world. Of course, geographically we were cut off from our community, but we were also up there on top of the volcano. We didn’t really have cell phone service or internet or anything like that for a good long while. And that was, as you might imagine, pretty tremendous — fantastic.

I think, whether most people realize it or not, it’s most human beings’ dream come true. So it couldn’t be that, that whatever peacefulness and tranquility is simply owed to the fact that we were spared some of the insanity that we’re forced to make allowance for in our daily lives these days.

At the same time, it’s a national park and the national parks were created for many reasons and created with a hell of a lot of wisdom.

What we do when we create things, as artists, is ideally to find creative ways to buttress or augment or complement things that are going on. Or are maybe drawing attention to things that are lacking and oftentimes that manifest in things that are controversial or angry or violent. But at that time and in this time, it seems like the complementary statements to be made are statements of centering, statements of balance. That’s counter to what’s going on. That’s the unheard voice. I guess the voice of balance or the unheard voices is the voice of something like tranquility if not tranquility itself.

Stream I Have a Place by Bonnie “Prince” Billy on Spotify:

MM: I get it because I think a lot of artists talk about, they have angry reactions or reactions to anger from sort of the national discourse or whatever’s going on social media that day and people will have these takeaways. But your idea that tranquility should be a natural reaction or a desired reaction makes a lot of sense to me to be honest.

WO: I had a lot of heroes growing up. Jonathan Richman being one of them, but also the late Phil Ochs, who passed away when I was growing up. But I think on the liner notes in the back of his Pleasures of the Harbor record, which is kind of an aggressively pretty record, he says something along the lines of, “in such ugly times the truest protest is this beauty.”

WO: Yeah. Cause to the point where it’s made, for some people it’s almost a little too sweet sounding, but I think there was a reason behind it.

MM: Talking about this sort of thing and talking about being disconnected, some of the stuff that I was reading about you suggests that perhaps you’re a skeptic of internet and streaming and modern ways of doing those sorts of things. You’re not a person who wants to be connected to technology all of the time in general. Is that true?

WO: It is true. Yeah. I think I that I probably tend to question mostly the adopting of technologies and techniques to replace technologies and techniques that have not yet run their course. You know, before we finish with one thing, we’ve been encouraged to think that it’s a good thing to adopt certain technologies as if they are better than something that’s come before. An example would be shoes, like running shoes and the idea that hundreds of thousands of years of evolution can be corrected by scientists at Nike. It’s just completely ridiculous or that anything that you hold in your hand and your device is somehow improving your life in ways that you didn’t already have access to. Thanks to the trials and errors of the billions of human beings that have come before us working shit out.

MM: I’ve also read that Jonathan Richman doesn’t use the internet. He doesn’t read email. He doesn’t get online.

WO: He doesn’t have a cell phone either.

MM: Are you that extreme or are you somewhere in the middle?

WO: I’m somewhere in the middle. Yeah, I’m not that extreme.

MM: Still, have you had a conversation with Jonathan about this sort of thing because it seems like you guys are sort of in tune with each other?

WO: We haven’t spoken specifically about it. We tend to talk about music when we talk, and it’s because I don’t think there’s that much to say because it. Because I’m sympathetic, I wouldn’t really have any questions for him. And I know if you could, a question might be, well, how do you get your shows booked? The answer would be, well, I do this, and I could figure it out. I can figure it out in a day. I’m just too lazy, maybe too, I’m not sure what.

And at the same time he’s at a different place in his life. So there are freedoms that come with advanced years, where you can say, at this point I do not need to spend the energy engaging in this thing because I figured life out at this point, and I’m in the middle. I’m in the middle period. So, I’m still hedging my bets about what to be confident in and what to keep an eye on potentially embracing.

Stream Action Packed: The Best of Jonathan Richman on Spotify:

MM: When you guys tour, might we expect to see you share the stage together or is it two different sets completely?

WO: It’s two different sets, although I volunteered my services as well as the services of my colleague Emmett Kelly as Jonathan’s backup singers on whatever he chooses. So he’s mentioned that he has a little bit of interest in that, and I hope that he takes us up on it.

MM: That’ll be fantastic to see you two guys, being two quintessential artists, doing something together on stage like that.

WO: I have an old friend who he didn’t even know about the tour until a couple of weeks ago. He manages a supermarket here, and I ran into him at the supermarket, and he said he was going through old boxes of memorabilia. And he came upon a letter that I wrote him in 1989 from Los Angeles, California.

And it was the morning after having just seen Jonathan Richman perform for the first time, and he very sweetly took a photograph of it and sent it to me. And it would be very exciting. I mean, Jonathan has shaped my musical sense and aesthetics and credos for decades now. So it would be pretty darn great to be able to make some music together — which we have! Here in my house. He stayed at my house when he plays in Louisville [Kentucky] and there’s been music in the house. But yeah, on a stage would be nice as well.

Bonnie “Prince” Billy appears with Jonathan Richman in an amazing double bill at Lincoln Theatre in DC on Saturday, March 7!