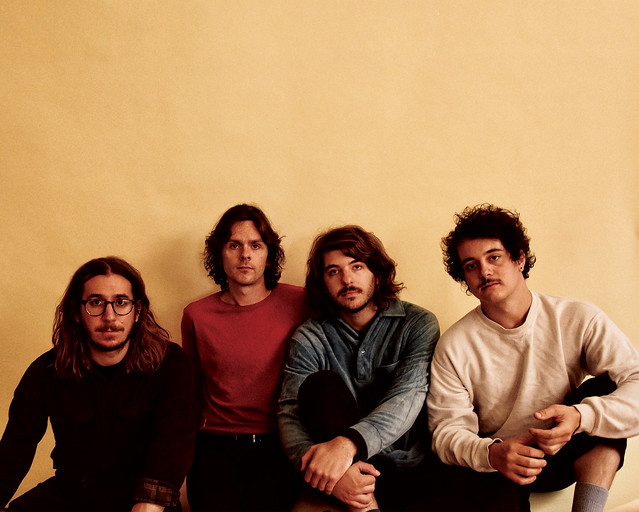 The Districts (Photo by Shervin Lainez)

Philadelphia’s The Districts hit 9:30 Club on Tuesday, March 10, in support of You Know I’m Not Going Anywhere, their new album available on March 13 via Fat Possum.

You Know I’m Not Going Anywhere — produced by The Districts and frequent collaborator Keith Abrams, and mixed by Dave Fridmann (The Flaming Lips, Spoon, MGMT, Tame Impala) — sees The Districts taking an ambitious leap to a new level, exhibiting a widened sense of experimentation and expansiveness at its heart.

Written after playing nearly 200 shows over two years in support of their 2017 album, Popular Manipulations, You Know I’m Not Going Anywhere almost never arrived. As they began to contemplate a new album, singer/guitarist Rob Grote and his longtime bandmates Pat Cassidy (guitar), Connor Jacobus (bass), and Braden Lawrence (drums) faced a transitional period that was painful for both personal and professional reasons, and found themselves fatigued and disoriented as a group. The Districts were forced to rethink everything.

“This album was written as an escape and as reassurance. I was falling in love with someone new and trying to juggle this desperate desire to escape with the need to show up in my life. It’s pretty damn hard to be present and completely checked out all at once,” Rob said. “It felt like much of my world had reached such a pitch that all I could do was try to tune it out. I felt really uncertain about the future of the band and super detached from much of what I used to identify with, on a personal level and with our music. I was thinking, ‘Do I want to keep doing music?’ ‘Do I want to keep doing it in this context?’”

Watch the official music for “Velour and Velcro” by The Districts:

In a review of 2017’s Popular Manipulations for AllMusic, Timothy Monger said The Districts had matured dramatically. We can only expect they have grown even more today!

“Friends since grade school, bandmates since high school, the four members have grown up in front of their fans, self-releasing their first album in their teens and signing a deal with Fat Possum Records not long after graduation. While earlier releases revealed a scrappy, hard-working band performing beyond the expectations of their tender age, they had yet to lock onto an essential sound,” Timothy said.