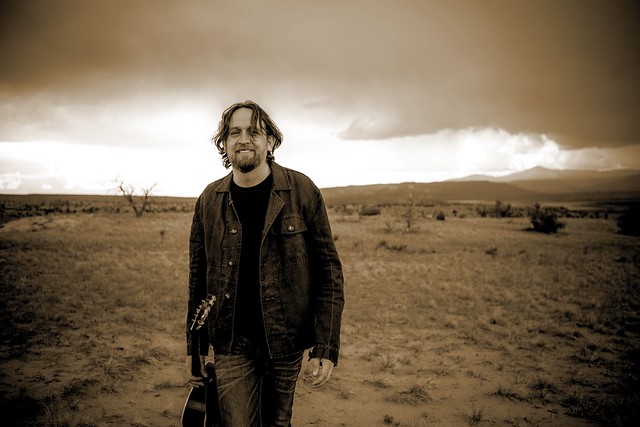 Just under a year into their marriage, singer-songwriters Hayes Carll and Allison Moorer brought their Alone Together Tour to a sold-out Birchmere recently. Allison performed a solo set first, followed by Hayes, who invited her back out for a duet.

At The Birchmere on March 1, Allison opened with “Bad Weather.” She explained that her next song, “Rock Up a Hill,” is about her late mother. Growing up in rural Alabama, Allison and her sister, spent a lot of time driving around with their mom, and many of Allison’s memories of her are in a car, behind the wheel.

After paying tribute to her home state with “Alabama Song,” Allison played one of her early tunes, “A Soft Place to Call,” which she recalled first singing on The Birchmere stage more than 20 years ago. The next number, “Nightlight” was dedicated to her sister, fellow musician Shelby Lynne.

Last year, Allison released the memoir Blood, a reflection on family, tragedy, and healing. As she discussed, she lost her parents at the age of 14 in a murder-suicide. In Blood, she writes about her parent’s troubled relationship and learning to live with the legacy of her father’s abuse. But it’s also, she said, about her relationship with “Sissy.”

In addition to the book, Allison released an album with the same title last year. When she was writing the book, she hadn’t, at first, thought to release a musical companion piece. The album, she shared, came about only at the behest of friends.

The concept for what would become the album’s final track, “Heal,” came to Allison after she thought she had finished writing songs for the album. To put it together, she called on the assistance of her good friend, the Grammy-nominated Mary Gauthier.

A highly gifted writer with an incredible voice, Allison had the capacity crowd at rapt attention. The crowd was dead silent, hanging on every word during her set, which also included “A Thunderstorm, A Hurricane.” A dazzling combination of intelligence, talent, and beauty, it was easy to see why Hayes had fallen for her.

Hayes opened with “Times Like These.” from last year’s What It Is, followed by “Wild as a Turkey.” Between songs, he joked, “We should be called Corona chasers,” what with traveling all over the country, going to crowded places every night, and then shaking hands with any number of folks after the show. His mother, he shared, had sent him an article that suggested shaving one’s beard to avoid infection; I’m sure we can all relate to having our mothers passing along half-baked information!

“Worry Be Gone,” an ode to the anxiety-relieving properties of marijuana, expressed Hayes’s attitude toward these concerns. Introducing “Arkansas Blues,” he talked about going to a small college in Arkansas, where he graduated 268th out of 268 with a degree in history.

The college, he learned after he arrived, was in a dry county. Someone discovered a loophole, however: alcohol could be served in a private club. So, for a $5 fee, anyone could become a lifetime member of the Supper Club. “It was not,” he quipped, “an exclusive club.”

Along with several of his friends, Hayes had his first gig at this non-exclusive establishment. They had heard a rumor that, at that time — the ’90s — you could get a girl to go home with you if you played Eric Clapton’s “Wonderful Tonight.” After squabbling over who would get to sing it, they all agreed that they would play it together at the end of the evening. As he finished “Arkansas Blues,” he jokingly added the line, “You look wonderful tonight.”

Alluding to the three glasses on the stage, Hayes explains how he gets “food envy.” When he’s with his band, he always orders last, lest he be overcome with regret about a fellow player’s meal. He was not, he assured the crowd, a hopeless alcoholic; he was not going to consume all three drinks, he just liked having a choice.

A harmonica intro led off “It’s a Shame.” Continuing to share his life story, Hayes brought up moving to Crystal Beach on the Bolivar Peninsula in Texas after college. As the only person there capable of both singing and playing the guitar, he was able to fill a certain niche. He also attracted some unusual characters, including a drug dealer who would ride around shirtless in a golf cart.

What made this drug dealer such a character, he explained, was not his unusual attire or mode of transportation, but rather how he chose to spend his fortunes: he had a small zoo of exotic animals. He would regularly bring his lion with him to Hayes’s shows.

Later, a hurricane struck Crystal Beach, devastating the area. As the hurricane approached, the drug dealer decided to free all his animals and allow them to fend for themselves during the storm. Instinctively, the lion headed for high ground, which happened to be a church in the center of town that sat three feet above sea level.

The lion was not alone, however, in deciding to wait out the storm at higher ground. Several Crystal Beach residents had the same idea, and they also headed to the church, where they discovered the big cat. Until help arrived three days later, they found themselves in “a redneck Life of Pi situation,” as Hayes described it, alluding to Yann Martel’s fantastical novel and its film adaptation.

Before playing “I Got a Gig,” Hayes expressed his congratulations on the Nationals’ World Series win. When he finished “Drunken Poet’s Dream,” which he wrote with Ray Wylie Hubbard, he asked “Did I skip a verse?” Realizing his error, he recited it quickly, then brought out Allison out to join him.

The couple dueted on Merle Haggard’s “That’s The Way Love Goes” and “Jesus and Elvis.” The latter song is about a bar in Austin where the jukebox hasn’t changed since 1968 and the Christmas lights are up year-round. Festive as this may seem, the story is actually quite dark: the owner’s son went to Vietnam just before Christmas that year, and he was killed in action. The owner has, heartbreakingly, declared that she won’t take down the lights or change the jukebox until he comes home.

Allison co-wrote many of the songs on and produced What It Is. “None’ya,” the lead track, allowed Hayes to display his somewhat off-kilter sense of humor. He explained that a line about pretending to be strangers was a reference to a game they would play when Hayes used his airline privileges to board a flight before Allison.

“The trouble with irony,” as Ray Wylie Hubbard told Hayes, “is not everybody gets it.” While he has no problem with religion or spirituality, as he explained, Hayes does object to people who use it as an excuse to mistreat others, and he expresses that in “She Left Me For Jesus.”

“KMAG YOYO,” as he told the audience, is a military slang for “Kiss My Ass, Guys, You’re On Your Own.” The song, which he joked was “really going for that mainstream audience,” is a tale of explosions, injuries, and drug trips.

To finish his set, Hayes played Iowa folksinger Greg Brown’s “Spring Wind.” He talked about discovering Brown the summer after college, when he and his friends worked husking corn. The set also included “It’s So Easy,” his cover of “Bad Liver And A Broken Heart,” and his ode to the East Texas border town “Beaumont.”

Both Hayes and Allison were excellent, sharing great music and great stories. Hayes has a wonderful dry humor, and both exude contagious passion.