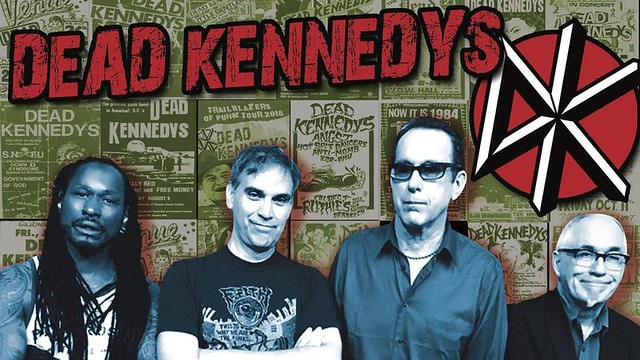 The Dead Kennedys, one of the most infamous punk bands of all time, celebrated their 40th anniversary last year with the release of a limited edition box set last year, published via Manifesto Records.

To further celebrate 40 years, the punk legends perform at 9:30 Club on Wednesday, March 11.

Out of the hundreds of punk bands that emerged from the late ’70s punk scene, only about a dozen or so have achieved iconic status four decades later. They include the Sex Pistols, the Clash and the Damned from the U.K., Blondie and the Ramones from New York, X, the Germs and Black Flag from Los Angeles, and from San Francisco, the Dead Kennedys.

The latter act embodied the spirit of punk from the get-go. Its very name was an extended middle finger at Camelot and the American Dream. Then again, the name would be nothing if the Dead Kennedys didn’t have the goods to back it up. DK40, a 4-LP live collection, offers the aural evidence that the Dead Kennedys were one of the most potent punk bands — period. It features the band serving up amped-up live versions of all their classic tracks, free from the constraints of the recording studio.

Formed in 1978 after guitarist Raymond Pepperell’s ad in The Recycler attracted the attention of singer Eric Boucher, the pair rechristened themselves East Bay Ray and Jello Biafra. They were joined by bassist Geoffrey Lyall, better known as Klaus Flouride; rhythm guitarist Carlos Cadona, who called himself 6025, and Bruce Slesinger, known simply as Ted, on drums.

Watch the official music video for “Holiday in Cambodia” by Dead Kennedys on YouTube:

After gigging around the Bay Area, they soon built a reputation cemented by the release of their first single, “California Über Alles,” on their own Alternative Tentacles label, within a year of their formation. Over a stop-start rhythm consisting of pounding drums, throbbing bass and jagged guitar lines, Biafra lays into then-and-future California Governor Jerry Brown and the hippy dream. The song includes such memorable lines as “It’s the suede denim secret police / They have come for your uncool niece.”

With the follow-up, 1980’s “Holiday in Cambodia,” the DKs showed no signs of letting up. It offered a brutal take on the powers behind the Vietnam War, with Biafra snarling the razor-sharp lyrics, “It’s a holiday in Cambodia / It’s tough kid but it’s life / It’s a holiday in Cambodia / Don’t forget to pack a wife.” The band went onto release their debut album, Fresh Fruit for Rotting Vegetables, in 1980, featuring newly recorded versions of “California Über Alles” and “Holiday in Cambodia,” along with other classics such as “Kill the Poor,” “Let’s Lynch a Landlord” and a notable cover of the Elvis Presley hit “Viva Las Vegas.” The subsequent releases, the 1981 EP, In God We Trust, Inc., 1982’s Plastic Surgery Disasters and 1985’s Frankenchrist albums followed. Live versions of the material from these releases are showcased on DK40.