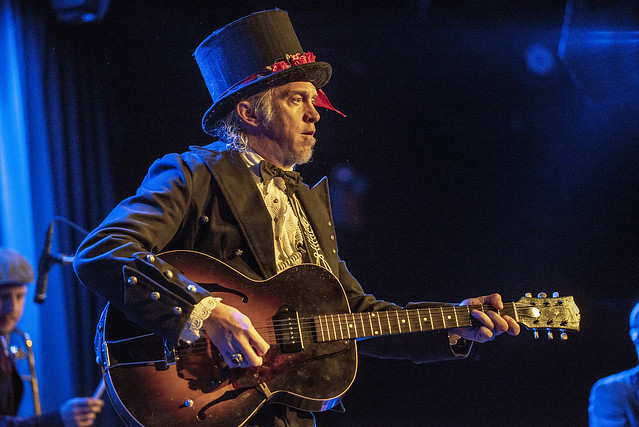 Jimbo Mathus fronts the Squirrel Nut Zippers at The Birchmere on March 5, 2020. (Photo by Rashad Polk)

Laaaaadies and geeeentleemen, if you missed it, you missed the most carnivalistic display of vaudeville performance on The Birchmere stage in recent memory. Those undeterrable rascals, those curious geeks, barkers, and showgirls, the Squirrel Nut Zippers put on an antiquarian revival show of towering proportions.

SNZ’s tour is celebrating the 25th anniversary of their debut album, The Inevitable Squirrel Nut Zippers, and they played it through on a recent evening. Playing in order, they began with “Lovers’ Lane.” For “Danny Diamond,” female vocalist Cella Blue came out wearing a feather boa and waving a fan.

On March 5 at The Birchmere, the fiddle player sang lead on “I’ve Found a New Baby.” Cella made another costume change for “Anything But Love. After “Grandad,” they brought out a saw on “Wished for You.”

Throwing his guitar on his back, bandleader Jimbo Mathus picked up the tambourine for “La Gripe,” which was all about germs. “Brought to you by Purell,” he said. “That song never gets old.”

“Do you guys like to rock out?” Jimbo asked before “Lugubrious Wing.” “That was a true story,” he said afterward.

Jimbo introduced “Club Limbo” as “a strange blues.” “Wash Jones” he described as “a strange song off the Inevitable record. Redundant.”

Getting toward the end of Inevitable, SNZ played “Driving Me Crazy.” “If you lose the one you love,” Jimbo told the audience, “there’s always ‘Plenty More’.” The audience sang along to the chorus.

Introducing “Carnival Joe,” Jimbo intoned, “Every nerve, every muscle, every fiber will quiver.” “Here’s something from the ’90s,” he introduced “Lid on It.” “Bad Businessman,” he explained, is about “a drug dealer from the turn of the century.” He told the audience, “This is the dance portion of the evening,” and the lights came up to reveal several couples swinging between the tables.

The night reached its absurd peak when SNZ played their breakout single, “Hell.” One of the band members put on a chimp mask and prowled the stage.

SNZ finished their set with “Ghost.” Returning for an encore, they played “Axe, which is on their new album, Beasts of Burgundy. They followed that with “Prince Nez,” which Jimbo described as “a randy number about a gentleman with poor eyesight.”

To send the audience home, they played “Hey Shango.” The band paraded through the crowd, and Cella climbed up into the booth in the center of the hall. And the party just kept going out into the lobby, with SNZ acting as a pied piper and leading the audience out. When they finished marching, they embraced old friends in the audience.

It was a great party, and all you’d hope for from SNZ. It was a little strange, and it was a lot of fun. These folks know how to throw a party.

Here are some photos of the Squirrel Nut Zippers performing at The Birchmere on March 5, 2020. All photos copyright and courtesy of Rashad Polk. 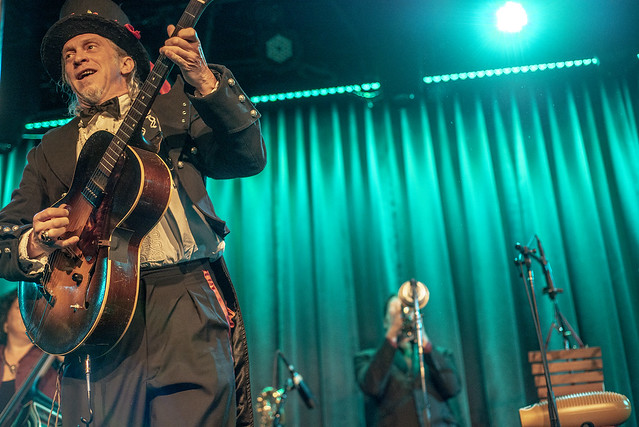 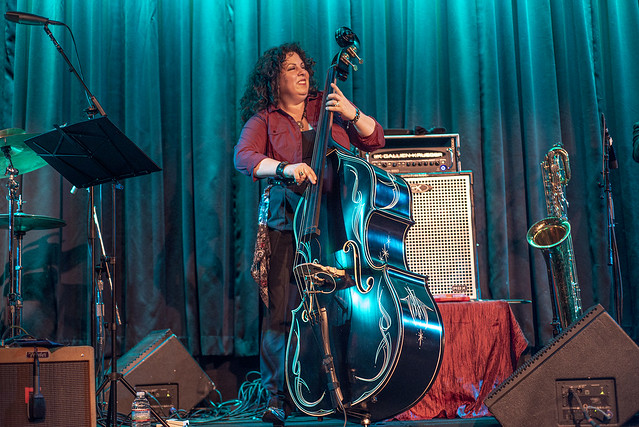 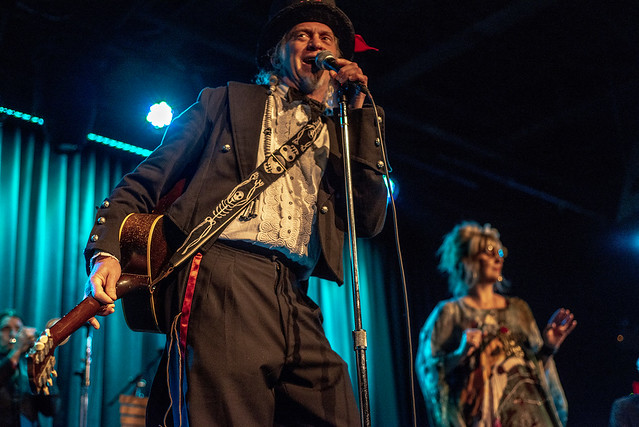 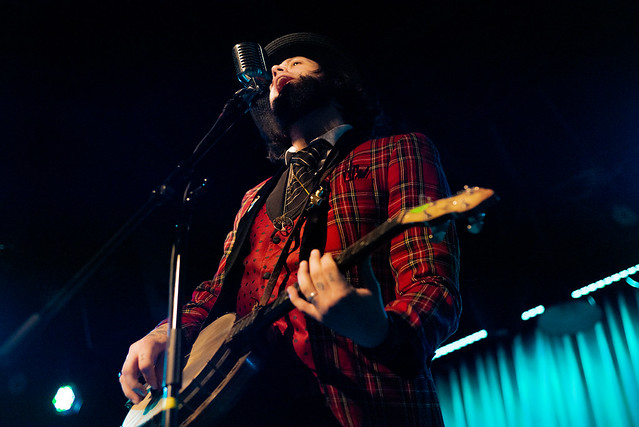 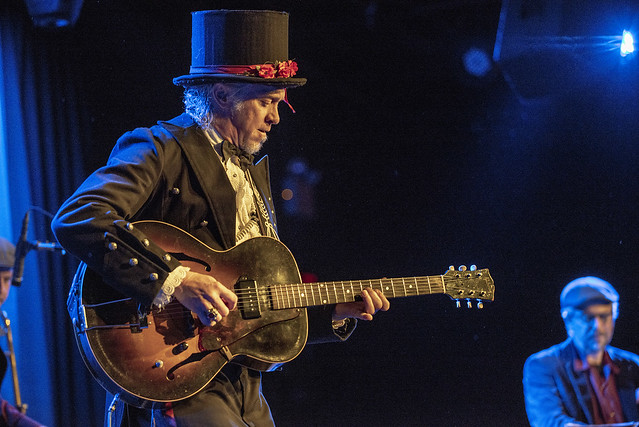 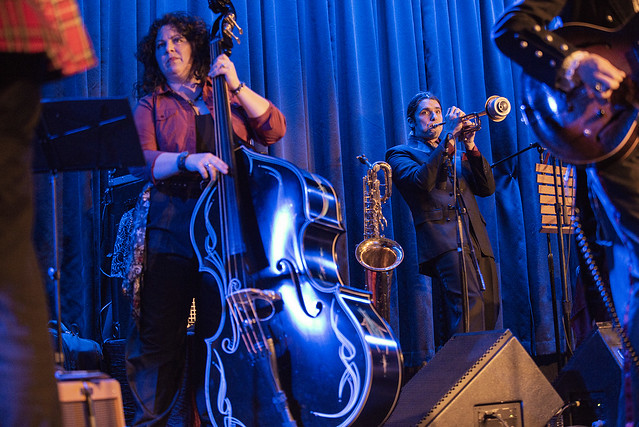 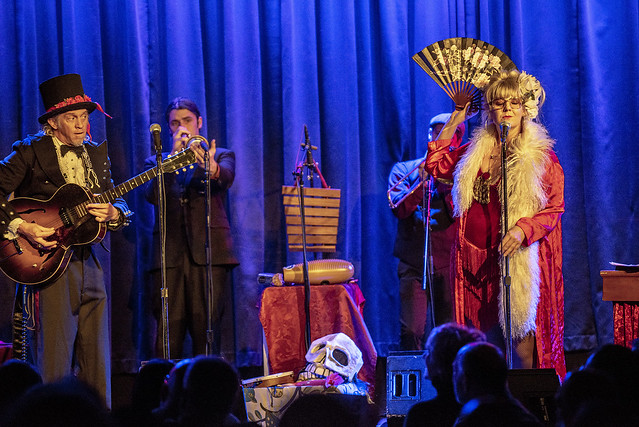 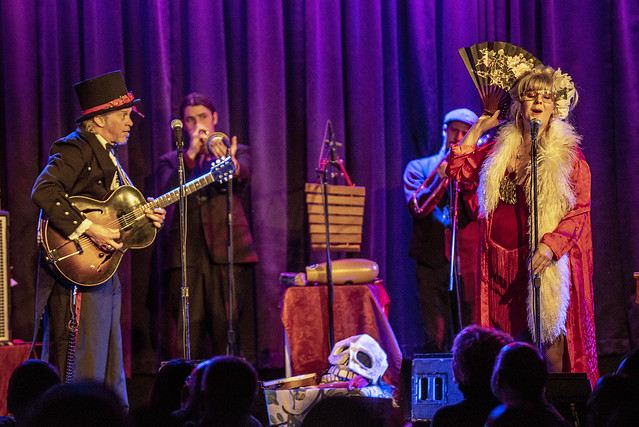 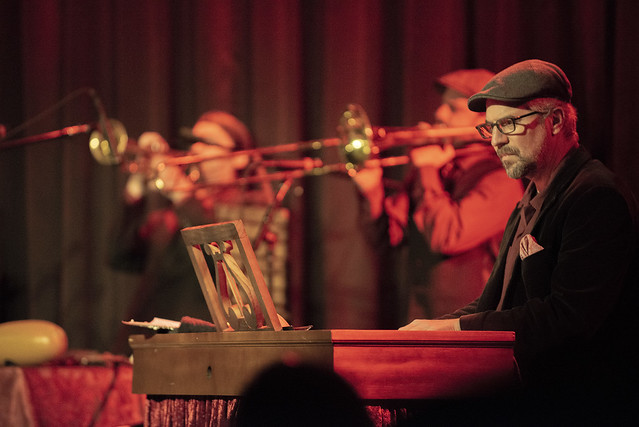 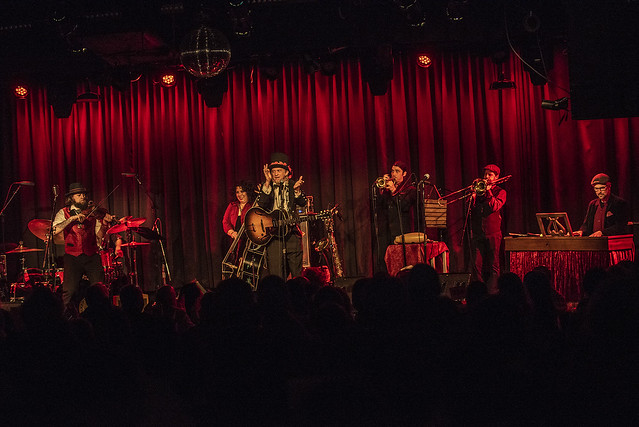