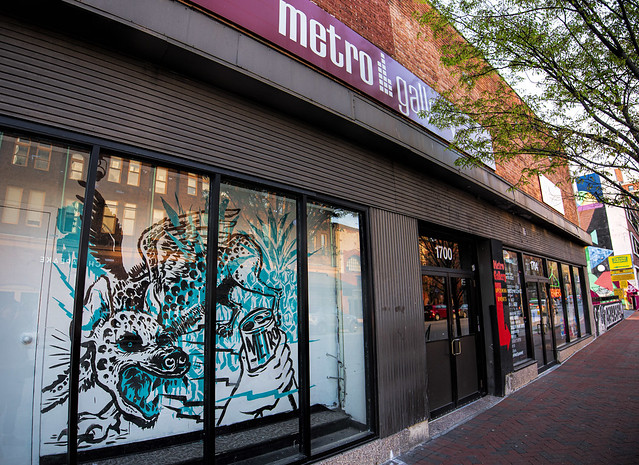 Baltimore has been host to some legendary musicians and, I’d say, just as legendary music clubs. In addition to being a gallery space for the visual arts, the Metro Gallery, which is a mixed media space in the heart of Baltimore’s Station North Arts District, has been putting on some of the most eclectic performances by the best artists — local and international — you’ve ever heard of (or shortly will).

Starting in 2007, the Metro Gallery has showcased the best in rock, Americana, and hip hop. It is a regular fixture of Maryland Doom Fest, the citywide death metal and hardcore festival, as well as the Shadow Frost Music Festival. And the club has been host to artists such as Andrew WK, Maggie Rogers, Baroness, Beach House, The Dirty Projectors, Turnstile, Dan Deacon, Jonathan Richman, Sharon Van Etten, Wye Oak, The Dead Milkmen, The Deadboys, Future Islands, Evan Dando, The Dismemberment Plan, Low, and a special reunion show for post-punk icons Jawbox.

In fact, the Jawbox show was the first time since 1997 that the band had performed in a rock club.

Watch a video of Jawbox performing at the Metro Gallery on YouTube:

With a maximum capacity of 240, the Metro Gallery may be one of the smaller clubs in the Baltimore area, but it has attracted ardent music fans and artists alike.

Read Parklife DC’s coverage of concerts at the Metro Gallery.

In addition to the range of local draft beer and cocktail menu, it also helps that the club is located across from the Charles Theater, which has runs of blockbuster as well as arthouse films, several eateries from crepes to tapas, and there’s even one of the best pizza places around — Joe Squared a block away.

Last year, the Metro Gallery celebrated 12 years of bringing some of the best music to the Baltimore area. It’s become one of my favorite places to go. On more than one occasion, I’ve looked around — and maybe it’s the room or the vibe or maybe just the air around the place — and you can feel that sense of community. I remember over last summer seeing Idles and Fontaines DC at the Metro Gallery and turning to a couple who where there and just talking for the hour or so before the first band hit the stage — talking over our love of great music. It’s that sense of community that the Metro Gallery fosters.

In tough times, it’s a comfort knowing there are places like the Metro Gallery around.

For a concert schedule and more information about the Metro Gallery, visit its website.