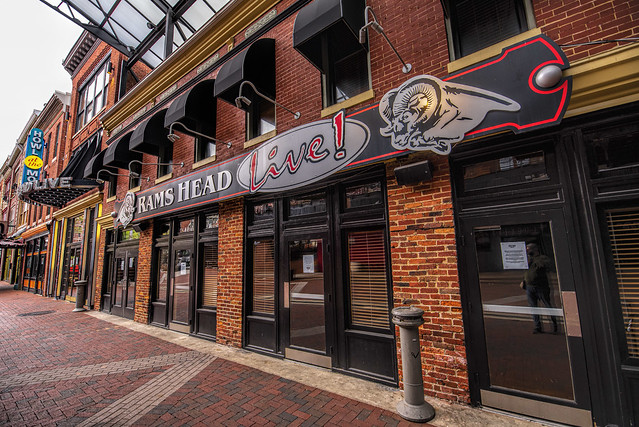 Located right by the Inner Harbor, Rams Head Live! is surrounded by restaurants and bars, and it’s just a stone’s throw from both Camden Yards. The venue itself has a huge dancefloor with a capacity of 1,400 concert goers with five bars and three tiered levels with views of the stage. There is even a stage that can be set up right outside the venue in the open air for special outdoor events.

Rams Head Live! was once part of a chain of music venues throughout Maryland. The rest of the chain is still owned an operated by promotions company Rams Head Group, and the locations include Rams Head on Stage in Annapolis as well as Rams Head Tavern, Rams Head Roadhouse, Rams Head Shore House, Rams Head Dockside, and Rams Head Southernmost — the latter in Key West, Florida!

Owned and operated by Los Angeles-based AEG Live since 2015, Rams Head Live! has garnered praise over the years, landing on best of lists throughout the decade and a half they’ve been around. And it’s not only the convenience, the location, or the size of the venue; a big part of the appeal of Rams Head is the friendliness of its staff and feeling of being around friends.

And I think that’s a big part of this community. It’s a big city with often a small town feel that’s often referred in admiring terms as “Smalltimore.”

And I think Rams Head Live! is one of those places that fits that description too. It’s big enough to host some big shows with popular artists but small enough to retain that neighborhood feel.

Find out more about Rams Head Live! and their schedule here.