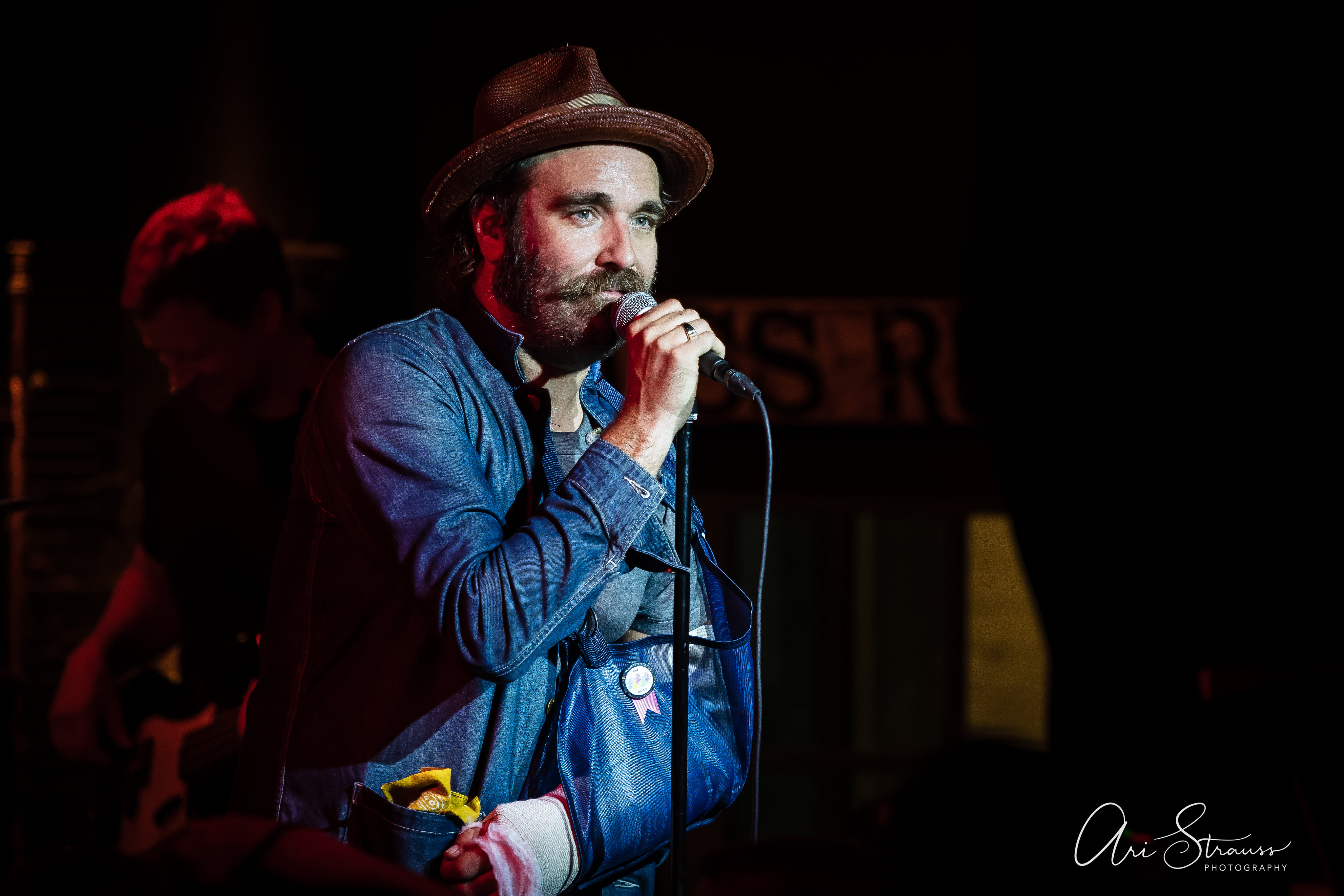 Scott Terry is a road warrior. Red Wanting Blue, the Columbus, Ohio-based band he founded in 1996 while a student at Ohio University, has spent the better part of two-plus decades on what seems like a perpetual tour.

With no touring scheduled due to the national coronavirus emergency, Scott chatted with Parklife DC’s Ari Strauss from Brooklyn about his thoughts and activities during the lockdown.

Scott says in the band’s official bio, “We’re a touring band. We’re on the road all the time, so much so that it’s painful when we’re not. When I was younger, I used to get heart palpitations if I was in the same place for more than four days.”

With such an existential emphasis on performing live, I wondered how the band is managing during the COVID-19 lockdown. To find out, I spoke with Scott by phone recently while he was social distancing at his home in Brooklyn.

I started by mentioning the quote in the band’s bio and asked if he is feeling any pain or anxiety from not being on the road. He chuckled a bit and said, “Fortunately, I’ve gotten a little more comfortable with being in the same place for a while. For years and years, it was like that though, where you feel like you’re always supposed to be somewhere so I should probably go, and we should probably be moving.”

“It’s nice now,” he continued, “I don’t stress about that very often, but I do think about… Like it’s a weird thing to live in a place separate from where the band is from. I live in Brooklyn and the band is based out of Columbus, Ohio. I know they’re dealing with it too, but not quite as bad as it seems here [in New York] but I guess it’s not going to take too long before it’s the same for everybody.”

I asked Scott if everyone else in the band lives together in Columbus. “No,” he said, “my guitar player, Eric, lives in Hoboken [New Jersey] but his wife is Canadian, so they headed up there to ride this thing out in Canada. I considered doing something like that too, but you know, I love where I live. I’m standing on this roof right now overlooking the skyline of the East River but it’s a weird thing, you know, to be in the number one epicenter of the coronavirus stuff for the United States. It’s a bizarre thing.” 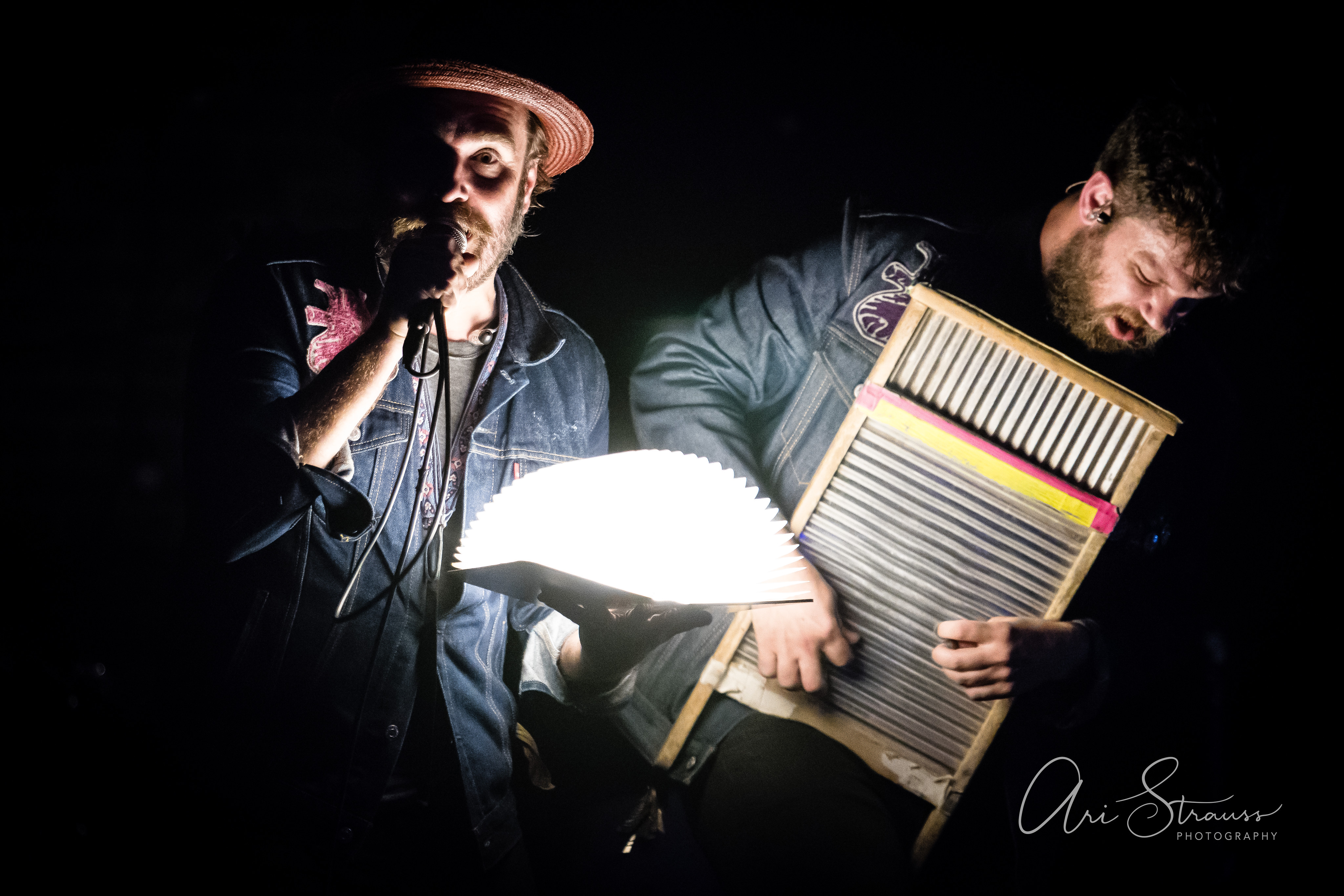 After exchanging personal anecdotes of adapting to social distancing and comparing the situations New You City and DC, Scott expressed some real concern for how things end up on the other end.

“By the time we ultimately get through this, I think a lot of people’s neighborhoods are going to have a different face than they had when it started,” he said, “because business just can’t hang on. I mean, even large businesses are [shutting down]. No matter the size, I guess we just can’t afford to have business slow down. Sometimes, it’s like, your margins can be so thin; I can’t imagine how neighborhood restaurants are doing.”

Scott lives on a neighborhood in Brooklyn with some legendary pizza shops, one of which is on his block. “My wife keeps telling me, ‘you can’t order pizza every day,’ and I’m like I know, but I want to keep them employed. I want to keep them busy,” he said with a chuckle.

After a pause, Scott reflected, “And I’m saying this right now as a guy whose entire… you know, a portion of his career is sort of up in the air right now.” I responded that there may be some venues scheduled for his next tour that might not still be around once touring resumes. He agreed, saying, “I would almost guarantee, which is a shame, that’s going to very well be the case. I sure hope not, but that’s probably going to happen at some point.”

Red Wanting Blue was scheduled to launch a spring tour the last week of April, which was to include a now-canceled May 3 performance at DC’s City Winery. “I can’t imagine being a booking agent right now,” Scott said. “I’m so lucky to have the agent that we have. I love working with Madison House and Jordan Burger, our agent. He’s great, but he’s got to have the toughest job right now, just because everyone is scrambling.”

Stream The Wanting, the latest studio album by Red Wanting Blue, on Spotify:

Scott takes some pride in the music community’s reaction to the COVID-19 situation. “It’s been really cool to watch and see things like face time and social media help keep artists and fans together,” he said.

He continued, “And you know, it’s not just touching out to people, but like also things like, ‘Okay, well I guess we’re going to try and entertain some people. I mean, I’m not one to ever do an online performance, but the other week, Sixth Man, which is an organization that produces a lot of the music cruises asked me would you mind jumping on [our Facebook Live] and performing a few songs. I was happy to do it and it was nice thing to see so many people [tune in].” Red Wanting Blue has performed with the Rock Boat cruise for the last decade.

“I didn’t think it would matter to that many people,” Scott said, “but it really did seem to matter, so I’m glad to know that these communities are keeping fans connected. It’s nice to see people reaching out that way.”

“It’s funny,” Scott added with a laugh. “It’s such an awkward thing being a performer. I’m used to walking out on stage. I’m used to knowing what songs I’m going to play, and I perform those songs. So, you know, even if you write out a setlist, it’s such a strange feeling for me [to perform online]. It feels very fish out of water. It takes some getting used to. You know, I’m sitting in my house. There’s no lights on… there’s no stage lights. There’s no theater to what’s happening anymore. I’m just going to be sitting here and it’s just gonna be you and me on a computer, and I’m gonna sing some songs, I guess.”

“I’m glad to know that it can be entertaining for people for a short period of time,” Scott said, “but I can’t imagine doing it for more than a half hour or 40 minutes, but it’s nice to know, especially now, that people are looking for something to take their minds off what’s happening.

In that vein, Scott has been using some of his time off the road to revive a small project from two years ago into online content so fans can enjoy it while they are stuck at home.

“Back in December of 2017, my guitar player, Eric, and I went out on a short two-week experimental tour with our close friends Tim [Warren] and Eric [Donnelly] from The Alternate Routes“, Scott said. “We played small venues, crafting the show town to town, singing each other’s songs, and sharing stories from our many years of friendship and travel. We called it ARWB.”

“One of the nights we were in New York City we performed at Rockwood Music Hall and had a concert film made of it. We haven’t really done anything with the film; just been sort of sitting on it. But now, we figured it would be a great time to share it with our fans,” Scott told me excitedly.

The Rockwood Music Hall concert was broadcast on the Red Wanting Blue YouTube page over four nights in April.

View ARWB performing at Rockwood Music Hall in a 17-clip playlist on YouTube:

Of all the songs in the Red Wanting Blue catalog, there is one in particular — “Hope on a Rope” — that has deep meaning for me — and, as it turns out, for the band too.

Scott wrote “Hope on a Rope” while the band was performing in Marquette, Michigan, on Lake Superior, which is why the song has a nautical/fishing town theme. The band had also been talking about Gordon Lightfoot’s song, “The Wreck of the Edmond Fitzgerald” about the ship that sank in Lake Superior.

“I drew some parallels to being a group of kids in a rock band, you know; it’s a lot like how I imagined being a sailor. You know, some ships are bigger than others. Some crews are bigger than others, but there’s a lot of boats out there and I remember us as a band drawing [meaning] from that. That’s why the chorus of the song goes, ‘…the butt of a bad joke, you push yourself to the limit, kid, thatta boy way to go,’ and it’s that idea of being in a rock and roll band is a lot like, it’s a lot like a pipe dream and it’s the kind of thing that people say, ‘you’re not going to make it,” and we’re defiant and say, ‘You’re probably right, but we’re gonna do it anyway.”

“So,” Scott continued, “It doesn’t matter if it’s a good night or a bad night, if there’s 5,000 people in the crowd or if there’s five people in the crowd, it’s a song that’s become a mission statement for us and we’re still always proud to play it. That’s why the song changes. We have an ending to that song now that’s constantly changing because we want to keep the music vital and not stale, and not just get boring. By the end of the song the band gets really charged up. I love seeing people who don’t really know our band and are probably like, ‘What are they doing? The song was pretty much over and they just kept going for three more minutes of just jamming or whatever.’ And for us, it’s just like shaking your spears to the sky, so to speak.”

Red Wanting Blue has written a lot of songs, and Scott admits, some days, depending on the venue or the crowd, there are songs they just prefer not to play on a given night. But no matter what, they are always ready to perform “Hope on a Rope.”

“If somebody said you have to give people one song that represents who you are as a band, I would probably say it’s ‘Hope on a Rope.'”

In 2016, Red Wanting Blue celebrated its 20th anniversary with a big concert in front of a hometown crowd at Lincoln Theater in Columbus. When it came time to play “Hope on a Rope,” Scott introduced the song by saying, It’s a song about struggle and it’s a song about holding our breaths. It’s a song about battling the waves that want so badly to sink us, and most importantly, its song about staring back at those waves and saying, ‘Not today.’”

Listen to RWB20 Live at Lincoln Theatre by Red Wanting Blue on Spotify:

As people all around the world share feelings of anxiety and despair from the COVID-19 pandemic, perhaps Red Wanting Blue’s message of defiance can inspire all of us to stare back at the waves and say, “Not today.”