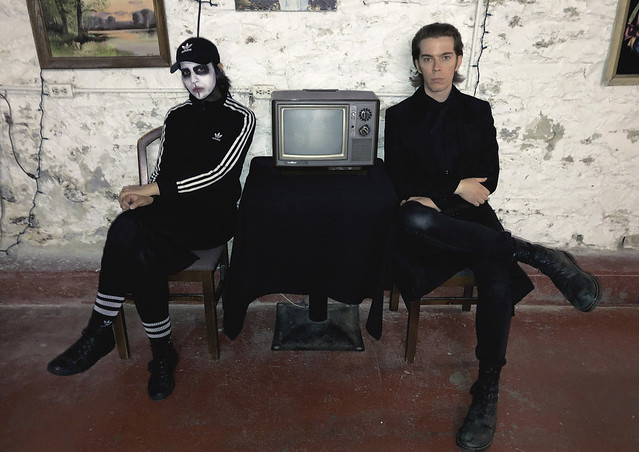 LA-based duo VOWWS reveal the official video for their latest single “Impulse Control.” The song arrives on the heels of a partially completed world tour with Poppy (including a stop at U Street Music Hall) during which time VOWWS wrote the menacing, angular DEFCON 1 anthem.

The accompanying video, which directed by Jesse Draxler and VOWWS’ Rizz, was shot partially in LA’s Little Tokyo just prior to shelter in place orders. The video flawlessly captures our current dystopian climate of paranoia, mania, absurdity and occasional gallows humor.

On “Impulse Control,” Rizz and Matt of VOWWS said: “It’s a unique time for humanity, the machine has stopped and we’re all in solitary having to deal with ourselves. There’s a lot of anxiety that we can’t really run from. Like everyone else, we’re processing a huge shock and experiencing things we’ve never dealt with before. We’re grateful to have an outlet for some of the angst, it feels like the best way we can work through something this intense is to capture the feeling and represent it somehow. A lot of the song came out of nowhere, straight from the void probably.”

Watch the official music video for “Impulse Control” by VOWWS on YouTube:

VOWWS describe their project as ‘Death-Pop’ — existential angst and longing, feeding on a diet of popular culture, cinema and advertising. On their first two records, 2015’s The Great Sun and 2018’s Under the World, VOWWS honed a unique approach to writing and production.

Working with producer Kevin S. McMahon in his upstate New York studio, the band record in a 200-year-old barn and feed every instrumental part through a wild array of vintage & repurposed gear. The result is a sound more tactile than most electronic-based music, whilst retaining some machine-like coldness that offsets their ruminative lyrics, sounds, and images.

For more music by VOWWS, visit the band’s website.