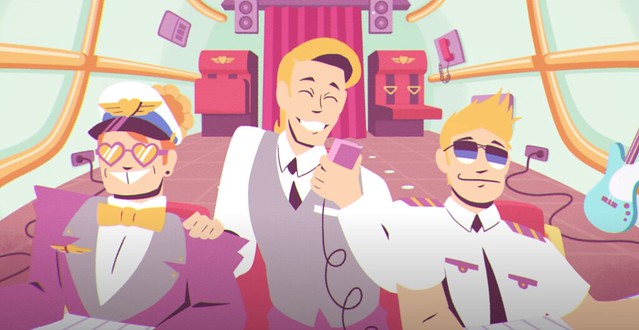 Released on June 12, “Learn to Fly” accumulated over 6.4 million global combined streams within its first week. A lighthearted animated short, directed by Ivan Dixon (Childish Gambino’s “Feels Like Summer”) and produced by Sean Zwan from Studio Showoff, the “Learn to Fly” music video exhibits the same whimsical spirit of the single, depicting the musicians as singing pilots flying through the sky.

Surfaces on the music video: “We were incredibly excited to work with Studio Showoff again, to bring to life the message of “Learn To Fly”. The video really hits home and paints the universe we’ve been trying to create with every step of our journey as musicians.”

“Having heard ‘Sunday Best’ for the first time in Australia and liking it so much, I was surprised when the guys reached out to me to sing and play a little piano on ‘Learn to Fly,’” Elton John said. “I loved the song and the production on the track they sent me. We recorded via Zoom in LA and it was so much fun working on a non-Elton record. These guys are terrific, and we had a blast collaborating.”

Watch the official music video for “Learn to Fly” by Surfaces and Elton John on YouTube:

Surfaces released their third studio album, Horizons, earlier this year on Feb. 28. Peaking at No. 24 on the Billboard Hot 100 Chart, the success of “Sunday Best,” which now has over 1.1 billion streams, skyrocketed the duo to the No. 1 spot on Billboard’s Emerging Artists Chart. Currently, “Sunday Best” is No. 6 on Apple Music’s Today’s Hits Playlist, No. 24 on Spotify’s Global Top 50, and featured on the platform’s Today’s Top Hits playlist, No. 7 on Amazon’s Pop Chart, and No. 5 on Pandora’s Trendsetters Chart. In addition, “Sunday Best” is currently being used as part of the Beats by Dre campaign featuring LeBron James, Serena Williams, and more.