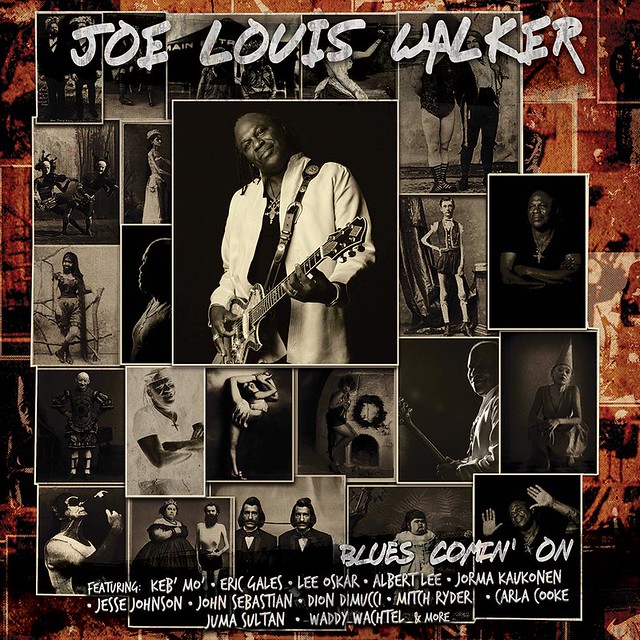 Blues Comin’ On, the latest offering from blues guitar legend Joe Louis Walker, was released on June 5, 2020, from Cleopatra Records.)

Blues artist Joe Louis Walker has been making music with his voice and guitar for over a half century. A 2013 Blues Hall of Fame inductee and a four-time Blues Music Award winner, Joe has learned from, been a mentor to, or simply played alongside just about everyone in the business.

Parklife DC’s Ari Strauss had the opportunity recently to speak with Joe by phone to discuss the new album, his career, and the many wonderful artists he’s played with over the years.

Ari Strauss: Hi Joe! Thanks for making some time to talk with me about your new album, Blues Comin’ On. Is this your first project with Cleopatra Records?

Joe Louis Walker: Actually, it’s my second… no wait, my third. I did a live album last year (Viva Las Vegas) and a separate DVD, and now this studio album.

Stream Blues Comin’ On by Joe Louis Walker on Spotify:

AS: How did this project come about and how did you choose the artists you wanted to work with on it?

JLW: Well, I started recording in 2015. It wasn’t for this record; I was just recording for another record in fact, entitled Everybody Wants a Piece. I ended up touring off of that record for quite a while because it was nominated for a Grammy. I toured for about two and a half years, but I was also putting down tracks for whatever was going to be coming up.

Around that time, a young friend of mine that writes poetry sent me a poem that he’d written, and it sort of got me interested in doing something with bunch of different people. He wrote the first song on there called, “Feed the Poor.” So, when he wrote that it sort of got me going and I thought maybe I can call some of my friends to work with.

And so we took that first song, “Feed the Poor,” me and the young man who wrote it, Gabriel [Jagger — son of Mick], we gave the proceeds to food banks in England and the United States — he’s British — and it just got me going with that sort of feeling about the record, so I thought who better to play on that song because at the end there’s sort of a long coda jamming in and out and I thought who better to do it than [Hot Tuna’s] Jorma [Kaukonen] to do it if he had time. And over the course of a couple years, Jorma was very busy, but he made time to do it.

That was sort of the impetus for me to get going with this record that sort of encapsulates people I’ve looked up to coming up, people who are of the same age, and people who maybe are a little younger that I look up to, and people who aren’t household names but have had a lot of success and whatever happened, they’re still around and still at the top of their games. So, it sort of came together that way, organically.

AS: Your last comment there reminds me of a line I read in a Washington Post article from 2016 that previewed a performance you were giving at a club in Bethesda. It said, “Joe Louis Walker belongs to a lost generation of blues performers. He was too young for Muddy Waters’s and Buddy Guy’s era of classic electric blues; now 66, he’s too old for the revival being led by Gary Clark Jr. and Derek Trucks.”

Do you agree with that assessment? Do you feel stuck between two distinct eras of blues music?

JLW: Well, I feel that I’m a ‘tweener — I just call it an in betweener. They put it very distinctly in that piece but what they didn’t say was that those people you named, just about all of them, I played with them, or been around them, or I opened for them… everybody from Muddy Waters to Willie Dixion to a lot of the older guys [like] John Lee Hooker, and I’ve played with Derek [Trucks] and Susan [Tedeschi], I’ve played with Baby Doyle [Bramhall II], Joe Bonamassa when he was a youngster…I’ve known them all.

And so, I’m sort of fortunate in that I am a tweener because the music that I make is the same thing. You know, I infuse it coming originally from San Francisco listening to all kinds of music: blues, soul, funk, rock, psychedelic; and so that’s what informs my take on the blues. And so, that frees me up to not be associated as a Chicago blues guy or a Mississippi blues guy. I’m not a Texas blues guy like my friend Stevie Ray Vaughn… I’m none of those things. I feel like I am free to do whatever I want to do within the genre because I don’t have a geographical area to represent or a time and space to represent. 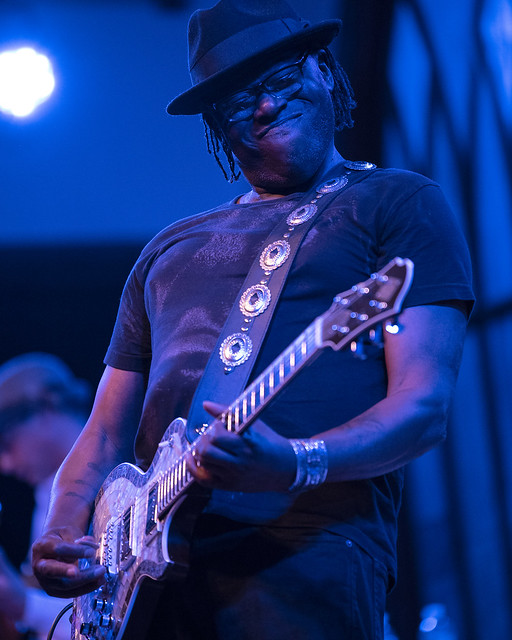 AS: Would you say your style transcends your Bay area roots?

JLW: I think so. I say the best description of my style is what an old guy, Willie Dixion, told me years ago. I used to go down to his house in Southern California to write and learn. Just to be around Willie was great for me and after about two or three writing sessions he said to me, ‘I figured out your style Joe,’ and I said what do you think Willie?

He said, ‘It’s all over the place.” And he said, ‘Keep it that way, Joe, because you are a microcosm of all the things you’ve learned. You’ve played with everybody from Herbie Hancock to Wayne Shorter to Ronnie Wood to Waddy Wachtel and bla bla bla…and it all comes out when you play. The worst thing you could do is put yourself in a box because you don’t need to be in a box.’ I always took that to heart.

AS: You’ve played music for a long time. I’m sure along the way you’ve come across some folks you consider a mentor. You just mentioned one, Willie Dixion. Who are some of your other musical mentors?

AS: Who do you see as the next generation coming up? Are there any folks you are taking under your wing and helping along just like the Steve Cropper’s and Willie Dixons of the world helped you out?

JLW: Well, I work with a lot of great young people. Vanessa Collier is one; she’s out there on the road a lot. I work with a lot of young people that have come through my band and been on my records. I worked with Eric Gales; he’s on this record. I’ve known him since he was fifteen and used to come by the studio to watch what we were doing with Little Trucks, you know, Derek. I’ve known him too since he was fifteen. and Baby Doyle… Doyle was going to be on this record. I have a track that Doyle played on but I have so many songs on this record so I couldn’t do it. I’ll probably use the track with me and Baby Doyle sometime in the future and I’m sure me and Little Truck will do something in the future too. There are a lot of them. I see a lot of young people doing it their own way and I’m proud of them.

AS: What are some of your memories of playing DC? Any favorite venues or special occasions?

JLW: Oh my, I’ve got so many memories of playing in DC. I guess the first is back in the eighties playing at the old club, Twist and Shout [in Bethesda]. That was a very famous blues venue. It was a Veterans of Foreign Wars hall that was used as a blues club on the weekends and everybody played there.

I have memories playing for the Smithsonian and playing on July 4th at the memorials there with Carl Perkins, Scotty Moore, and DJ Fontana. I played at the Kennedy Center with Aretha Franklin. I have memories of playing at the non-partisan inauguration concert for George H.W. Bush in 1989.

I helped induct B.B King in at the Kennedy Center Honors in 1995.

I played with Booker T [Jones] Steve Cropper, [Donald] Duck Dunn and so many others in a PBS special at the White House in 2012 for President Obama called Red White and Blues.

I’ve got so many great memories of DC…I played at the famous Howard Theatre when that brought it back…I’ve played at The Birchmere… I’ve been all over DC.

AS: Did you have plans to tour with this album before the COVID-19 pandemic happened?

JLW: Well of course! We were planning to do a lot of stuff.

We had a tour planned across the United States planned and then to Poland in a few months, but all that’s sort of put on hold. I do have a few gigs though. I’m playing [in a couple weeks] at a place called the Tupelo Music Hall up in New Hampshire [July 24] because they have a drive-in theater adjacent to it and they’re using the drive-in now for their shows. Then the next night I’m playing in Plattsburgh, NY at the Plattsburgh Blues and Jazz Series (July 25).

AS: Other than this tour when it’s ready to go, what’s next for you? You mentioned a song with Doyle Bramhall that you might incorporate into another album.

JLW: Well, I’ve got about eight songs already that would be enough for another album but I’m going to record about four more songs so I have some options, but I do the old Jimmy Hendrix thing. When I record one record, I start recording two at the same time. I just record tracks and the best tracks that go for that particular project work. Some albums you start off with an idea, but I find if you just start recording the best songs will sort of rise to the top for whatever it is you’re doing at the moment. Then, if you have other songs, you say, ‘Oh, this sort of leads me off in another direction.’ So, I’m always tracking, especially if the musicians are having fun and we’re on a roll. Why, go in the studio when you’ve got it for five, seven, or eight hours and just record two or three songs? Why not just keep recording?

AS: I’ve always been interested in the philosophy behind arranging tracks on an album and making one song lead into the next. Do you have a distinct method for how you lay that out or do you just take the songs that rise to the top when you have enough to fill an album and release it. How do you do that?

Also, I don’t like to have three or four songs in a row in the same key. I don’t like to have one song that is very similar to the last song. I might have two songs at a medium tempo, then a fast song, and then a slow song. I’m not going to have three slow songs in a row. I’m not Otis Redding. He could do that, but I haven’t seen very many other people who could pull that one off.

I think you become a student of the game. I go and I see successful people and how their shows flow and I think it’s almost as important as what you play, it’s when you play it that’s important too.

AS: Joe, thank you so much for speaking with me about your career and the new album, Blues Comin’ On. It’s been a real pleasure and I hope I get to see you come play here in DC real soon.