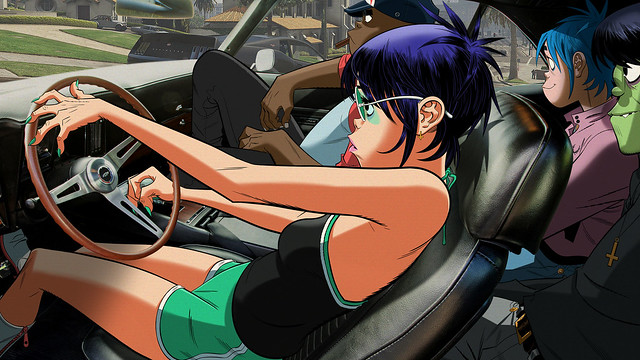 Gorillaz now drop “The Valley of the Pagans,” featuring Beck, the latest episode from the critically acclaimed ever-evolving Song Machine, which has seen Gorillaz take us through 2020 with a myriad of sounds, styles, genres, and attitudes from a breath-taking line-up of guest artists captured live in Kong Studios and beyond.

The video for the track, featuring BRIT- and Grammy Award-winning artist Beck, sees the idiosyncratic, West Coast infused “The Valley of the Pagans” blast through the band’s car stereo as animated rockstars 2D, Murdoc, Noodle, and Russel take a chaotic road trip through the streets of Los Angeles, with Beck joining the fun via FaceTime.

Watch the official music video for “The Valley of the Pagans” by Gorillaz featuring Beck on YouTube:

Song Machine is out on standard CD, vinyl, and cassette — plus the 17-track Deluxe and Super Deluxe box sets. Not forgetting the bulging full-colour, one-of-a-kind 210-page Almanac, the very first annual from Gorillaz. Order here.