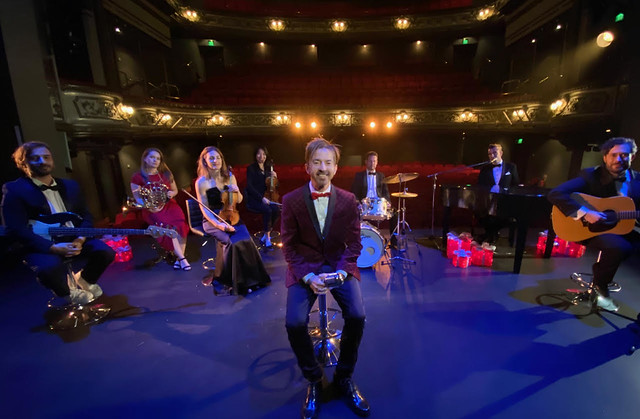 UK music icon Limahl releases the festive single and video “One Wish For Christmas.” The holiday-themed track is an update to his previously -released song “London for Christmas” (originally released in 2012), reflecting the effect that the COVID-19 pandemic has had.

“I was very happy with the song and as usual was planning to re-release it as is. However, this year during COVID, I was thinking about the lyrics and how they’ll have more value/poignancy because they talk about the many things we’re all unable to do, such as travel/ tourism, romantic hotel/ city break, cocktail bar, theatre, etc.,” Limahl said. “With all the extra time in lockdown to be creative and as it’s been eight years since we first wrote it, we decided to revisit the production.”

Filmed in Watford, England’s historic Palace Theatre which was built in 1908, the video for “One Wish For Christmas” features Limahl performing the song with a septet of musicians adding the orchestral flourish. “Like most venues, it is currently closed due to COVID and on filming day, we all had to wear masks between takes,” said Limahl about the challenges that faced him and the video cast and crew. “Filming took place over two days, first at the theatre with musicians and then on location in London two weeks later when the Christmas lights had been switched on. The department store Selfridges is name-checked in the song verse so it only felt right to get some shots outside of the store on Oxford Street.”

Watch the official music video for “One Wish for Christmas” by Limahl on YouTube:

A melding of performance with romantic choreography, “One Wish for Christmas” is a short reunion of sorts for Limahl. “One of the song’s co-writers Jon Nickoll of London’s Savoy Hotel, plays piano in the video as he did on the recording,” he said. “The Bashford Twins were on board again as directors after they did such a great job on my ‘Still In Love’ video. It felt important to reflect today’s integrated/multi-racial society and we made a conscious effort to try and represent other ethnic groups. In the video story, two people imagine their possible romance as a series of dances which are old Hollywood in their choreography/style – performed beautifully by Grace Loader and Reece Darlington-Delaire.”

“I love Christmas and some of the great holiday songs like ‘Have Yourself A Merry Little Christmas’ and ‘The Christmas Song (Chestnuts Roasting On an Open Fire)’,” Limahl said, and it had always been a longtime goal to comprise his own holiday song.