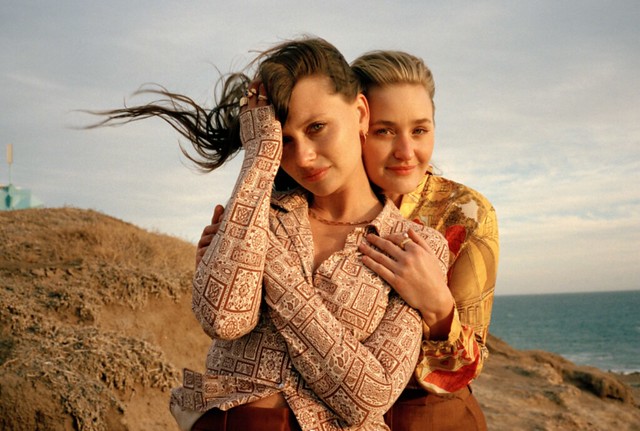 Aly & AJ’s super anticipated new album, A Touch of the Beat Gets You Up on Your Feet Gets You Out and Then into the Sun, is dropping May 7 and recently they released the latest track off it, “Symptom of Your Touch.”

The new song is a haunting slice of indie pop backed by a nostalgic dance production that perfectly showcases the duo’s evolution — embracing their love of everything that makes earworm pop irresistible (the chorus sounds like it was MADE for shouting at the top of your lungs!) while pushing their craft in a noticeably more mature and alternative space both lyrically and sonically.

Stream “Symptom of Your Touch” by Aly & AJ on YouTube:

Aly & AJ have spent over a decade putting an eternal creative truth into practice: you don’t find your voice by waiting around; you create it, by writing through. After rising to fame as teen stars in the worlds of Disney pop and TV sitcoms — beloved right at the cross-section of millennials and Gen Z, as evidenced by the recent runway TikTok revival of their 2007 kiss-off “Potential Breakup Song” — the sisters have quietly worked on songs. They chiseled away at their craft, manifesting themselves honestly.

Their first album in 14 years is called a touch of the beat gets you up on your feet gets you out and then into the sun, which is just right. This long and winding name befits their singular journey through music, a title full of rhythm and poetry, but with an ease and a brightness: All qualities that help define the newly independent sound of Aly & AJ.

Having survived the slick, hyper-manicured pop sphere with their souls in tact, the Torrance, California-born duo –and lifelong musical collaborators — have transformed their sound into something looser and more personal. (Along the way, they produced the 2015 Richard Linklater-inspired film, Weepah Way for Now, based on their own experiences of sisterhood, stardom, and growth.)