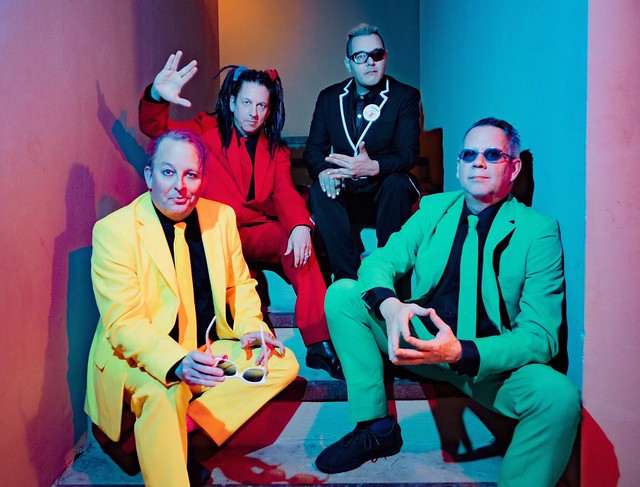 One of electronic music’s most influential bands, Information Society (or INSOC as they are affectionately known) return with ODDfellows (via Hakatak International (digitally on Aug. 6).

The band recently released a single, “Nothing Prevails,” for which they produced a video.

Just as groundbreaking as they were in the early beginnings of New Wave and Electropop, INSOC are breaking ground again with this album. The very first complete album to be released with a headphone version rendered in THX Spatial Audio, ODDfellows takes advantage of the same THX Spatial Audio technology used in gaming platforms to provide audio that sounds like it’s coming from ‘outside your head.’

“We’ve always been a technically adventurous band, and I think this is just another example of that,” said founder/producer/synths Paul Robb about how the album simulates the 5.1 environment. “We like to play around the edges of what’s possible in recorded music, and so we are excited to provide our music to our fans with deeper immersion and a 360° soundscape experience provided by THX Spatial Audio!” (The album will also be available in standard stereo).

Watch the official music video for “Nothing Prevails” by Information Society on YouTube:

A chart-topping band whose experimental hits have incorporated elements of new wave, electropop, freestyle, industrial, and darkwave, INSOC’s new album tackles each of those genres with grace, easing into them seamlessly. “In the band’s original incarnation, we were, as all young artists are, heavily influenced by what was going on around us,” Paul said. “This meant that we were participating in musical (and visual) trends, almost without knowing it. Styles like new wave, electro pop, freestyle, Miami bass, and electro-industrial were the waters we swam in. Nowadays, we aren’t part of any new trends, or even aware of them honestly, so we find ourselves exploring and revisiting what has become our own distinctive style, and there’s plenty of room to play around there!”