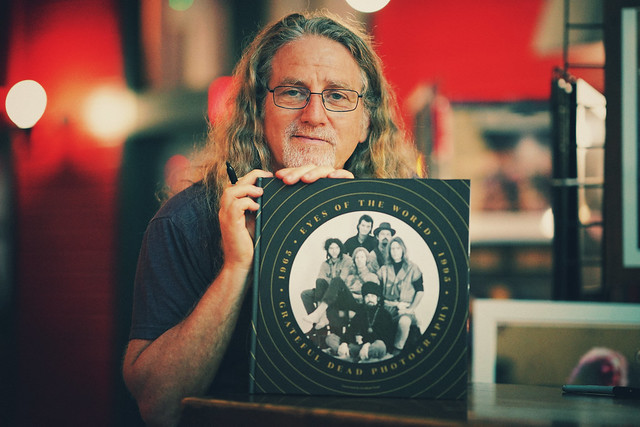 How would our memories serve us in life without the assistance of photography? What would the realm of live music look like without the historical record provided by the photographs that serve as hard evidence of what has and who have come before us?

Jay Blakesberg knows from more than 40 years of experience that the duty of a live music photographer is, as he refers to it, “visual anthropology.” A native of New Jersey born in 1961, Jay is a guiding force in the world of both live music photography and musician portraiture, having worked with a staggering list of some of the most well-known musicians on the planet and seen his photos published across a universe of media.

Most remarkably demonstrated by his long haul with one of the most important musical acts of all time, Jay recently brought his incredible portfolio of work with the Grateful Dead in slideshow form to The Birchmere in Alexandria for an in-depth presentation that highlighted his talents as both a photographer and a relationship builder who’s natural and down-to-earth approach invited countless musicians to show themselves to the world through his lens.

Fans of not just the Dead but all forms of music gathered in the foyer beforehand to take a peek at Jay’s photographs and buy one of his books — including his most recent, a collection of his and other’s images of the Dead titled “Eyes of the World – Grateful Dead Photography 1965-1995.”

“Rock-n-roll really does give our souls emotional salvation,” Jay told the audience on June 9 as he shared his path to discovering the Dead — a Jersey kid who like many was trying to find something in life to inspire him. Having taken his father’s Pentax camera at a young age to nearby concerts, capturing the likes of Eric Clapton and Crosby, Stills, Nash and Young in his late teens, Jay was inspired to photograph the Grateful Dead upon hearing their music and then seeing them for the first time, a show at the Meadowlands in 1978 that became a life-altering experience for him.

Everyone at the time, he said, was searching for a “zeitgeist.”

“For me, it was the Grateful Dead,” Jay explained as he unveiled — with nothing to hide — imagery of his time as a young hippie in the ’70s and early ’80s.

And so, Jay began shooting Grateful Dead shows as much as he could as he became a serious Deadhead himself.

But, like most successful people, he had to overcome his share of challenges, which he covered in entertaining detail and while offering up his wisdom gained from what he now views as “adolescent stupidity.”

“Has anyone here ever done something so stupid that you’re just glad you’re still alive?” he asked. “We had no internet to save us back then.”

After being arrested on LSD-related charges in 1981, Jay was sentenced to 5 years in prison, but that was eventually reduced to 12 months given his lack of a criminal record — and the time was ultimately reduced to nine months thanks to his good behavior.

Of course, he shared photos at The Birchmere of his time behind bars. He got through watching episodes of Soul Train (“so good,” he added), growing his own sprouts (and inspiring/teaching others to do the same), and by writing letters to friends and relatives that he would first pen into a journal that served as a record of his imprisonment experience.

As if by destiny, when he got out, he was right back behind the camera and, before long, he packed his bags and migrated west, where he would end up attending Evergreen State College in Olympia, Washington, and of course studying photography and completing internships that would prove valuable to his road into the profession.

Before long, he moved again and was shooting music in San Francisco’s Haight-Ashbury, a neighborhood whose identity was developed through the presence and music of the Grateful Dead.

Jay referred to his days of touring and shooting the Dead in the 70s, 80s and into the early 90s as “a time and place that will never happen again.” And he, always clutching one of his cameras, was proud to be there to document what he knew and believes to this day was a special culture.

“No one was dancing to be on Instagram,” he said. “We were in the moment.”

Jay took the audience through his progression from one of many people shooting the Grateful Dead to becoming a house photographer at San Francisco venues and then through a series of somewhat coincidental photo shoot opportunities with the Dead or individual members of the band—relationships that began to flourish.

Attendees got to see the members of the band in their most natural form—guard down, laughing, enjoying their time together as innovative musicians at an important time in American history. We saw Jerry Garcia, Bobby Weir, Phil Lesh, Bill Kreutzmann, Mickey Hart, Brent Mydland, songwriter Robert Hunter, and other members of the family at their very best — bright eyed and engulfed by the thrill of their own creativity.

Those in the room also got to see Jerry at his worst — a difficult glimpse into the final months of a man who was struggling with health problems related to years of drug addiction.

Explaining his own healthy choices and his career path, Jay was wise enough to not limit himself to what would later be called the “jam band” scene by working with bands producing alternative rock, punk, rap and a wide range of sounds that, at the time, didn’t necessarily have lots of cross-over fans from other genres.

But Jay recognized the power of the photographic image, what it stood for and what it did to his spirit when he saw one of his photos used in a major magazine or as album artwork.

“Seeing your photo on a printed page was pretty fucking mega,” he said, sharing his early credits in the likes of BAM Magazine, Rolling Stone (his first being November 1987), The Golden Road magazine, Relix and many more.

He shared earnest, insightful commentary on Jerry’s drug use and the ensuing deterioration of the man himself and, along with it, a fading of the original Grateful Dead’s sound that actually helped inspire Jay to turn his camera to the audience — “where the magic happens,” he told the audience.

His recent experiences at live concerts, he said, validated his thoughts on the importance of live music to us as human beings.

“Who remembers going to see the Grateful Dead and having your mind fucking blown and being with your favorite people?” he asked.

And while not everyone at The Birchmere that night might have been able to share in those memories, Jay’s eye-popping photography — subtly showcasing his different styles and “periods” over the years—shared a fascinating, detailed look into the world of the Grateful Dead like no other photographer or music historian could ever hope to provide.

Jay’s body of work now includes at least 1,000 credits in Rolling Stone, with 300-plus paid assignments under his belt, and he has taken pictures for a list of musicians that is staggering: Tom Waits, Neil Young, Taj Mahal, Primus, Red Hot Chili Peppers, Dr. Dre — the list goes on and on and, as Jay pointed out to his audience, he really had no musical boundaries.

The culmination of 40 years of being on the bus with the Dead, Jay’s journey with the San Francisco legends provided the Dead with an invaluable stream of photographs — vital documentation for a band that would go on to be a guiding light for how musical group’s operate their business. And for Jay, the time with the Dead provided an avenue to serve the many talented musicians who’ve been fortunate enough to get to know him.

“Create value, find meaning and fulfillment,” were some of his parting words to those at The Birchmere.

Parklife DC caught up with Jay at The Birchmere before he presented, giving us a chance to take a deeper look into his most recent tour, which he wrapped up that night in Alexandria. Stay tuned for more from our evening with Jay Blakesberg.

To learn more about his work and his published books, visit his website at blakesberg.com.

Here are some pictures of Jay Blakesberg presenting his pictures at The Birchmere on June 9, 2021. All photos copyright and courtesy of Casey Vock. 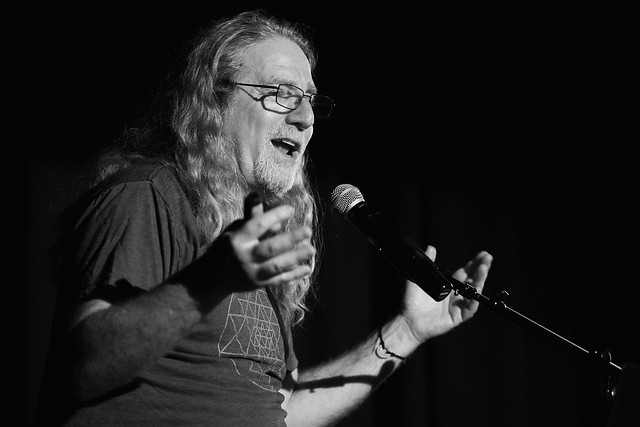 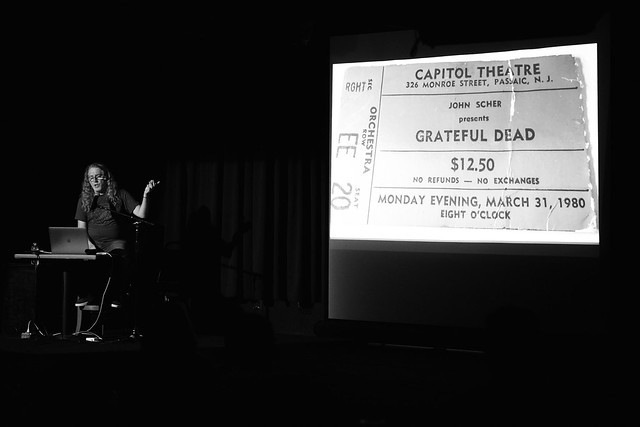 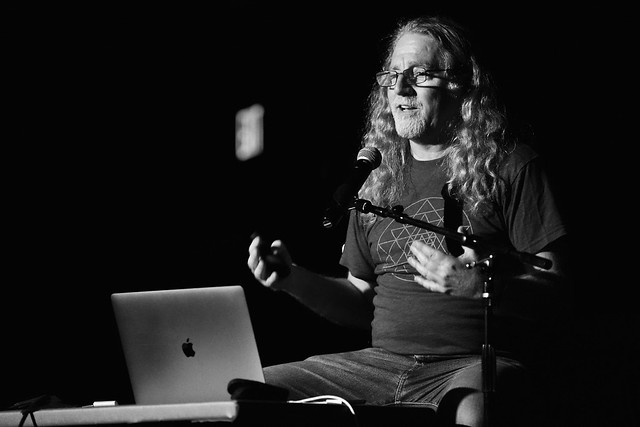 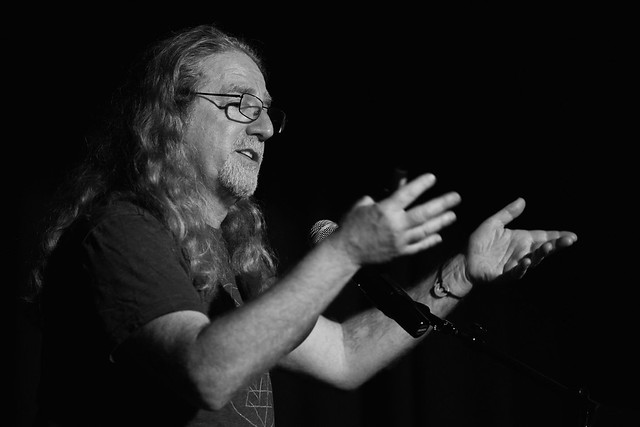 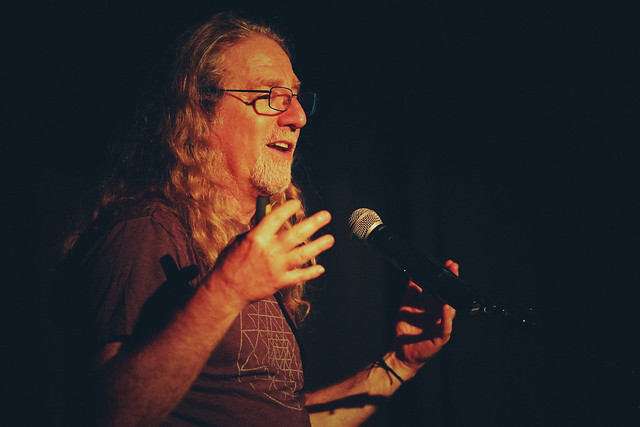 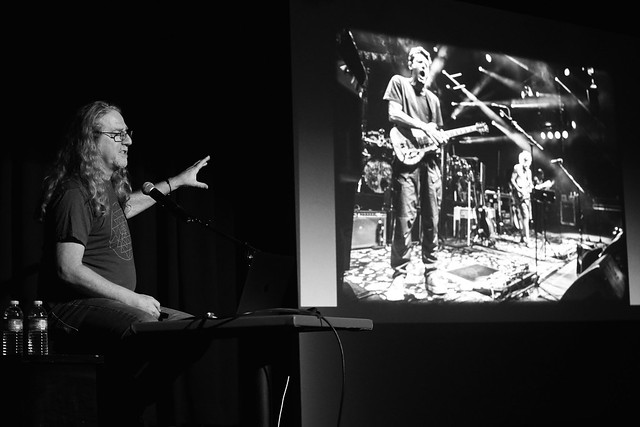 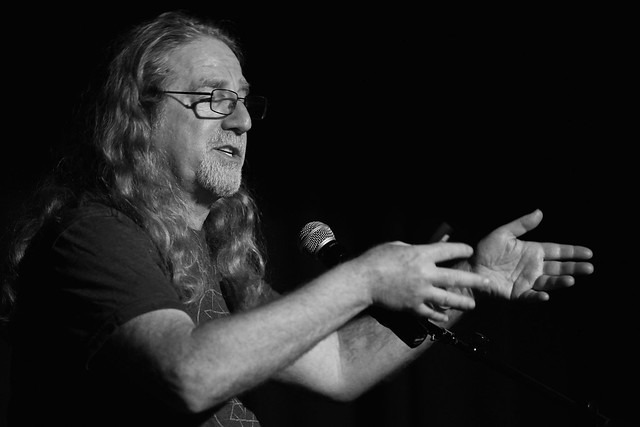 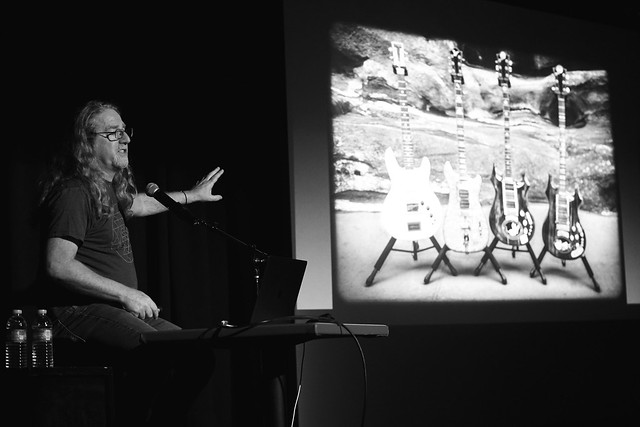 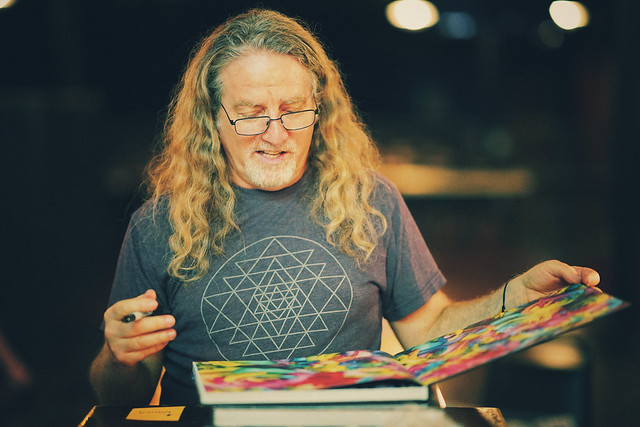