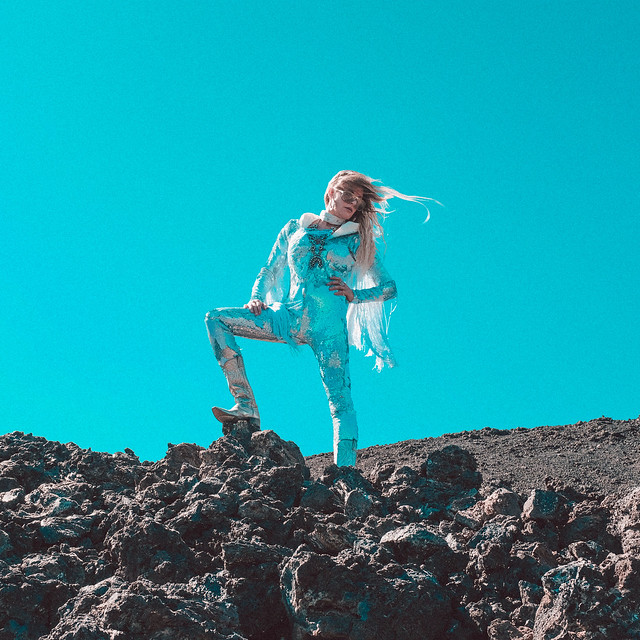 Elizabeth Cook and Waylon Payne had two of my favorite albums released last year — Aftermath and The Queer, The Harlot, the Pusher and Me — so I was extremely excited about Saturday evening’s show at the Union Stage. Payne opened the show with a 45-minute solo acoustic set, and Cook headlined with her full band, Gravy.

Payne has been described as “outlaw royalty.” His father, Jodi, played guitar in Willie Nelson’s band and his mother, Sammi Smith, won a Grammy for Best Country Vocal Performance with a cover of Kris Kristofferson’s “Help Me Make It Through the Night.” As he does every night, Waylon played that one, dedicating it to Kris and to his late mother.

Most of Waylon’s set consisted of songs from his latest album. About 18 years ago, he released his first album, and then went into acting for a bit, appearing as Jerry Lee Lewis in the Johnny Cash biopic Walk The Line. In his own words, he was “off the grid” for a while as he struggled with an addiction to methamphetamines. When his mother died, he “went over the deep end.” The first song of the night — as well as on the album — “Sins of the Father,” deals with his relationship with his father, and how his best friend having a child profoundly changed his life.”

Stream “Sins of the Father” by Waylon Payne on Spotify:

As Waylon made his way through the set, playing “Dead on the Wheel” and “Born to Lose,” he expressed his gratitude for how his music has finally broken through. Though he has written for and with a number of artists, most prominently Lee Ann Womack on “All The Trouble,” he’s not been publicly visible much in the last decade. Hearing himself performing his own songs on radio and seeing “Santa Ana Winds” crack a million streams has, he said, been an edifying experience.

Waylon’s set was loose and easy. He came out barefoot because, he explained, his shoes didn’t match his suit. He’s clearly a born entertainer, engaging with the crowd and taking requests, including “Old Blue Eyes” and “Pretender.” He did seem slightly perplexed when someone requested “Shiver,” which he’d played just a few minutes before. He concluded with “Back From the Grave,” and received the rare standing ovation for an opener.

About 15 minutes later, Elizabeth Cook took the stage with her full band to rock the house. Her outfit almost has to be seen to be believed, but I’ll do my best to describe it: a shining silver spacesuit-themed get it up covered with stars and planets, and a black fanny pack that I at first thought was a codpiece. Bowie comparisons have been made for Elizabeth’s stage wear, and that’s valid, but it’s also totally her own thing.

A native of Wildwood, Florida, Cook began her career solidly in the country genre.  She’s appeared on the Grand Ole Opry some 400 times, the most by a nonmember. Like many of the artists who broke out in the mid-late ’80s — think Steve Earle, Rodney Crowell, Dwight Yoakum — there’s always been a lot of rock to her country roll. Even on her early albums, the guitars were already pretty loud. Exodus of Venus, released in 2016, saw her move more into the space of blues-rock, while still hewing to her country roots.

With Aftermath, Cook has gone all the way rock and roll. Her band Saturday was a classic rock four-piece set up, and there wasn’t much twang outside her of decidedly Floridian drawl. She opened with the hard-rocking “Thick Georgia Woman,” which is interesting in that a lot of the lyrics are the things you might expect to hear in the music of an all-male band from the late ’70s or early ’80s. When Cook sings it, though, it has the quality of a woman celebrating other woman, and it takes on a whole different meaning.

“Perfect Girls of Pop,” a single off Aftermath, is a hard look at how the music industry treats young women, on the demands it places for them to be perfect and sexy and pure, all at the same time. “Stanley By God Terry” shows off her storytelling chops, as she weaved a tale of a love triangle. “Half-Hanged Mary” is about, in her own words, “a woman who was just misunderstood.”

The loss of her parents’ haunted Cook on Exodus of Venus, and still does with the material on Aftermath. She expressed this with “Daddy I Got Love For You.” She further went into her oft-troubled family with “Heroin Addict Sister” from her 2010 album, Welder. Even though she just put out a new album last year, she’s already working on new songs, one of which, “Lightly,” is about a different sister.

Cook’s set included another new song, “Feverfew,” as well as “Bayonette” and “Slow Pain.” She described “El Camino” as being “a song about a car that really creeps me out.” She closed with “Sunday Morning.”

In addition to writing and performing music, Cook also hosts a show on Sirius XM and a TV show about fishing. These opportunities opened up to her after she dazzled both Dave and his audience when she appeared on Letterman, displaying wit, humor, and charm.

Watch that famous appearance by Elizabeth Cook on the Late Show with David Letterman on YouTube:

Elizabeth is a beguiling performer, as able to carry the audience in her hand whether she’s speaking or singing. For her encore, she came out solo, treating the audience to the mostly spoken word piece, “Mary, The Missing Years.” It’s a sort of a companion piece to the late John Prine’s “Jesus, The Missing Years,” and is every bit worthy of him.

At that point, her band came back out, and she welcomed Waylon back to the stage. They duetted on “All The Trouble,” which was a real highlight of the show, and Waylon stuck around as she finished the evening with “Balls,” a song about how “sometimes it takes balls to be a woman.”

If you wanted to hear some great songs and just rock out, Saturday evening was a hell of a show. It’s great to have live music back in our lives, and it’s great to have the chance to see two artists as phenomenally talented as Waylon Payne and Elizabeth Cook.