Two of the most unique singer-songwriters working today graced the stage of The Birchmere recently — Todd Snider and Aaron Lee Tasjan. Both, in some sense, are part of the alt-country/Americana scene, though putting them into this genre box is far too reductive.

While both draw on classic songwriting traditions, they put a modern — perhaps even a postmodern — twist on them. They share a delightfully warped, witty sense of humor, perhaps connected to their fondness for psychedelics.

Both played solo on Aug. 31 at The Birchmere, with Aaron opening the show with a 30-minute set. If you’re unfamiliar with his work, Aaron was something of a teenage guitar prodigy, winning competitions and earning a scholarship to study music after high school. Following his muse, he decided instead go directly into a career as a professional musician, and his skill with the guitar earned him a spot in an incarnation of the New York Dolls. Later, he embarked on a solo career as a singer-songwriter, and he’s released four albums since 2015, with the latest — and perhaps the best — Tasjan! Tasjan! Tasjan! — coming out earlier this year.

It’s an important part of Aaron’s biography that he is an out and proud gay man, but I would suggest that it’s not the most important part. As someone who proudly claims the mantle myself, Aaron — and this is just is true of Todd as well — is, in the best sense, a “weirdo” or “oddball,” and, as you can see in the photos taken by my associate Casey Vock, they’re putting it right out there with their personal style.

Aaron opened his set with “Get Gone,” followed by “Cape.” The latter, he told the audience, is about Kevn Kinney, the leader of his favorite band, Drivin N Cryin. Between songs, Aaron spoke of his first encounter with Todd’s music, when he heard the song “Beer Run” on the radio while mowing the grass at a golf course in New Albany, Ohio. (Aaron is a fellow Buckeye State native, growing up in the Columbus metro area.)

The most humorous song in Aaron’s set was “I Love America Better Than You,”  a delightful satire of patriotism that he wrote on one July 4. The most eerie came immediately before it, “Strange Shadows.” He introduced “In The Memphis Rain” with a story about the night he wrote it, when he and fellow singer-songwriter performed for a crowd of one, an elderly woman dressed in leopard-print pants. Despite the disappointing turnout, he found inspiration in this vivacious, creature who he last saw exiting the club, hopping on the back of a motorcycle that pulled up,  and riding off into the rainy evening.

Taking advantage of the piano onstage, he played “I’ve Got a Feminine Walk,” and finished up his set with “12 Bar Blues,” which he described as “a song that sounds like the blues about twelve bars I’ve been to.” It was a terrific set, and the crowd was totally into it, rewarding him with a standing ovation.

On his podcast, Walking the Floor, Chris Shifflett (of the Foo Fighters) made the observation that Todd Snider is a very bright and accomplished artist who is playing a screwup character. His songs often double-down on the irony, like his classic “Alright Guy,” which depicts a man who has no self-awareness of his own atrocious behavior. In this particular rendition of the song, he interspersed a bizarre, fascinating story involving a hospital patient, a liquor store, and the cops that I cannot possibly do justice to.

The stories between and, sometimes, in the middle of Todd’s stories are as much an attraction as the songs themselves; he released a well-received live album called The Storyteller some years ago. The stories range from the bizarre to the hilarious to the deeply affecting. The most affecting story he tells pertains to “Play a Train Song,” a tribute to an man who was something of an East Nashville institution, who would deliver pot to the various music venues in the neighborhood and demand that whoever was on stage, “Play a fucking train song!” As Todd tells it, bands would immediately stop what they were playing and launch into one.

“Waco Moon,” he explained, was originally written just for Billy Joe Shaver after his son Eddie died of a drug overdose. He didn’t intend to release it, but Billy Joe — an excellent judge of songs — insisted that he put it on his album.

Todd has admitted that he sometimes changes the stories up, and that’s just fine with me: Never let the truth get in the way of a good story. I’m slightly dubious of his claim that “Just Like Old Times” is being made into a movie, while I completely believe that he did trip balls and going walking in the woods looking for inspiration leading to “Just Like Overnight.”

This fondness for mind-altering substances was a recurring motif. “I Been Framed,”  he told the audience, was written from the perspective of the first dollar bill that had been exchanged in a bar and was displayed on the wall. Todd walked into that bar, he told the audience, high on mushrooms, sat down and watched a TV news story about Britney Spears. Then, he saw the dollar and it all clicked. In the prelude to “Ballad of the Devil’s Backbone Tavern,” he recalled the time when a he was mistaken for being homeless and surrounded by a prayer circle. The story takes a strange left turn when a family comes up, and, in his altered state, Todd believed that he was communicating telepathically with a little girl.

I’d heard the John Prine story that was told in the encore before, but it’s always charming, and it speaks to the man’s best qualities. Todd was opening for John in Europe, and they had just been picked up after a long flight. As they were headed to their destination, John suggested that they needed to drive one way, but the young driver insisted that they needed to go in the opposite direction. Two hours later, the driver admitted his mistake, and turned the car around. At this point, there was a palpable atmosphere of tension from everyone except John, who, without looking up from his newspaper, said, “It’s fun to drive around in Europe.”

After telling that story, Todd closed his show with “Handsome John,” which he wrote after Prine passed away in early spring of 2020 from Covid. Notably, it was the only track from his recently released album, The First Agnostic Church of Hope and Wonder; he mentioned that the songs don’t really lend themselves to live performance.

I can only hope that this article gives you some sense of the mirth and magic that Aaron and Todd brought to The Birchmere this week. No write up can really do justice to their talents; you really have to see them, live and in person, for yourself.

Here are some pictures of Aaron Lee Tasjan and Todd Snider performing at The Birchmere on Aug. 31, 2021. All photos copyright and courtesy of Casey Vock. 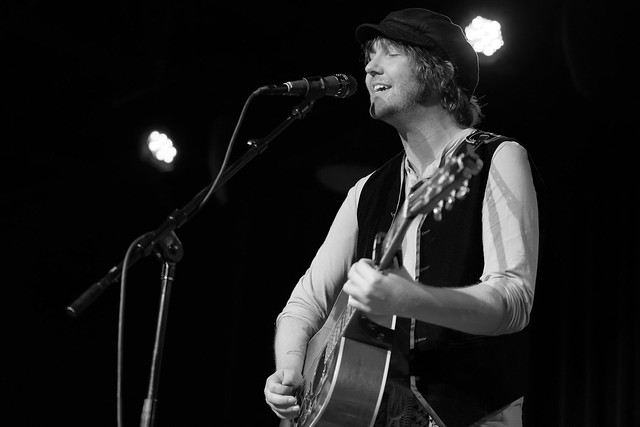 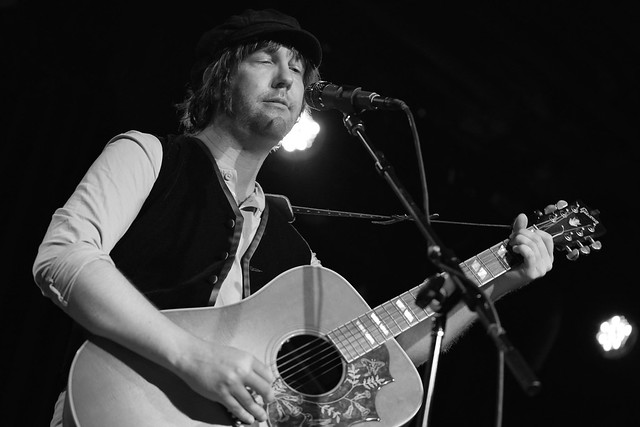 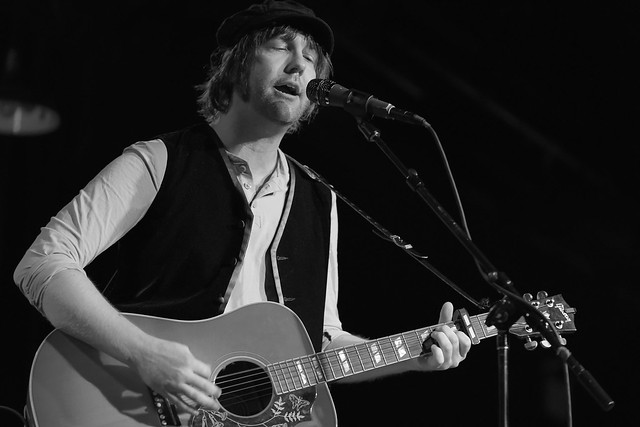 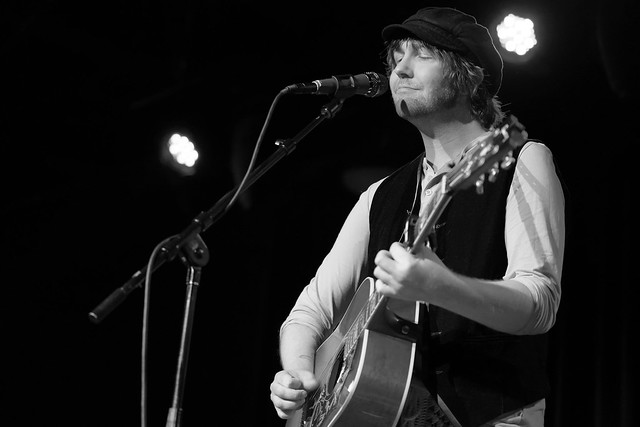 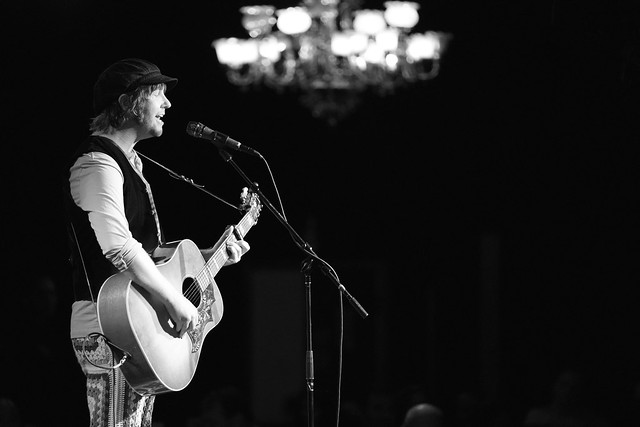 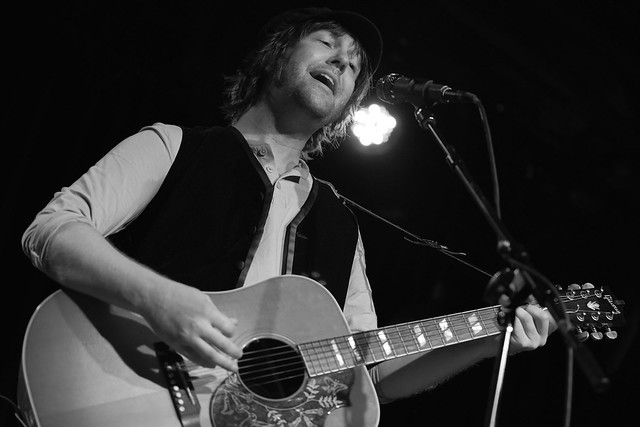 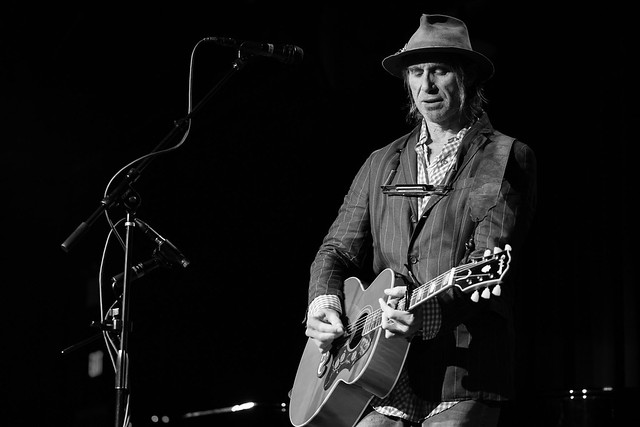 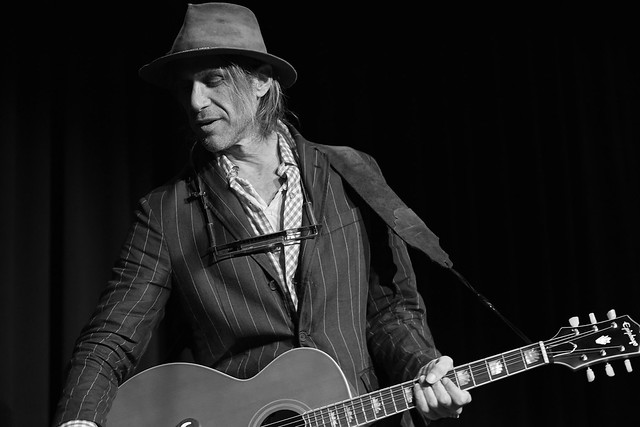 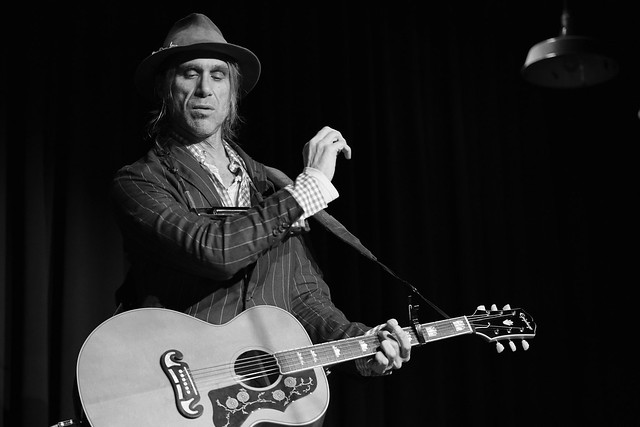 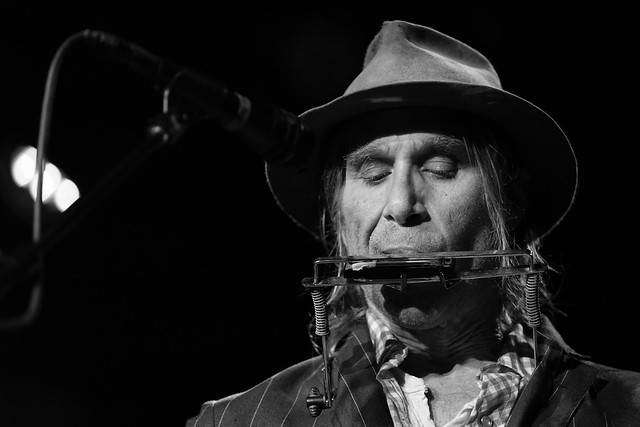 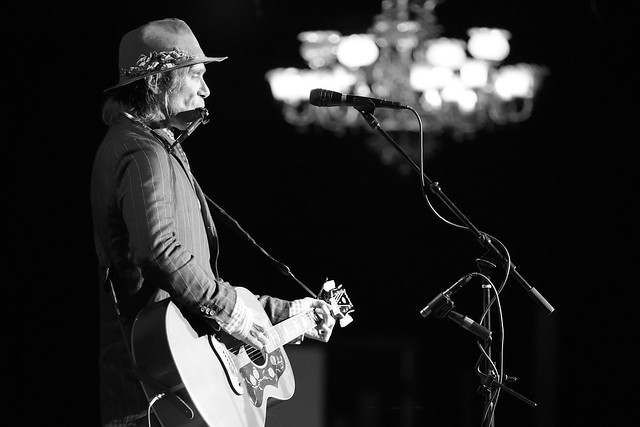 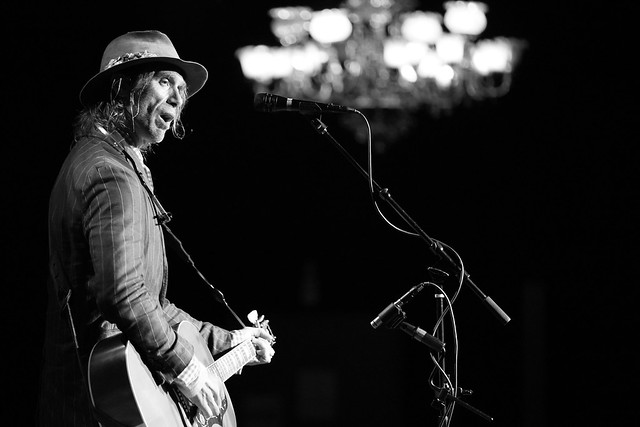 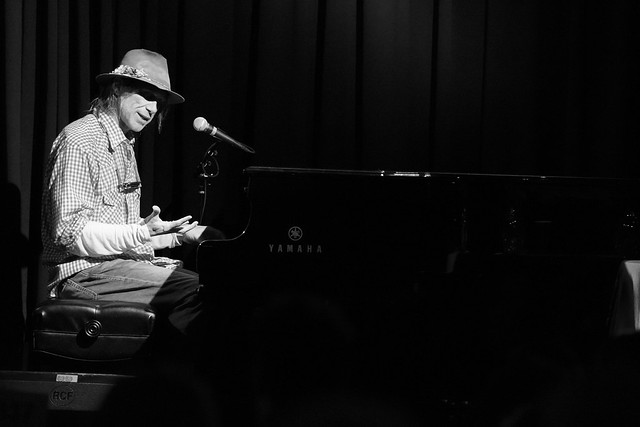 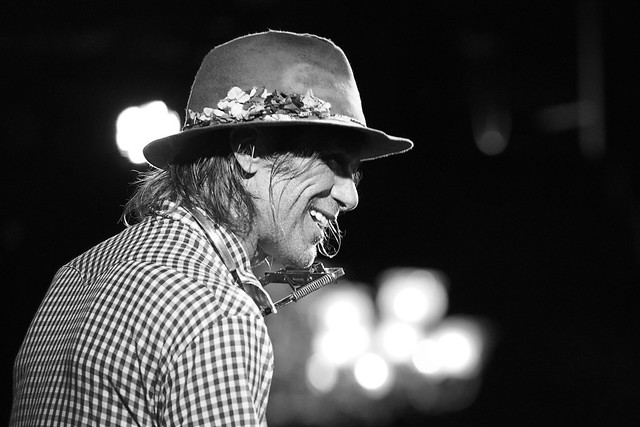 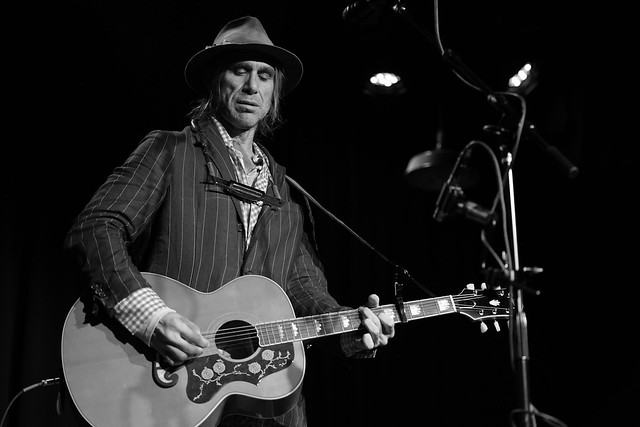 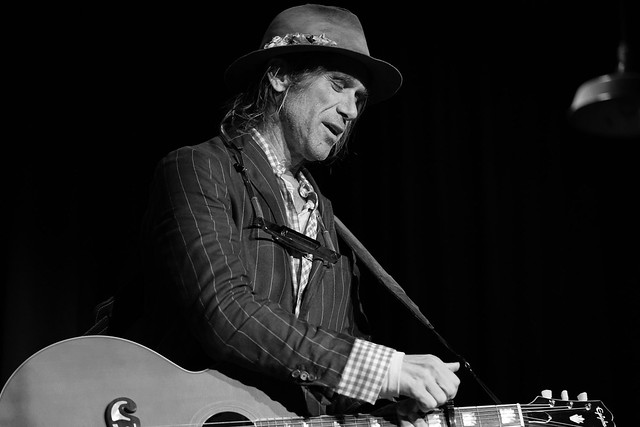 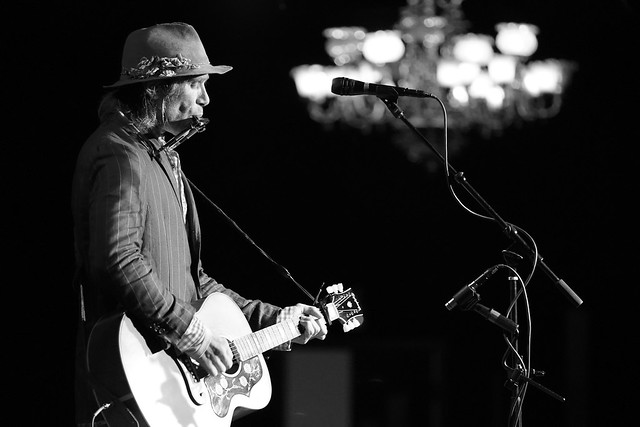 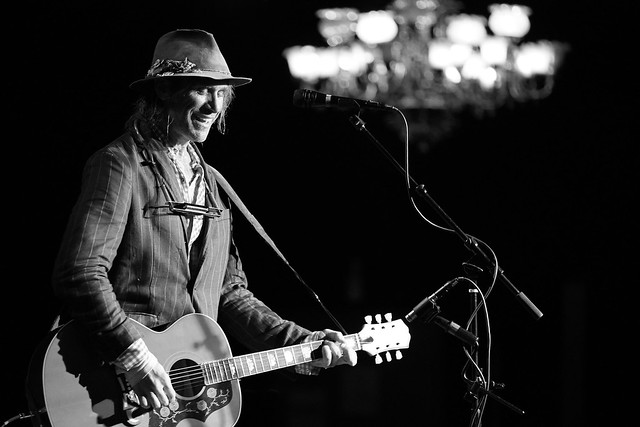 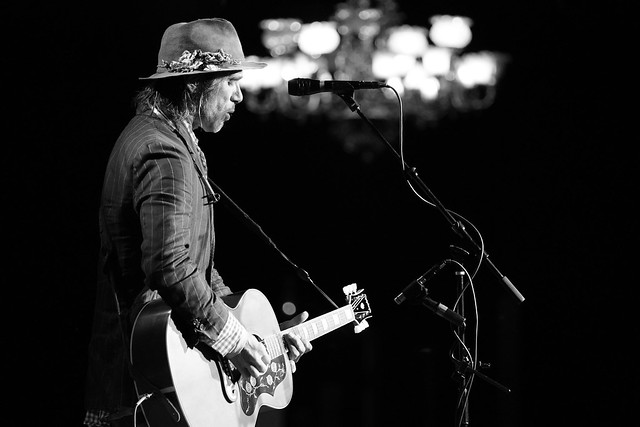 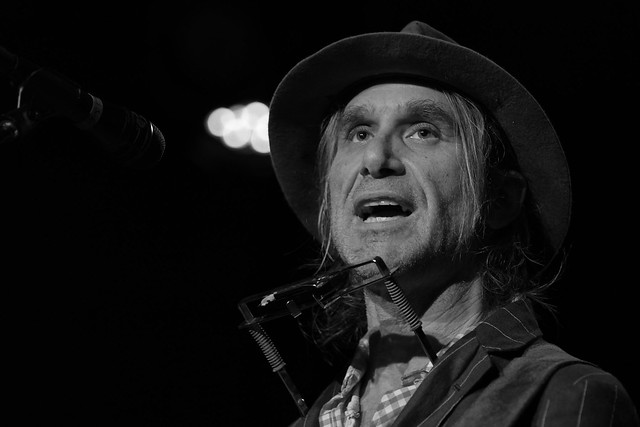