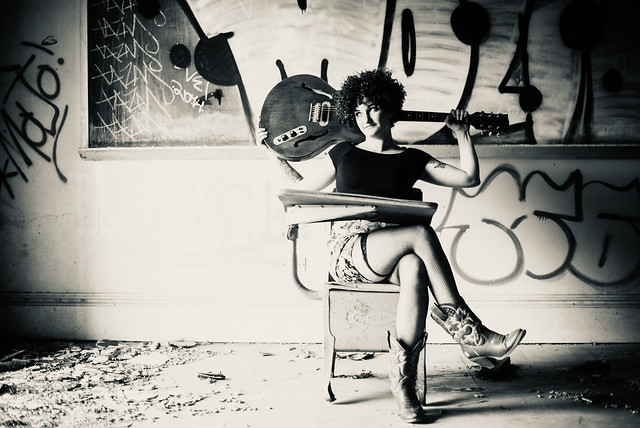 Carsie Blanton’s show at The Hamilton Live on was 18 months in the making. On Friday evening, she finally made it to the venue, and had a whole new album of songs, Love & Rage, to share with the audience. The title of the album, she told the audience, is a statement of purpose, a summation of the two themes that run through her work.

Before she took the stage, Philadelphia folk-Americana artist Chris Jasper delivered a terrific opening set. I wasn’t familiar with Chris before the show, but I really enjoy his music, which has a haunting, spectral folk-Americana vibe. In addition to a number of his original songs, he covered Bruce Springsteen’s “State Trooper,” really doubling down on the song’s menace.

Blanton is the latest link of a chain of folk-influenced singer-songwriters who combine personal exploration with political activism — hence the two themes intertwined in her work. Her musical style isn’t just limited to folk: There are elements of classic jazz and pop, especially Nina Simone, in her work. This side of her wheelhouse was on display in her cover of the classic standard, “As Time Goes By.”

Love & Rage was written during the pandemic, and the songs reflect that. “Down in the Streets” shows us the protests in Philadelphia. A certain resignation can be felt in “Party at the End of the World,” about which Carsie commented, “We had a good run, so let’s just party.” “That Ain’t the Way We Do It,” on which she invited the audience to sing the chorus, is directed at fascists.

During the pandemic, Blanton relocated from New Orleans, where she’d lived for eight years, to the northeast, to be closer to her band. She grew up in the Shenandoah Valley, where she even had a pony named Sparky, which she writes about in “American Kid.” Her feelings for her longtime home influenced many of the songs in her set, including “Goodbye New Orleans” and “Ain’t No Sin,” which she wrote an old church.

A bluntly honest approach to relationships and sexuality is present in many of her songs. “Jacket” is an honest take on masturbation. “Harbor” captured “the ambivalence you haven when you first fall in love,” while “Vim and Vigor” and “Hot Night” took the set in a steamy direction. Introducing “Gonna Die One Day,” she told the audience it was about a terrible pickup line a guy had tried on her: “You’re gonna die one day, you might as well enjoy yourself while you’re here.” “Dealing with the Devil” married the personal and the political in one song. Blanton wrote it “about a scoundrel in my life, but he was only worth one verse, so I wrote it about Mitch McConnell instead.”

Like many public personalities — and this is especially true for women — Carsie has faced her share of criticism on the internet. “Fat & Happy” is a response song, a kiss-off to am eminently unreasonable opinion.

Two of the later songs in the set dealt with losses we’ve suffered this past year and a half: a song dedicated to the late John Prine, who is one of her major influences (as he is for so many contemporary songwriters), and “When Somebody’s Gone.”

The set wrapped up on a note of encouragement and inspiration, closing with “Buck Up” and “Be Good to the People.” For her encore, Blanton wished the audience “All My Love.” As she was wrapping up her set, she explained that she sold merchandise on “What You Can Pay” basis, which aims to make it affordable to a wide range of fans.

Carsie really connected with fans, shouting to a number of folks in the audience with dedications. She had terrific energy, and spiced up the songs with just the right amount of stage patter to keep it interesting. After 18 months of being shelved, this show proved to be worth the wait.