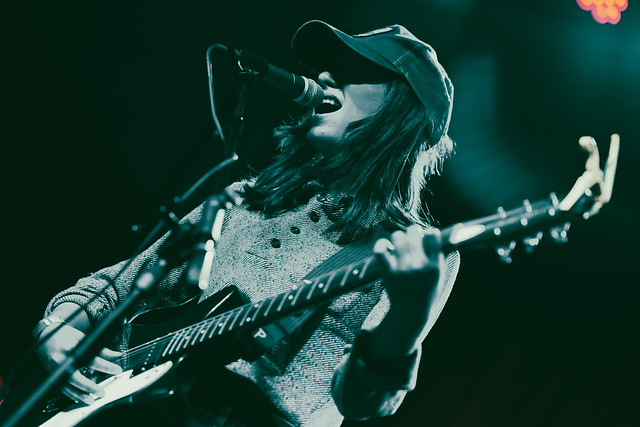 Perhaps teaming up is a smart move for two acts who were sharply on the rise when the pandemic hit, and, as a credit to their work ethic and dedication to recording and playing, they still are. So why not join forces and likely gain exposure to new fans — the fans of your touring friends — in every city you play?

Formed in 2010 at the University of Notre Dame by guitarists Julia Steiner and David Sagan, Ratboys is a rock band based in Chicago that earned a great deal of praise in national music media with its second studio album, GN (2017), and later, its third, Printer’s Devil (2019).

The band’s character is arguably most distinguished by Steiner and her flexibly mesmeric, tender voice that can resonate as undeniably adorable, but can arch with intensity that becomes unnerving, even startling. This past Tuesday night at Songbyrd, with her ballcap yanked down so far you could barely see her eyes, Julia appeared to be pulling from emotions from deep within herself to apply those incredibly lonesome, longing textures to her words.

Fanciful in appearance and luminous in spirit, Julia manages to bottle up her explosiveness as a guitar player, but she lets it out in spurts over the course of a show and by the end of it, she’s wielding it like a weapon that could do a lot of damage — or maybe just produce awesome noise.

Having known David since their college days, Julia seemed to lead the band with little effort, or perhaps she didn’t need to lead as much as lean on a sonic connection between herself and her longtime friend—a thick, powerful lefty who tore into his guitar by bending down low—an athletic stance, almost like a long-snapper—and digging in for “Printer’s Devil,” the title track from the 2020 release.

Along with David, bass player Sean Neumann and drummer Marcus Nuccio got their hands dirty quick and enthusiastically in showing their natural ability to build verifiable intonations around or adjacent to Julia in a way that creates a remarkably raucous atmosphere of collision or competition. Meanwhile, the catalogue of dynamic songs shed light on the bands’ influences of indie rock, punk and more from the last three decades.

“I Go Out At Night,” from Printer’s Devil, is and was at Songbyrd a prime example of how Ratboys blends those crashing, volatile sounds together in an unthinkable harmony, all ramping up after an introductory bass line and lyrics that wistfully recalled the garage and grunge sounds of the early 90s.

Watch the official music video for Ratboys’ “Elvis In The Freezer” on YouTube:

The hit “Elvis is in the Freezer,” a song Julia explained was about a deceased cat, let her use her whisper to tell that story and slip those light accents inside a whirlwind of bass, guitar and drum ascension

She introduced “Charles Bernstein” from 2015’s AOID, another album praised by critics, referring to the track as the band’s “trippiest” selection,” before leading the rhythm of this unforgettably catchy track weaving her voice into and out of the groove, and Sean sliced an tangential set of notes through a measure throughout this tune to give it that much more character.

“The Stanza,” with its gripping, marching bass steps and subtly intricate drum work in the opening, created an explorative vibe as Julia took us on a ride through the back of her mind, where she sang about making poor decisions as a high schooler, thoughts about famous male leaders, and more darkness.

“Key,” might have seen Julia at her best, and with range too. This smooth jam was boosted by a delighted guitar loop inside of a tightly woven tune where she used her volume in waves to carry the song toward a warm destination, with all four instruments ambling down the same path together.

“Go Outside,” recently re-released on Happy Birthday, Ratboy, reveals the purity and beauty of Julia’s voice, an Americana melody with a touch of sass. It’s hard to forget a voice like hers, singing lines like these: “And I wanna love you ’til the end. I wanna float off with the angels and pick a fight and win. I wanna love you ’til … ‘Til thе end.”

“We saved the loudest for last,” Julia cracked before launching into a two-song segue starting with “Alien With A Sleep Mask On,” a Ratboys fan favorite featuring an epic guitar jam that gave the band members a chance to totally let loose—horseplay on stage, make believe sword fights, manipulating distortion, and more, before going directly into “Look To,” another tune that morphs into a battle of soaring, screaming electric riffs that left the crowds’ ears ringing to close the set.

Mixing what hits as an ’80s or ’90s pop vibe lyrically with some of the edgiest, most unpredictable compositions, Ratboys helped break in the new Songbyrd in fashion and satisfied fans who were supposed to see the band at the venue’s former location before the pandemic changed those plans.

And this night proved to be a two-for-one bonus, as Ratboys played their set following an outstanding one put on by Wild Pink, a band formed in Brooklyn in 2015 and made up of musicians from Florida and Western New York. It’s also a group that Julia referred to as “the best tour partners” Ratboys has had, adding that she and her bandmates felt relieved to be “vulnerable and goofy” with the members of Wild Pink on the road.

Led by guitarist and songwriter John Ross, Wild Pink — like Ratboys — received positive reviews of their early offerings and have toured hard to support those efforts.

Illustrated by broad, spontaneous and defenseless tones and lyrics, Wild Pink’s first three albums have—as other writers have pointed out — followed John, a native of Florida, as he’s reached the coming-of-age chapter(s) of his life. And the tracks from the self-titled 2017 release, those on 2018’s Yolk In The Fur and on this year’s particularly well received A Billion Little Lights haul passion and gravity via progressively unique routes.

Attendees at Songbyrd were given a dose of Wild Pink’s sophisticated songs via the opener, “The Wind Was Like A Train,” a breathtakingly gorgeous song that pumps and advances into a space that some musicians look to avoid—mysterious words you don’t need to totally grasp to relate to, over a fleeting combination of strings and synthesizer that are immediately, almost riskily emotive and raw.

John’s voice goes beyond soothing, essentially becoming therapeutic as his words pour out and his abstruse guitar chords create an aura of contemplation, reflection, longing and hopefulness. He is relaxed, gentle and communicates in a way that can be construed as kind and maybe even generous to bass player T.C. Brownell, drummer Dan Keegan and steel guitarist Mike Brenner.

It was in the opening that the band’s newest addition, Brianne Peterson, quickly and meaningfully made her presence felt.

Playing only her third live show in her lifetime, Brianne — another Western New York native — added an incredible layer of sound to Wild Pink’s songs that is typically hard to recreate in a live setting. To handle the complexities of a track like “The Shining but Tropical,” the third song of the night, Brianne showed a focus and determination to make the music as close to perfect as possible. And you could see her confidence grow, too.

Another song with signature Wild Pink character, “Oversharers Anonymous” should be on the world’s pandemic soundtrack. Blending country music, pop and progressive rock, and lyrics that speak to the past, present and future, this song was performed in stirring, agonizing and exhilarating fashion. And if you couldn’t feel it, you could see it in how John and the rest of the band lit up together at its close — well-earned satisfaction.

Treating the audience to “Family Friends,” Wild Pink shared another one of its tracks that feels designed from a dream, expressed by a hypnotic rhythm and with lyrics that will hopefully one day be widely appreciated for their delicacy and their brilliance: “Lights spin around, like stars that fall down. Come back home. Dream all night. Hold on tight. Stay right here. Blood sisters. Dazed and pure.”

“You Can Have It Back,” a euphoric look at overcoming the disappointment of heartbreak, played out as a healthy ride to a better place, and later, “Pacific City” rang clear, virtuous and uplifting — another inviting track that will help Wild Pink attract more listeners.

Closing with “Lake Erie” from Yolk In The Fur, Wild Pink took their modulation up notch, as this Great Lakes-inspired tune drives with an antidotal, reconciliatory quality, only made that much more profound by John’s voice, which is consistently supple and genuine. The rapid swirling of instruments, like clouds forming a lake-effect snowstorm, echoed upward and onward, and somewhere in it all offered an optimistic acceptance at whatever the future holds.

While fans at Songbyrd taking in this double-header (and this was actually the second night of this lineup) could have all night long debated in their own minds the music genres that influenced these two bands, how to “define” their sounds or how to categorize them, what they hopefully appreciated was the opportunity to see two acts who should be considered refreshingly approachable even for those unfamiliar with their music.

Here are images of Ratboys and Wild Pink performing at Songbyrd Music House on Sept. 14, 2021. All photos copyright and courtesy of Casey Vock. 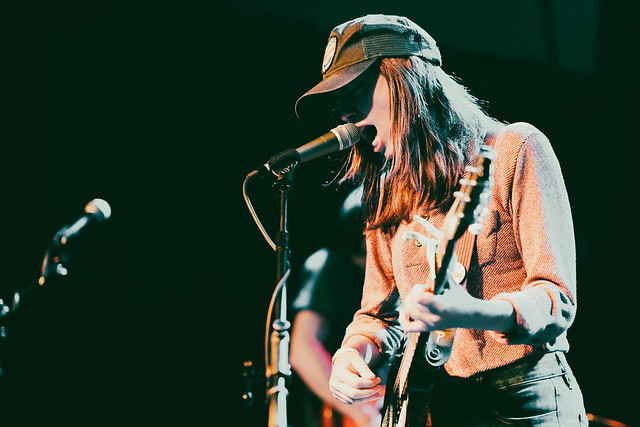 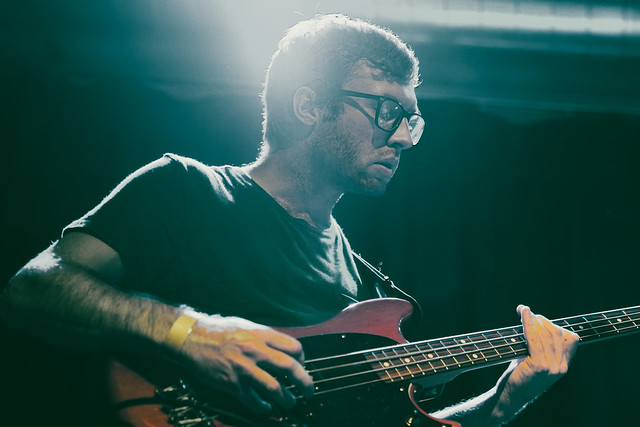 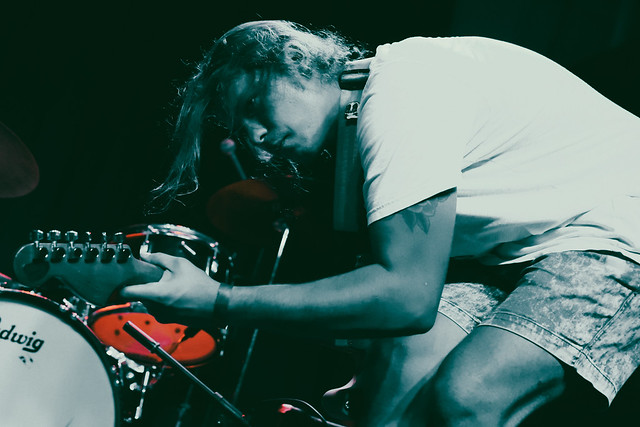 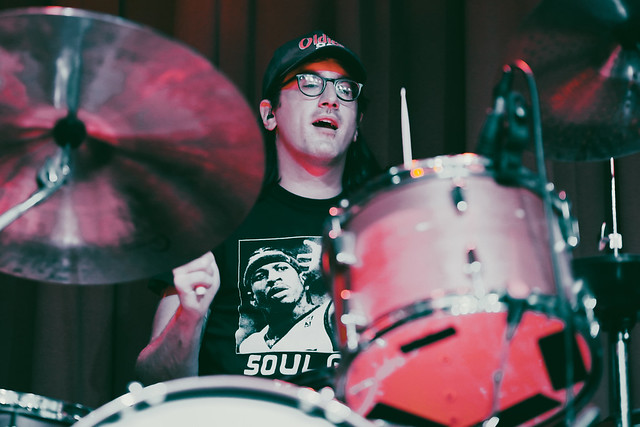 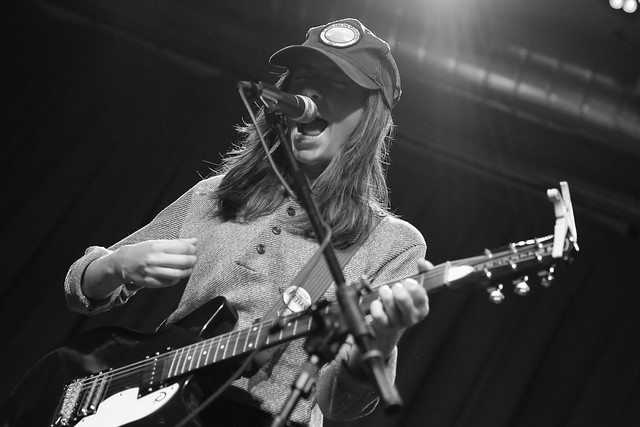 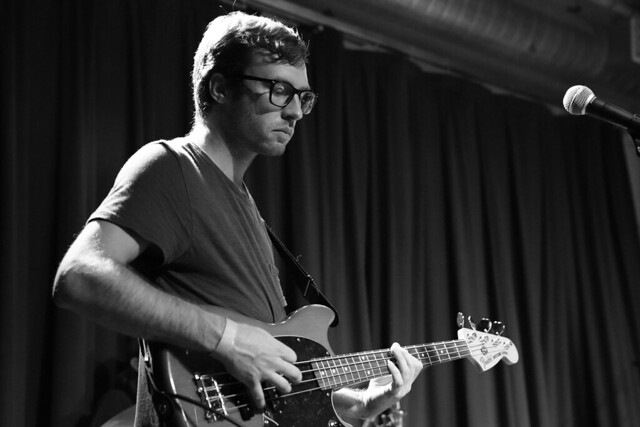 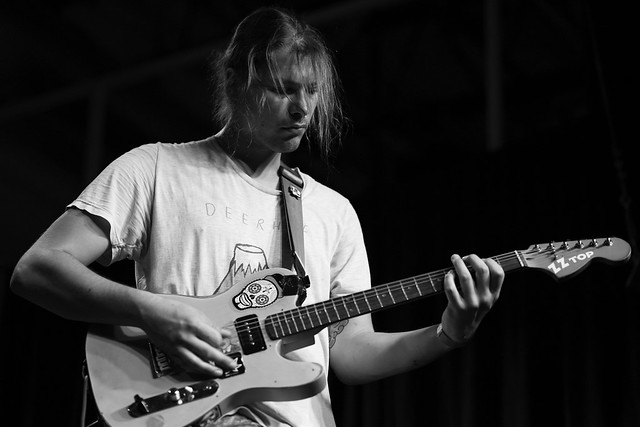 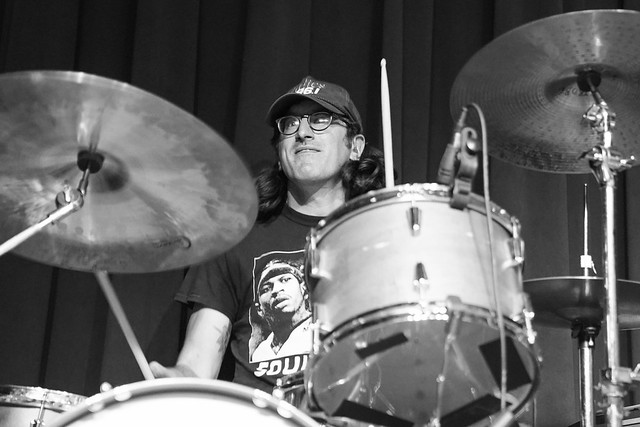 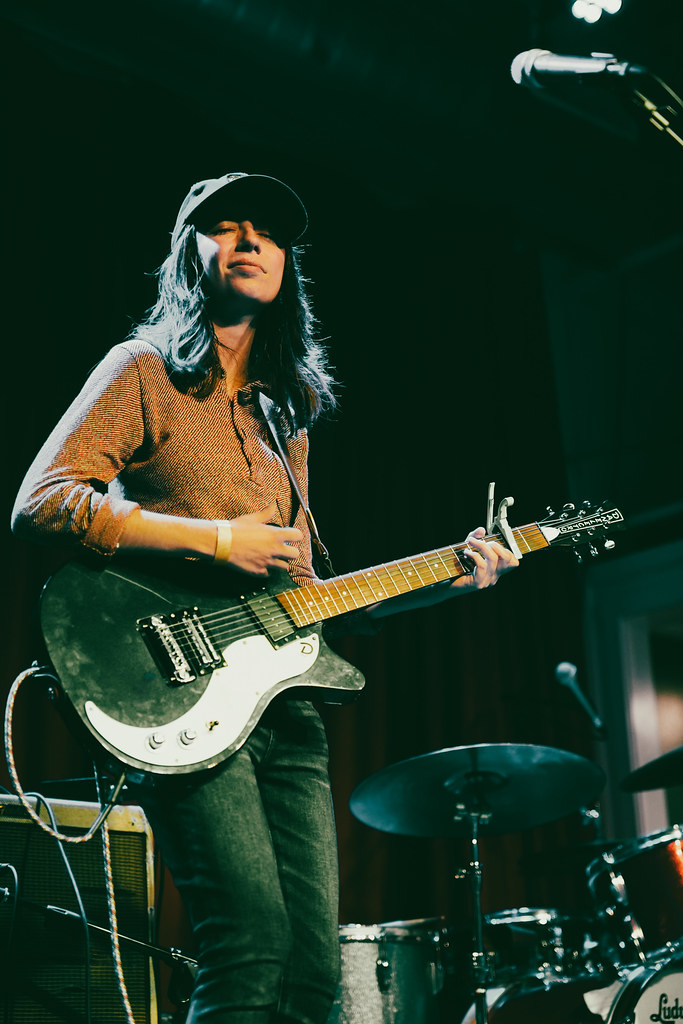 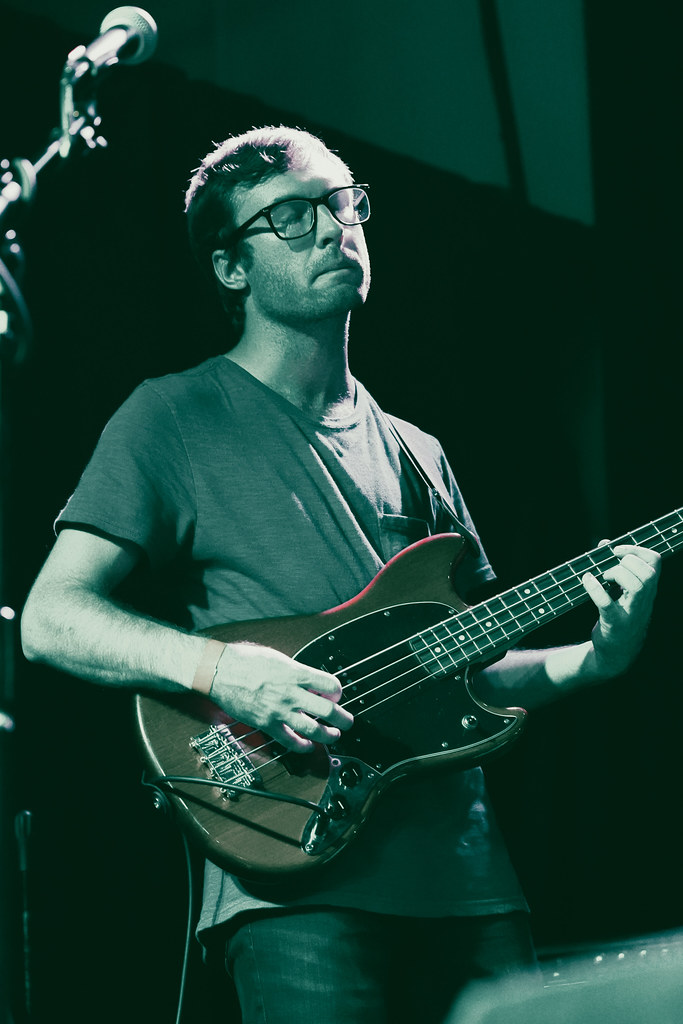 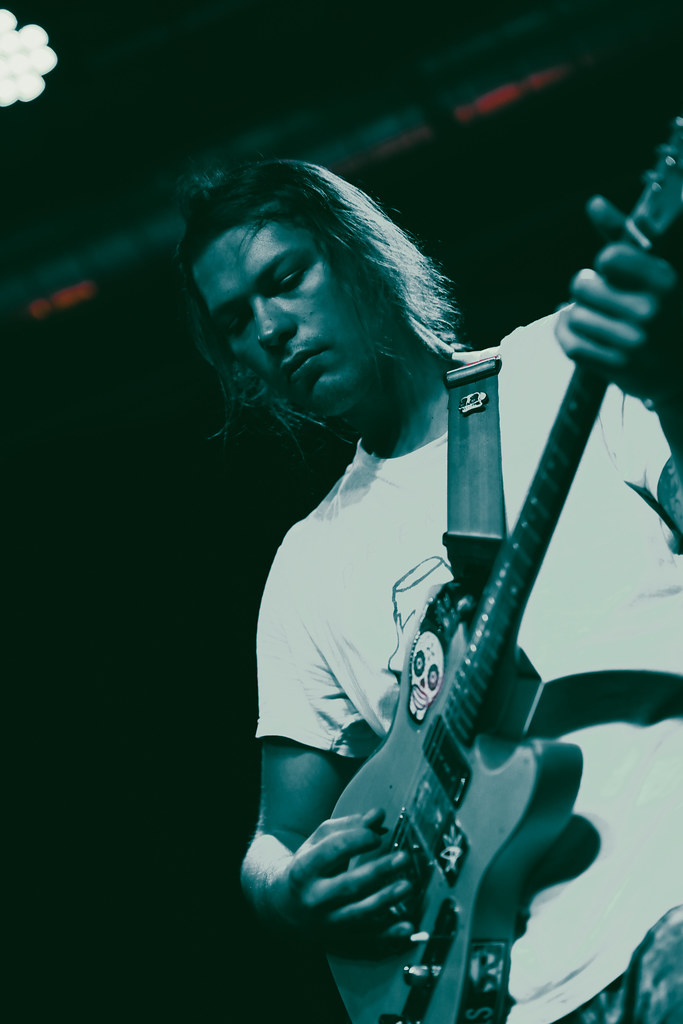 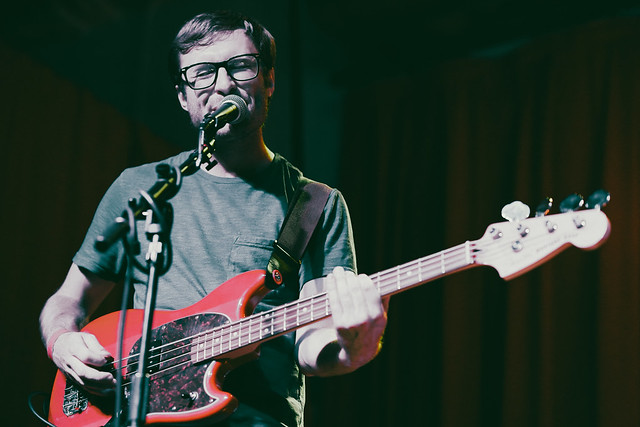 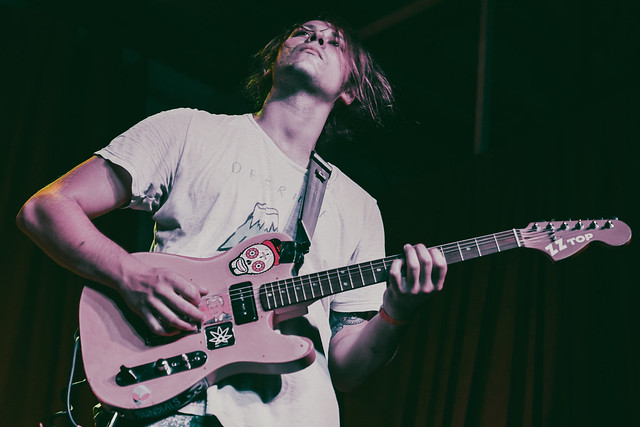 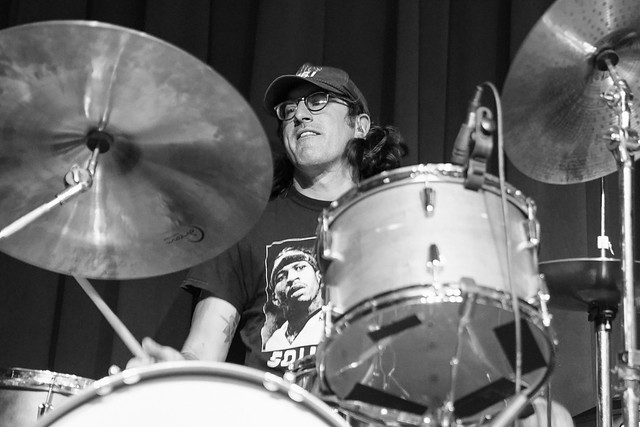 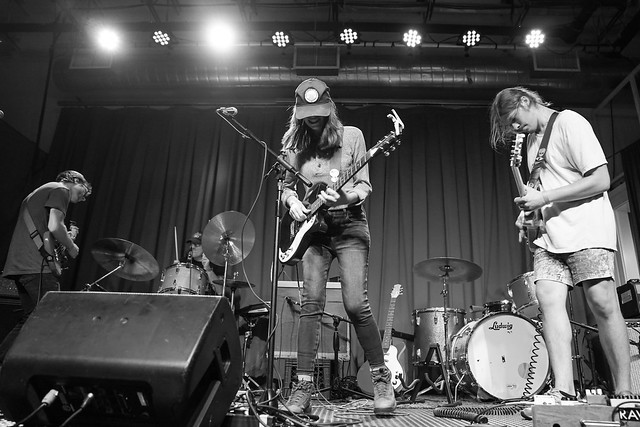 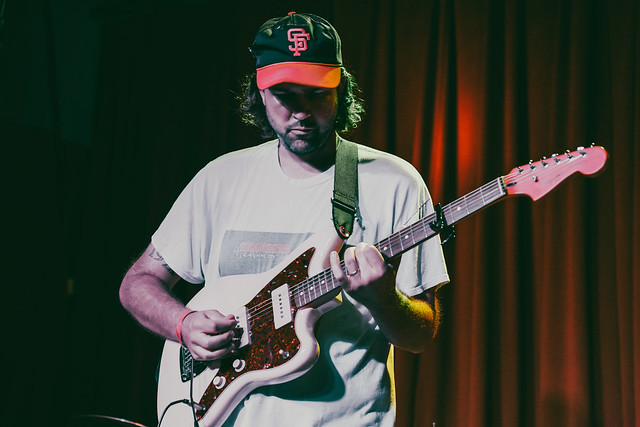 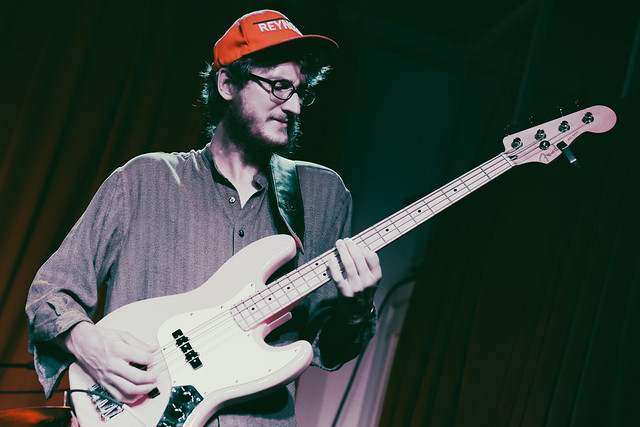 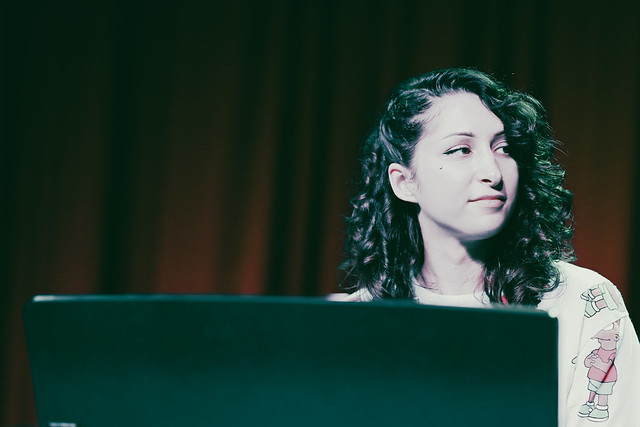 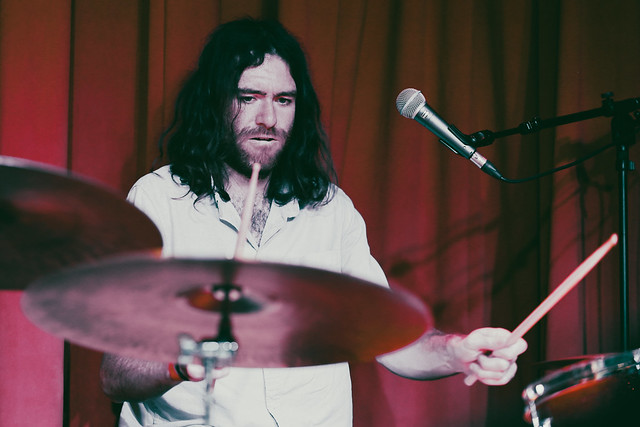 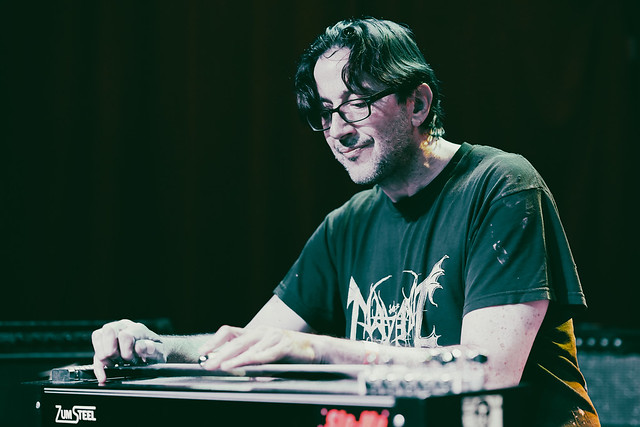 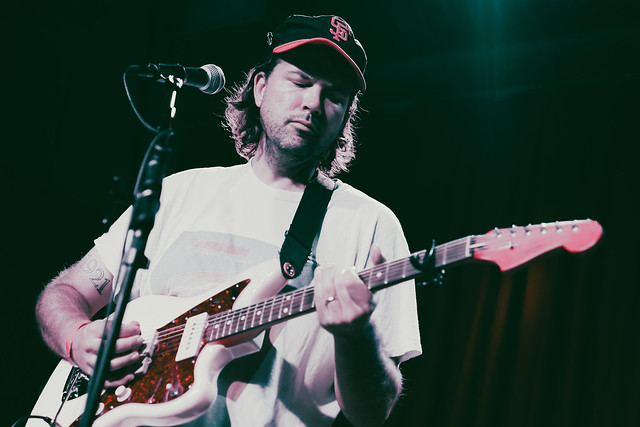 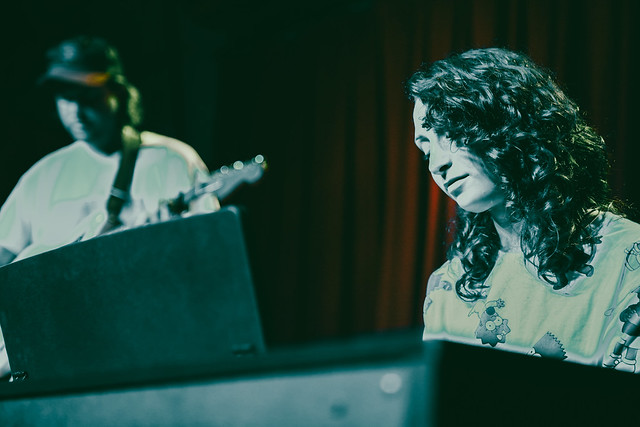 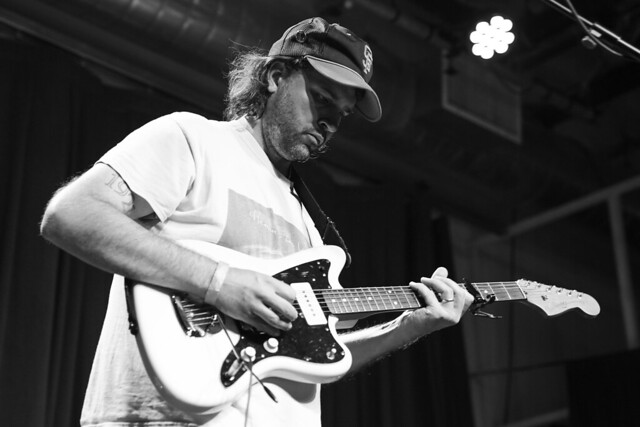 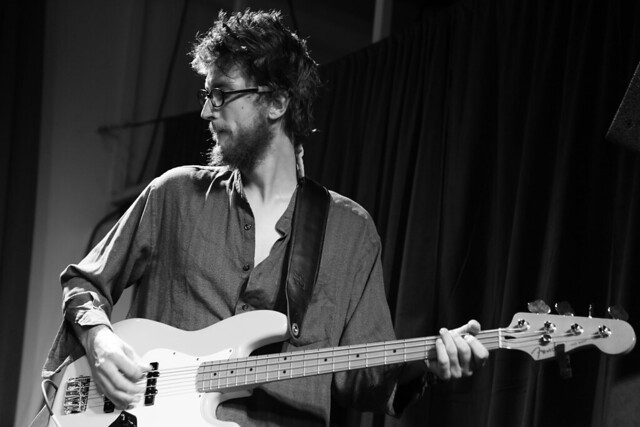 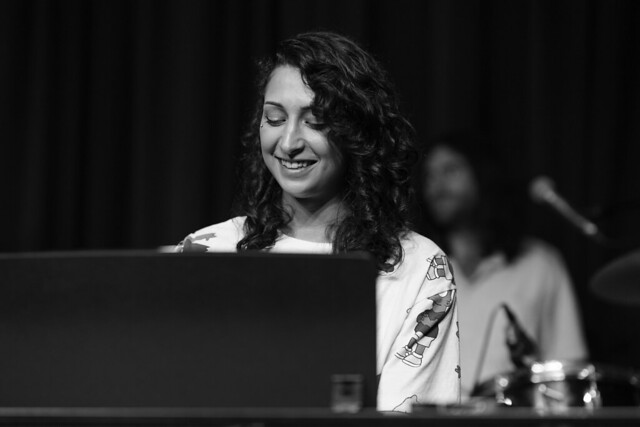 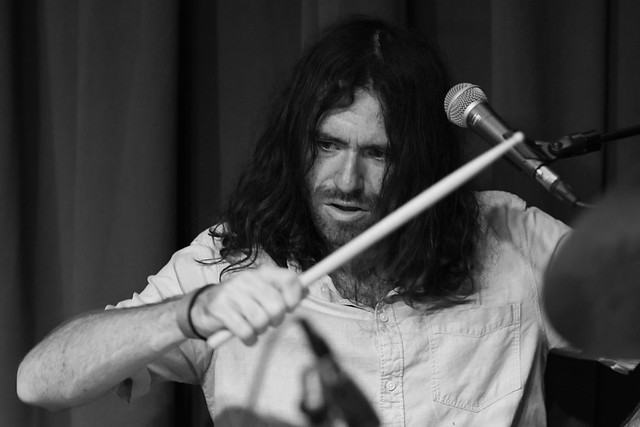 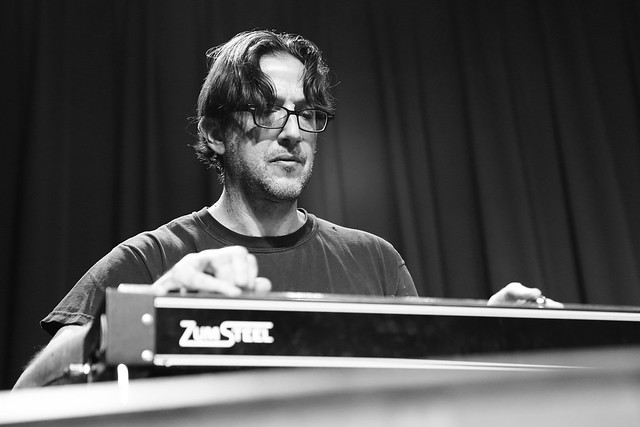 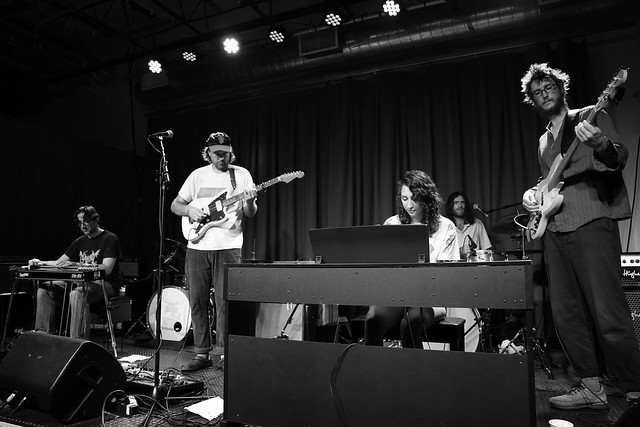