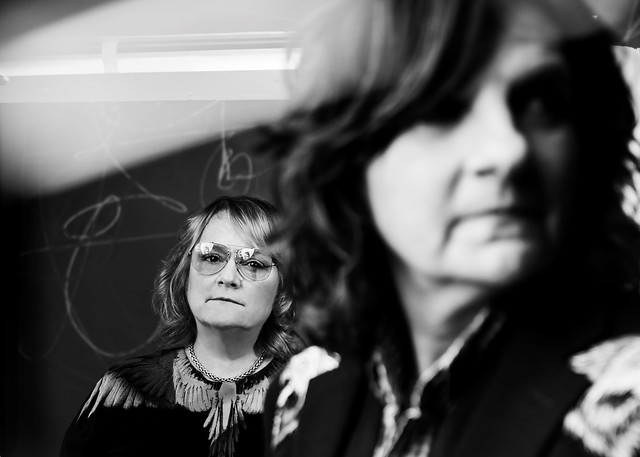 Some of folk music’s leading lights were on stage when Ani DiFranco and the Indigo Girls played a co-billed show at Wolf Trap recently.

DiFranco and the Indigo Girls both emerged just over three decades ago. Ani, a native of upstate New York, began playing out locally in her teens, and soon began touring. Fiercely independent, she was heavily influenced by the DIY and underground scenes, and there’s a bit of punk flavor to her music. She has been praised by other artists like Jason Isbell as a pioneer in retaining ownership of her own catalog.

The Indigo Girls, Amy Ray and Emily Saliers, came out of the vibrant Athens, Georgia music in the late ’80s. This the same scene from which R.E.M. launched, and they appear on the Indigo Girls self-titled second album. Their first on a major label, Indigo Girls was eventually was certified platinum.

Both acts can, at times, be quite political. As queer artists — Ani is bisexual, and Saliers and Ray are lesbians — their sexuality often informs their music. This was specifically nodded to by Ani with her song “In or Out.” Women’s issues and feminist stances are important them: reproductive rights, and Texas recent ban on abortion after about the six-week point in a pregnancy, were mentioned in both of their sets. Ani’s “Play God” addressed the topic on Sept. 22, while the Indigo Girls “Go” was dedicated to “the woman of Texas, and Georgia, and Alabama, and Mississippi.”

Watch the Indigo Girls perform “Go” on Live from Here with Chris Thile on YouTube:

Wednesday’s show was divided into three segments. DiFranco took the stage first, accompanied by a drummer and a bassist/keyboardist, and they played for about an hour. Late in the set, they were joined by vocalist Zoe Boekbinder for “Simultaneously” and “32 Flavors,” which might just be Ani’s signature tune. a few numbers, and they played for about an hour. Many of her songs came from her latest release, last year’s Revolutionary Love, including the title cut, “Bad Dream,” “Contagious,” and “Do or Die.” Opening with “Still My Heart,” the set also included fan favorites like “Swan Dive,” “As Is,”  and “You Had Time,” ending with “Gravel.”

In addition to her brilliant songwriting, Ani also has a notable and distinctive style as a guitarist. In her recent memoir, No Walls and the Recurring Dream, she explains that she never much enjoyed strumming the instrument, preferring to exploit its percussive qualities. This style of play makes Ani’s songs instantly recognizable.

After an intermission for a set change, the Indigo Girls took the stage. They were joined by a violinist and, on backing vocals, by Lucy Wainwright Roche. This was something of a treat for me: I went to college with Lucy, but, somehow, I’ve never managed to catch her perform. The Indigo Girls also had a new album out in 2020, Look Long. In addition to the title cut, they shared “When We Were Writers,” but most of their set drew on their extensive songbook. As they changed instruments for the former, Amy told the audience that the mandolin she was playing was 100 years old. They invited the audience to sing along with “Shame On You,” Midway through the set, they covered “Hammond Song,” which was written by Lucy’s aunt, Maggie Roche. Other songs included “Get Out The Map,” “If I Don’t Leave Here Now,” “Share the Moon,” “Share the Moon,” and “Galileo.” They closed their set with “Kid Fears,” a fan favorite from that blockbuster album.

The Indigo Girls played for an hour, then, following a very brief set change, they did a final short set together with Ani and her backing band. They began with John Prine’s “Angel From Montgomery,” followed by a cover of Natalie Merchant’s “Which Side Are You on? and “Tear It Down,” which comes from Amy Ray’s solo material. It was then mentioned that, at midnight, it would be Ani’s birthday, and the Indigo Girls, along with the audience, sang her “Happy Birthday.” The show closed with “Closer to Fine,” the Girl’s biggest hit song.

For any fan of folk music, or just of great singer-songwriters, Wednesday’s show was a highlight of Wolf Trap’s season. The show was originally scheduled for last year’s season, before the pandemic shut everything down, and the audience was clearly excited for this finally happen. Ani and the Girls more than delivered on those expectations, making for a night of spectacular music.