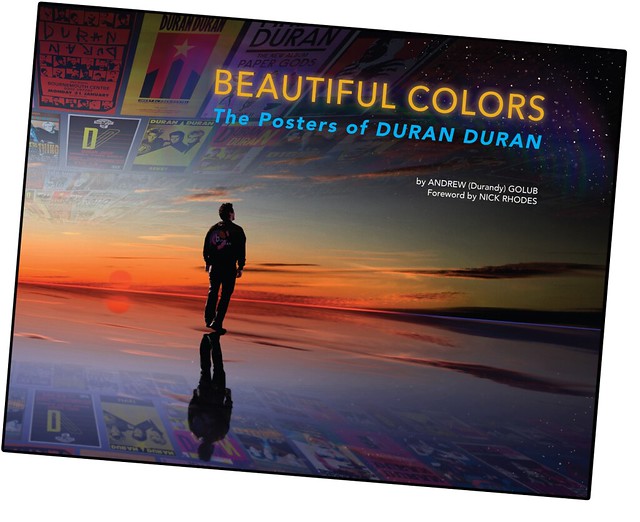 In three weeks, Duran Duran will release Future Past, the legendary band’s 15th studio album, via Tape Modern for BMG. Should you want more Duran Duran prior to that, we recommend you acquire a copy of Beautiful Colors: The Posters of Duran Duran, curated by Andrew Golub (aka Durandy) and photographed by Christine Born with a foreword by Nick Rhodes!

Fans of Duran Duran know the band truly has been about more than just outstanding music — the gents always have concerned themselves with the visual aesthetics of their art as well. Nothing captures that fact better than Beautiful Colors.

This second edition boasts luxurious new packaging and expanded content, charting DD’s evolution from New Romantic roots to the 2018 tours in support of the Paper Gods album. Highlights include previously unseen posters that were never put into production, reflections from the band members, and insights from artists on their creations. Beautiful Colors delivers an unprecedented look at a music icon, and the history shared by millions of devoted fans across Planet Earth.

This unique examination of Duran Duran’s story is particularly relevant as the band writes its next chapter, preparing an exciting new album and shows that promise to energize Duranies across Planet Earth.

Watch a visualizer for “Anniversary” by Duran Duran on YouTube:

John Taylor of Duran Duran says, “I love Durandy’s limited-edition publications! For the memorabilia freak like myself they are the perfect guide to the legacy world of Duran Duran tours and artwork. But their value goes beyond Duran Duran, as they have a lot to say about the changing state of pop music ephemera. We are really lucky to have him and his dedicated projects. A must for all Duran fans and then some!”

Andrew (“Durandy“) Golub has been a diehard Duran Duran fan ever since he first heard the popular British band’s hit single “The Reflex” on the radio back in 1984. While the trend of collecting memorabilia is a fairly common one with fiercely devoted fans, little did the then-12-year-old, who felt an instant urge to immerse himself with all things Duran, know he was about to take it to the next level — and by doing so, eventually grab his favorite band’s attention, and obtain their cooperation.

Beautiful Colors: The Posters of Duran Duran is the culmination of remarkably rigorous curation work spanning three decades. For over 30 years, “Durandy” — as he was dubbed years ago by Pacific Northwest radio DJ’s in light of his numerous requests for the band’s songs — has been archiving the world’s largest known collection of Duran Duran memorabilia, including more than 1,500 posters, over 10,000 pages of magazine articles, 150 books, and such rarities as a Duran Duran casino chip, a 3-D foldout poster, a zippered purse, an obscure board game and even a condom from the band’s 1993 tour (in its original packaging). With his focus shifting toward the band’s renowned bold and stylish visual aspects, Golub sought ways of sharing the remarkable collection of artistic and visually-stimulating posters he has gathered over the years with fellow Duran Duran enthusiasts.

“The posters have always been the heart of the collection,” Durandy says. “Such mementos have an innate connection to the band’s history, as well as the fan community, simply due to the posters’ intended use: advertising a single concert in a specific town, attended by a limited amount of people; that one evening becomes the backdrop for stories and experiences shared by everyone lucky enough to be there. When I consider how many posters I have acquired over three decades, I realize my archive is full of memories, not just memorabilia.”