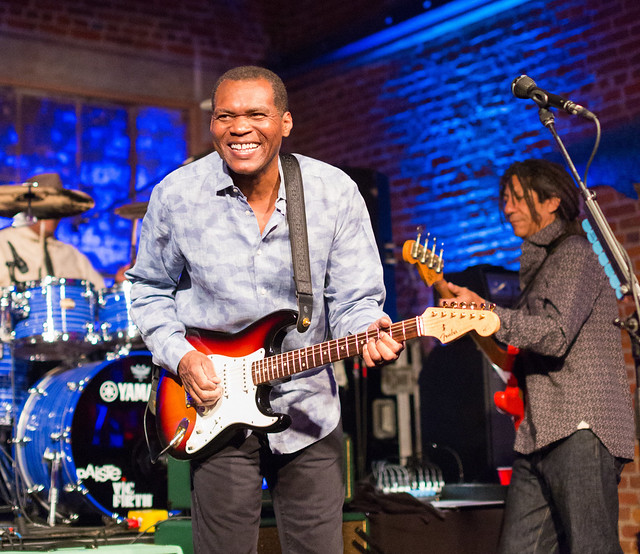 In an era when blues records were selling in the thousands, Robert Cray’s albums and songs were making the major charts.  First attracting critical notice with 1983’s Bad Influence, he achieved his commercial breakthrough with 1986’s Strong Persuader. Between 1986 and 1992, eight of his songs made it to the top 40 American Rock Singles, with “Smoking Gun” and “Don’t Be Afraid of the Dark” reaching number two and number four.

While he is a formidable guitarist and singer, Cray’s music is most distinctive in his lyrics. He maintains the forms of Southern soul and blues, but he nonetheless found new and interesting ways to tell those stories. Strong Persuader takes its title from “Right Next Door,” a detailed story of affairs and domestic strife. There’s an economy and  a directness to  Cray’s writing, and he manages to pack complex ideas and emotions into a small number of simple words.

On Sept. 28 at The Birchmere, Robert’s set opened with “Anything You Want,” a fine love song. After the band wrapped up an audience member loudly proclaimed their love for the bassist. Without missing a beat, Robert quipped, “You’re supposed to love me more!” Throughout the show, he displayed a sparkling wit. After “Hot,” which includes the line, “my baby thinks I’m hot,” he commented, “And the men think so, too. That’s the way of the world.”

Stream “Anything You Want” by Robert Cray on YouTube:

There were a number of love songs in the set; Cray followed “Anything You Want” with the equally devotional “Anytime.” Toward the end of the set, the band played “To Be With You,” and he closed his encore with “Time Makes Two.” As much as he emphasized songs of love and devotion, Cray also touched on the defiant side of the blues with “You Can’t Make Me Change,” and he finished the main set with the inspirational “You Must Believe In Yourself.”

There’s a saying about the blues, that it’s music that you listen to when you have the blues, but once you listen to the blues, your blues are gone. Songs like “Sittin’ On Top Of The World” and “Bouncing Back” celebrate resiliency, and, when you hear these songs, you can’t help but feel your mood improving.

Cray’s version of the blues incorporates a lot of R&B, too. Introducing “Two Steps From The End,” a song about mortality, he said, “Let’s get down and funky on it.” “Boogaloo,” which he played in his encore, emulates the Godfather of Soul. After he finished playing, Robert declared himself “faster than James Brown.” Before “Shiver,” which is an ice-cold jam, he told the audience, “I’m sick y’all. I’m shiverin’ all over.”

Slice-of-life songs, like “Chicken In The Kitchen,” make up a lot of his catalog. The stories he tells are the stuff of everyday life, the struggles, trials and tribulations, and little victories that have long made up the substance of the blues. He doesn’t spin grand narratives, and what he does is pretty grounded. Robert’s guitar work — which is impressive — has been described as clean and without showboating, and the same can be said about his lyrics. Economy and directness are of paramount importance with the limited space available in a song, and Cray’s songbook is full of those qualities.

Though he’s a southerner, Cray’s voice has little accent. Both in speech and in singing, his voice is clear, expressive, and emotional. It provides a compelling vehicle for his songs.

If you are, to any extent, a fan of the blues, you really owe it to yourself to see Robert Cray. He’s every bit as good live as his records — which are exceptional — and his band is incredibly tight. The blues don’t get any better than this.