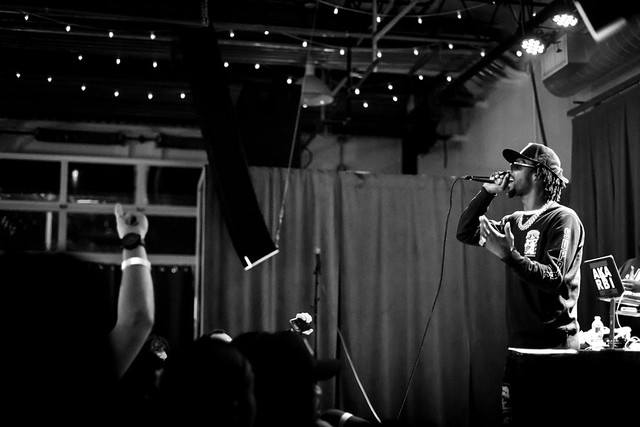 Boldy James in his element at Songbyrd Music House on Oct 6, 2021. (Photo by Shedrick Pelt)

Bo knows football and baseball but Boldy knows rap. Boldy knows the “Drug Zone” in Detroit and James Jones aka Boldy James knows exactly what his diehard fans want when he stops through a venue like Songbyrd Music House in Washington DC Wednesday night.

Fresh off the release of his new project Bo Jackson, produced entirely by the hip-hop legend The Alchemist, James had the recently relocated music hall buzzing from the get go on Oct. 4. Boldy’s infamous tag line “What up doe?” can be heard excitedly jousted between visitors at the sold-out show in Union Market’s Songbyrd.

And if for some reason you’re not on this wave, have been living under a rock, or just haven’t had an opportunity to be blessed sonic-ally by one of Griselda’s most recent additions, Boldy’s debut album ‘My 1st Chemistry Set was released on Oct. 15, 2013 and was also handled on the side of production by The Alchemist.

Watch the official music video for “Moochie” by Boldy James on YouTube:

At the age of 38, it would seem he’s getting his flowers a little late in life, but truly that time on the clock has only made his bars more vicious and his delivery more seasoned. A fact that can be felt with raps like “It’s hard to restrain us, karma, she played us; Grandma, she raised us, pharmacy saved us, see the van, know the narcs finna raid us” from “Double Hockey Sticks.”

In a flurry of records both old and new, Boldy hardly took a breath. Only stopping to check the temperature with the now exalted mob rapping verse for verse alongside him. The night was to say at the very least electric, watching the Hall of Famer round the bases after a Grand Slam in the 9th, leaving your favorite pitcher and baby momma in awe. Plain and simple BOLDY KNOWS BARS.

Below are images from a night at Songbyrd in Washington DC on Oct. 6, 2021, inspired by Detroit’s gritty experience. All images and words copyright and courtesy of Shedrick Pelt (www.sdotpdotmedia.com)!