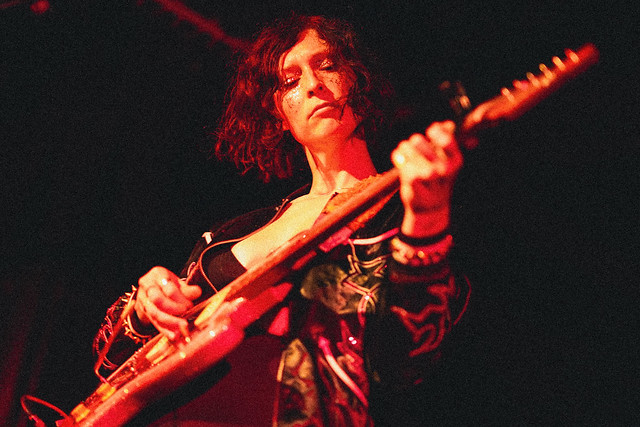 A rising star with local ties, Liz was a standout golfer during her high school days in Maryland, and she was in fact so good at swinging the clubs that she even received an athletic scholarship to golf in college. But after a couple years, she realized she wanted something else out of life, something more challenging and more rewarding. And so Liz left college, and in 2012 she went to Nashville.

She learned how to shred the guitar, she discovered that she had a voice — and determined how to project it in the most mystifying, hypnotic ways — and within two years, she burst onto the scene with the Liz Cooper and the Stampede EP Monsters, a six-song offering that would turn many listeners on to her voice and her style.

Quickly developing into a thrilling electric guitarist and a bold, daring singer with a truly uncommon angle in her voice, Liz — now based in Brooklyn — has already performed on premiere stages before massive crowds, like at the LOCKN’ Festival and the Newport Folk Festival, where she has been celebrated and welcomed into a powerful network of female songwriters and musicians.

And like many musicians on tour and in the studio today — a weird time indeed — Liz has worked to recreate herself and her music. Owning a more progressive, psychedelic sound with the release of Monsters in 2014 and then throughout the touring to support the full-length 2018 release Window Flowers, Liz’s projection shined a light on her influences from the 60s and 70s, not only in the texture of the recordings and live shows, but in the artwork and branding of the band.

A world of color helped Liz introduce herself and her troop to fans across the country, and her vivid, impassioned axe wielding put the bow on the package for some of the best presentation you’d find in a, up-and-coming, do-it-yourself act that can canvas different genres in myriad ways as onlookers could see on Oct. 4 at Black Cat.

An avant-garde shift from sunshine and mountain trails to a more extreme, unabashed embrace of desire, lust, rage and release, Hot Sass is Liz celebrating her primal instincts. If you’ve not seen the marketing or social media campaign yourself, it speaks to unconformity and to an entire realm of influences Liz hasn’t channeled in her previous work.

Unafraid of being influenced by all kinds of music and human experience, Liz brought her most current version of her band to the Black Cat in DC, delivering a vigorous and imaginative set of music pulling mostly from the album recently at the beginning of September.

The stage lit exclusively in a sultry red hue, the presentation matched the Hot Sass promotional efforts as Liz led her talented band through what appeared to be all but one track from the record.

It started with “Slice of Life” and its compact, circular groove directed by bass player Joe Bisirri and keyboardist Chase Johnson, showing from the first few notes that these sounds would be a collective effort — Liz’s voice, as remarkable and alluring as it is, is used like an instrument — well timed, fluctuating wildly within the expansive chasm, rife with subtleties, always strengthening the chorus. Here, she floated above the band, her calls from some kind of dream you forgot you had.

Enticing and inviting, her voice led the next track “Heart Shaped Candy” into its juicy, seductive discourse pulled from a charmingly lustful affiliation, and the bass, keys and Ryan Usher’s precise cymbal taps led this track tippy-toe onto precarious turf before Liz reassured that “everything is beautiful today,” as if demonstrating her resilience to the threats of desire.

Two songs with dark pop and even R&B attributes gave way to one of the hottest songs released this year: “Motorcycle,” a revving, undulating romp is impressive for its simple construction of bass and drum with a cinematic coat of keyboard effects and instigated by Liz’s undeniably obsessive, lyrical delivery that weaves in and out of what feels like an achievement in sinister, urban freeway disco.

Ryan has been making music with Liz for a good stretch, and he was relentless when asked to be — a healthy human of a drummer that we can all admire — but showed admirable care and attention to detail as well in making the journey through the Hot Sass track list, which is complex in its variety, with more must-hear tracks, like “Je t’aime,” “Feeling Good,” and “Shoot the Moon.”

Ryan might have been his most dexterous on “Lucky Charm,” a sophisticatedly funky, affably twisted epic that also called Chase to sneak in on a variety of percussion tools/noisemakers and reveal his amusement while letting loose, standing at his control tower. This track morphed into a ridiculously sharp jam, with Ryan carrying what manifested as a rabid jazz beat while Liz curled over her rig, crouched down to the floor, using distortion to create an additional layer within the mix.

Joe, as much as he tries to hide it and keep to his business behind the bass, is highly likable, and through his almost bashful signs of enjoyment, the energy he gives and takes with his hands is crucial to his and the band’s pulse. As Liz brought her voice back into ascension during “Lucky Charm,” her bandmates seemed energized by what they’d accomplished — the eye contact and collective signs of approval suggested this to be a group having the time of its lives despite the challenge musicians currently face.

One of only three tracks Liz played that were culled from Window Flowers was the captivating “Fondly and Forever,” which perfectly blends the sweet snap in her voice with a gorgeous progression of guitar chords. Showing she’d not abandoned this section of her catalogue, but rather supplemented it with an entirely new and necessary chapter, Liz projected a woman who is growing and evolving as a musician, embracing her artistic impulses and building on what she has already written.

Closing the set with the title track from Hot Sass, Liz and company successfully and masterfully wrangled a chaotic flow of distressed notes — hardcore, death metal, you can hear almost anything you might want in there — in a way that showed the band has developed synergy and a trust through the most unpredictable or volatile on-stage scenarios. This track, clearly Liz’s most indignant and one of her most impassioned, proved this band was right at home within the Black Cat, her screams condensing the space in an instant and drastically altering the mood of those on hand — again, more proof of the range this tight group can explore.

While her music shines light on a sophisticated understanding of a range of emotions, or at least an honest curiosity about them, Liz should be praised not only for her marvelously creative use of her one-of-a-kind voice, but for her determination to refresh herself musically on a number of occasions, with Hot Sass standing out as a boldly successful endeavor into a harder, more expressive sound.

Returning to the stage for her encore, Liz was unguarded — just her and her guitar. And after a cover of Lou Reed’s “Coney Island Baby,” she followed up with what she referred to as a Spotify “fan pleaser” in “Mountain Man.” Liz took a breath, shifting to her inexplicably bewitching persona, a place from which she approaches the listener like some kind of companionable alchemist from the hills — wise, pleasant, maybe even slightly flirtatious — while an encircling rhythm gyrates within her words.

The images she is able to illustrate with her guitar, alone, with the lights glowing on her, are truly amazing and laudable, especially in this track that she used to wrap up the night at Black Cat:

“When I am old, old and grey
Two steps closer to my grave
Whispering pines and bitter nights
You’ll be there to hold on to me tight
Through the forest misty mountain Adirondack
Creaking you and I …

Here are images of Liz Cooper performing at Black Cat on Oct. 4, 2021, along with the night’s opener, New Madrid. All photos copyright and courtesy of Casey Vock. 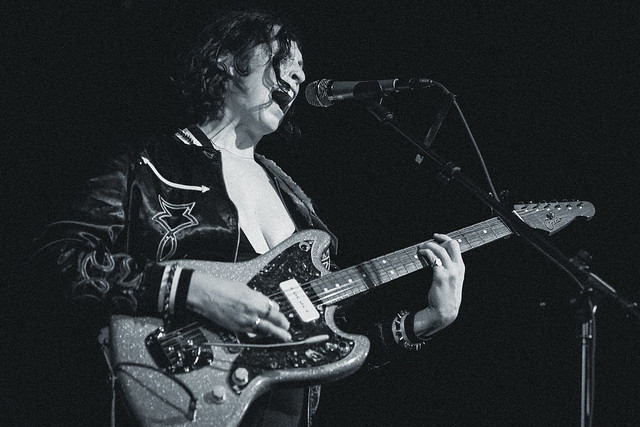 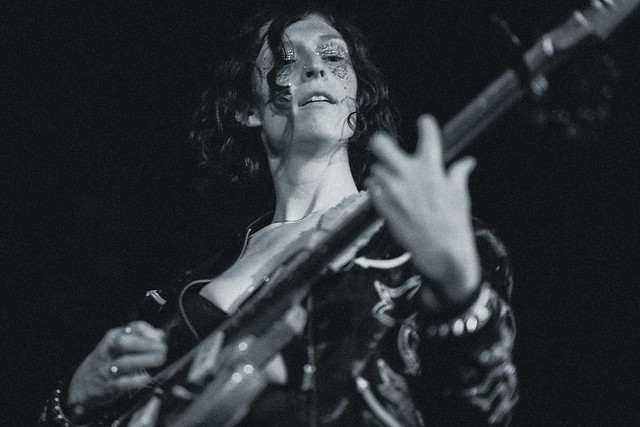 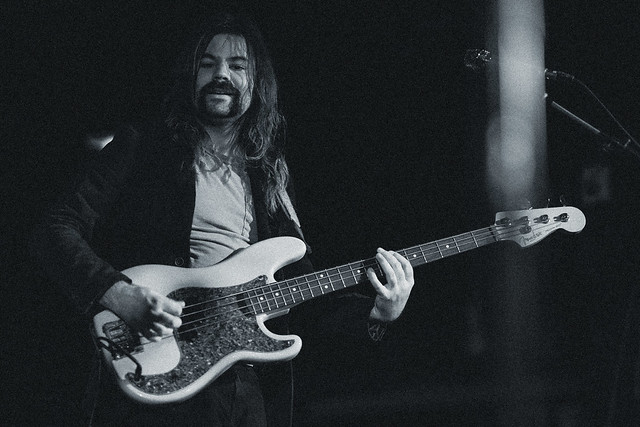 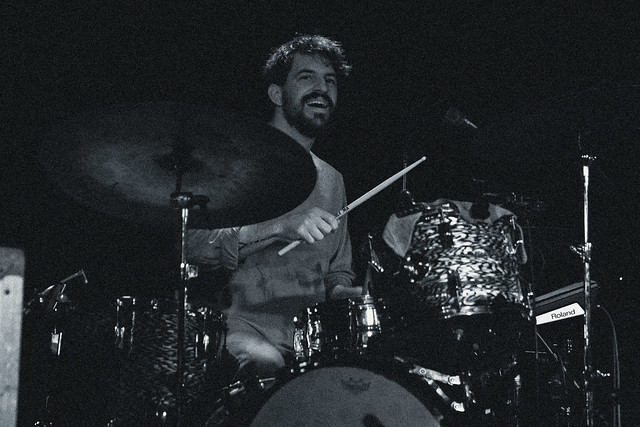 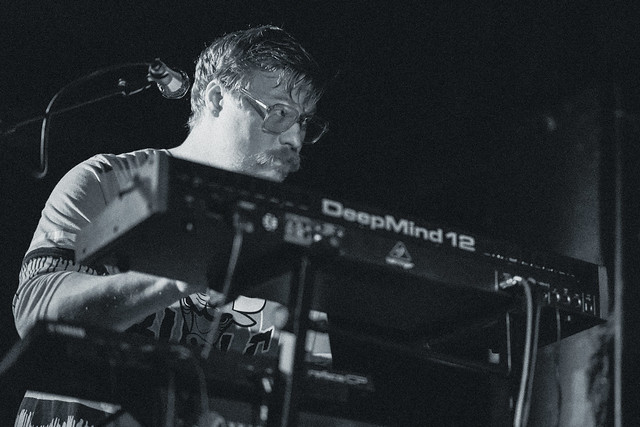 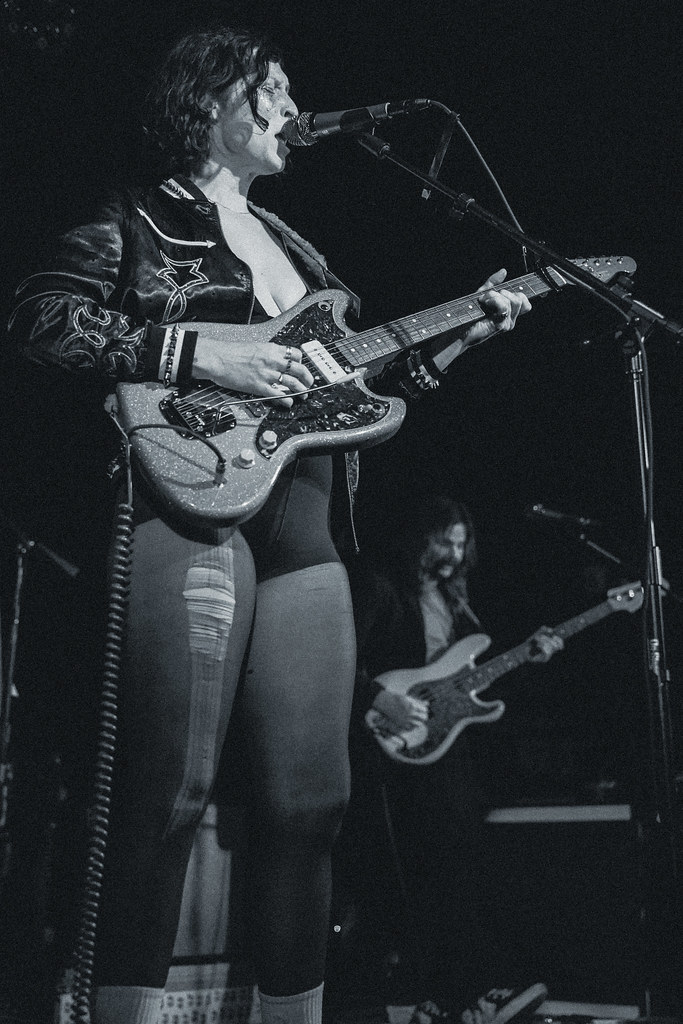 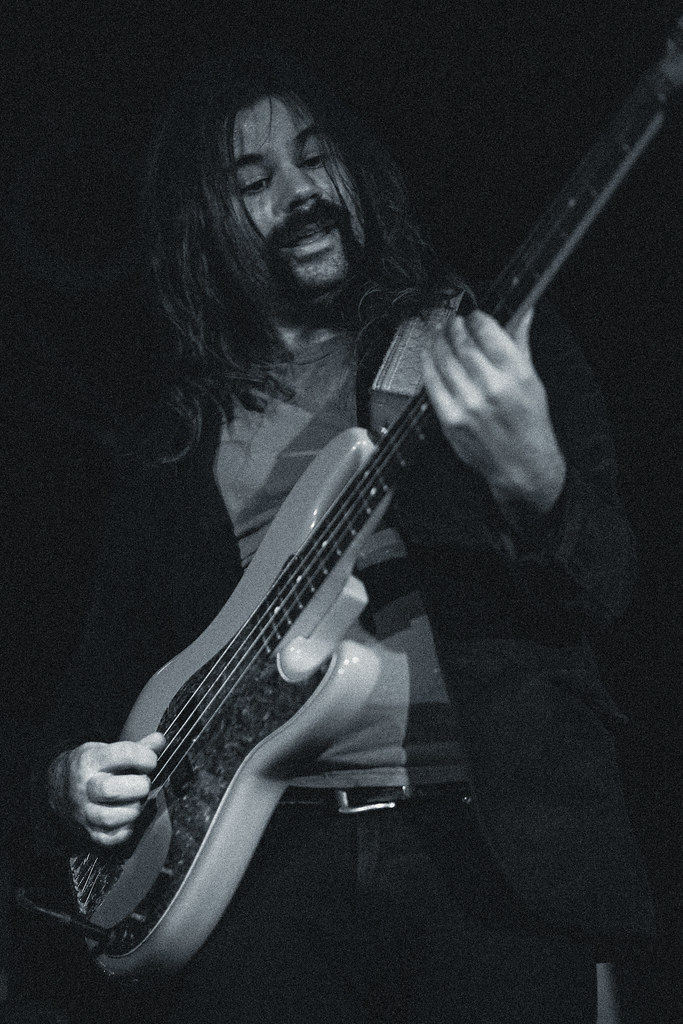 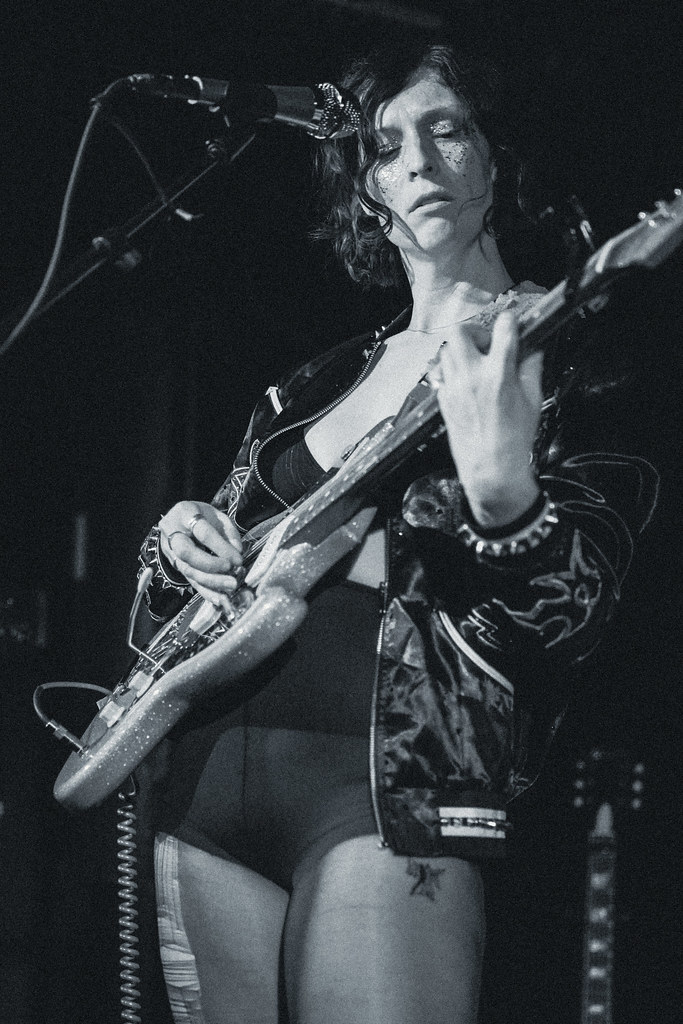 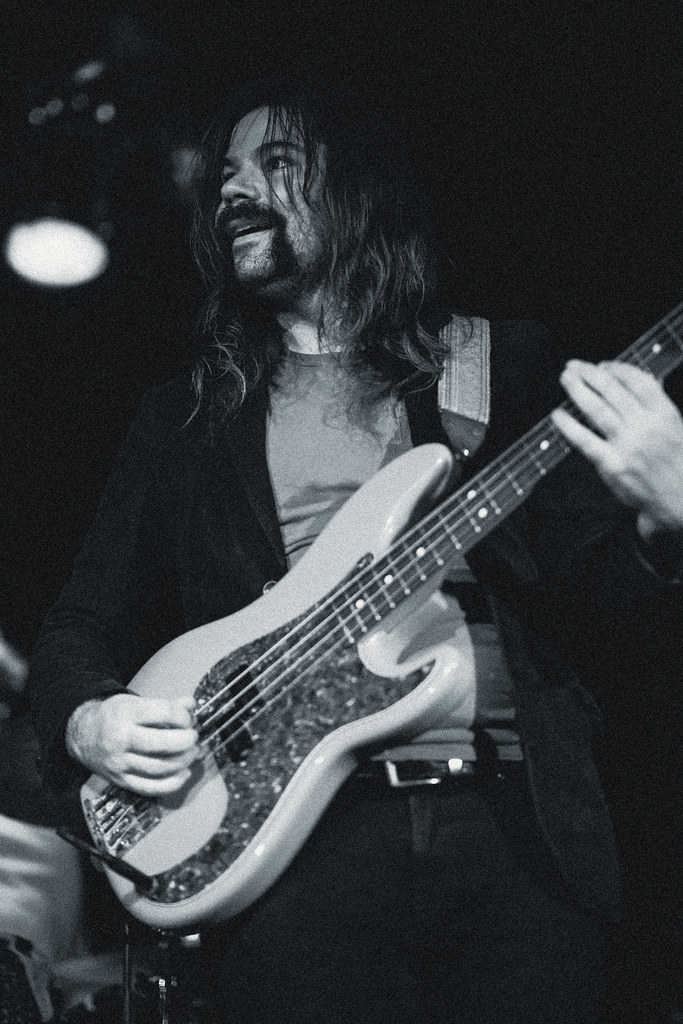 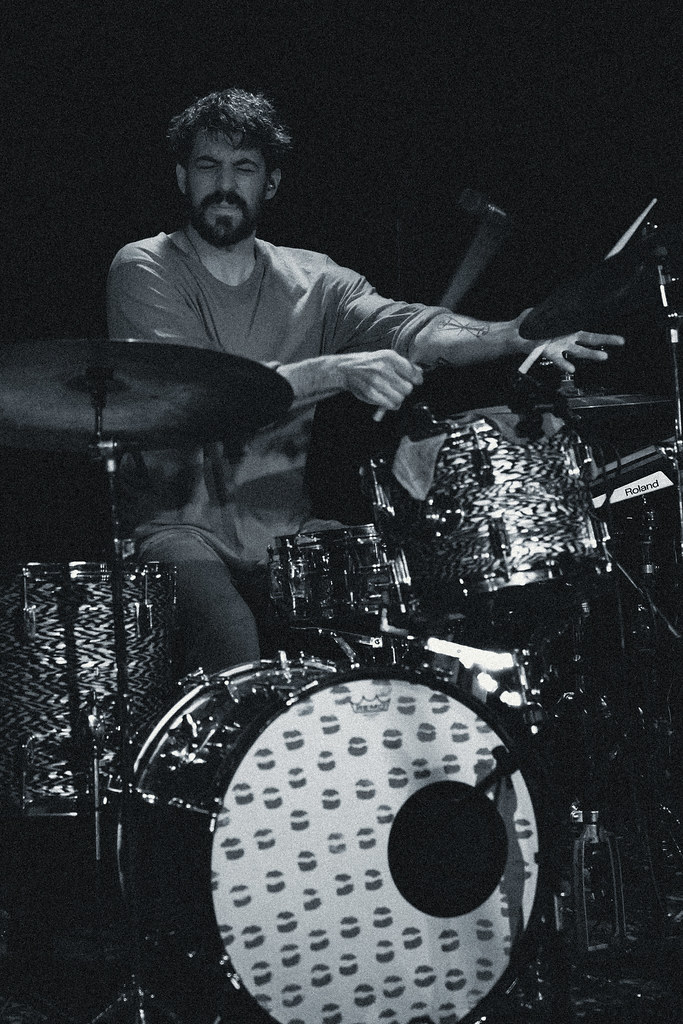 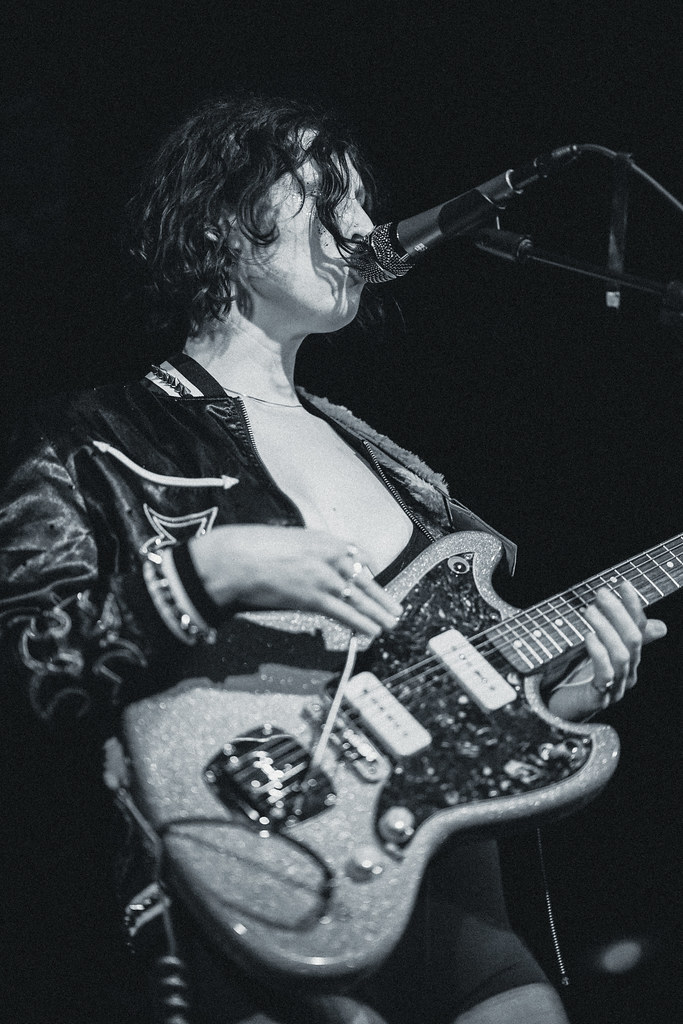 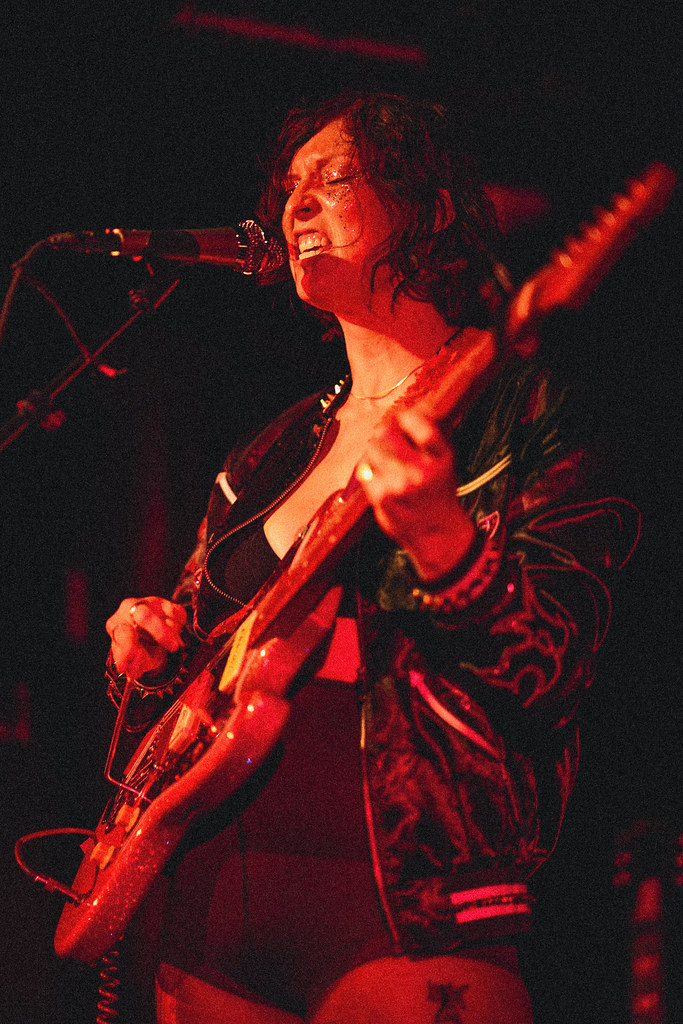 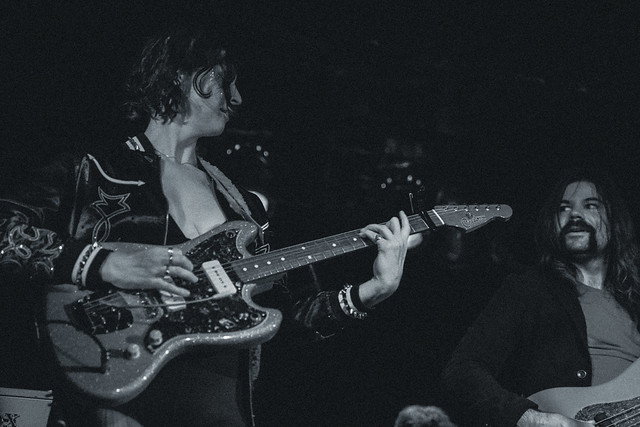 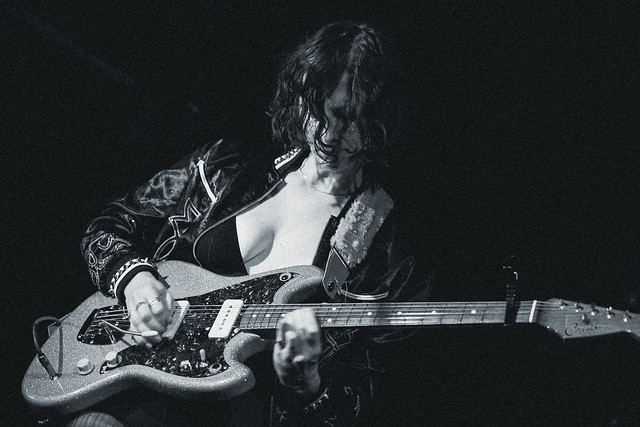 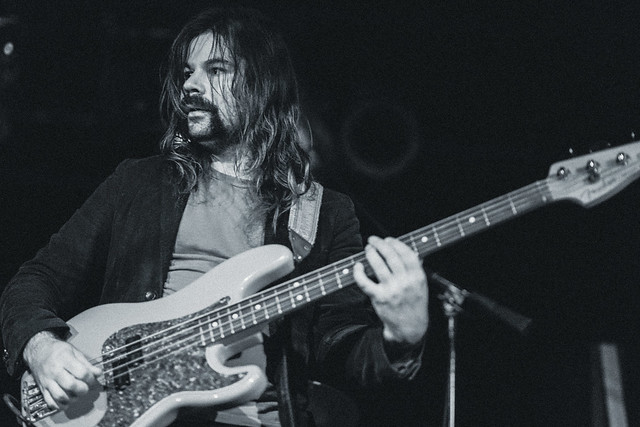 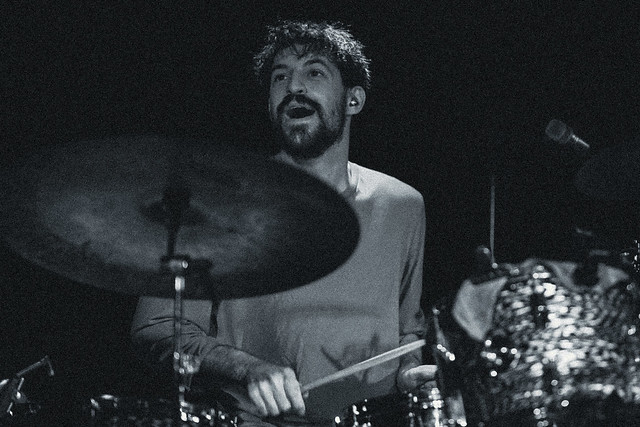 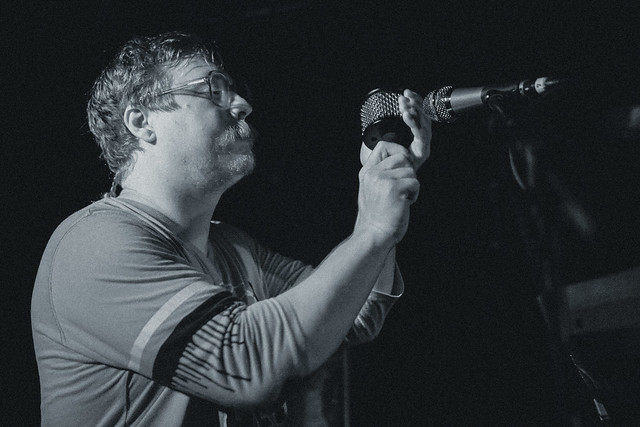 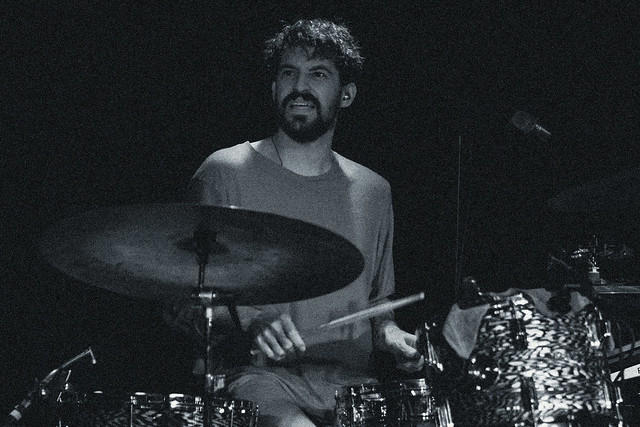 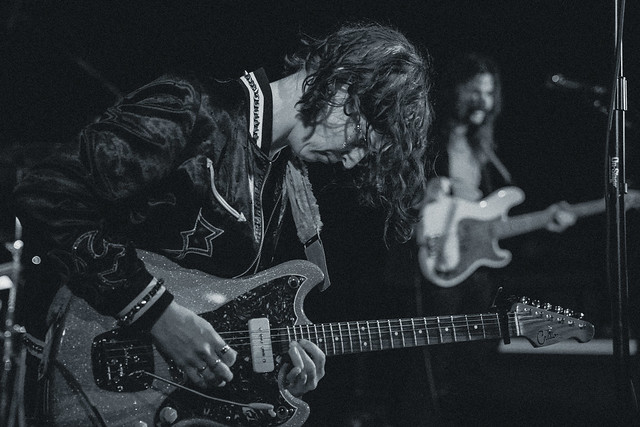 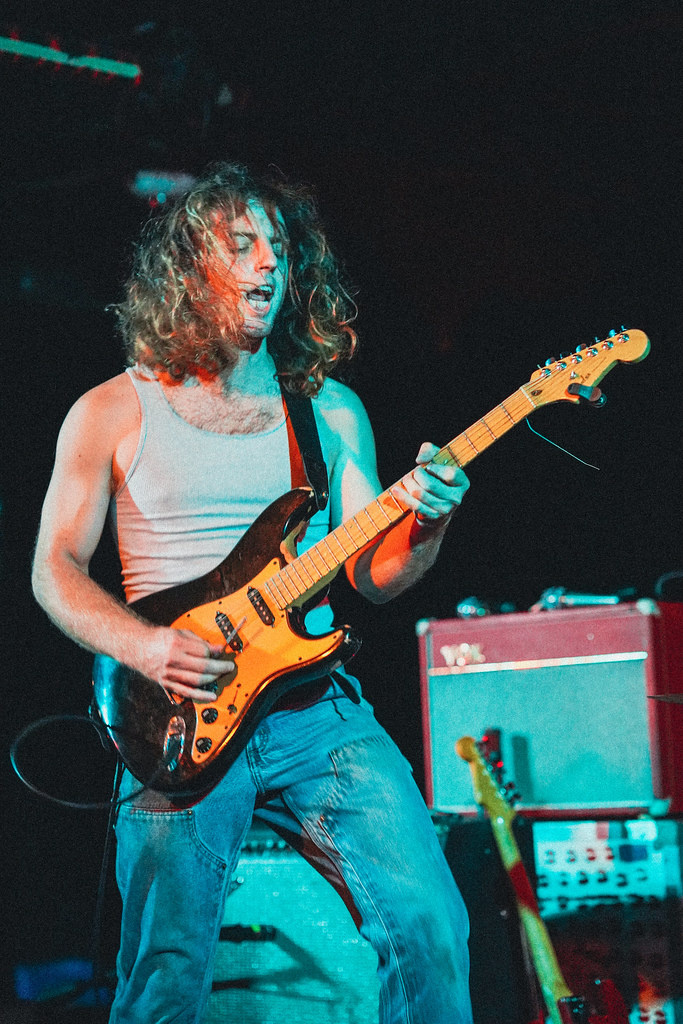 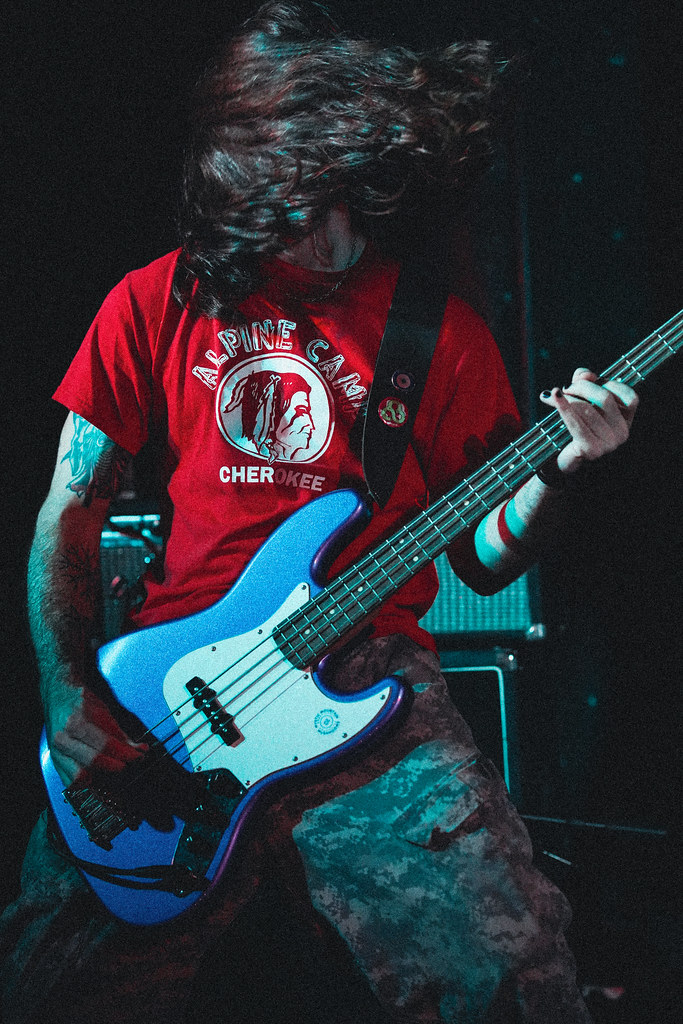 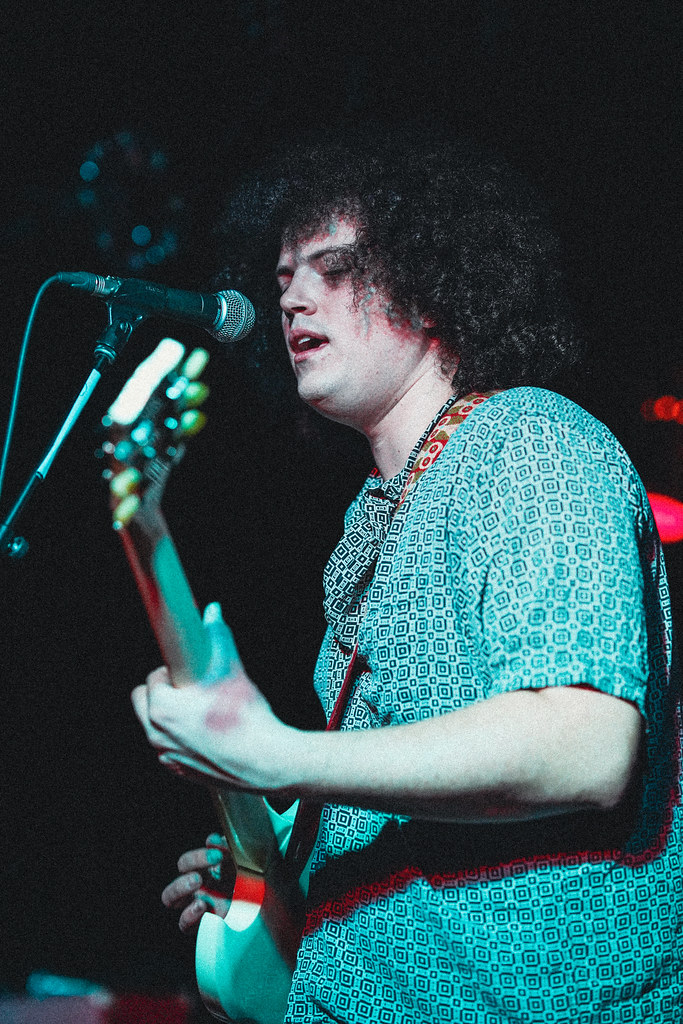 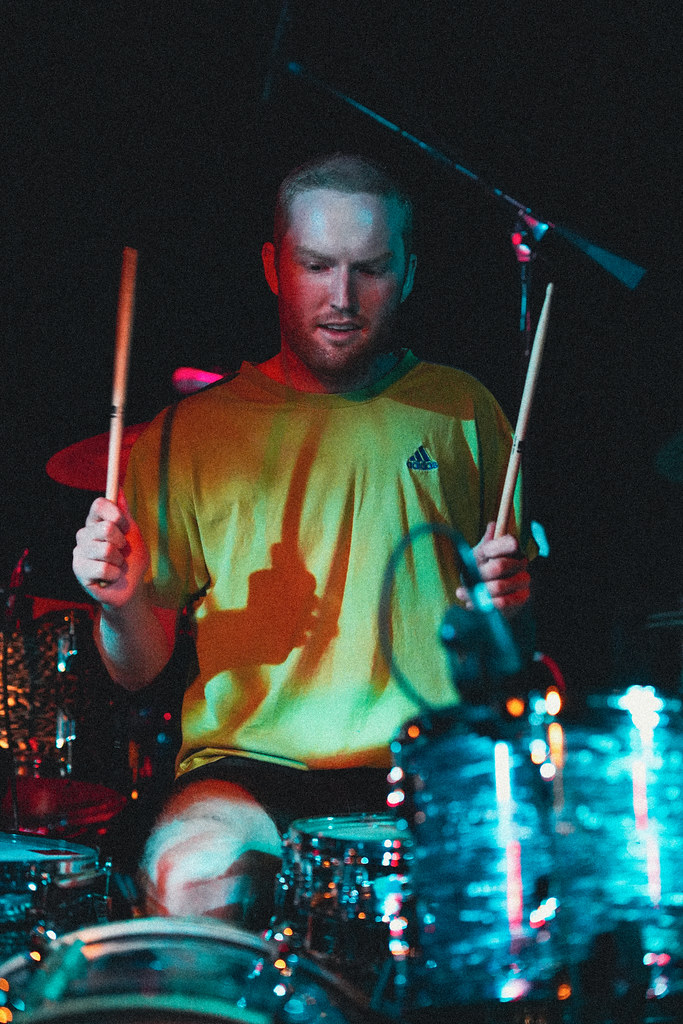