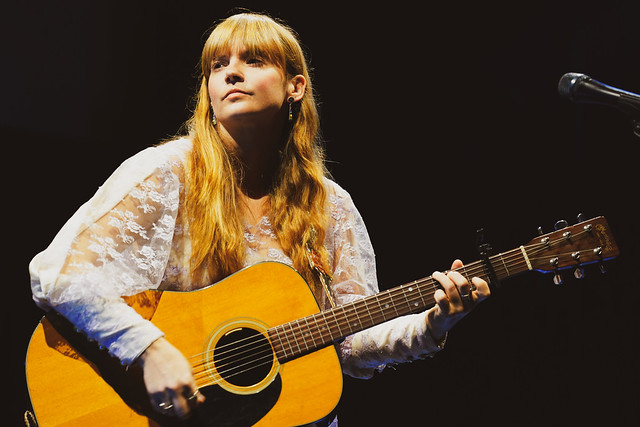 Courtney Marie Andrews performs at The Miracle Theatre in DC on Oct. 8, 2021. (Photo by Casey Vock)

The Miracle Theatre hosted a night of intimate, classic folk and Americana on Friday evening with singer-songwriter Courtney Marie Andrews and duo The Brother Brothers. Andrews’s songwriting and vocals are clearly influenced most strongly by Joni Mitchell, but you can also hear elements of Emmylou Harris, Joan Baez, and Carole King. The Brother Brothers’ style have been compared to Simon & Garfunkel, both for their close harmonies and their gentle, soothing melodies.

Twin brothers Adam and David Moss, who were born and raised in Peoria, Illinois, make up the indie folk duo The Brother Brothers.  In 2018, they released their debut album, Some People I Know; it was followed by last year’s sophomore outing, Calla Lily. For the past five weeks, The Brothers have been touring with Courtney, opening shows and serving as her band. During her set, Courtney noted they met two days before the start of tour. “I took a gamble,” she said, “and I feel like I won.” They noted that they’ve been on the road now for five months, since June, during which time they’ve been through cancellations due not only to Covid, but to the raging, record forest fires that have beset much of the western part of the United States. Without hitting the point about climate change too hard, they did point out that “Washington, DC is where things change.”

The Brothers began their set with “Colorado.” The album cut, on their first record, features Sarah Jarosz, who just won a Grammy for best Americana album. After that tune, one joked, nodding to the fact that we were in a movie theater, “You may now put on your 3D glasses.” They added, “The hard part about playing movie theaters is you compare the audience to movies you’ve seen.” They promised that one day their audience would reach “Avatar level.”

The Brothers’ stage banter returned to the subject of the movies after the title cut from the second album. They mentioned Weird Al Yankovic’s UHF, which they called “one of the best movies ever made.” (It’s debatable whether it’s one of the best movies ever made, but it is, at the very least, a true cult classic.) UHF, they noted, got buried at the box office by the competition from megahits like the original Batman and Honey I Shrunk The Kids. Releasing an album during the pandemic, they said, was very similar.

After “On The Road Again” — not to be confused with the Willie Nelson song of the same name, though it does address similar themes — they thanked the audience for coming out. “To a lot of you,” they said, “we’re probably new.” They won the crowd over with folk ballads like “Ocean’s Daughter” and the melancholy “Sorrow.” The title track of their first album, they told the audience, is “about real estate.” One of The Brothers was bartending in Brooklyn, at one of the oldest bars in the city, in a neighborhood called Red Hook. (Longtime wrestling fans may recognize Red Hook as the billed home of retired grappler Taz, while horror fans may be familiar with H. P. Lovecraft’s story, “The Horror at Red Hook.”) The neighborhood had many long-time residents, who The Brothers noted began to slowly disappear.

The Brothers rounded out their set with  “Circles” and “Waiting for a Star to Fall,” and they closed their set with Peter Rowan’s “Angel Island.” Though they may have been new to most of the audience, their charm and tight harmonies won the crowd over, and they got a warm reception.

Stream Calla Lily by The Brother Brothers on Spotify:

It’s hard to believe that Phoenix, Arizona native Courtney Marie Andrews is only 30 years old. She released her first album, 2008’s Urban Myths, when she was just 18 years old, and has since released six more records. Courtney’s early albums were indie rock oriented, but in the latter part of the 2010s, she gravitated toward a more country-folk or Americana sound. Her accomplishments as a songwriter are remarkable, coming at an age when many artists are just beginning to release material. Her latest album, last year’s Old Flowers, received some of her strongest critical reviews, and it won the Americana UK Association’s award for best international album. The album was inspired by a particularly difficult breakup, and it has a melancholy but soothing character.

Courtney opened the set solo, playing “Rookie Dreaming” from her 2016 album, Honest Life. During the pandemic, she explained, she spent a lot of time writing new music. She debuted one of those songs, which she said she’d written after watching 30 days of Alfred Hitchcock films. Between songs, she noted that there was audible music in the background, which she joked, “that’s actually the commercials I planned.” (I think it was music from a neighboring restaurant.) That was followed by the title track of her 2020 album, May Your Kindness Remain. For “Burlap String,” which kicks off Old Flowers, The Brother Brothers returned, playin violin and cello to back her up.

The bulk of Courtney’s set was drawn from that latest album: “Break the Spell,” “It Must Be Someone Else’s Fault,” and “How You Get Hurt.” Before “If I Told,” she shared  that, “During 2020 the moon meant so much [to me].” “Carnival Dream,” she explained, was about a nightmare that she and her partner both experienced. “Some people have really great ghost stories,” she said, adding, “I’ve always been envious of people who’ve seen ghosts.” Addressing The Brother Brothers, she introduced the last song of her sot, “Ships In The Night,” as “a little farewell song for you guys,” as they finished their tour together. (After finishing this run, Courtney has a week off, then she flies to Europe, where she will be touring for six weeks.)

Andrews’s 2016 album, Honest Life, got a fair amount of play as well on Friday night. In addition to her opening number, she performed “Irene” later during her main set. When she returned to the the stage alone for her encore, she asked if anyone wanted to hear any particular songs, and took the request for the album’s title track. To finish out the evening, The Brothers then rejoined her “Table for One,” another cut off from that album.

Courtney and The Brothers gave excellent, intimate performances, and their beautiful voices were a balm for the audience. These are some young artists to keep an eye on.

Here are some photos of Courtney Marie Andrews and The Brother Brothers performing at The Miracle Theatre on Oct. 8, 2021. All pictures copyright and courtesy of Casey Vock. 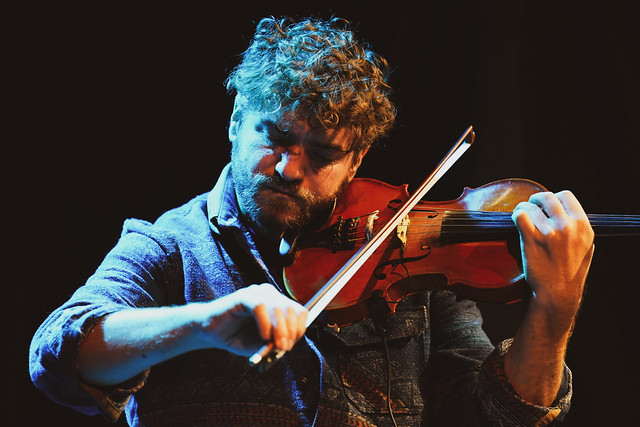 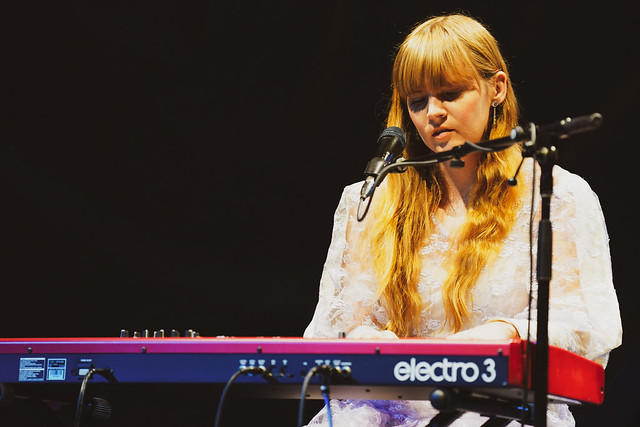 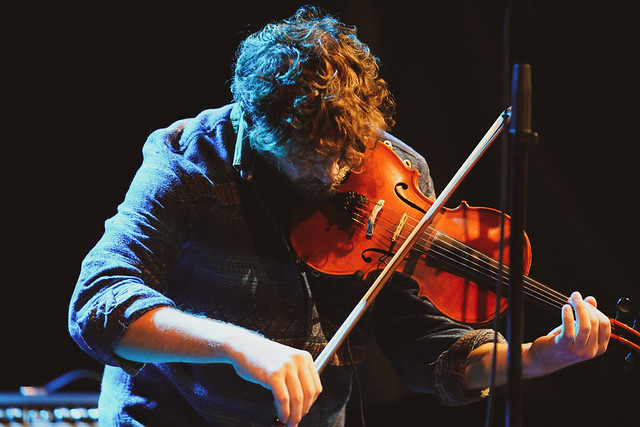 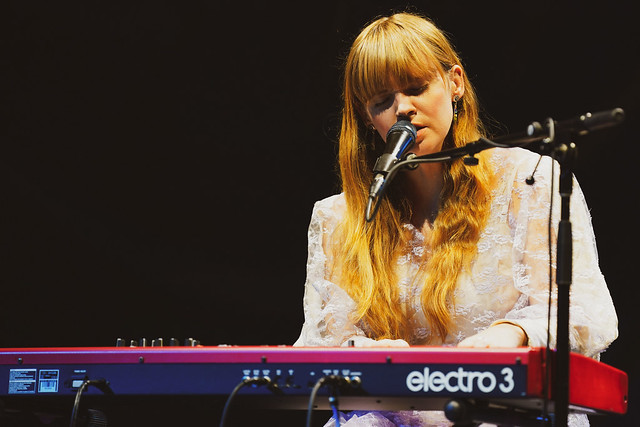 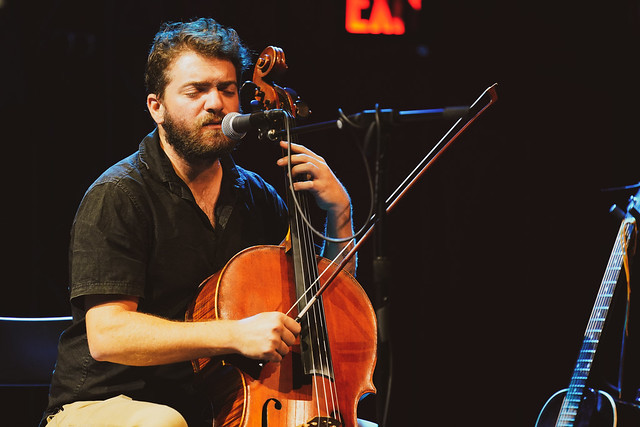 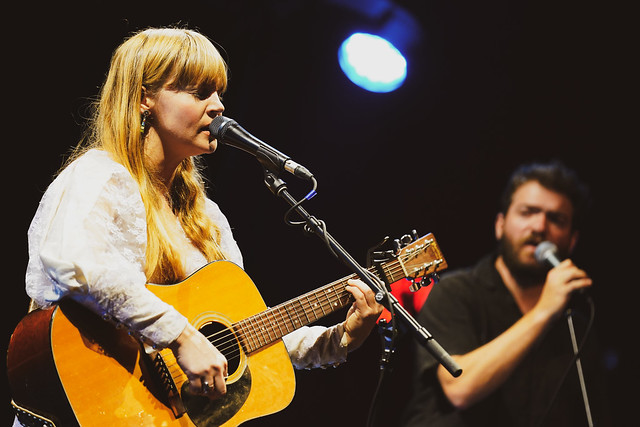 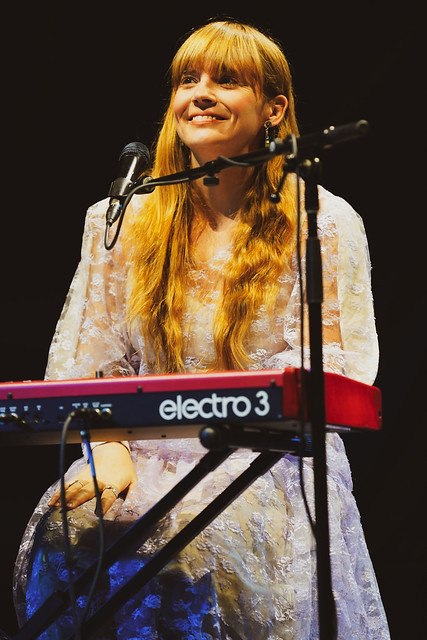 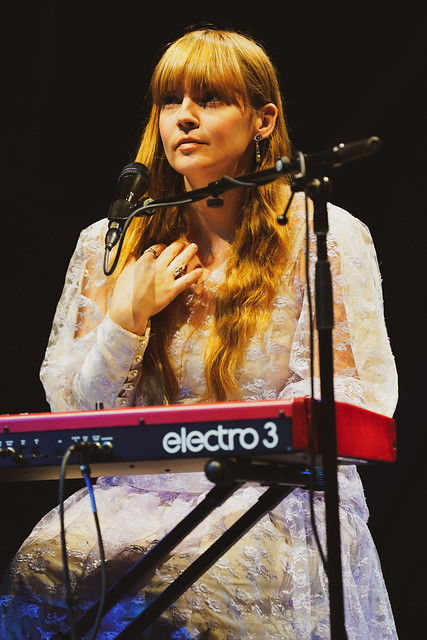 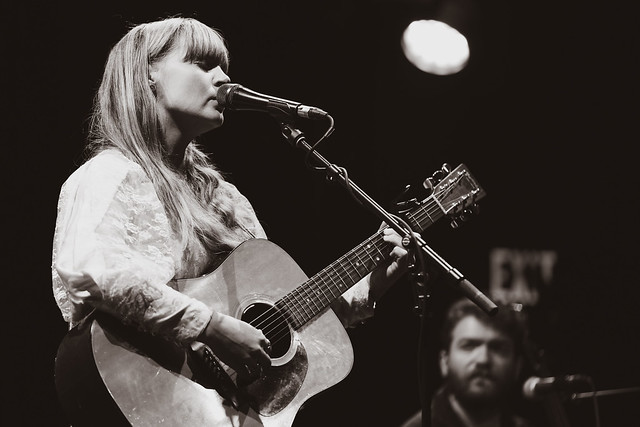 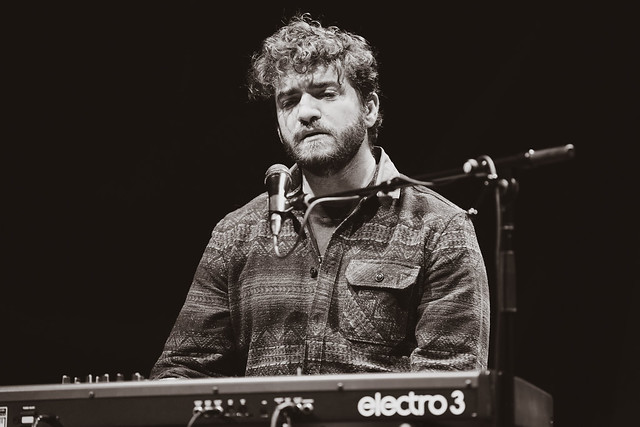 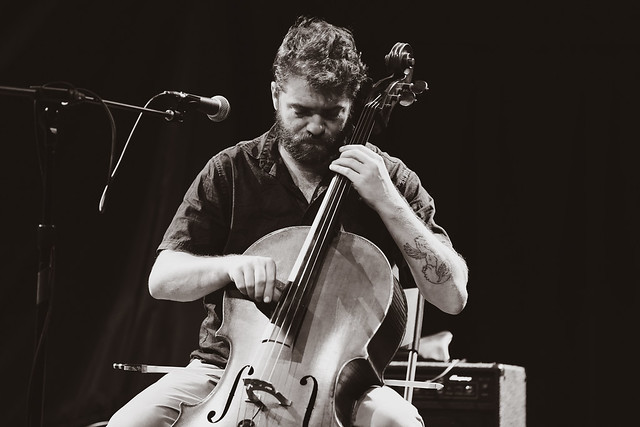 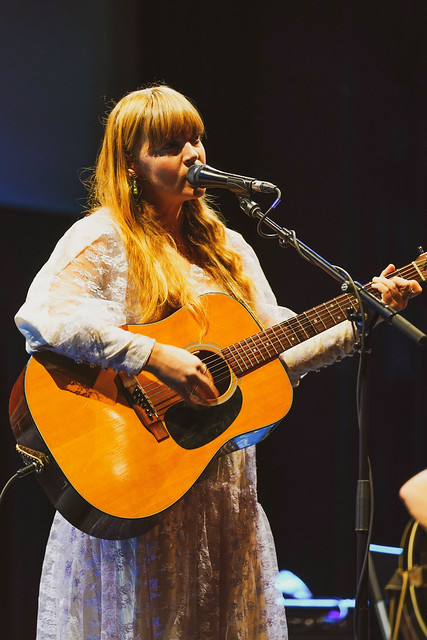 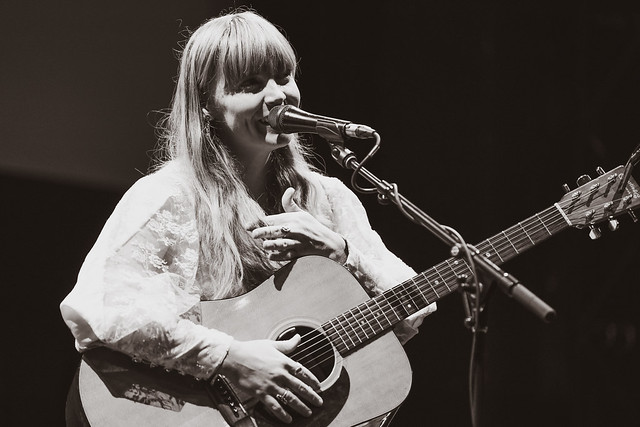 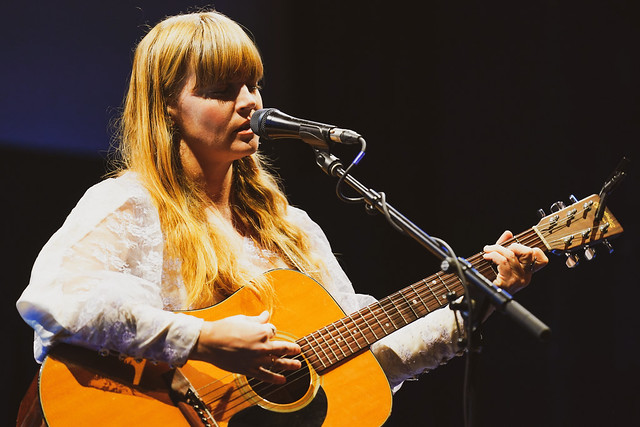 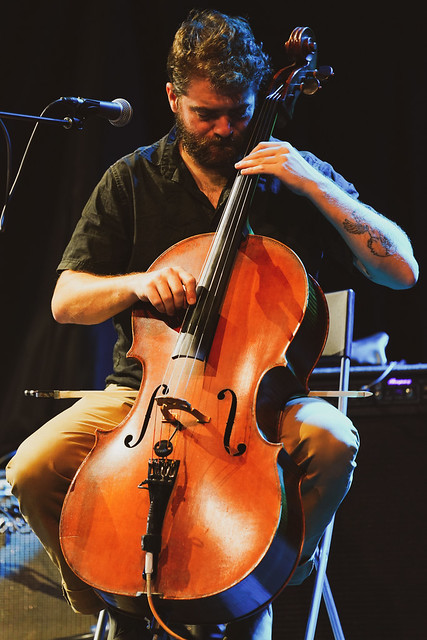 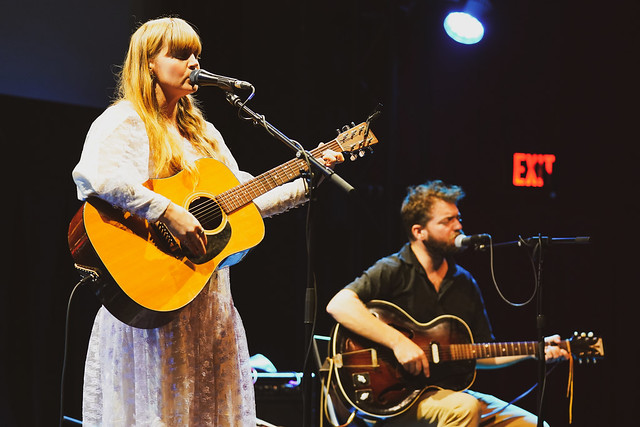 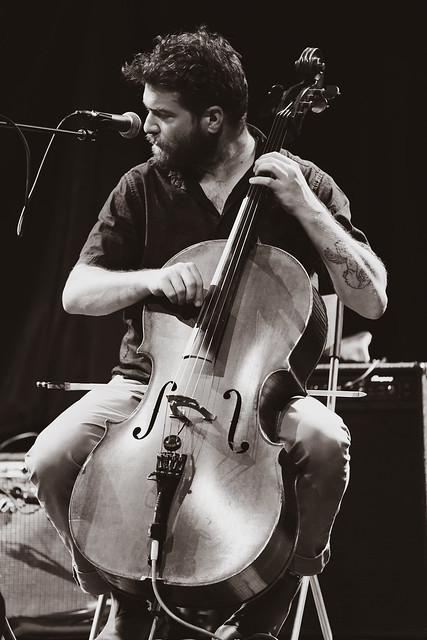 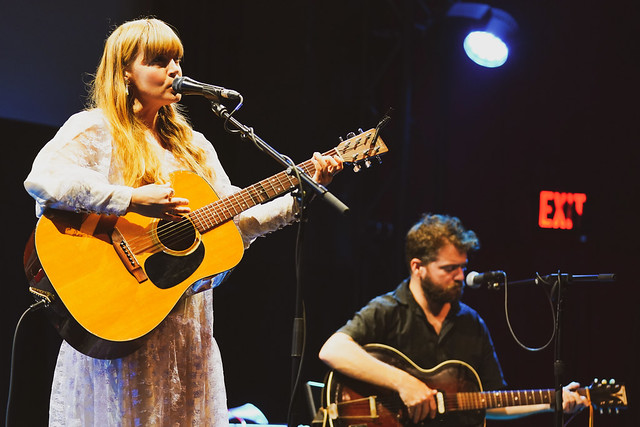 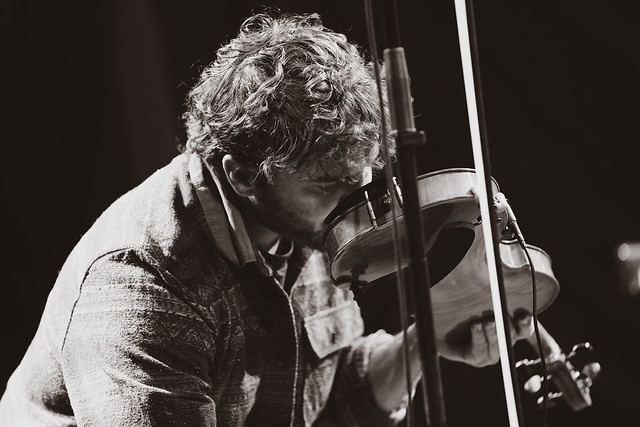