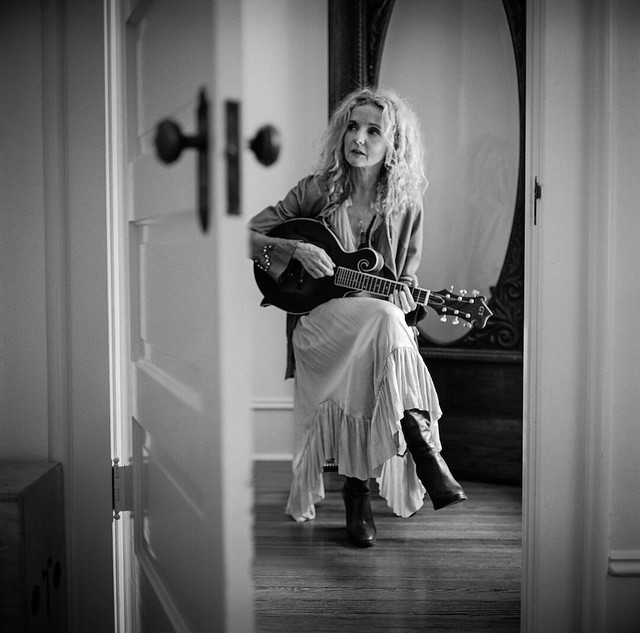 Alexandria’s Birchmere has long been known as a hub in this area for roots music. It recently welcomed back a frequent visitor in Patty Griffin, as well as a musician new to the venue, Gregory Alan Isakov. The two celebrated folk artists, each accompanied by a sideman, played a split set, then joined each other onstage for an encore.

In her celebrated career, Griffin has received strong critical reception and a number of awards. Most recently, she took home a Grammy for Best Folk album for her latest, self-titled 2019 release. This was her second Grammy, following a win for Best Traditional Gospel Album for 2010’s Downtown Church, a set of covers that she made entirely her own. She’s also a favorite of the Americana scene, and in 2007 she won Artist of the Year as well as Album of the Year, for Children Running Through. Diverse artists, including Miranda Lambert, The Chicks, Mary Chapin Carpenter, Solomon Burke, and Jessica Simpson, have covered her songs.

Griffin grew up in “a little town in Maine, Oldtown.” She described her father as “a Boston Irishman,” who married an Oldtown girl and settled there, raising his six children, of whom Patty was the youngest. “Faithful Son,” she explained was written about her father’s daily life in that small town, during the period when he was about to pass away. Introducing the song, she mentioned that her hometown was on the land of the Penobscot nation, and asked if many folks in the audience had the day off for Indigenous Peoples’ Day. That drew an enthusiastic response, though she was met with silence when followed up by asking if there were any indigenous persons in the audience. She recovered quickly, making a remark to the effect that it’s better not to say you’re indigenous, than it is to try to claim based on a genetic profile that shows 1% Native American heritage.

Stream the 2019 self-titled album by Patty Griffin on Spotify:

Though she bought her first guitar at 16, Patty didn’t start playing or writing music until her 30s. From her first album, 1996’s Living With Ghosts, it was clear she bought an unusual maturity to her songwriting, along with a voice that could “rattle fences.” Over the years, her songwriting has only deepened and grown richer, and the quality of the songs is breathtaking on her latest record, which followed a four-year gap after 2015’s Servant of Love. During that time, she survived breast cancer. Patty shared several of these songs in her set Monday night. “Hourglass” is a reflective an examination of the cycles of a person’s life, while “Luminous Place” manages to be spectral yet convey the healing powers of love and acceptance.

Rather than focusing mostly on her latest material on Oct. 11, Patty’s set ranged across the broad expanse of her career. “Useless Desires,” “When It Don’t Come Easy,” “Love Throw a Line,” and “Standing,” were drawn from 2004’s Impossible Dream. Introducing the last of those, she said, “I listen to a lot of American gospel music. I decided to try to strike out and write my own.” For the title track off of Servant of Love, she switched to the piano. She commented that one of the benefits of the piano is that it disguises how short she is – 5-2 – and I feel that, being just a few inches taller. Later, she picked up the mandolin for her penultimate number, “Shine a  Different Way,” from the same album.

Like many in the folk world, Patty’s songs often speak to political concerns in the sense that they speak to the struggles and concerns of working-class folks. “250,000 Miles,” she explained, was inspired by “an article about people coming from Nepal to build the skyscrapers in Dhubai.” There was something deeply affecting to her in the idea of people from this ancient culture in the Himalayas relocating to build ultra-modern structures in the middle of the desert sands. “Where you are on Earth,” she said, “you’re about 250,000 miles from. It [the song] is about all those people, far from home, looking up at the moon, and thinking about home.”

Throughout her set, Patty was accompanied by her frequent musical collaborator and multi-instrumentalist David Pulkingham. David is well-known as an ace musician in Austin (where Patty now lives), who has worked with a number of artists and bands based in the area. I’ve seen Patty both alone and with a band (that included David), and his presence seems to spur her to a higher level of energy. Patty and David played a fantastic hour-long set that concluded with a spirited performance of “No Bad News,” from Children Running Through, on which David accompanied her on tambourine.

Gregory Alan Isakov comes from half a world away from Patty. Born in Johannesburg, South Africa, his family emigrated to Philadelphia when he was a child. By 16, he had joined a band, but, rather than immediately pursuing a professional career in music, after high school, he relocated to Colorado — where he’s now based —  to study horticulture at Naropa University. He began his music career while continuing to work as a gardener, and now he lives on a three-acre, working farm.

Isakov’s latest album, 2018’s Evening Machines, was also nominated for the Best Folk Album Grammy, ultimately losing to Patty’s album. His work has been compared to artists like Josh Ritter, Sufjan Stevens, and Andrew Bird; like Griffin, he is deeply influenced by Springsteen. Much of his set was drawn from this material, beginning with the haunted “San Luis.” After the song, he told the audience he’d “never played a dinner theater before.” He got a great reception from the crowd, though, and really seemed to enjoy himself. “Southern Star” captures the moonlit, dusky ambience of the album, as does “Caves,” while “Chemicals” ranged into his interests in agriculture and the environment. “Dark, Dark, Dark,” he joked, self-effacingly, “might be the happiest song you’ll hear all night.”

Rounding out his set, Isakov reached into his songbook, pulling out “Amsterdam,” “She Always Takes It Back,” “Liars,” and “Dandelion Wine.” He shared that he’s been making an album for the last year and a half, adding “There’s going to be a lot of pandemic songs coming out,” and proceeded to share his, which is unreleased.

For his set, he was accompanied by Steve Varney, who played a variety of instruments. They finished with “Wings of All Black,” which they dedicated to Arnie, who was celebrating his 31st birthday.

All four musicians took the stage together for an encore, and they swapped Springsteen songs. Patty played “Stolen Car,” which she’s recorded, and Gregory covered “Highway 29.” As they noted, the other day would’ve been John Prine’s 75th birthday, and they celebrated by covering his “All The Best.”

I’ve been listening to Patty’s music since I was 15, and she’s never disappointed me. Gregory is a newer discovery, but he’s just as good, and the pairing went down like a fine wine at The Birchmere.