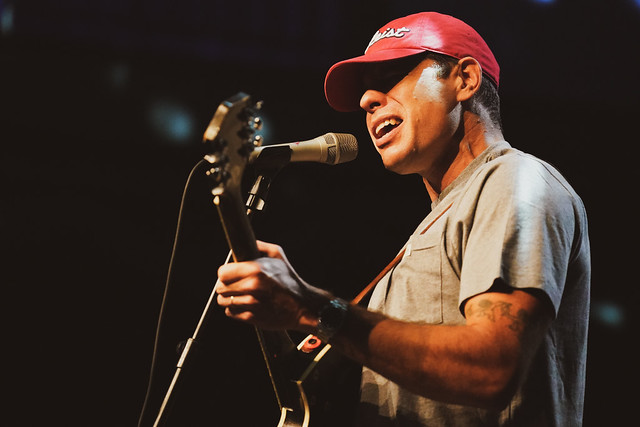 Some recording artists deserve to be admired for their commitment to enhancing their songbook, continually challenging themselves to dive deeper into a creative process that the average person can’t even begin to imagine.

A gentleman out of Ontario named Afie Jurvanen has proven himself to be exceptionally dedicated to his craft, and he recently brought his musical vehicle, Bahamas, to the 9:30 Club for what was an impressive, charming weeknight reminder that he’s one of the best individual performers hailing from north of the border — some might argue on the whole darn continent, and his collection of Juno awards and nominations supports that notion.

With a quick head nod and wave on Oct. 12, Afie walked onto the stage to warm applause and did what is rarely seen at the internationally known club, and that was perform by himself to a large assembly, owning the stage in solo fashion for all but a few songs in a 17-song set that spanned the five studio albums he has made thus far.

It just so happened to his ninth wedding anniversary, and Jurvanen opened the night with a miraculous version of his popular hit “Lost in the Light” from 2012’s Barchords, a song that as young as it is has already been covered regularly on the American folk scene.

“I send this song out to my wife — let’s go ahead and dedicate the whole night to her,” he said to enthusiastic cheers from the audience. Wearing an outfit like a random tourist visiting the city — plain grey T-shirt, with fold lines like it just came off the shelf; a Titleist golf cap with a Washington Nationals logo on the side — he’d immediately hooked them with his peculiar Canadian charisma.

Watch the official video for Bahamas’ 2020 release “Own Alone” from the album Sad Hunk via Afie’s official YouTube channel:

Pulling sumptuous sound out of any the guitar he held, Afie rotated between his Silvertone Jupiter and a Fender Telecaster as he worked through a carefully chosen slice of his original music, so much of it built off of his confessional, fervent lyrics and his style of play, which is clearly influenced by heavy blues, but with natural nuance and an irresistible texture that makes it as fresh as anything you will hear today on Indie rock streams or stations. Demonstrated at 9:30 Club, he has mastered weaving his voice — ranging from seductively deep to heightened testimony — with his permanent, shining chords.

Another one of his signature offerings, “Caught Me Thinking” translated to a mesmerizing live experience, a song that like many of Afie’s blends blues and rock with Afro-Caribbean sounds that might reveal themselves only subtly or for moments. But this also reveals his gift for making songs flow organically.

Afie performed a razor sharp, undeniably funky version of “Show Me Naomi” from his 2018 album Earthtones, showing that, while he experimented with new sounds on his last couple albums, even taking a hip-hop direction in some recordings, those tracks can still be distilled down to his voice and his guitar, and that’s all he needed to allure and keep the room in an upbeat groove for almost two hours.

He shared hilarious anecdotes about his songs, including the backstory to “Hockey Teeth,” a track from his 2009 premiere Pink Strat that he said he wrote about a girl who had buck teeth but was nevertheless a sweetheart — it’s just that kissing might have presented challenges. He had so much buy-in that, even if he was making it up as he went, no fan would have cared.

Quoting John C. Reilly’s character in the film Walk Hard: The Dewey Cox Story, Afie explained that he, like that protagonist, wanted to turn his “bad feelings into good feelings.”

“I wanted to write a song to cheer myself up,” and the end result was “No Depression” from Earthtones, an uplifting stroll that captivated and blatantly warded off bad vibes:

Everywhere I go
Yes, I get to feel so low
If I got depression”

A self-taught guitar player who has worked with an impressive list of bands and musicians, like Jason Collett, Feist, The Weather Station and Jack Johnson, Afie’s skill is matched by his modesty, and that might be what makes him that much more magnetic. His humor so gloriously dry that it could only be Canadian, he drew laughs in between just about every song, sharing his thoughts on random but important subjects like debt and providing color with frank, heartfelt dialogue about his life as a musician and husband.

“I’m always trying to write a better love song,” he said, sharing the pressure he puts on himself and his creative process. “My greatest goal in life is to write the greatest love song. I wasn’t that good when I started. I can tell you that. But I kept at it. I was ambitious.”

And even though his wife, upon first hearing it, said “it’s alright,” Afie stood by his song “Half Your Love” from his acclaimed 2020 album Sad Hunk, calling it an “honest” song that he thought was worth recording to vinyl. The compelling lyrics, crisp and clear at 9:30 Club, bolstered his stance on it:

“In a world where nothing’s clear
Two of us could disappear
No, we don’t need a reason just because
Lettin’ go of everything
I could fly on one good wing
There’s dreams enough with only half your love
People say that it’s good to wait
I don’t wanna wait for goodness sake
I promise I would only take
Half your love”

Watch Bahamas perform a live version of “Half Your Love” via Afie’s official YouTube channel:

Afie asked the audience to applaud the night’s opening act — Canadian Sam Weber and his band — and then invited Sam’s band back out to the stage for a handful of Bahamas songs with a full-band treatment.

Then, with the stage to himself after their departure, Afie captivated with mighty, hypnotizing versions of “Your Sweet Touch” and “I Got You Babe,” both compositions that queued him up to unleash wicked, ear-pleasing guitar riffs — two more achievements from his catalogue that are simply unmistakable.

He joked earlier in the night that, as a younger buck, he was paranoid that people would steal his riffs, and so he demonstrated his combatant: a red handkerchief used to cover the fret board that he called “Crouching Tiger, Hidden Riff” — and these songs, both recorded in 2012, justified his concerns nearly a decade later when played to a live audience.

Cracking up the venue, he called the standard practice of leaving the stage and returning for an encore a “charade” and a “waste of time.”

“Listen, tomorrow’s a workday — I get it,” Afie said, shrugging a shoulder.

Expressing how grateful he was to not only be on the road touring, but to visit the U.S. capital, he was earnest in telling those on hand that it was a night that mattered to him. He pointed out that he first played the club about 20 years ago, and he seemed unsure of how many times he’d been back since with different bands, but he was certain that the club should be embraced by those local to it.

“This is a special place,” he told the crowd at the end of his set, just before sending ticketholders off with “All The Time” from 2014’s Bahamas Is Afie.

“You should be coming here six nights a week,” Jurvanen said. “Come here and eat dinner here. Take care of these places so they survive.”

Here are photos of Bahamas, as well as the night’s opening act Sam Burton and his band, performing at 9:30 Club on October 12, 2021. 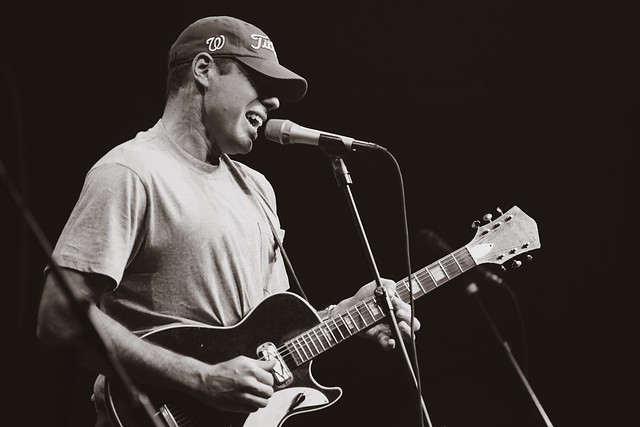 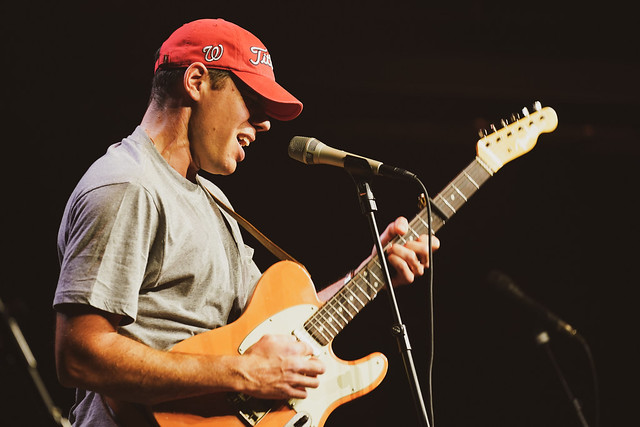 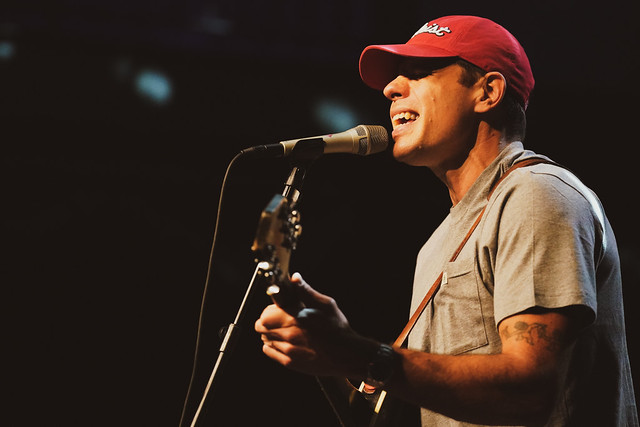 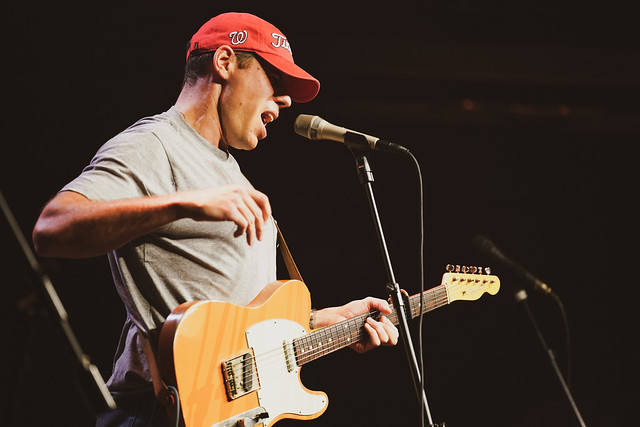 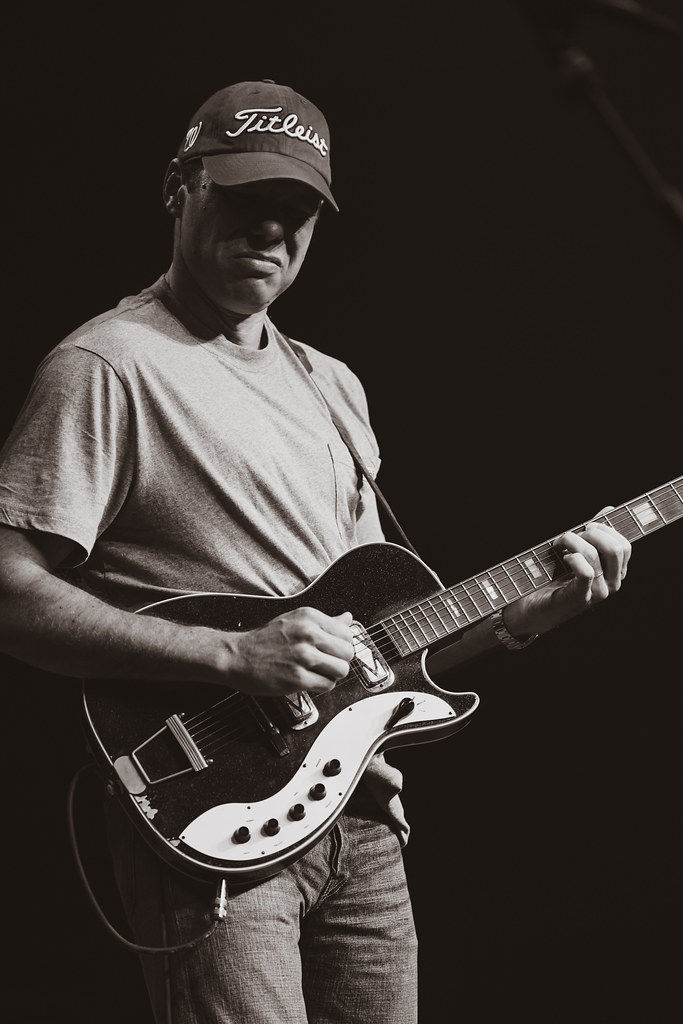 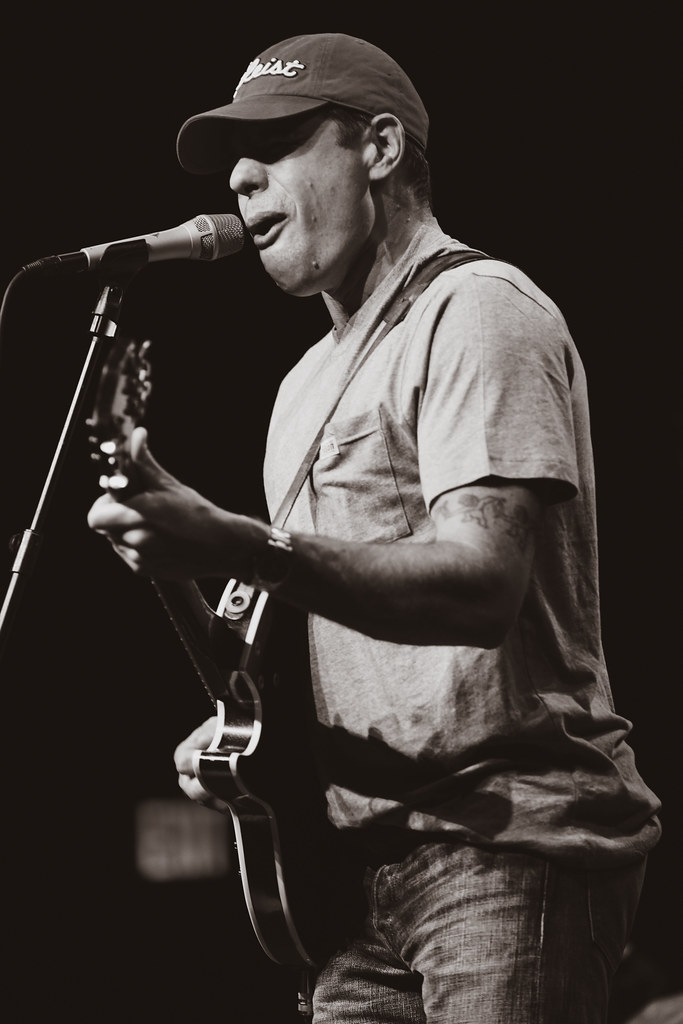 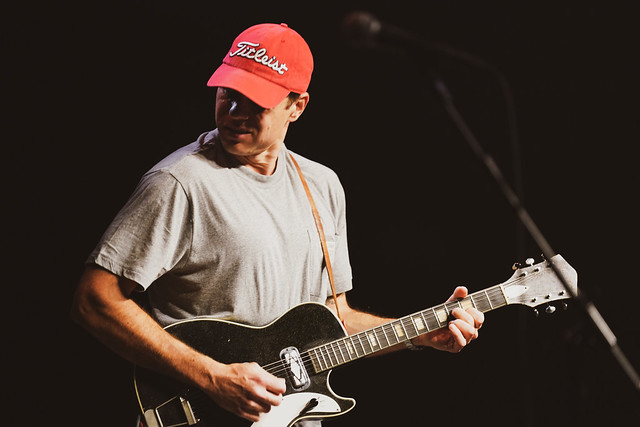 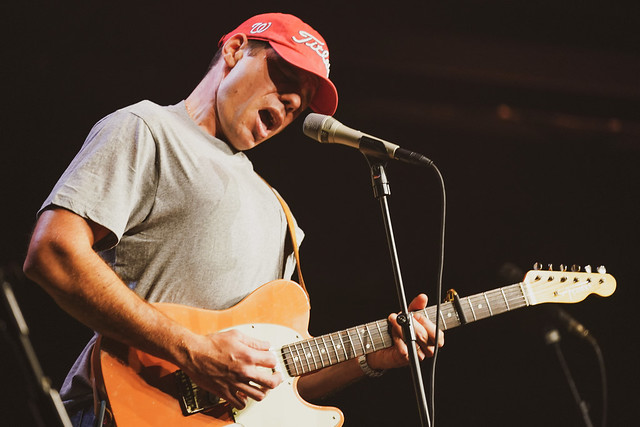 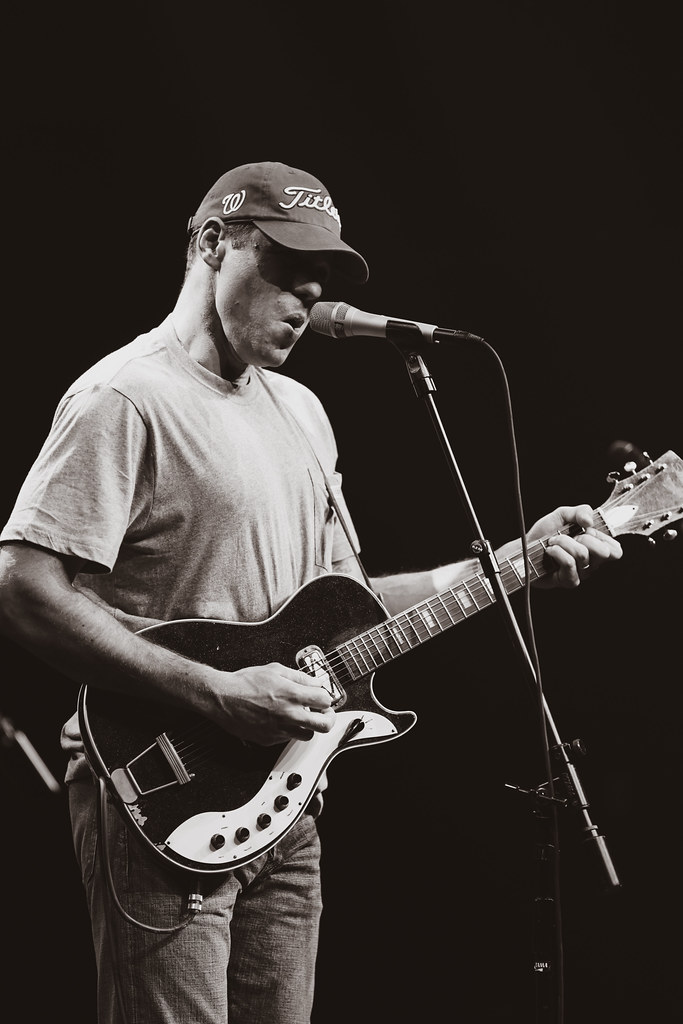 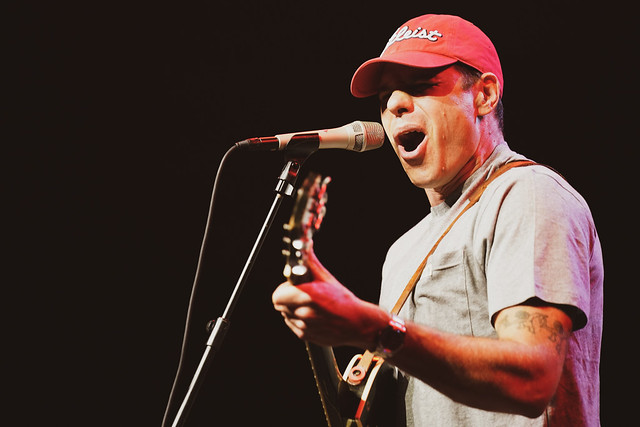 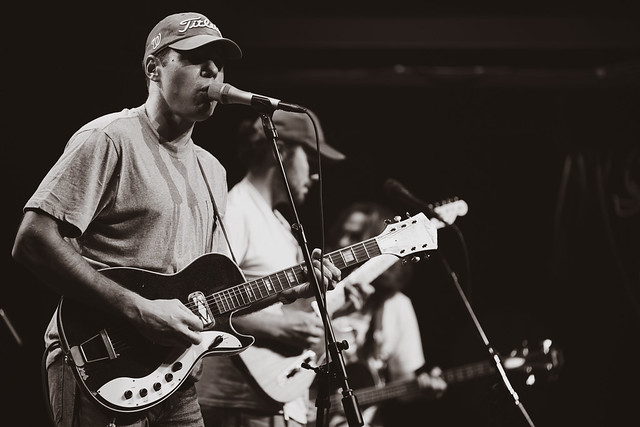 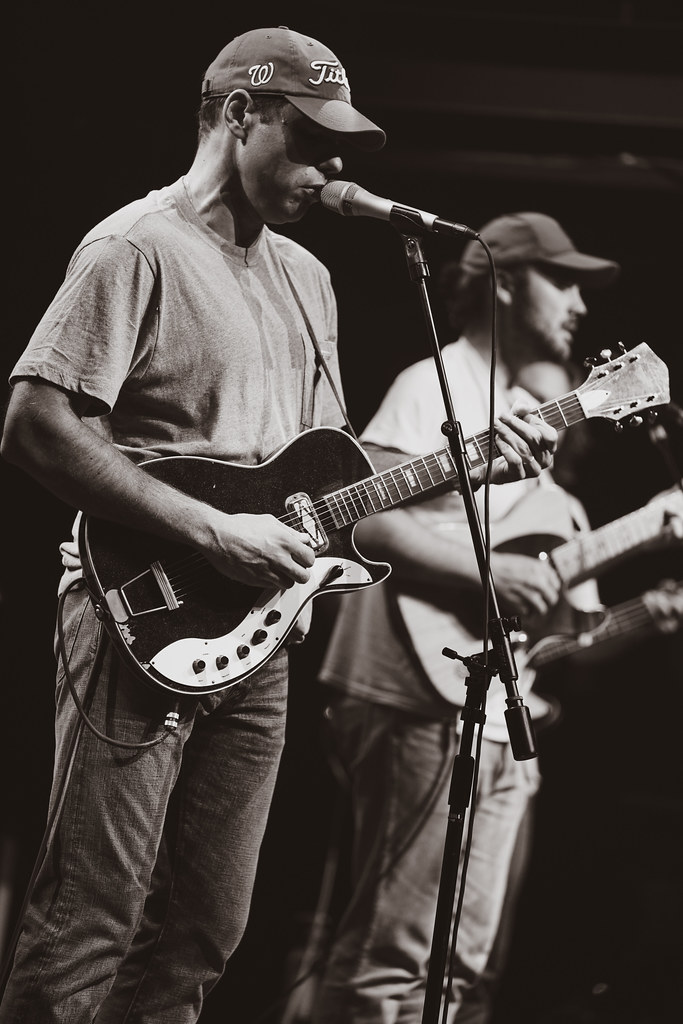 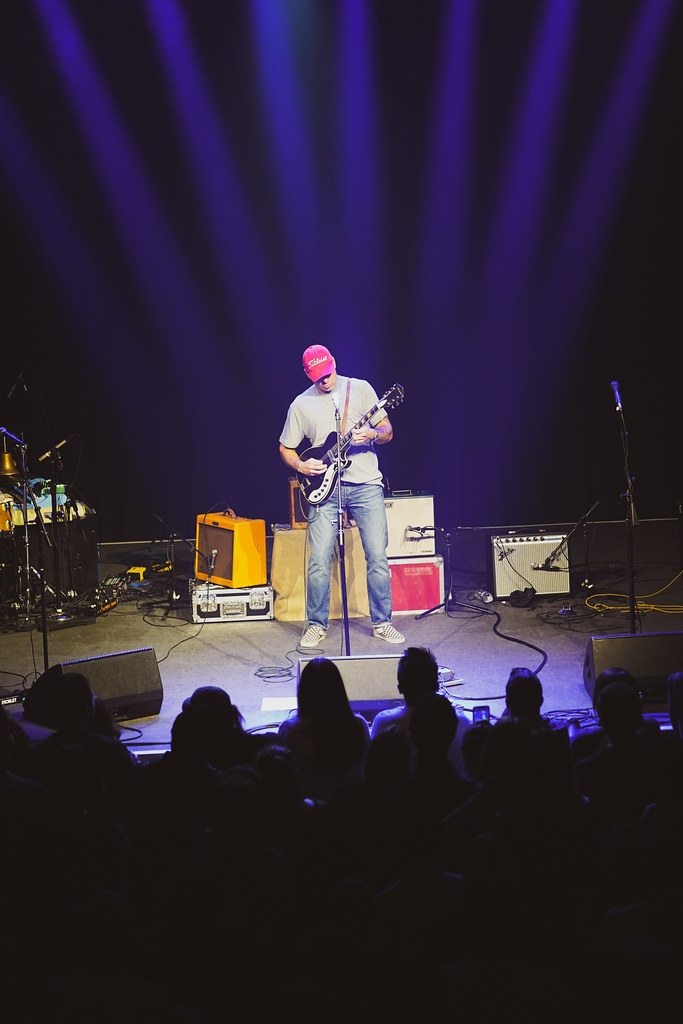 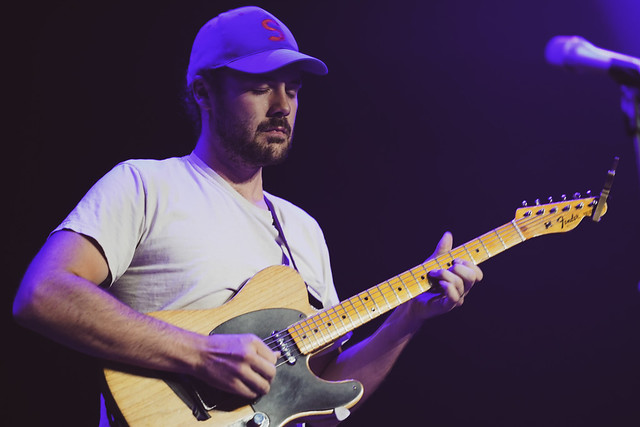 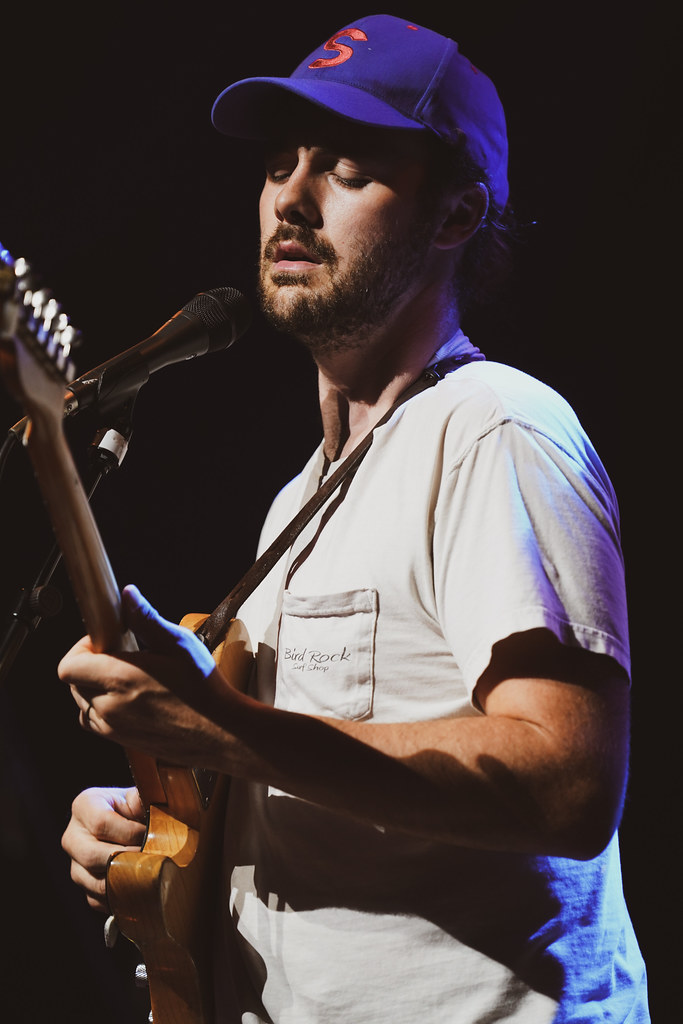 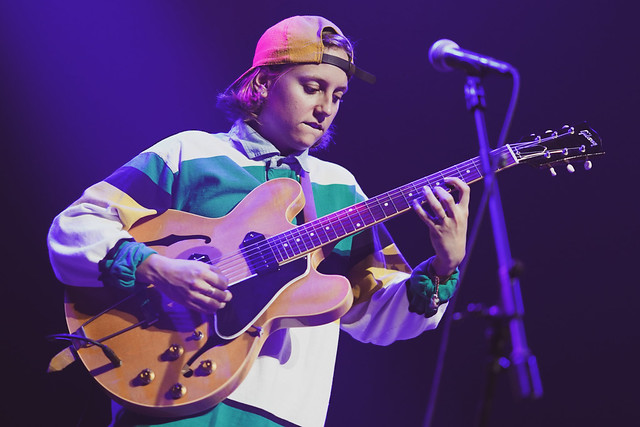 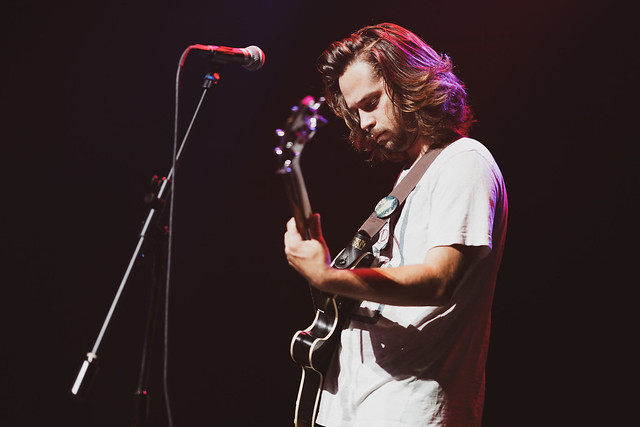 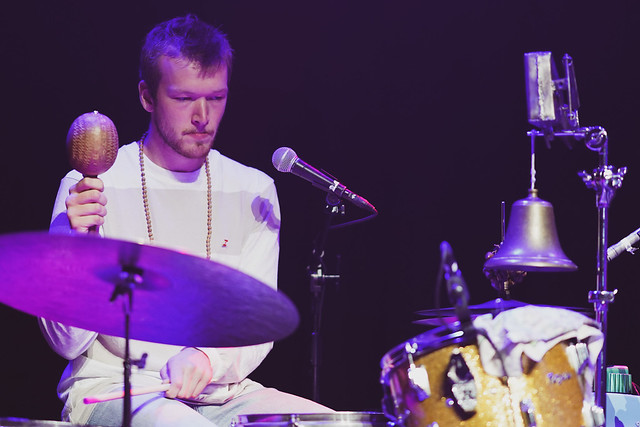 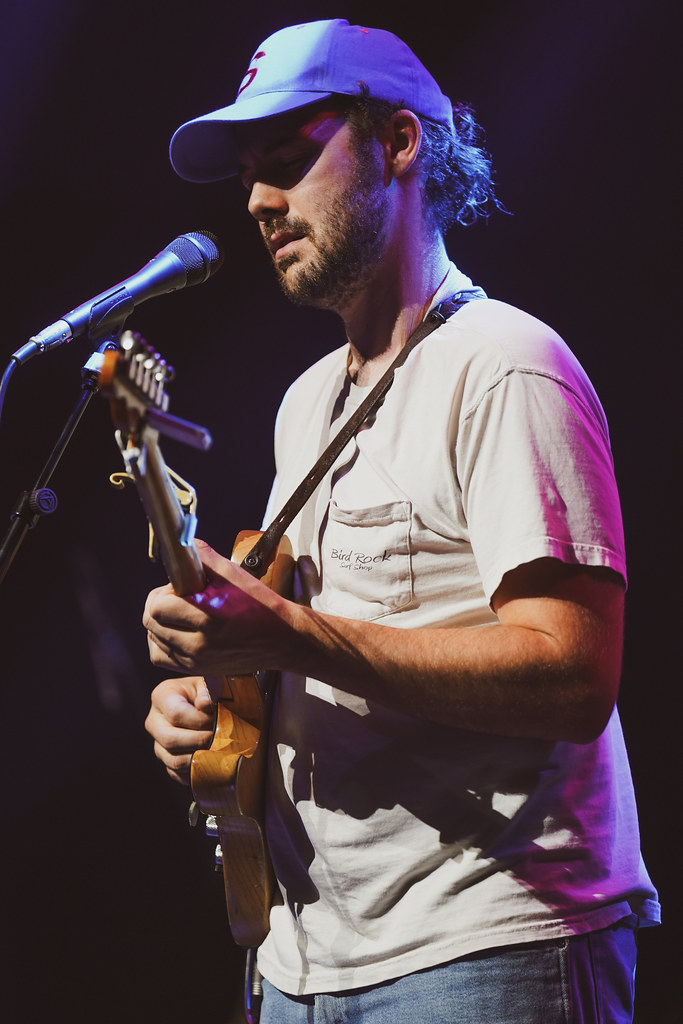 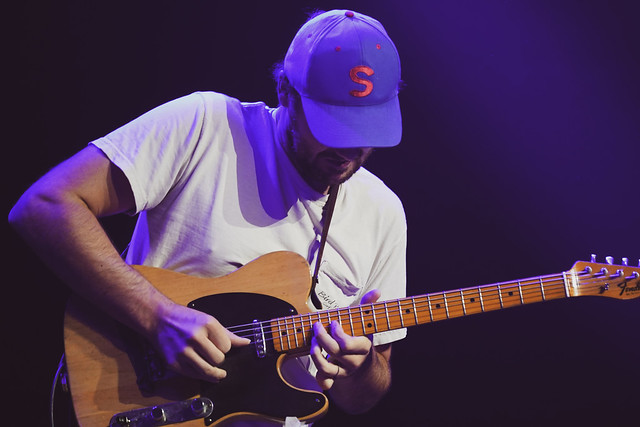 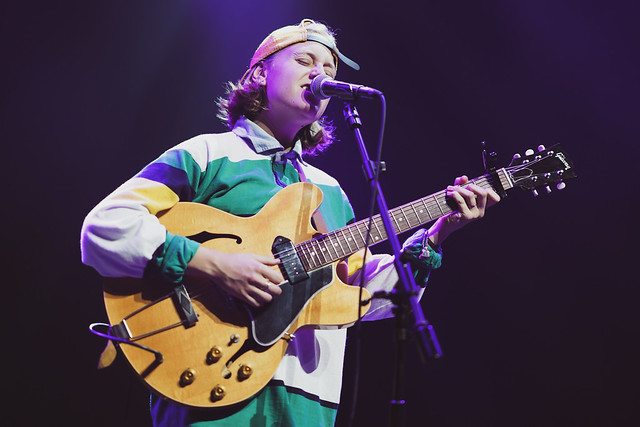 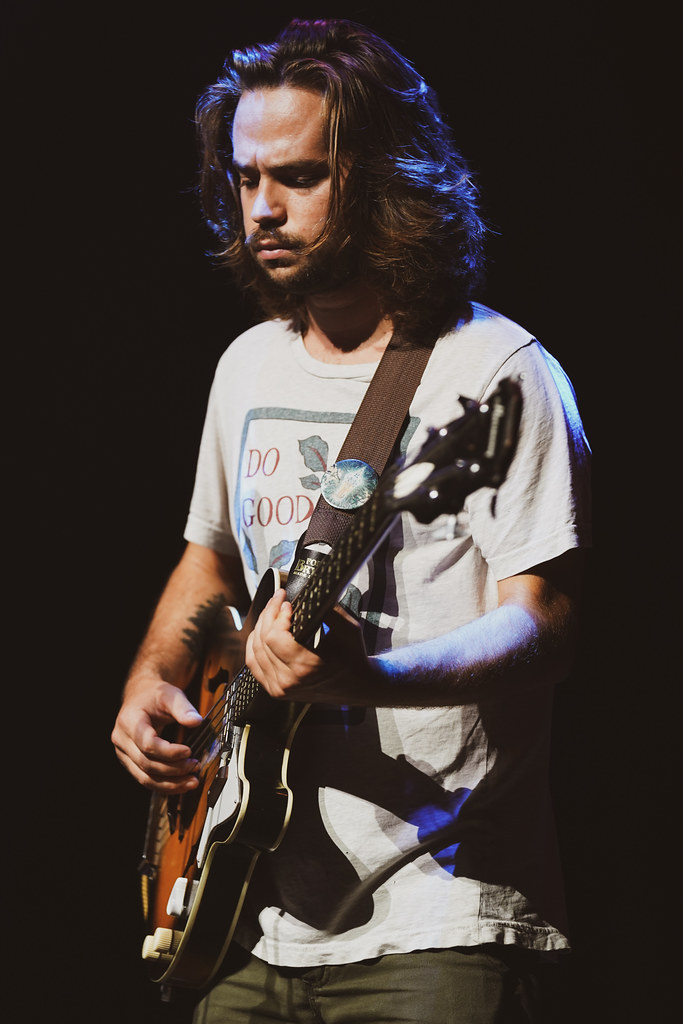 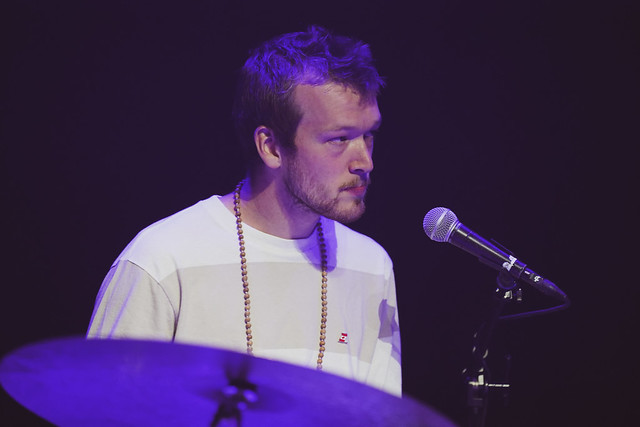 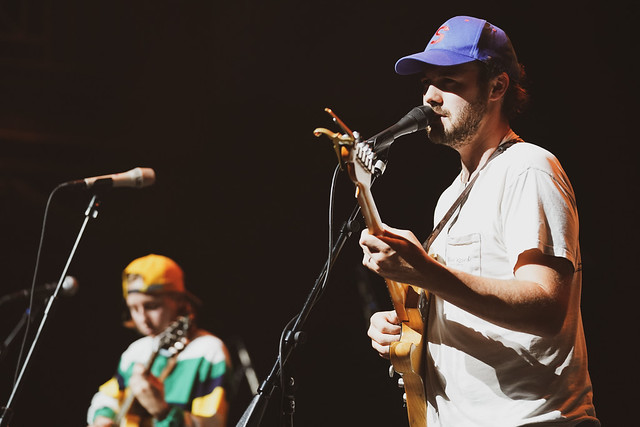 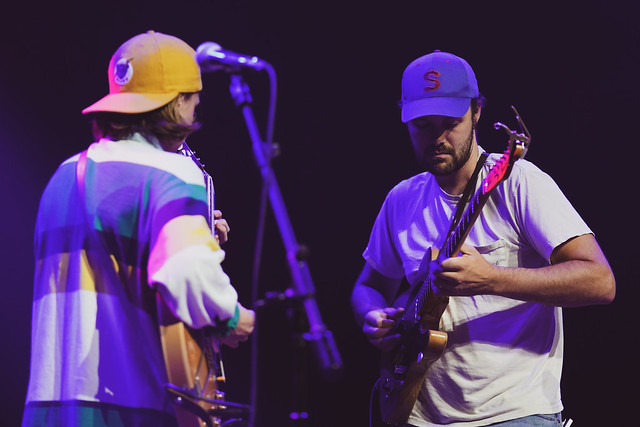 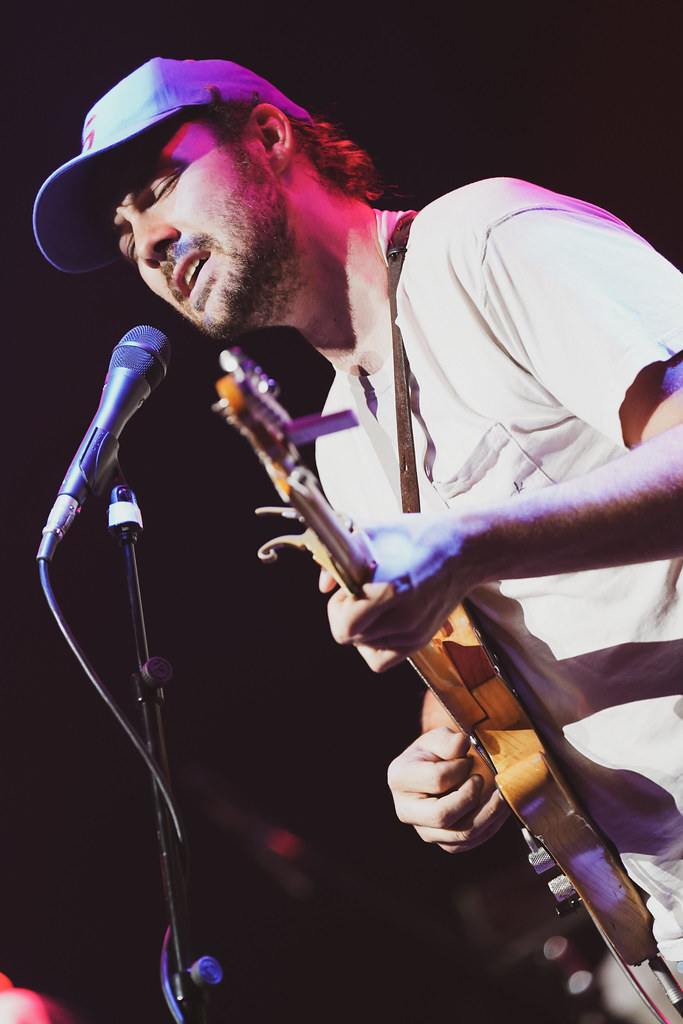