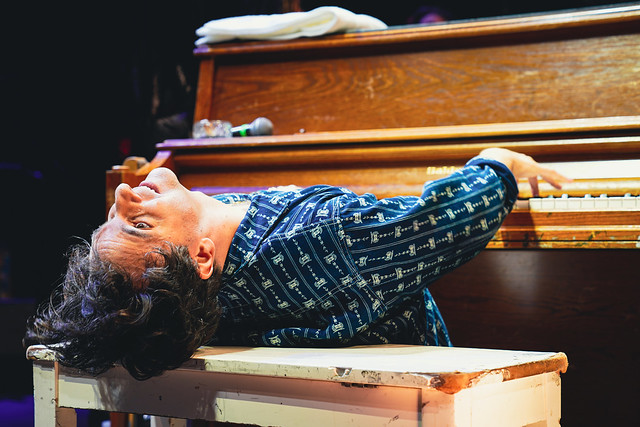 And if you’ve been lucky enough to see the Philadelphia-based sensation Low Cut Connie in the flesh, you know you’ll witness sweaty clothes torn to shreds, scantily clad dancers, spilled drinks, middle fingers pointed at innocent bystanders and cuss words flung in all directions. Sex, drugs, rage, grief, pain, joy, lust, love, jealousy — no topic is off limits, no subject too risqué. That’s the mentality head singer and pianist Adam Weiner brings to the keyboard, and within that kind of environment is where his crew has been groomed to thrive.

Adam and Low Cut Connie brought their best to 9:30 Club recently, delivering a dripping set of music that was uncensored, remorseless, and lasting, even in a venue that hosts as much talent as this one.

A showman on the level of Freddie Mercury with mysterious dark eyes that can capture anyone and a keen sense for directing his ever-morphing band, Adam has drawn wide critical praise, even becoming a favorite of legends like Elton John and Bruce Springsteen. He oozed confidence and put his passion on display for all to see on Oct. 13 in what was LCC’s second time headlining 9:30 Club.

Adam cut his teeth years ago as a piano player working in New York City’s gay bars, and he isn’t just the leader of the band, he’s its source of nourishment. And from the first few notes on his weathered piano — this one had the name “Nellie” scratched on the right side — the seven other members of the group clearly fed off of his seemingly unlimited supply of fervor and guts.

Watch Low Cut Connie perform “All These Kids Are Way Too High” on Late Night With Seth Meyers on YouTube:

Before an enthusiastic crowd and one local enough to familiar with all that Low Cut Connie throws at you, Adam pulled from all of the band’s six wildly entertaining studio albums dating back to the 2011 premiere Get Out The Lotion, which was recorded in a garage in Florida when the band looked a little bit different and didn’t even have an official name.

“I love every mother fucker in this place,” Adam said from the piano, which throughout the night became a platform not just for his sound but his animation as he stretched across the beat-up wooden unit, stood on it, smacked it, even dry-humped the side of it.

“We’ve all been through some kind of change,” he continued. “Some good, some not so good. Me too. I want you to know that Low Cut Connie, we’re here for you, baby. You’ve helped all of us get through. So, I want to give you the best night ever.”

Showcasing some of the most loved tracks from the LCC songbook, Adam turned the stage into a plateau of unadulterated expression. He performed songs that helped thrust the band into the national spotlight, like “Boozophilia,” a track from 2012’s Call Me Sylvia that former President Barack Obama put on a publicly released Spotify playlist, as well as “All These Kids Are Way Too High,” a cut from Dirty Pictures (Part 2) that garnered LCC additional buzz after the group performed it on Late Night with Seth Meyers.

Ticketholders at 9:30 Club were treated to a powerful take on “Charyse,” a raw rock-and-roll saga of a struggling woman being overwhelmed by the forces of some unforgiving megalopolis. Recorded on 2020’s Private Lies, this, like other artfully crafted Low Cut Connie songs, uses startingly authentic, heart-wrenching lyrics to illustrate a story, while a cutting-edge blend of instrumentation churns and progresses toward indisputable grooves.

Clearly and shamelessly moved by his own riveting words, Adam’s voice can crack when his songs are at their most intense or somber moments, and “Charyse” — an achievement in modern rock — was a fascinating example of this performed live at 9:30 Club, with one line in particular resonating with immensity:

“I saw this thing on TV about these kids in California
They ended up with HIV, they didn’t have any family.
It scared the shit outta me, I’m still thinkin’ about it six months later.

Aw, you got a gorgeous face, babe.
I only wanted to get closer.
You always pushed me away.
You said you want to fix it up.
Well it’s way too late, so please don’t do me any favors.”

In what has become a trademark of all Low Cut Connie shows, Adam eventually shed his button-down shirt, exposing a thin white tank top that didn’t contrast much from his pasty skin. As expected, or maybe unexpected for first timers, he eventually worked his way to the lid of his piano, and during the climax of “Shake It Little Tina,” Adam ripped it in half, performing the rest of the show with his bare chest reflecting the house lights.

While Adam himself is a world-class piano player, making the most raucous tunes look deceitfully nonchalant, he’s been supported for a good haul by Will Donnelly, a humble but electrifying guitar player who brings a universe of options to the band’s sound.

Will can shred like a veteran bluesman, he can distort and sustain a world of contemporary noise, and he knows how to chicly insert himself into the on-stage picture, adept to time both his notes and his choreography in ways that enhances the presentation — smirking the whole time, holding cinematic poses for the mirrorless cameras.

A classy wing man whose skillset makes him one to keep an eye on, Donnelly asserted himself through LCC classics like “Rio,” a chance for him to unleash treacherous, ominous riffs that propelled the song to a steady hammer as people in the audience screeched and sung along.

In fact, the crowd twisted and turned hips all night, led by the alluring, provocative dancing of backup singers Kia Warren and Liza Colby, who led the night’s opening act, Susu, plus longtime LCC contributor Abigail Dempsey, who also shred on the electric guitar all set long. This posse — brimming with stamina, glowing with elation and beautifully in synch with one another and the music — celebrated every song, adding immeasurable depth through their glorious, ringing tone and their intensity that became infectious.

Rounding out this rambunctious but well-oiled creation, you might think bass player Linwood Kirk, drummer Attis Clopton and percussionist Jarae Lewis have been involved since the band formed back 2010. Rather, they’re musicians whom Adam formed relationships with along the way, as he’s always looked to augment the sound for both live performances and recording sessions — he and Donnelly invited more than 30 to contribute to Private Lives, and they continue to forge those connections through their bi-weekly livestream, Tough Cookies.

When the dust settled on Oct. 13, Will, Abigail and the rest of Low Cut Connie were literally piled on the stage, like a bunch of kids exhausted after relentless horseplay. Blowing a kiss to the crowd, Adam marched off the stage with determination and stamina, lifted up and enriched from this gig, already exhilarated for the next.

Here are images of Low Cut Connie performing at 9:30 Club on Oct. 13, 2021. All photos copyright and courtesy of Casey Vock. 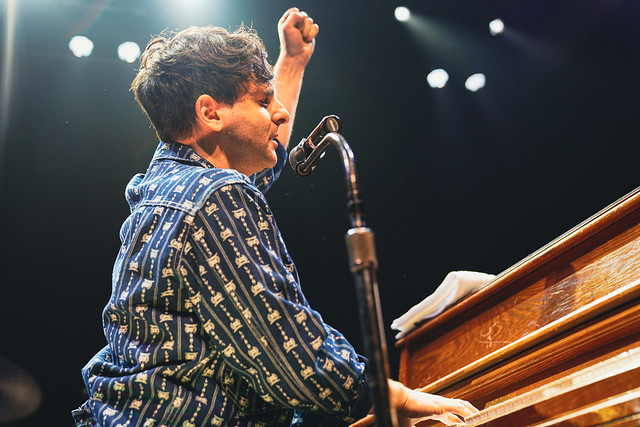 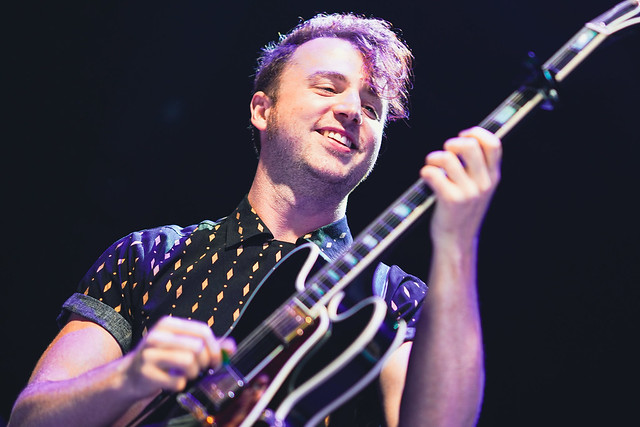 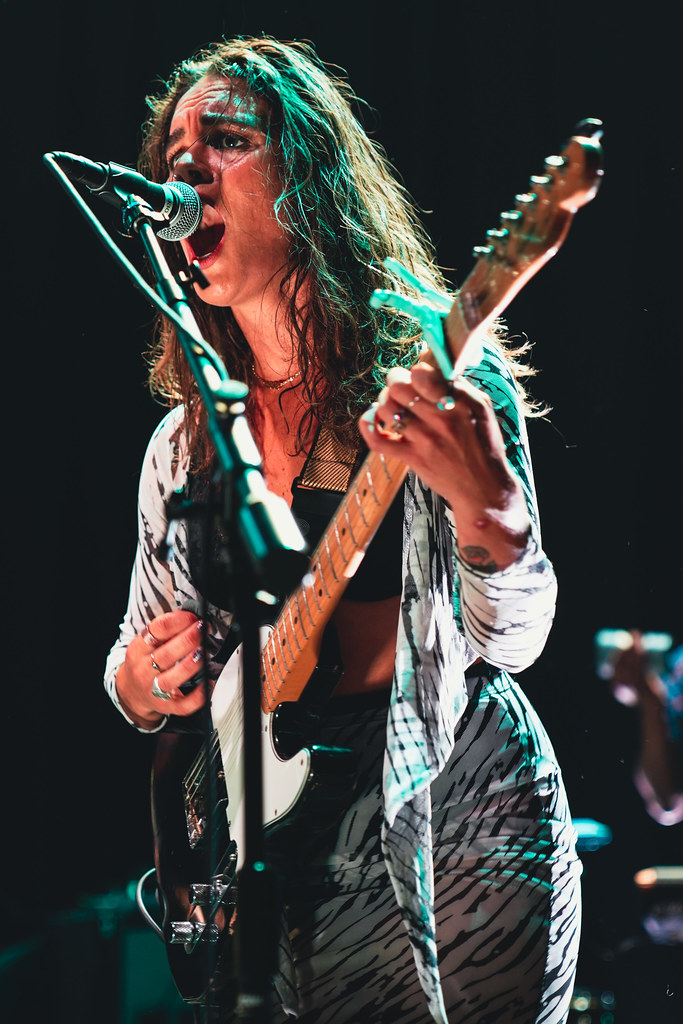 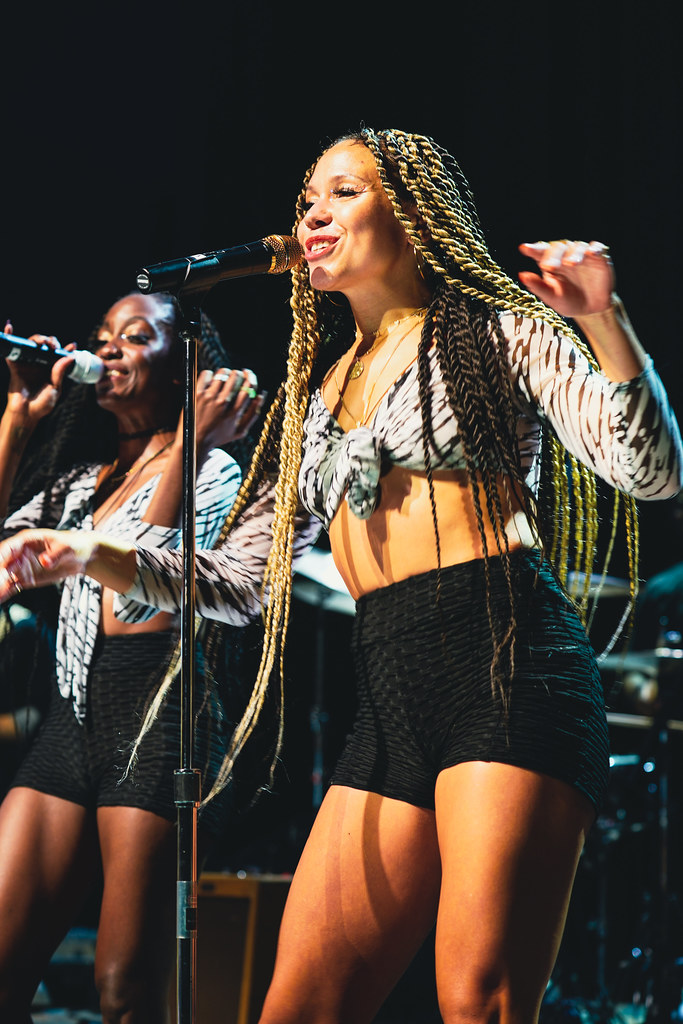 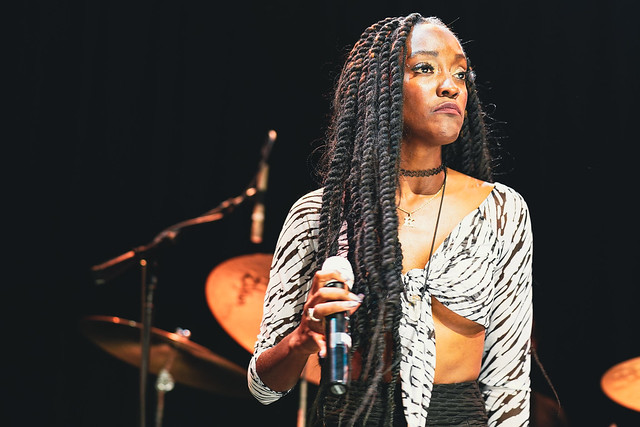 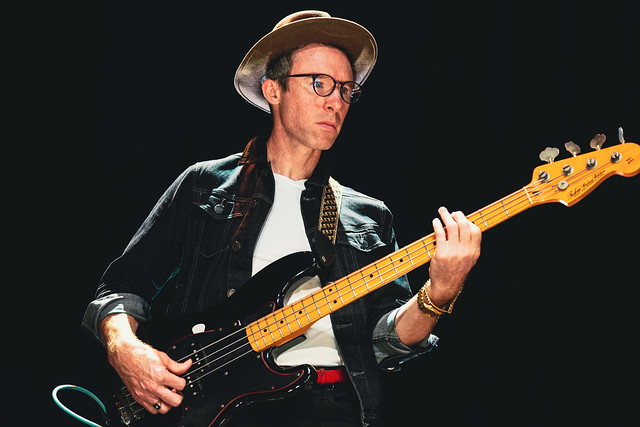 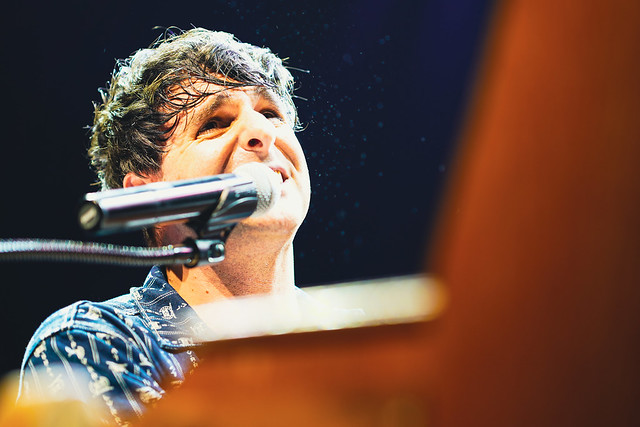 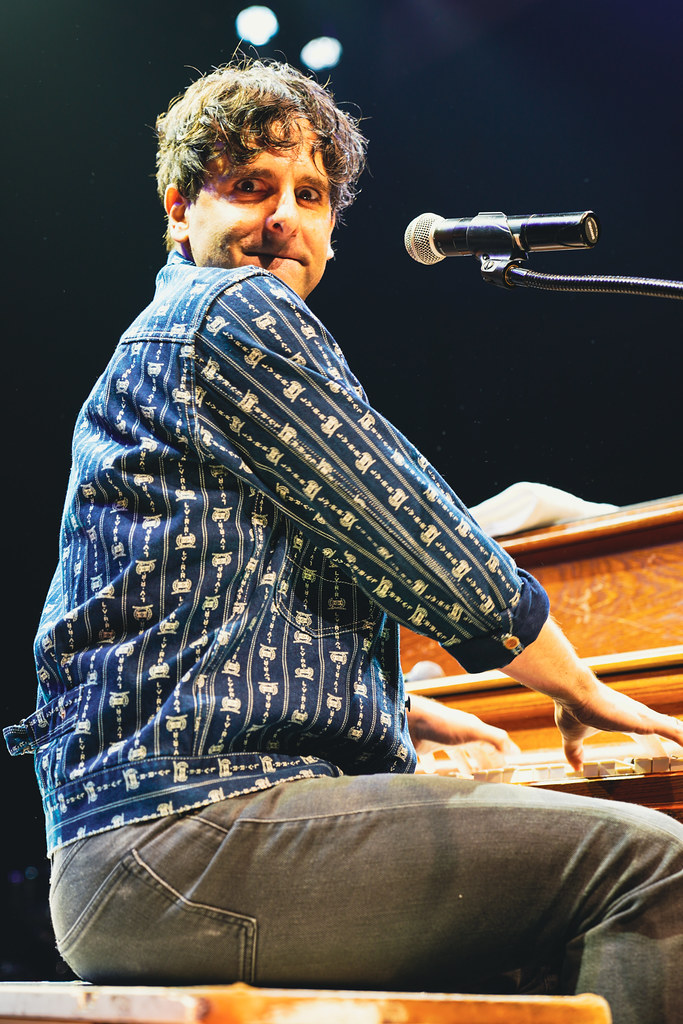 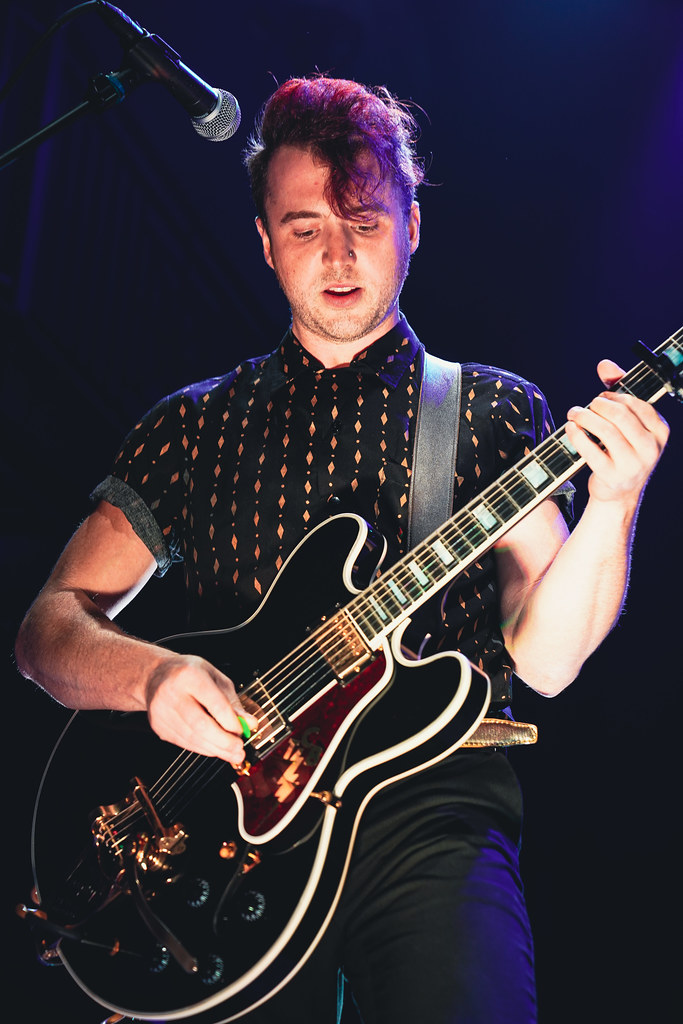 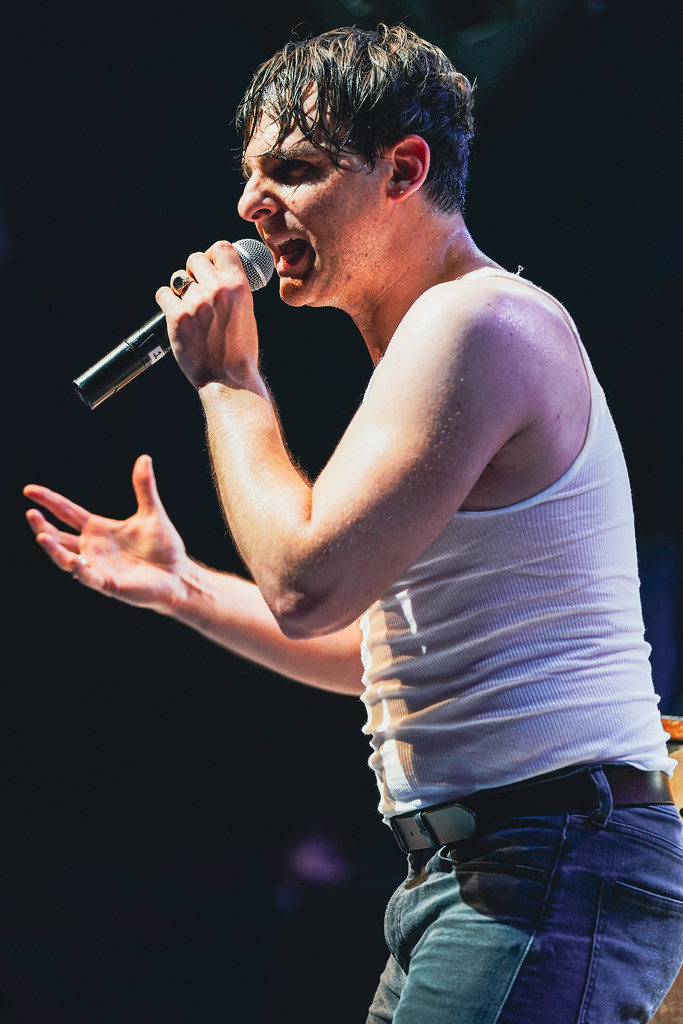 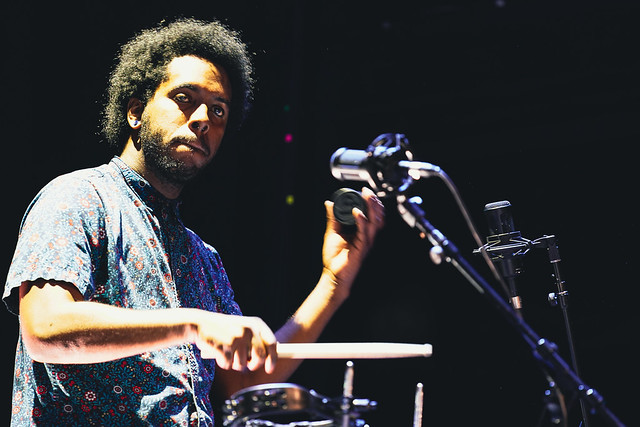 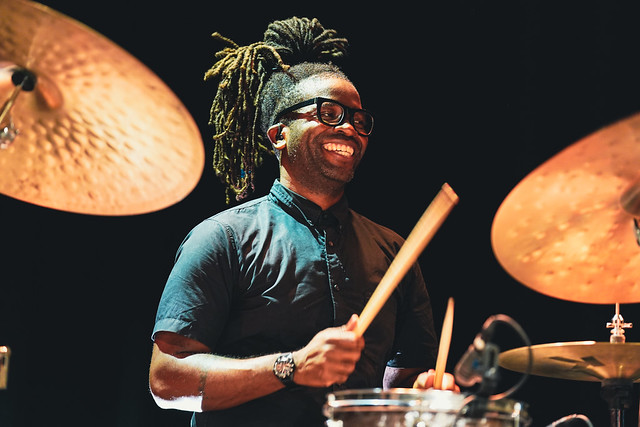 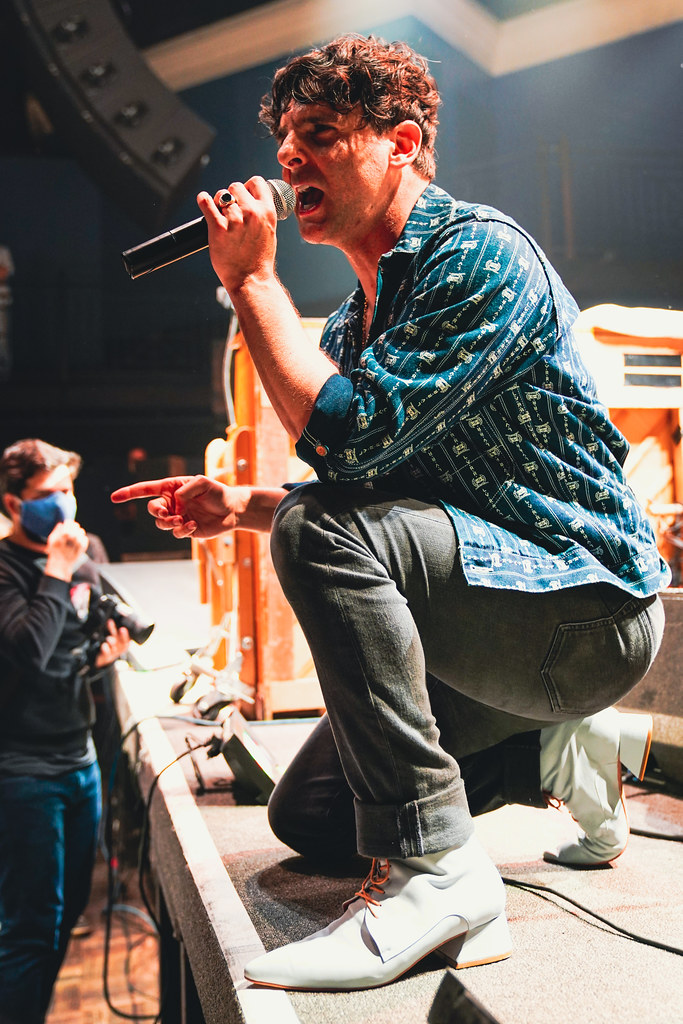 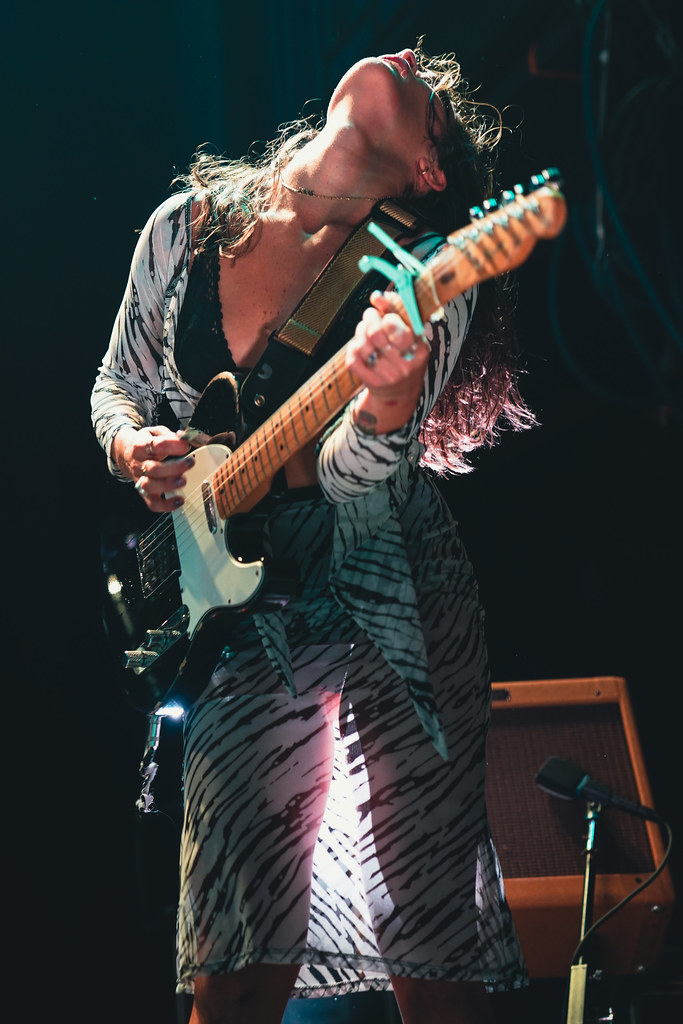 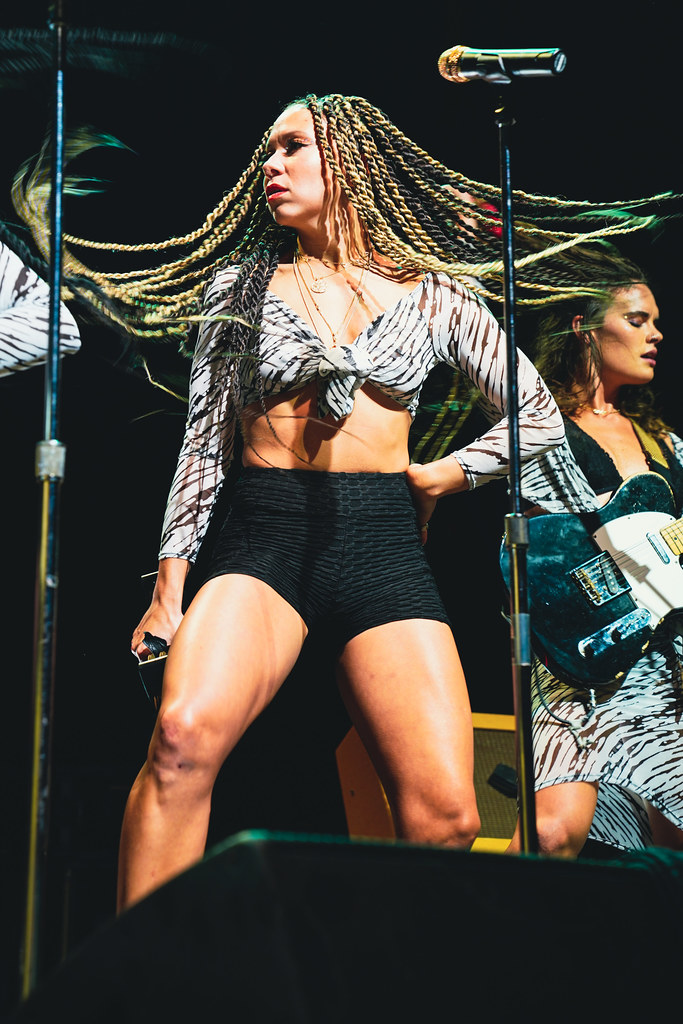 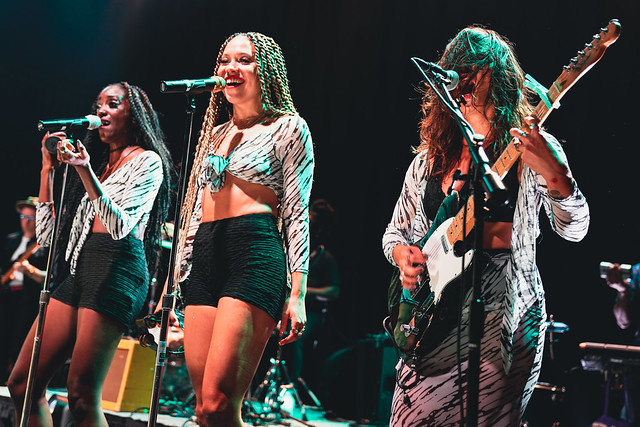 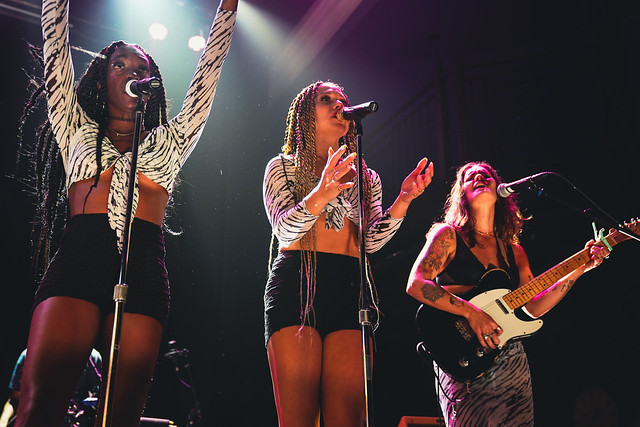 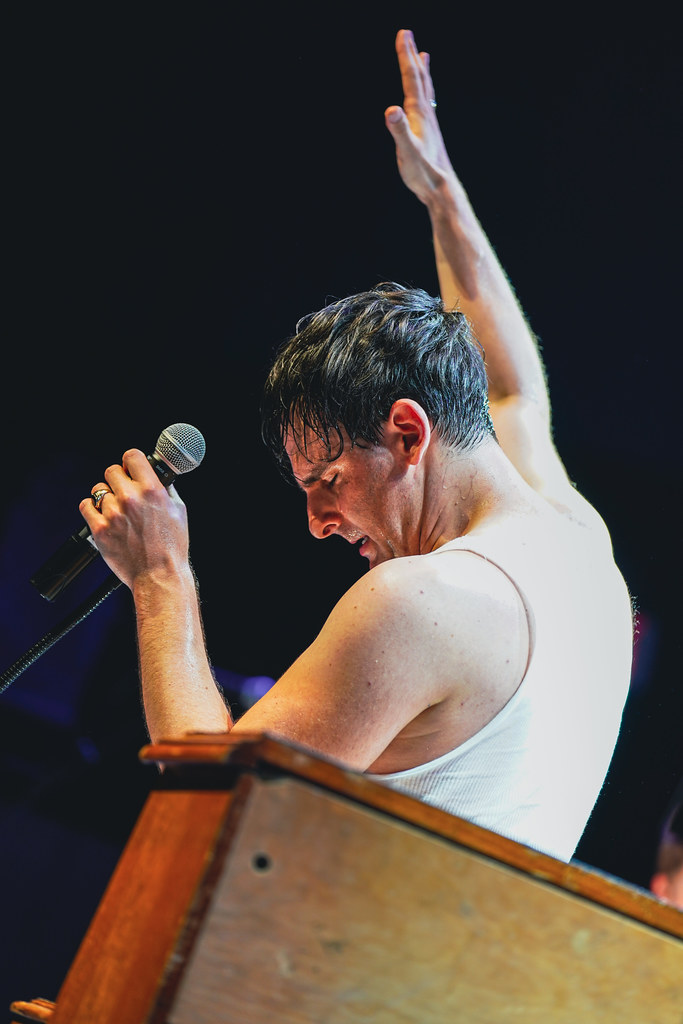 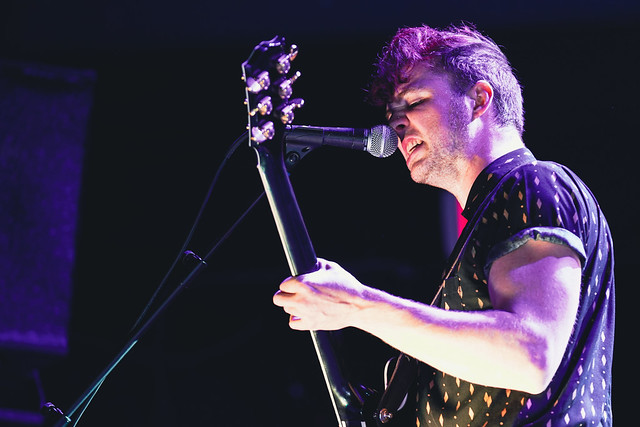 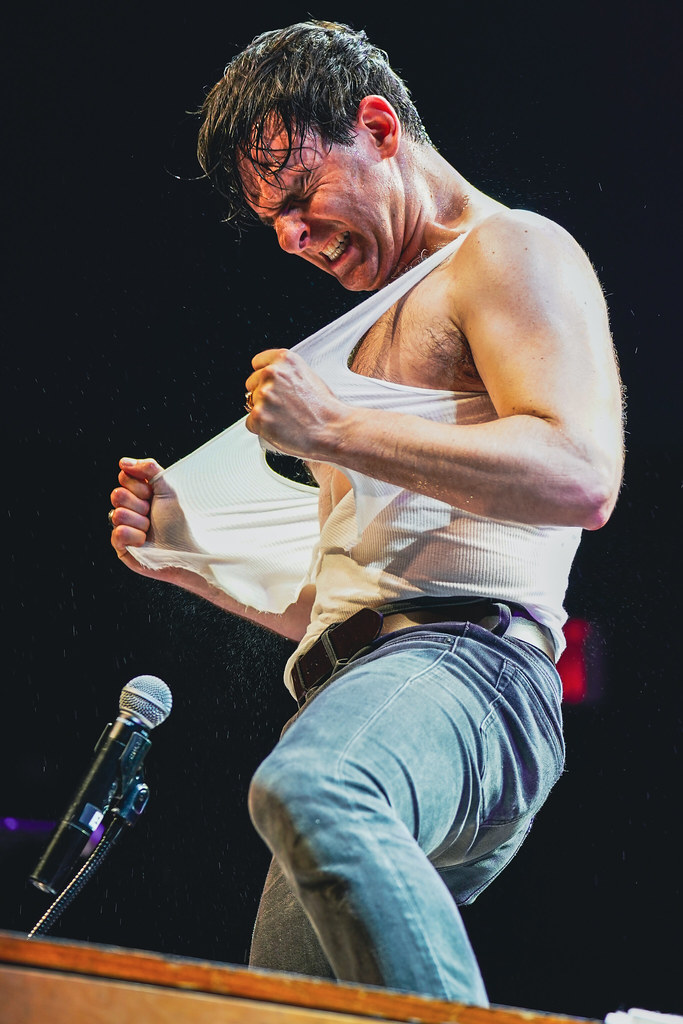 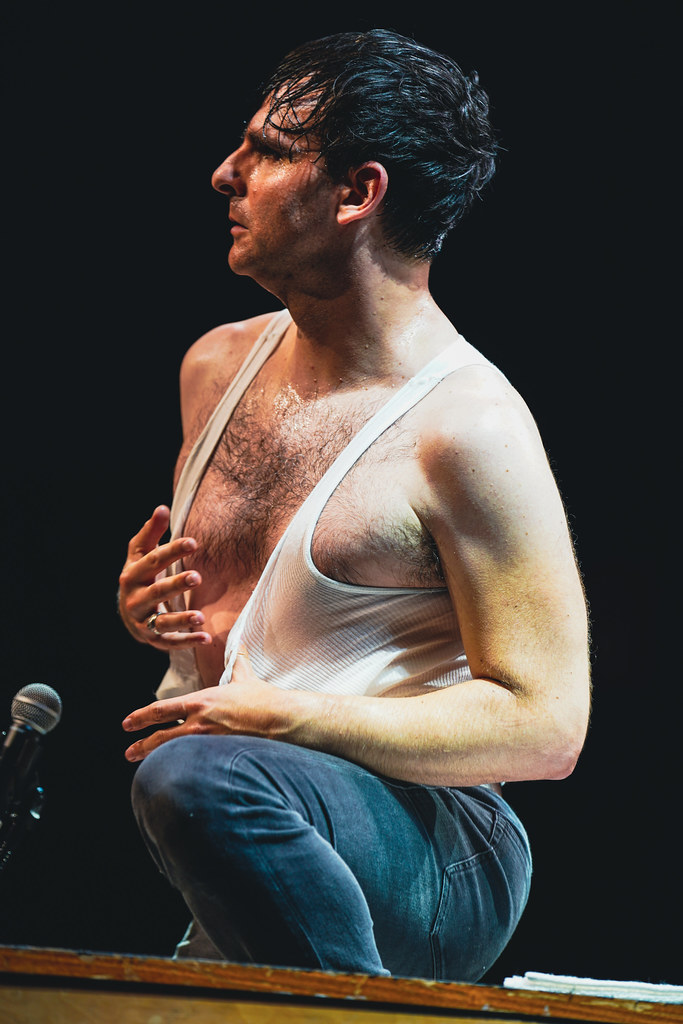 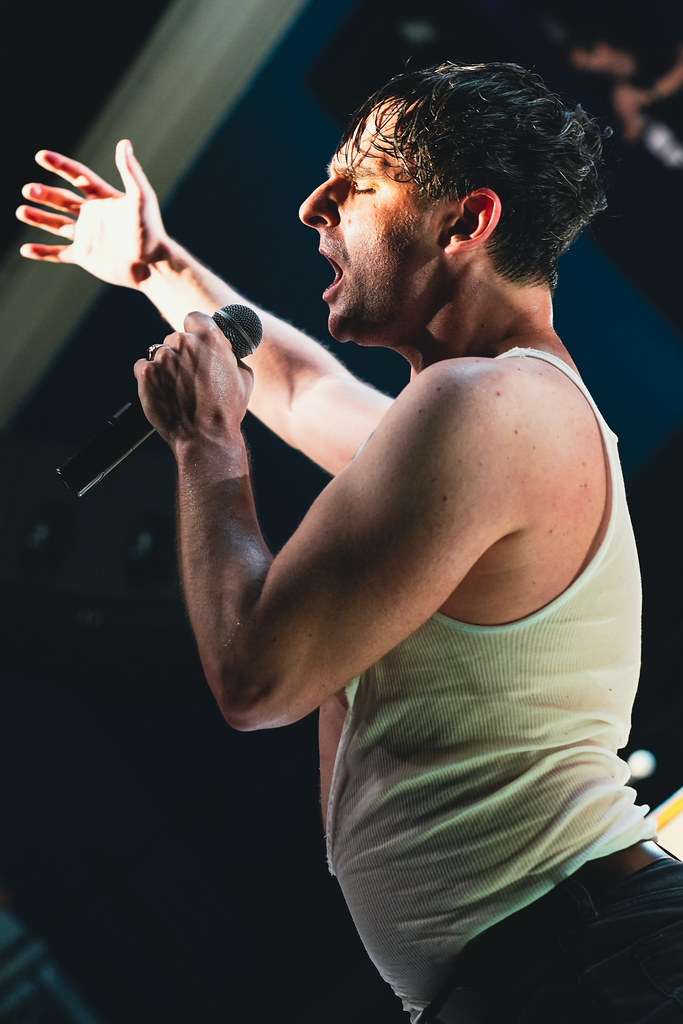 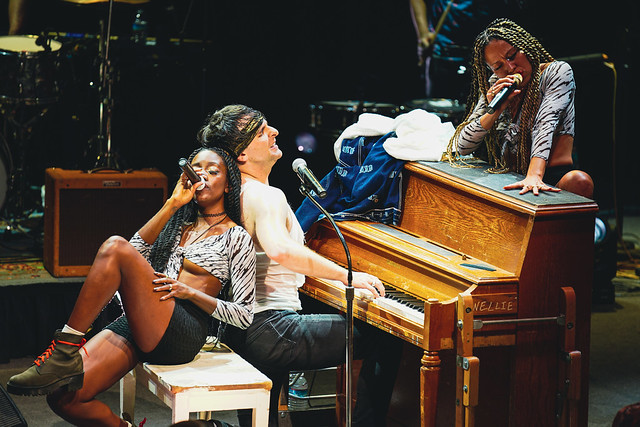 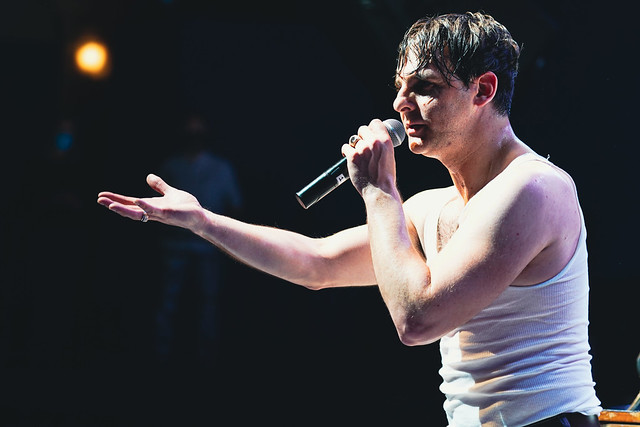 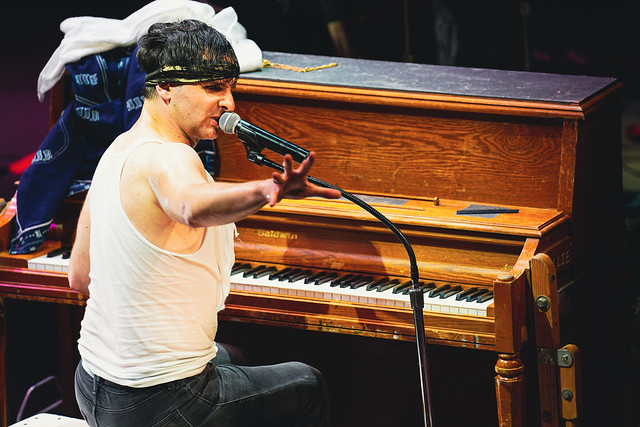 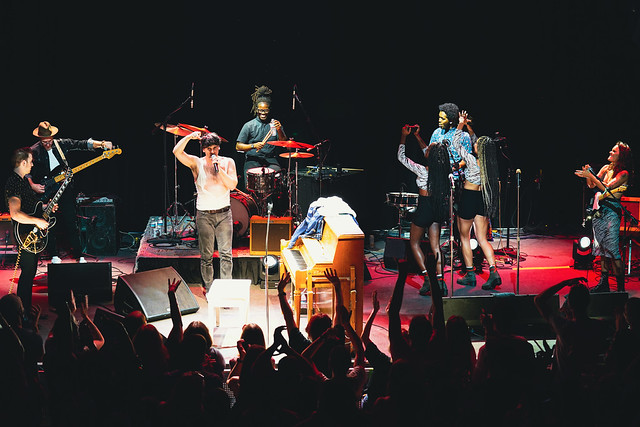