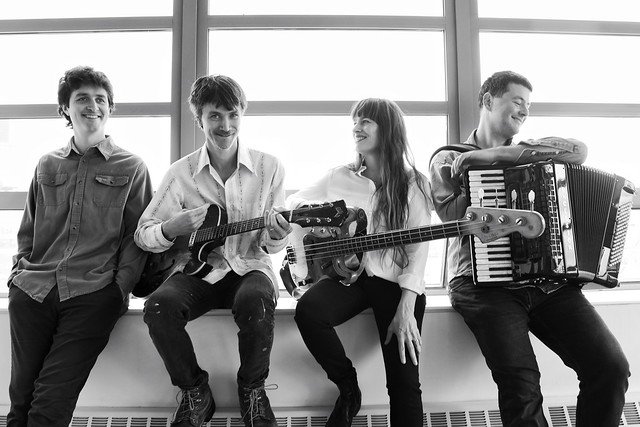 Ian (guitar, lead vocals) and James (accordion, keyboards) were joined by Jesske Hume (bass) and Will Lawrence (drums) for 2019’s Undress, and they remain the current configuration of the band after the departure of Simone. The Felice Brothers released their latest record, the excellent From Dreams to Dust, last month on the indie label Yep Rec. While their sound is earthy, it is hardly rustic or old-fashioned, and their lyrics are thoroughly modern.

Take the song that they opened their set, “Jazz on the Autobahn,” which also kicks off the new record, on Oct. 14. The song combines elements of traditional Americana — sheriffs, classic sports cars — with an apocalyptic scene and imagery that borders on the surreal. The surrealism is turned up to 11 on Silverfish; lines like “Garden ants the size of graduates” drew peels of laughter from the crowd.

By contrast, another cut from the album, “Inferno,” explores how strange and arbitrary the things that we remember are. The song takes its title from the 1999 movie starring Jean-Claude Van Damme, and the song proceeds to name-check the late Kurt Cobain, as well. The movies also show up in “Valium,” which is, in some ways, the archetype of a certain-type of postmodern America. The song explores the soporific effect of how the American West was mythologized in Western movies. Where a classic country would call back to the Old West, The Felice Brothers are interested in a representation of that classic slice of Americana.

The most abstract song on From Dreams to Dust is probably “All The Way Down.” I will confess that I don’t really what understand what “the union / Of an ape in an apron / And a break in the clouds” means, but it’s a compelling line. It’s pure poetry, and it completely works on that level.

Stream from Dreams to Dust by The Felice Brothers on Spotify:

I find “Money Talks” the most harrowing song on the album. The song opens in the middle of a job interview, with the line, “Can you walk me through these gaps in your resume?” This may not be as apocalyptic or eye-popping as some of their other lyrics, but it hits me right where I live. (There’s something to the idea that horror isn’t nearly as frightening as real life. You’re never going to be chased by a monster, whereas a job interview can affect your survival.) “Blow Him Apart” is similarly grounded in real, everyday experience. The protagonist declares, “My rent situation’s officially scary.” The simple admission, “I talk shit / When I’m afraid” gets right to the heart of how we put on masks and layers of defense mechanism.

Ian didn’t say much during their set, but he did express his gratitude for a “beautiful, respectful audience.” DC9 is a tight space, the kind of place where noise or misbehavior would really disrupt the performance and the whole audience; the fans who gathered on Thursday evening were all about the music, and it made for a great experience.

Ian’s other comment concerned his choice of beverage, grapefruit hard seltzer. The singer and the audience shared a chuckle at this, as it’s the sort of drink that’s often seen as silly or frivolous. As you might expect from his lyrical leanings, Ian completely owns a sense of his own ridiculousness.

The bulk of the evening’s material came from their latest record, but the Brothers threw in a good assortment of favorites from their back catalog. “The Kid,” from 2019’s Undress, is an outlaw tale, but it’s an outlaw tale that’s as much about how we care for others as it is about the outlaw’s misdeeds. “Days of the Years,” which they played in their “encore” (they did not leave the stage, but rather announced that they were now playing their encore), is a slice-of-life story that may or may not be autobiographical.

“Jack at the Asylum” and “Plunder,” which came at the front and back ends of their sets, appeared on 2016’s Life In The Dark. As did “Triumph ’73,”  a motorcycle tale that is reminiscent, in some ways, of the road-themed songs of Bruce Springsteen. “Plunder” in particular has the character of a good-time, late-night campfire jam. “Cherry Licorice” is off of 2014’s Favorite Waitress. “Lincoon Contintental,” from 2012’s God Bless You, Amigo, is the rambling sort of tale you might associate with vintage Bob Dylan or the Band, as is  “Wonderful Life,”  from Mix Tape. Ian’s frequent allusions to pop culture can be seen in “Wonderful Life,” which appeared on the band’s self-titled 2008 release.

On Oct. 14, the show opened with singer-songwriter Al Olander, a Baltimore resident. For a few songs, James Felice joined her on accordion, and she got the crowd singing along to a cover of Tom Petty’s “Yer So Bad.” Al showed a lot of charm, and the audience gave her a great reception, remaining quiet and attentive for her set.

In a way, what makes The Felice Brothers music classic is its total embrace of modernism, even post-modernism. The template for this sort of Americana was laid down by Dylan in the ’60s. While classic country might refer directly to these old aspects of American culture, The Felice Brothers instead comment on their absurdity and their dark side. It makes for gripping music, full of visceral, mind-blowing images, and the lyrics often work as pure poetry. It’s not hard to see this once rough and tumble band has developed a devoted following. Their songs are just that good, and they demand your attention.