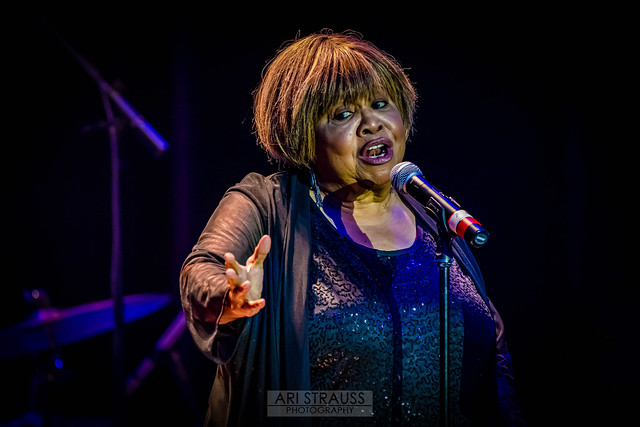 Mavis Staples performs at the Lincoln Theatre in DC on Oct. 19, 2021. (Photos by Ari Strauss)

Amy Helm, perhaps, put it best Tuesday evening at the Lincoln Theatre when she said, “How deeply it moves me to stand on this stage before an American treasure” in Mavis Staples. Mavis headlined the evening, which was a fundraiser for JusticeAid.

JusticeAid is an umbrella progressive fundraising organization that raises money to support various grassroots organizations. The concert was a benefit for the Neighborhood Defender Service. The Neighborhood Defender Service is concerned with police violence, particularly against communities of color. In the evening’s opening remarks, we learned that, so far this year, JusticeAid has been able to give $300,000 to NDS and, following the successful concert, they plan to donate another $100,000 to the cause.

After the opening remarks from JusticeAid, the evening began with a poetry reading by Paine the Poet. Paine explained that he is formerly incarcerated, and that his poem, entitled “I Believe,” is an expression of “everything that keeps me going as an artist.”

Amy Helm, daughter of legendary brand drummer Levon Helm, gave the night’s first musical performance with her band. She began her set with the title track from her 2018 solo album, This Too Shall Light. She followed that with “Rescue Me,” which appeared on her solo debut, Didn’t It Rain.  She also shared the title cut from this album.

Earlier this year, Amy released her third solo album, What the Flood Leaves Behind. The album features more of her own songwriting than previous records, with tracks like “Callling Home” digging into her relationship with her father. Later in the set, she spoke about how, after her father had gotten through treatment for throat cancer, he began to throw house concerts at his home in Woodstock, New York. These concerts grew into the acclaimed Midnight Ramble series; Mavis Staples played one of these fine shows. At this point in his career, Levon was struggling to get his voice back; sometimes it was there, Amy said, and sometimes it wasn’t. To support her father, Amy would sing in unison with him, taking over if his voice cut out on his. One of the songs that Levon would sing was Bruce Springsteen’s “Atlantic City;” the line, “maybe everything that dies some day comes back” is especially poignant in light of this story. 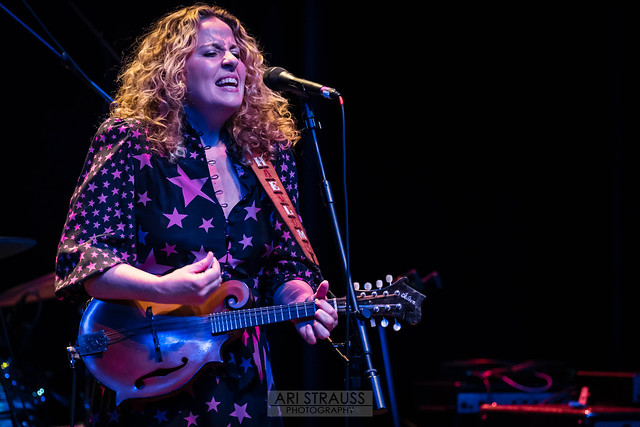 Another deeply personal cut from the album is “The Cotton and the Cane,” which Amy cowrote with Grammy-nominated songwriter Mary Gauthier. As Amy explained, the song is “a part of my story, about growing up with a lot of alcoholism and addiction.” She went on say that, while she’s “seen a lot of people fall to this disease,” she has also seen many, many people overcome it.

A couple more tracks from the new album rounded out Amy’s set. “Breathing” was co-written with JT Nero, one half of the folk duo Birds of Chicago, while “Sweet Mama” was written by Steve Salett. By the conclusion of her set, Amy had completely won over the audience, who gave her a standing ovation.

As Amy and others have said, headliner Mavis Staples is “a national treasure.” She began singing as teenager with her family’s gospel group, The Staple Singers, led by her father, Roebuck “Pops” Staples. As she told the audience after “Change,” she’s “been doing it for over 70 years. The Staple Singers blended their gospel roots with a friendliness to more popular music styles, covering songs like The Band’s “The Weight.” The Staple Singers even appeared at The Band’s famous Last Waltz to perform the song, and Mavis has long had a relationship with the Helm family. The Staple Singers also scored hits with songs like “Respect Yourself,” which came in the middle of the set.

The Staple Singers have an important place in American history, as they were very involved in the Civil Rights Movement. They were close to the late Dr. Martin Luther King. Mavis introduced “Why? (Am I Treated So Bad)” as MLK’s favorite song. “We would sing every night at the meetings before he spoke.” As she has continued her own solo career, Mavis has maintained that commitment to social justice and progressive causes.

Stream “Why? (Am I Treated So Bad)” by The Staples Sisters on YouTube:

There’s something deeply inspiring about seeing musical artists who, into their 80s, are still going strong. Though she joked that she had “brain fog,” it was clear that Mavis is a very sharp cookie. I saw an interview with her at AmericanaFest in 2020, and she was a trove of history and musical and cultural lore. Mavis is vibrant and completely alive in every way, in a way that most people half her age cannot outdo. She has an incredible onstage charisma; despite being the smallest figure onstage, she commands your attention. It’s also clear that Mavis is having fun up there; she would frequently throw asides at her band, especially her guitarist. Even her laugh is powerful and deep; it feels like the laughter of the bones of the Earth, maybe the angels.

The sacred and the secular are combined in Mavis’s performance. Her most overt nod to religion came by way of sharing a childhood memory of her grandmother, who would “moan all day.” “I didn’t know what this moaning was about,” she added, “but I knew it sounded like music.” One day, Mavis asked her grandmother why she was always moaning. “When you moan,” she answered, “the Devil don’t know what you talking about.” Mavis said that she moans, to keep “the Devil out of my business.”

Several of the songs Mavis and her band played towed that close line between the religious and the everyday, like “Touch a Hand, Make a Friend,” and “Brothers and Sisters,” which opened the set. After “Brothers and Sisters,” she addressed the audience, saying “I’ve missed everybody here. We bring you greetings from the Windy City, Chicago, Illinois, the home of the down home blues,” before name-checking Muddy Waters, Buddy Guy, and others. Then came her statement of mission, “to bring you some joy, happiness, inspiration. We want you to feel good.”

Stream “Brothers and Sisters” by Mavis Staples on YouTube:

In the hands of a lesser artist, Mavis’s commitment to a positive, uplifting message could rub off as hokey, but not with her. When’s she singing, you can feel the utter conviction behind it. Her voice is so powerful, she could, to use an expression, “read the phone book,” and it would be moving. In her hands, songs like “Build A Bridge,” “Who Told You That,” “Are You Sure,” and “Ain’t Gonna Let Nobody Turn Me ‘Round,” become anthems for social justice and human rights.

As an interpreter of songs, Mavis is equally adept with popular hits from mainstream songwriters. After a cover of Talking Heads’s “Slippery People,” she praised David Byrne as a “great writer.” The penultimate song of the evening was a cover of Buffalo Springfield’s “For What It’s Worth.” Mavis got the crowd heavily involved and singing along; in the true spirit of gospel music, she always gets the audience involved in call-and-response. The evening closed with the Staple Singers’ biggest hit, “I’ll Take You There,” which she closes all her sets with. It’s a tour-de-force, showing off her voice, her unbelievable charisma, and her ability to work a crowd and get them to participate.

Even if you’re not religious — and I’m not — Mavis’s music loses none of its force. Her brand of spiritual music is deeply tied into human concerns: justice, kindness, love. For this evening’s concert, she was a perfect choice, an iconic figure in music who shines as as a beacon of hope and light. If you have the opportunity to see Mavis — and she’ll be appearing for three nights at Wolf Trap’s Barns later this seaon — do not let it pass. This was one of the most powerful, deeply moving musical experiences of my life, and I guarantee you’ll feel the same way.

Here are some photos of Mavis Staples performing at the Lincoln Theatre on Oct. 19, 2021. All photos copyright and courtesy of Ari Strauss. 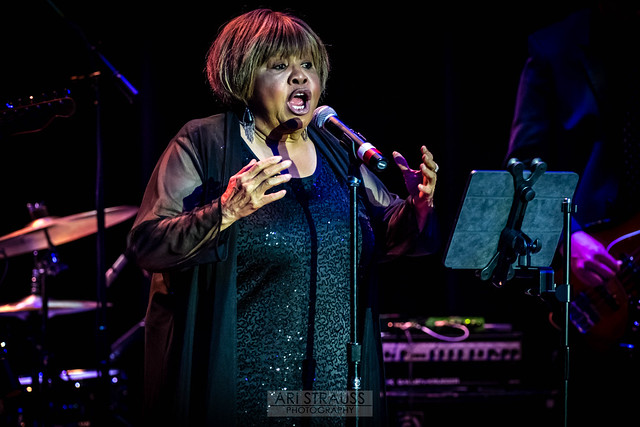 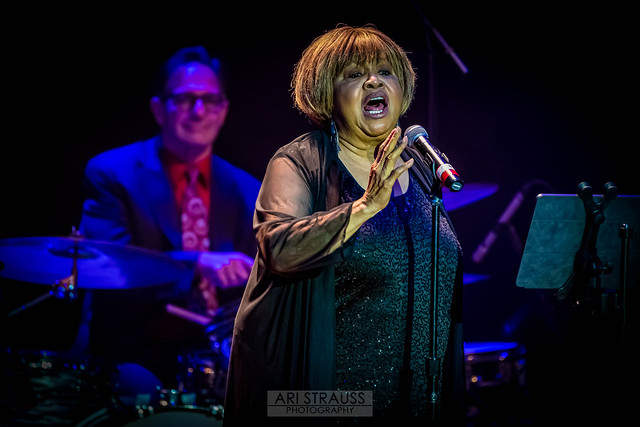 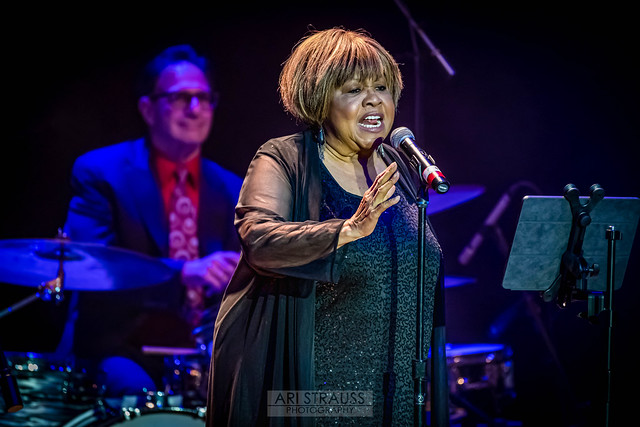 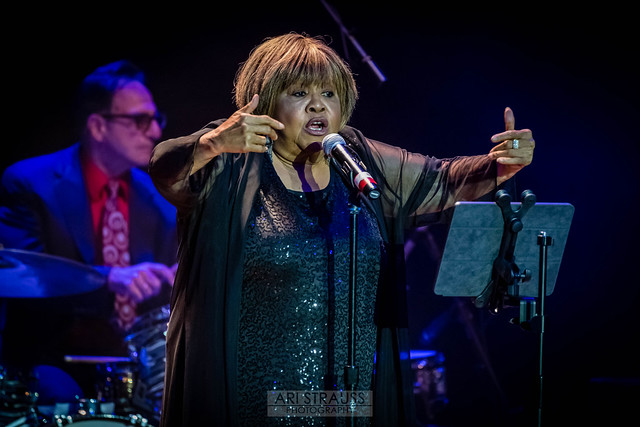 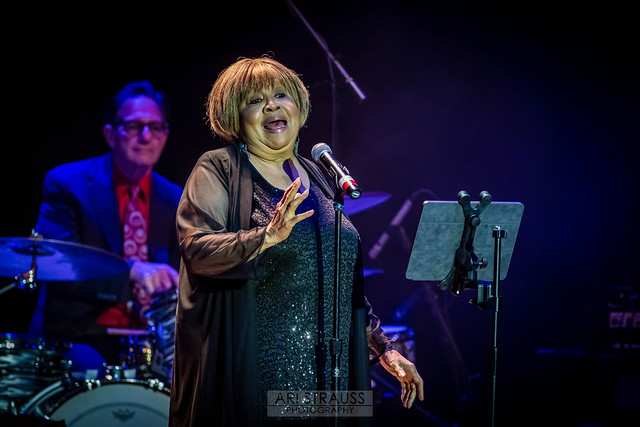 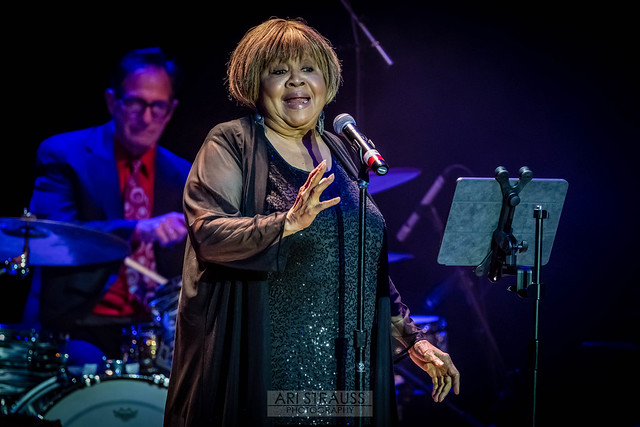 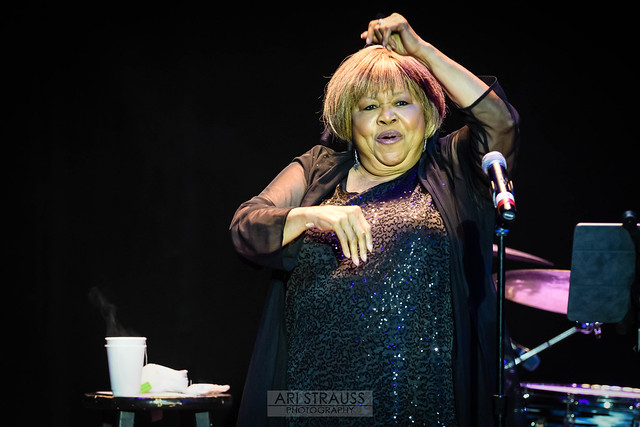 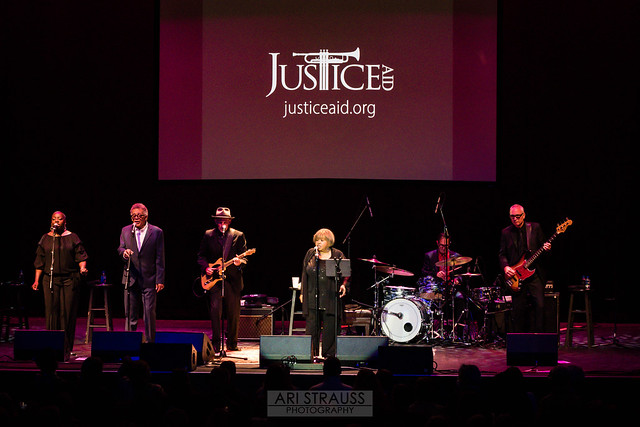 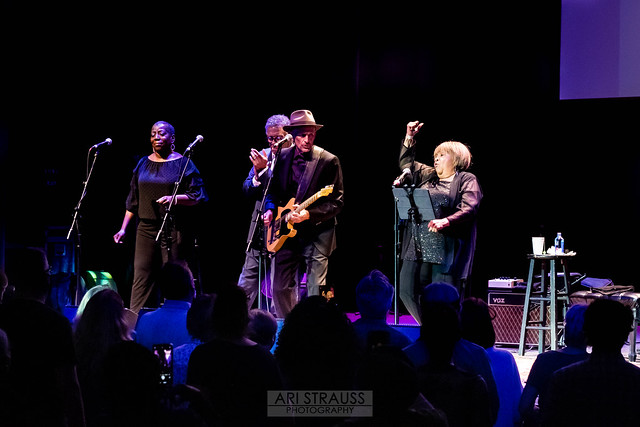