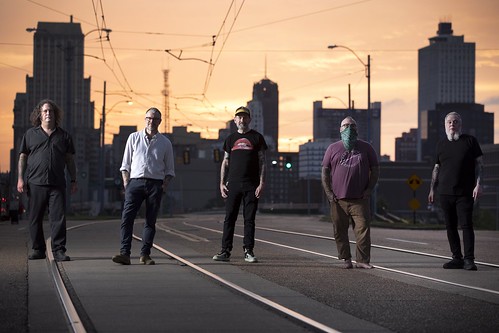 The genre of alt-country was well represented at the 9:30 recently when Memphis, Tennessee’s Lucero performed with newcomer Morgan Wade and her band opening. It was an evening full of loud, twanging guitars and southern accents, with raucous songs about love, life, family, and drinking.

Earlier this year, Morgan Wade released her debut album, Reckless. The record was produced by Sadler Vaden, the guitarist in Jason Isbell’s band, the 400 Unit. While some sources, like AllMusic, have classified her music as “contemporary country” or “country-pop,” she has, to my ear, much more of a country-rock or alt-country sound. There’s a rock’n’roll edge, at least, to what she’s doing; it’s loud, dirty, and raw in the best way. If you want a taste for what inspires her, look no further than medley she performed of Elvis’s “Suspicious Minds” and AC/DC’s “You Shook Me All Night Long.”

Just looking at Wade’s song titles, you can see that, while she’s country, it’s hard country, the kind that’s always been closer to the roots of rock’n’roll: “Reckless,” “Last Cigarette,” and “Wilder Days,” which closed her set, all convey a sense of her ouevre. Morgan and her band also performed “Don’t Cry,” “Take Me Away,” “The Night,” “Other Side,” and “Me and You,” which featured some sweet pedal steel.  Morgan’s star is definitely on the rise. Ben Nichols, the lead singer of Lucero, said, “We’ve toured with some badass bands. Morgan Wade is the most badass. I hope she remembers us and lets us open for her in a year.”

Watch the official music video for “Wilder Days” by Morgan Wade on YouTube:

Founded in 1998, Lucero is a Memphis institution; in 2018, the city’s mayor declared April 14 “Lucero Day.” Like their hometown, they’re a little bit country, and a whole lot of rock ‘n’ roll. They’re real, gritty, honest and loud, and they make great music. They’re a hard-working band, too,  between 2000 and 2006, they released albums annually, and they toured relentlessly. They’re one of the second generation of alt-country bands that emerged in the latter part of the 90s, along with the Drive-By Truckers.

Ben Nichols, the lead singer and lyricist of Lucero, comes from a family of artist. His brother is screenwriter and director Jeff Nichols, whose diverse films include the coming-of-age drama Mud, Loving, about the real-life couple whose case resulted in the striking down of laws against interracial marriage, and Midnight Special, a science-fiction story. Both Nichols brothers have an excellent sense of story and narrative; many of Ben’s songs play out like three-minute movies, and he’s contributed music to his brother’s movies.

Over a career that’s lasted more than two decades, Lucero has released 11 full-length albums. Their first, The Attic Tapes, was self-released, while their latest, this year’s When You Found Me, was released on indie juggernaut Thirty Tigers. The band played several cuts from this album, which sees the band easing into middle age and embracing fatherhood.  “Have You Lost Your Way,” Ben said, was inspired by his daughter, Izzy. It was meant to a fairy tale, he explained, but it turned out horrifying, much like the picture Izzy drew of her grandfather being sliced in half by a chainsaw. “Hold Me Close,” he shared, was inspired by a phrase she muttered. “Coffin Nails,” he told the audience, is a ghost story, and it shares a narrative voice with an earlier song, “The War,” which also found its way into the set. (Introducing “The War,” Ben mentioned that his grandfather fought in WWII and his great-grandfather fought in WWI.) The set also included “Good as Gone,” after which Ben commented, “II had to close my eyes during that whole song,” “Everything Has Changed,”  (a song about “drinking with the devil”) and “Back in Ohio” (shoutout to my home state!).

In a nod to their hometown, Lucero took to the stage played on by the Johnny Rivers song, “Memphis” at 9:30 Club on Oct. 20. Memphis and the state of Tennessee are almost themselves members of the band. In their set, Lucero included “Texas and Tennessee,” a tribute to the two states. The record that included “Slow Dancing,” Ben told the audience, could’ve been called The Shelby County Album; instead, they gave their third album, released in 2002, the name of their home state.

Stream “When You Found Me” by Lucero on YouTube:

Before they dug into their newest material, Lucero got the crowd going with a couple of older songs. Te set began with a couple off cuts off of their well-received 2018 album, From the Ghosts: “For The Lonely Ones,” followed by “To My Dearest Wife.” The set also included “Cover Me” and the title track. The band continued their set with a short instrumental into, “Downtown,” and Ben joked, as he attended to his guitar, “Let’s not make any promises we can’t keep.” “On My Way Downtown” was the first of their drinking songs of the evening, and there’s plenty of liquor in their lyrics. Later in the set, Ben noted that “it’s been a pretty sober show.  It’s a good thing I had two drinks before I came on.”

“Here at the Starlite” is a tale of one of the many rooms and halls the band has played in its two-decade plus career. “Thanks for sticking with us on that one,” Ben said after they finished playing. The band left the stage except for Ben and keyboardist John Stubblefield (he of the mighty mutton chops) for a couple of songs that featured acoustic guitar and accordion: “The War” and “Loving,” which Ben referred to as “another family song.”

Perhaps the most aptly titled song of the set was “Raising Hell,” which gets to the very heart of what Lucero’s all about. As Ben declared, “nobody ever called us professional. “All Sewn Up,” he told the audience, was one they hadn’t played yet on this tour, while “Smoke” was a cut off 1372 Overton Park, the band’s 2009 release. The crowd got absolutely lit when they heard the beginning nights of “Nights Like These.”

Other tracks in the set included “Goodbye Again,” “Sweet Little Thing,” “Chain Link Fence,” “What Are You Willing to Lose,” and “Tears Don’t Matter Much,” which closed out the main set. For their encore, they played the title track off When You Found Me, “No Roses No More,” and “Drink ‘Till We’re Gone.”

If Morgan Wade leans more to the country side of the country-rock equation, Lucero is decidedly more on the rock side. They’re proudly a Southern band, and while they have their country influences, there’s as much punk in their mix. While there are a lot of bands that are twangy, and a lot of bands that get loud, the storytelling is really what sets them apart: at his best as a songwriter, Nichols is capable of Springsteen-like storytelling.

In the end, the band’s ability to place compelling stories against sweeping sonic backdrops is what really defines them, more than any particular genre or style. As rough and raw as their sound can be, as grounded and everyday as the stories they tell are, Lucero, beneath the bluster, is a band with a tender heart and a common touch.