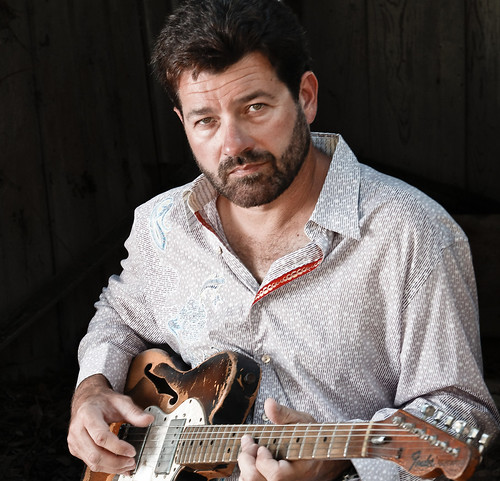 “I consider myself a live artist, not a recording artist,” the Louisiana blues guitarist told the audience at The Birchmere last week. A native of Baton Rouge currently residing outside of New Orleans, Benoit’s playing has earned well-deserved comparisons to iconic virtuosos like Albert King and Albert Collins. A member of his home state’s Cajun community, Benoit is one the foremost exponents of the style known as “swamp blues.”

To understand what I mean by “swamp blues,” I want to take a step back for a moment and talk about the blues more generally. If you’re not particularly familiar with this kind of music, you may have the misconception that the blues is monolithic, which couldn’t be further from the truth. The genre’s history stretches further back than we have recorded music, to a time when the only music people would hear is the music that they heard played live. The music that people heard live was determined by where they lived; music was distinctly regional in that era.

With its roots in regional musical styles, the blues is a broad genre, of family of related but distinct kinds of music. On Allmusic.com, Swamp Blues is classified as a type of Electric Blues, a “looser, more rhythmic variation of the standard Louisiana sound” that “brings more contemporary elements of New Orleans, zydeco, soul music, and Cajun to bear on its style.” Tab Benoit definitely brings the Cajun element from his own heritage, along with the influences of fellow Land of Dreams artists like Sonny Landreth, Professor Longhair, and Dr. John, to name just a few.

As a guitarist, Benoit’s skill is breathtaking. He plays with a rare combination of technical mastery, emotional expression, and looseness. During his set at The Birchmere on Oct. 21, he told the audience that this wasn’t “a show,” but rather “just playing.” A show, as he put it, is rehearsed; what he’s doing is just playing with his rhythm section. He compared his approach to music to his childhood idol, Evil Knievel: “I ain’t testing this. I’m just setting up the ramp and hitting drive.” It’s a testament to just how good he really is that he can play with this level of spontaneity.

Stream Legacy: The Best of Tab Benoit on Spotify:

For Benoit, live performance is the essence of the music. He didn’t do streaming concerts during the pandemic, he said, because he needs the interaction with a live crowd. And boy, can he ever work a live crowd. Tab took requests, spicing his responses to them with amusing wisecracks like, “Here’s a song a couple of folks in the first row thought the people in the back row should here.” He’s a genuinely funny guy, and he got more than a few laughs from the audience on Thursday. His most amusing story recounted how he had to have the dashboard of his car taken apart when, after mistaking it for a CD player slot, he jammed a CD into a crack and got it stuck there.

Benoit’s set featured extended versions of originals and covers. Rather than playing a large number of songs, he kept his set relatively confined, but really let himself spread out on what he played. While he does write some great songs – as evidenced by “Why Are People Like This,” “Little Girl Blues,” “Standing on the Bank,” “Too Many Dirty Dishes,” “Solid Simple Things,” “Shelter Me,” and “Medicine” – it’s in the guitar work where he shines brightest. This makes him an excellent interpreter of songs, which he showed with covers of “For What It’s Worth,” “Night Train,” “These Loving Arms,” and “I Put A Spell On You.”

With a tight rhythm section backing him up, Tab blazed away on his guitars for nearly two hours, giving an absolutely bravura performance. For anyone who appreciates outstanding electric guitar work and has an interest in the American musical heritage, he’s a must-see performer.