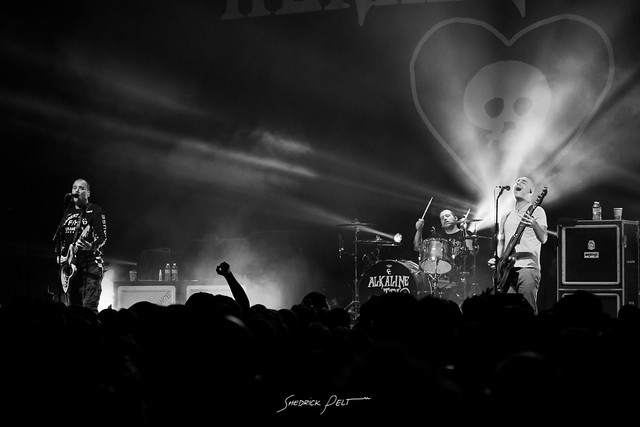 On Saturday, a weekend of ghoulish guests and things that go bump in the night, rock music took center stage at The Fillmore in Silver Spring during a jointly-headlined tour stop with Bad Religion and Alkaline Trio, two forefathers of the punk rock revival of the early-to-mid 90s.

If there’s one band to follow from here to infirmary, it’s Chicago’s own Alkaline Trio. The band caught my imagination way back in 1998 and quickly became one of my favorites of all-time — so much so that a year later I got their iconic devil-tailed heart and skull tattooed on my inner elbow. Their dark lyrics involving death, depression, love, and rock n’ roll allowed me to explore conversational places that my hip-hop heroes were unable to take me.

Founded by lead singer Matt Skiba in 1996, the three-piece ensemble featured a different line-up until 1998 when bassist Dan Andriano joined and drummer Derek Grant in 2005, both of whom inevitably became immovable fixtures in the band.

On Oct. 30, the show started with the perfect soundtrack to a gorgeous, dark, rainy Halloween eve. “Private Eye,” off their third studio album From Here to Infirmary, fit right in with the night’s expectations with lyrics like, “I dragged this lake looking for corpses / dusted for prints, pried up the floorboards,” and the crowd singing right along with them. One of my favorite things about the Trio’s music is actually their propensity for singalongs.

As Alkaline Trio ran through their discography, you saw and felt their love and admiration for each other. Matt smiled and made faces at Dan, who thanked Derek for sonically being the backbone during their set. About halfway through the set, they took it back to where it all began with “Cringe” and “Clavicle” off their first full-length album Goddamnit, which explores the darker side of heartbreak. “Cringe” showcased Matt’s angelic voice as the thing nightmares are made of. “Clavicle,” a haunting love story, was my intro to the band way back when and ultimately the start of my love affair with the genre.

The climax of a nostalgically wicked night came in the form of “Radio,” off their quintessential sophomore album Maybe I’ll Catch Fire. It encapsulates the spirit of their music and even captures the desperation of the current times with enigmatic lines like, “making the most of bad time / I’m smoking the brains from my head / leaving the coal calling the kettle black and orange and red / this kettle is seeing red”.

Bad Religion, formed in Los Angeles in 1980, has consisted of a revolving group of musicians over the last 40 years, led by frontman Greg Graffin. They gained much notoriety with their hardcore punk style and anti-establishment records, and a large underground following for their first commercial success with Atlantic Records, Stranger than Fiction (1994), led them to certified gold in both the US and Canada. After leaving Atlantic in 2001, they found their way home to Epitath Records where they rekindled some of their early success with Los Angeles is Burning (2004), The Devil in Stitches (2010), and their most recent release Age of Unreason (2019).

Opening their set with the vigor and polish you’d expect from a 4+ decade touring band, the guitar riff from “New Dark Ages” was the igniter for an already primed sold-out crowd. The fast-paced, energetic record features heady lyrics by co-founder Brett Gurewitz, delivered perfectly by Greg Graffin. After rattling off record after record from their decades-old discography, without a breath, the band took a moment to soak up the adoring cheers from dedicated fans before heading into their title track “No Control,” off their fourth studio from 1989. It’s an album that pays more homage to their classic hardcore punk roots and is often considered a landmark release in the genre. The band capped off their night with the message-laden “We’re Only Gonna Die,” which embodies how their social and emotional presence speaks to even today’s society.

A night with these punk pioneers surely soothed our bleeding hearts. ❤️💀

Below are images from a deliciously dark night with Alkaline Trio & Bad Religion at The Fillmore Silver Spring in Washington DC on Oct. 30, 2021. All images and words copyright and courtesy of Shedrick Pelt (www.sdotpdotmedia.com)!