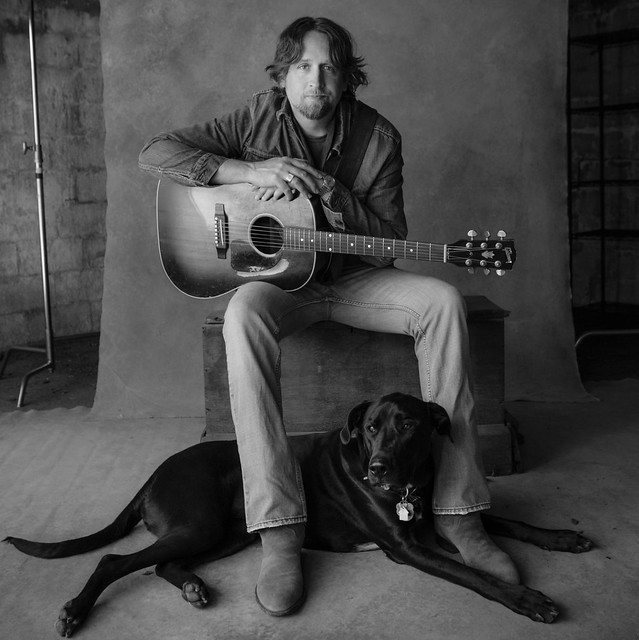 Over the course of more than 20 years, singer-songwriter Hayes Carll has gradually built his career to the point that he has become of the central figures in the Americana genre. After releasing his first album, Flowers & Liquor, in 2002, he was voted “Best New Act” by the Houston Press. His second album, 2004’s Little Rock, became the first self-released album to reach number 1 on the Americana chart. In 2010, he won the Americana Music Association’s Emerging Artist of the Year. The next two years, he was nominated for Artist of the Year. He’s currently touring behind his eighth album, You Get It All, and he headlined at The Birchmere on Saturday evening.

A Houston native, Hayes first began playing music for audiences while he was a student at Hendrix College in Arkansas. After college, he moved back to his native Texas, where, as he told the audience, he lived in a small coastal village called Crystal Beach, where he played open mics and tended bar at the Old Quarter, where he started this current tour. In those early years, he had some odd gigs. One that didn’t quite pan out involved a body painter who called himself “Rembrandt.” “Rembrandt,” who was a seedy character, recruited the young and relatively safe-looking Carll to do handprints on women’s breasts.

As Hayes recalled, he couldn’t believe he was going to get paid for this. Unfortunately, before the gig could ever materialize, Rembrandt was arrested, and he never saw him again. In another early gig, he worked as a test medical patient, helping medical students improve their bedside manner. His first script cast him as a schizophrenic with gonorrhea. He also worked for the Census Bureau, which he said was “incredible, but it only came every 10 years.” (Though he did not specify the work he performed, the logical inference is that he was a census taker.)

On Oct. 30, Hayes shared another tale of his adventures on the road after “Beaumont.” At a show he was playing in Kuntz, Texas, he won a gun in a raffle. He also mentioned how a condiment manufacturer had named its BBQ sauce “Highway 87” (after Hayes’s song of the same name, which he played later in his set). They also parodied the line “all the way from Beaumont, with a white rose in my hand,” with “all the way from Beaumont, with a rib in my hand.” That’s Texas for you!

Over the course of the evening, Hayes recounted some of the many shows he’s played at The Birchmere over the years. After playing “None’ya,” a song about his relationship with his wife, fellow singer-songwriter (and acclaimed memoirist) Alison Moorer, he talked about his last show there, which was on March 1, 2020, just days before the pandemic shut everything down. Alison opened that show; during Hayes’s set, someone coughed — rather loudly, he said — and he cracked a joke about it. When he got backstage, Alison made a comment to the effect that maybe he shouldn’t joke about it.

Stream You Get It All by Hayes Carll on Spotify:

The first time Hayes appeared at The Birchmere, he opened for country legend Marty Stuart. He played a parody version of Johnny Cash’s “Everywhere Man,” which simply repeats “Houston” instead of listing different places, and then proceeds to go into extensive detail about all the drugs he’s taken. Now, Marty Stuart, it bears pointing out, is very tied to the history of country music (he has one of the world’s foremost collections of memorabilia), and he played in Johnny Cash’s band; Hayes forgot these facts about Marty, who responded to the parody by telling him, “You ain’t right.”

Hayes’s new album, You Get It All, was co-produced by Alison, who also helped write and provided vocals for several of the songs. All of the songs were co-writes; “In The Mean Time” was also a duet with Brandy Clark (who appears at The Birchmere later this month). In his banter after the song, he told the audience, “Naps are important, and nobody talks about them in music.” Hayes has had considerable success working with other writers; one of his most popular songs, “Drunken Poet’s Dream,” was a collaboration with beloved Outlaw Ray Wylie Hubbard. It was nominated for Best Song at the 2010 Americana Music Awards.

The show opened with several songs from the new album: “She’ll Come Back to Me,” “If I May Be So Bold,” and the title cut. Later in the set, he introduced “Nice Things” by telling the audience about the puppy he adopted during the pandemic, He had been told that it was a lab, but it just kept growing and growing. He got one of those dog DNA tests, and discovered that his dog’s mother was a Great Dane, and its father was “an even larger Great Dane.” She is, he said, “a big girl; we have a lot of body positivity talks.” As many puppies are wont to do, it ate everything in sight, including his wife’s prized flowers, which inspired “Nice Things.”

While the songs on You Get It All were co-written, they are no less personal for it. Hayes introduced “Help Me Remember” as “a song about having a witness to your life.” The song was inspired by the time when, when he was 14, he was riding in his grandfather’s pickup truck and his grandfather experienced a sudden and disturbing bout of dementia. Having seen this process begin in my own mother this song hit especially hard.

Other songs included “Wild as a Turkey,” “Different Boats,” “Any Other Way,” and “Hard Out Here,” which concluded the main set. “Jesus and Elvis,” from his 2019 album, What It Is, tells the story of a bar in Hayes’s former home city of Austin, and the tragic losses experienced by its owner. “K-Mag YOYO,” a military saying short for “Kiss my ass, guys, you’re on your own,” is a tale of war, trauma, and psychedelic drug use; it earned him his second Song of the Year nomination from the Americana Music Awards.

After “Hard Out Here,” the band left the stage, and Hayes began his encore solo, playing “If It Was Up To Me.” When he finished, his guitarist, Travis Linville (who makes great music in his own right) came back to the stage and accompanied him on “Knocking Over Whiskey.” (In a bit that briefly had me fooled, Hayes joked that, prior to the pandemic, Travis had never picked up the guitar.) The rest of the band then returned for the evening’s last song, “Chances Are,” which was covered by Lee Ann Womack and earned him a Grammy nomination for Best Country Song.

Hayes Carll is one of the finest songwriters working today, blessed with a quick, sarcastic sense of humor. As he showed on Saturday evening, he is as fine an heir to the tradition of Texas troubadours as anyone.