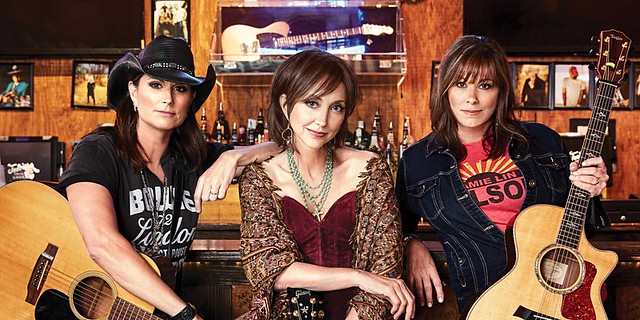 Packaged as “Chicks With Hits,” country singer-songwriters Suzy Bogguss, Terri Clark, and Pam Tillis took the stage together at The Birchmere on Wednesday evening.

Throughout the evening, the women sang harmony for each other. There was a relaxed, laidback atmosphere of close friends sharing great songs. The Birchmere was packed, but the evening had an intimate feel. With just acoustic accompaniment, all three ladies really showed off their chops as superb vocalists. The evening was a great reminder of how, in many ways, the ’90s, for all that was wrong with them, were a real high-water mark for women in country music (and in the music business more broadly).

Each following a different path, the women first emerged as stars in the country scene in the ’90s.

Tillis, the daughter of legendary country musician Mel Tillis, dropped out of the University of Tennessee, where she played in a jug band and a folk duo, to work at her father’s publishing company. She released her debut single in 1981, and her first album followed in 1983 on the Warner Brothers label. She had some minor chart success, but left the label to become a staff writer for Tree Publishing in Nashville. At the end of the decade, she signed with Arista, and her first single, “Don’t Tell Me What To Do,” peaked at No. 5 on the country charts.

Like Tillis, the statuesque Clark also comes from a musical family. Her grandparents were active in the Canadian country scene, opening for artists like George Jones and Johnny Cash, and her mother was active on the folk circuit. Clark, who is of French-Canadian heritage, was born in Montreal, Quebec, and raised in Medicine Hat, Alberta. After graduating from high school, she moved to Nashville, where she played in bars and honky-tonks, and eventually signed to Polygram/Mercury records in 1994. Her first single, “Better Things To Do,” came out the following year and reached the top five in both the United States and her native Canada. Over the course of her career, she has won several Juno Awards, which honor the achievements of Canadian musicians.

Watch the official music video for “Better Things to Do” by Terri Clark on YouTube:

A native of small-town Aledo, Illinois, Suzy Bogguss sang in a church choir from the age 5. She learned to play piano and drums as a child, later taking up the guitar in her pre-teen years, and she performed in musicals in high school. While studying at Illinois State University, she played guitar and drums in local coffeehouses. After college, she toured nationally as a folk troubadour in the mold of artists like Bonnie Raitt, James Taylor, and Emmylou Harris. After moving to Nashville in 1985, she scored a regular gig playing at what would eventually become Dollywood. Though she had earlier recorded an LP on a small label, Bogguss’s recording career took off with her first three singles for Capitol. Her album, Somewhere Between, followed in 1989, and included the top-20 single “Cross My Broken Heart.” The next year, she won the Academy of Country Music’s award for Best New Female Vocalist.

While all three women have had considerable success as mainstream country artists, each has their own distinctive approach. Bogguss, as mentioned above, is heavily influenced by folk music and singer-songwriters. Clark’s personal style leans toward classic honky-tonk, complete with boatloads of attitudes, while Tillis hews closest to a traditional country mold.

On Nov. 3, the three artists shared the stage for a 90-minute set, playing in the round. When they took the stage, Clark, remarking on their headgear, said, “We all decided to be hat acts tonight.” (Hat act is a term, sometimes used pejoratively, to describe artists who came on the scene in the ’90s and distinctively wore cowboy hats.) Suzy then kicked things off with “Outbound Plane,” which was co-written by Tom Russell and the late Nancy Griffith. Bogguss released it as the second single from 1991’s Aces, and it reached No. 9.

Watch the official music video for “Outband Plane” by Suzy Bogguss on YouTube:

Clark was up next. The Birchmere, she told the audience, is “one of my favorite venues.” She recalled that her first show there was playing a solo, and it’s “more fun with my friends.” Her song, “I Just Wanna Be Mad,” she said, was “for any of you who have ever been in a relationship and been pissed off.” Written by Kelley Lovelace and Thomas Miller, it was released in 2002 as the first single from her album Pain to Kill. It became her first top-ten country single since 1998, reaching number, and also crossed over to break into the top 30 of the Hot 100.

Tillis started off by saying, “What a thrill it is to be back together,” after the long hiatus from live music. She mentioned that she was just a week out of a splint for a broken hand and introduced Haley Sullivan, who accompanied her on guitar. Written by Chapin Hartford, “Shake the Sugar Tree” was her fourth top-10 country single, rising to No. 3.

Between songs, there was a spirited exchange that led to Suzy saying to Terri, “I can’t imagine you waiting tables.” Terri replied that much of her paycheck went to to pay for broken items, adding, “It wasn’t pretty.” After Suzy played the title cut from Aces, Pam noted “I like singing harmony as much as lead.”

Terri led into her next song. “Girls Lie Too,” by asking, “How many women here have ever told a lie?” She paused for a moment, the continued, “I see 15 hands and 20 more admitting the truth.” Pam followed with “Let That Pony Run,” written by the fantastic Gretchen Peters, which came out while she was touring with George Strait.

The inimitable Tanya Tucker came up in Suzy’s introduction to “Someday Soon,” which was penned  by the stellar Canadian folk/country musician Ian Tyson (who performed in the duo Ian & Sylvia and the country-rock band Great Speckled Bird). Tanya told her, “I wish I’d done that song, and you have a wart on your butt.” Suzy recalled that she’d had to fight her label to do the song, as they believed that it had already been covered too much.

Terri wrote “If I Were You” when she was 21. The song is about her first marriage, to a man named Teddy Joe, who she described as “not a big talker, didn’t like to discuss his feelings.” Her banter took up the subject of interesting names, and she mentioned that she had, at one point, paired up with a fellow named “Skip Towns.” She also recalled how labels had unofficial quotas on the number of female musicians on their roster. She also did a brilliant imitation of John Anderson doing his signature song, “Swingin’.”

Pam mentioned that she was the oldest of Mel Tillis’s six kids, and explained that “Spilled Perfume” is “big sister advice: if you make a mistake, don’t be so hard on yourself.” Suzy’s next song was “Drive South.” Introducing “Now That I Found You,” Terri asked the audience, “How many people in here are in love tonight? Hold the person next to you,” she said, quickly adding, “if you know them.” She noted that, when the label originally brought her this song, she didn’t want to record it because she thought it was “too pop.” Fortunately, she agreed to do it, and went to No 1.

Watch the official music video for “Spilled Perfume” by Pam Tillis on YouTube:

Pam introduced “Maybe It Was Memphis” with a joke:  a farmer is going out to his machine shed, and as he’s walking to it, he’s stripping naked. His neighbor sees him and asks what he’s doing. The farmer answers that he’s been in couples counseling, and therapist said he should he “do something sexy to a tractor.” Heyo!

For her last song of the main set, Suzy played “Letting Go.” Pam went with “Mi Voda Loca.” Terri wrapped the main set with “Better Things To Do,” telling the audience. “If you don’t know the words, have another drink and make ’em up.”

A standing ovation brought them back to the stage. Pam started the encore with “Cleopatra, Queen of Denial,” which Terri followed with “You’re Easy on the Eyes.” Pam had a go with “Don’t Tell Me What To Do,” then Suzy with “Hey Cinderella.” The evening closed with the audience singing along to Warren Zevon’s “Poor, Poor Pitiful Me,” which Terri recorded a cover of.