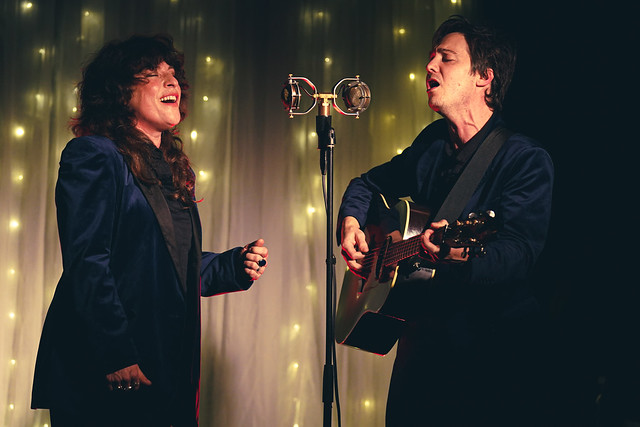 Cary Ann Hearst and Michael Trent perform as Shovels & Rope at Rams Head On Stage in Annapolis on Nov. 3, 2021. (Photo by Casey Vock)

So much of the best music has been the result of human relationships gone wrong, gone right or our infinite quest to understand our own needs and desires.

Still, it’s rare to actually behold a successfully intimate relationship through music, one put on display for the sake of the songs and emotions that it can yield.

But at a recent stop in Annapolis at Rams Head on Stage, Shovels & Rope showed that it is indeed that kind of outfit, the result of a man — Michael Trent — and a woman — Cary Ann Hearst — who met almost 20 years ago and ignited a flame for one another and for making music together.

Touring across the country on what’s been called the duo’s Bare Bones Tour, it’s one intended to celebrate Shovels & Rope’s foundational songs in a stripped-down fashion, offering raw slices from their heated, booze-soaked catalogue which showcases some of the most unhinged, authentic harmonies in Americana, and has produced some of the most heart-wrenchingly honest songs of our time.

These voices need little instrumentation to support them, as any fan of the duo already knows, but Trent and Hurst are both seasoned veterans, each able to handle a variety of tools on stage. And in Naptown the night of Nov. 3, Shovels & Rope delivered a stirring, sultry set of country-roots music to a packed, enthusiastic venue.

Listen to Shovels & Rope’s 2021 single “Domino” from the forthcoming album Manticore on YouTube:

Already each established musicians by the time they met in 2002, Trent and Hurst began hitting the road together in 2004 but performed under their own names or with separate bands. But they began taking the stage together, and behind the scenes they built their relationship through performing songs and dreaming of better days ahead.

Respectively releasing their own solo albums in 2006 and 2007, Hearst and Trent put out a collaboration album in 2008 known as Shovels & Rope, the name pulled the breed of murder ballads they’d found comfort in singing through their careers. At the time intended to be just a one-off, it was clearly the beginning of something special — they married the following spring.

And the passion of their relationship spilled over into their music in the form of vivid expression and tangible emotion that comes through in any song they recorded or played in front of an audience, and they realized they needed to seize the opportunity they’d forged.

And so they did. Four years later they released their second album as Shovels & Rope, O’ Be Joyful, a recording that would win them the Americana Music Association’s Emerging Artist of the Year Award in 2013.

Michael and Carry Ann started last Wednesday at Rams Head across from one another, positioned at a condenser microphone and giving onlookers a clean angle to glimpse the magnetic bond between them. Their eyes locked onto one another, you’d have been hard pressed to know if they were turned on, angry, or somewhere in between.

Michael holding an acoustic guitar and Cary Ann using only a harmonica, the first three tracks saw them perform mostly face to face, turning to look at the crowd to deliver chorus lines, such charming, nonchalance that might require choreography of a less tight unit.

“We’ve been doing a lot of parenting,” Michael said, referring to the couple’s two children, and he was met with robust laughs that seemed to come from a higher rung of experience, with plenty of seniors in the room.

“It’s intense,” Trent continued before he and his wife went into “Bleed Me,” which celebrates the challenges and rewards of bringing life into this world.

While Carry Ann’s voice might stand out just a tad more to most who listen to Shovels & Rope, Michael’s delivery and piano skills shined early in the evening at Rams Head through a cathartic, rejuvenating take on “Carry Me Home.” Introducing this song, he mentioned he’d been lately thinking about his father, and his voice shivered as he cried out the chorus:

More focused on his guitar and his electric piano and organ, Michael is an energized performer, intensely focused on the music and his articulation, his neck veins protruding when he lets his words fly. His head tossed back, his mouth open wide as the Denver native put himself into every song, whether holding his guitar or seated at the keys, and his ardor is outdone only by his wife’s.

Trigger-ready with an arsenal of wit and sass that comes from being raised in Mississippi and Tennessee, Carry Ann’s personality took over the stage during the first handful of songs, and she set the tone of the room, one where sarcasm was valued, even prioritized.

“This is a nice creepy little town you got here at this time of year,” she blurted out at the piano a few songs into the night. Although not necessarily a town with a collectively vast sense of humor, locals in the room chuckled as she elaborated, pointing to the mostly vacant West Street block as picturesque for the Halloween season, which reminded her of Salem, Massachusetts, and its tales of witches.

“I know this isn’t Salem, but it feels like the same weird white people did this,” she said, not afraid to say exactly what was on her mind and cracking up in the process. “It’s the perfect place to be this time of year.”

The boisterous Hearst, known for joshing about their relationship, seemed to almost be in character the way she would playfully scowl at Trent, then roll her eyes to the audience—and women in the room couldn’t get enough of it.

“If you think there’s this resentment thing going on up here on stage, that’s not the case,” she said, her smile sincere. She busted Trent’s chops and her own in talking about their practice with the accordion, which they thought would “add something dynamic” to their sound for the tour.

Her personality as large as the stage itself, what might be lost on Hearst is that she too is a talented musician, sophisticated in the way she plays one instrument, moves to the next, and her voice never faulters.

“I said I’d master the whole thing, ‘how hard can it be?’” her expression revealing that the accordion still might be an ongoing project, though no one in the audience would have known any different given the immaculate resonation.

Cary Ann’s commentary provided insight not just into the pair’s life together on the road as artists, but into many of the songs they played, including some of their most beloved hits, like “Birmingham,” one that helps define the band while telling the tale of their imperfect but inspirative journey together.

Observing the interaction between the couple while Hearst delivered some of the revealing lyrics in this track, the beauty of their story seemed to shine through for all to see, with one line in particular serving to remind everyone how this started:

“Made a little money playing in the bars
With two beat up drums and two old guitars
From the Crescent City to the Great Salt Lake
It ain’t what you got, it’s what you make”

Another track that paints a compelling picture of the relationship these two have built, “I’m Coming Out” benefits from a variety of effects on the Swimming Time album. But with no decorations and just Carry Ann’s voice crying out the words and Michael on the piano at Rams Head, it gave a whole new presentation to this track. Another song that has been recorded both electric and acoustic, “C’Mon Utah” was another successfully simplified version of itself, with just their fantastically drained pleads:

Stream the deluxe edition of Shovels & Rope’s studio album By Blood via Spotify:

With heart-breaking harmonies and a kind of exhausted hope that only comes from a place of experience, an acoustic version of “Mississippi Nuthin’” showed Michael and Carry Ann to be the world-class vocalists that they are, they’re weathered tones bursting at the seams to reveal true sentiments.

Shifting back and forth between the keys and acoustic guitar, and each of them taking a turn or two on the accordion, and Cary Ann grabbing the harmonica for six or seven songs, Trent and Hearst showed themselves to be skilled multi-instrumentalists, all while smirking and picking on each other in a way that could only be described as productive.

One of Shovels & Rope’s most streamed songs and recorded on 2014’s Swimming Time, “The Devil is All Around” captures the duet’s signature timeless, provoking sound. A haunting desolation to its opening, this pristinely constructed tune settles into a downtrodden rhythm with dejected words sung in the most vulnerable, lonesome pair of voices you’ll probably come across at Rams Head this fall.

“I’m going down a long road, maybe it’s the wrong road
But either way I gotta find my way back home again
It’s too late to turn back now, gotta get the lead on out
Gotta find some way to make it right on …

So I’m gonna be a good man, gonna do the best I can
Though I’m a shell of the man that I once was
And if I find forgiveness in the eyes of god
It will be hard won, I assure you.”

Watch Shovels & Rope perform Live on KEXP from their home, recorded in May of this year, on YouTube:

A wailing, doleful take on “The Last Hawk” let Hearst show off her pipes and an elegant, ear-pleasing piano solo in this brisk but whimsical track from the 2016 record Little Seeds. And a treat for devotees of the duo, Michael and Carry Ann performed “Collateral Damage,” a track from their forthcoming album, Manticore.

Toward the end of the night, Michael addressed the Shovels & Rope travel scenario — they are scheduled to be on the road through November and then, next spring will tour aggressively through the US and Europe.

Having played hundreds of shows a year in their earlier days, each and every Shovels & Rope appearance now requires a great deal of off-stage coordination. What used to be two people in a van with their gear is now a bus large enough to transport two children, a 6-year-old daughter and a 2-year-old son, as well as members of their management team, gear, merchandise and more.

Taking a serious departure for a second, maybe even catching a lump in his throat, Michael recalled that when Cary Ann had their daughter, they became unsure if they would be able to continue the life they’d created. But they decided that the best thing to do for themselves and their growing family was to double-down.

“It’s what we wanted in the first place, to continue to do this and have a family,” Trent said, met with approving applause from an audience that, if it had been unfamiliar beforehand, had certainly gotten to know these two through the set, even if some of it was an act.

Closing out with their latest release from the forthcoming album, “Domino” showed Michael and Cary Ann really don’t need a band, as the two of them can literally emulate the recorded version of this track’s pumping, electromagnetic waves with just a piano, guitar and their united inflection.

As the final note came off the keys, the cheers swelled and echoed off the venue walls, and it was clear this audience would have watched these two into the wee hours, even if way past the bedtime for some of them.

Here are images of Shovels & Rope performing at Rams Head on Stage on Nov. 3, 2021. All photos copyright and courtesy of Casey Vock. 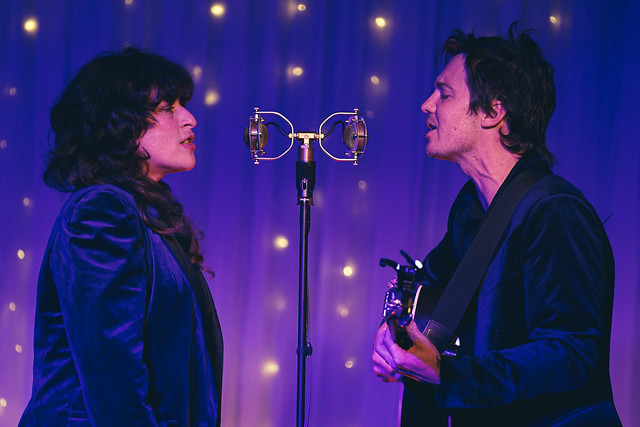 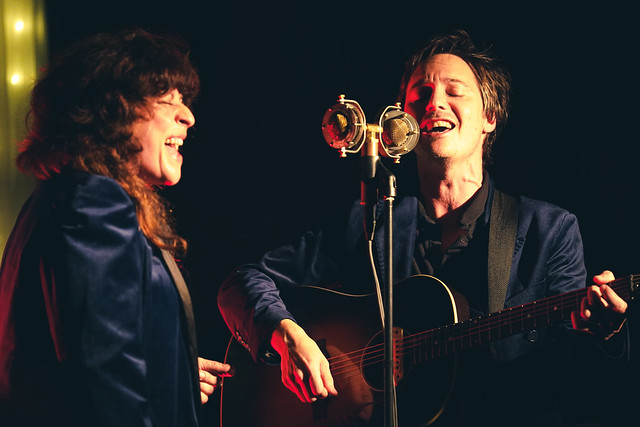 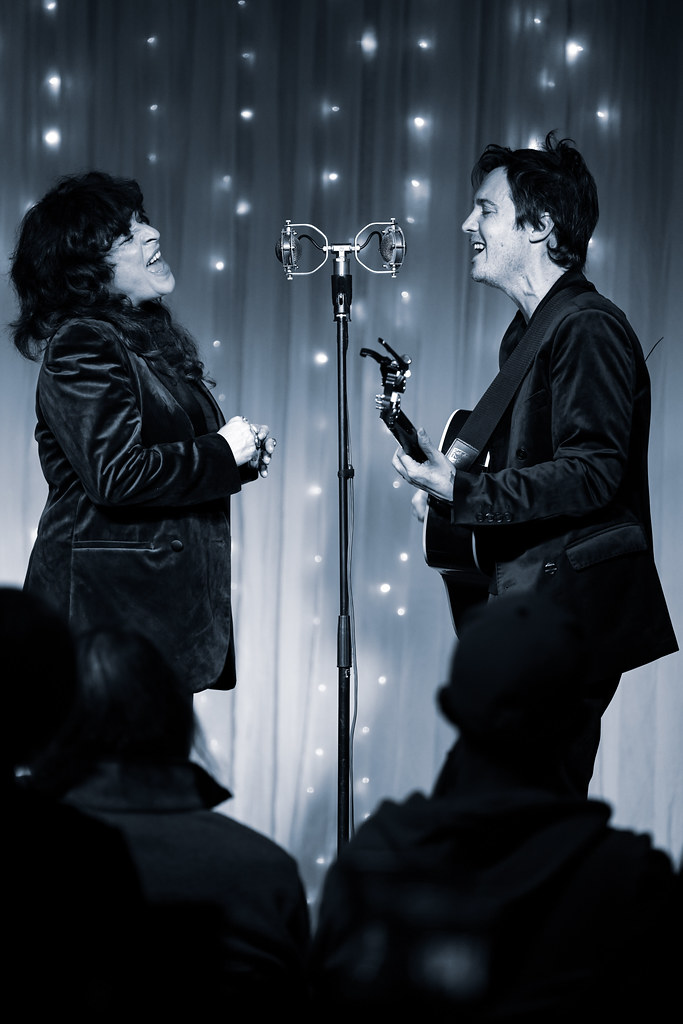 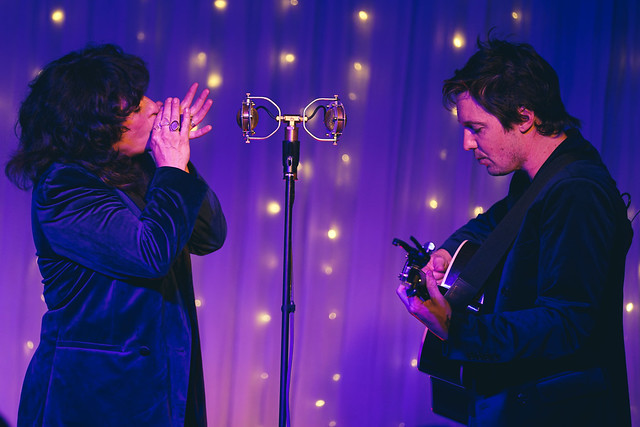 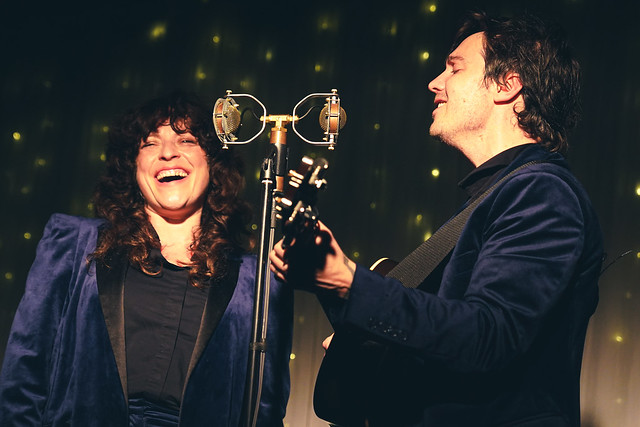 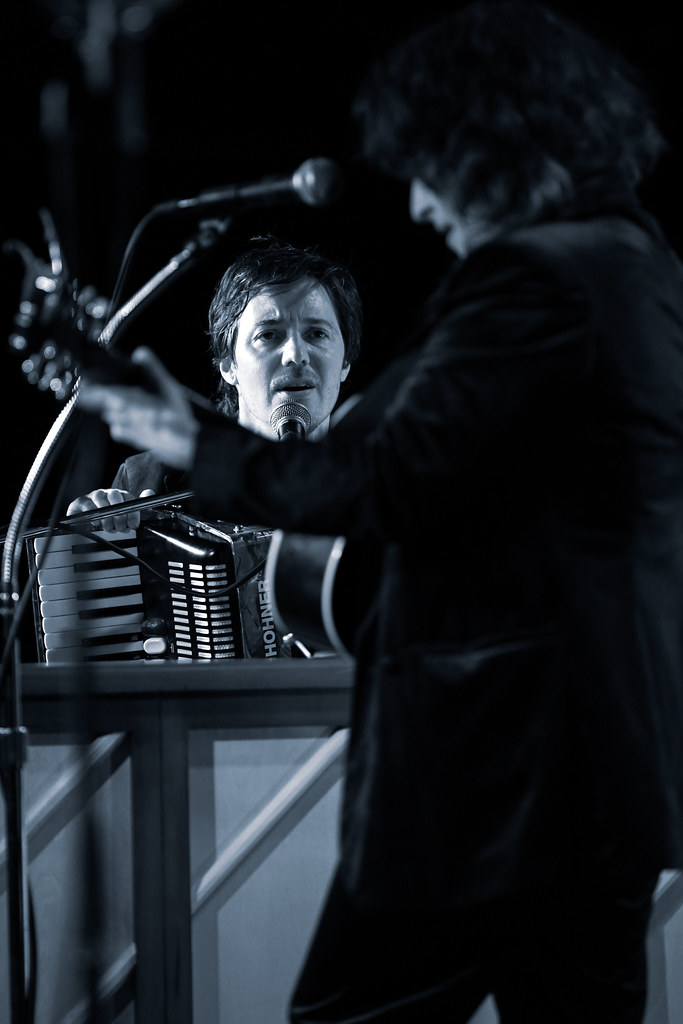 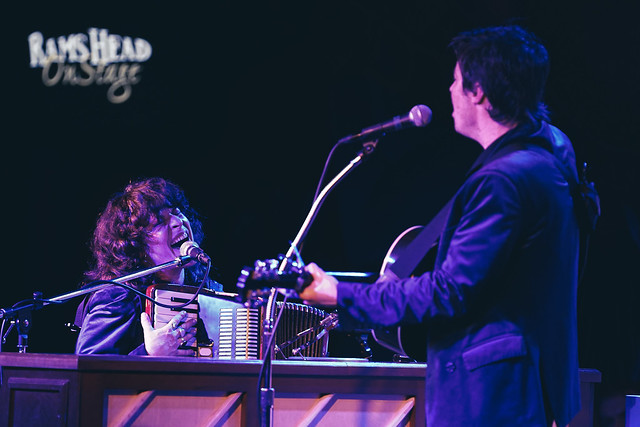 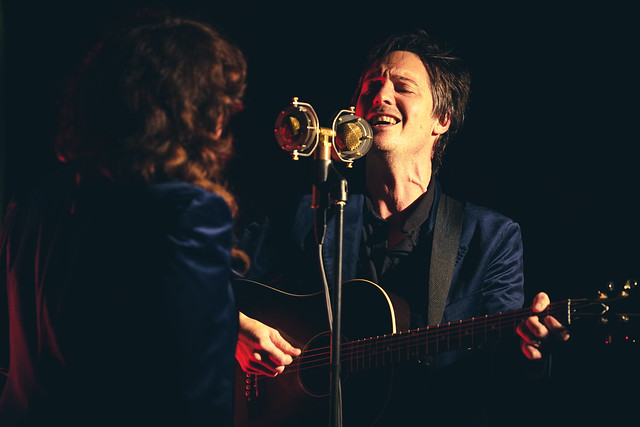 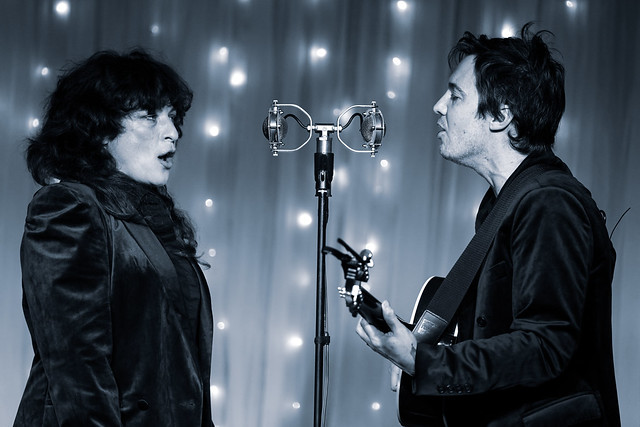 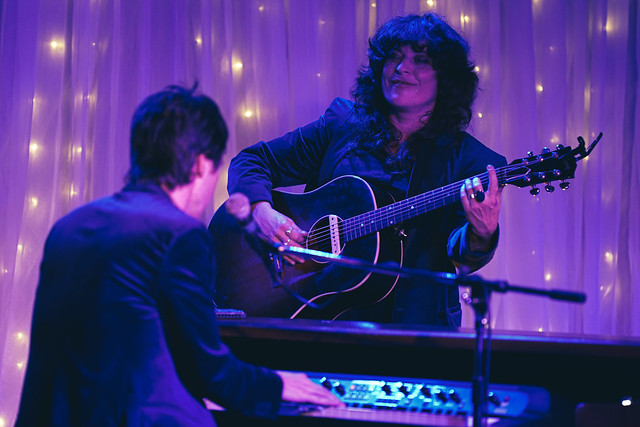 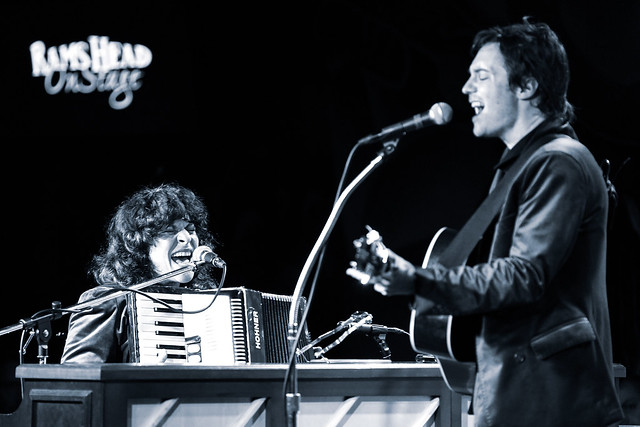 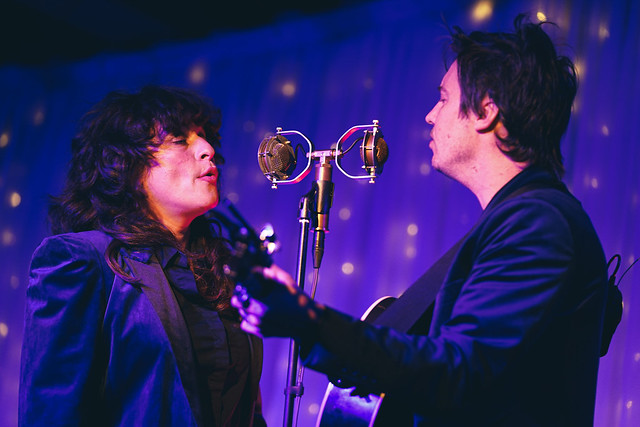 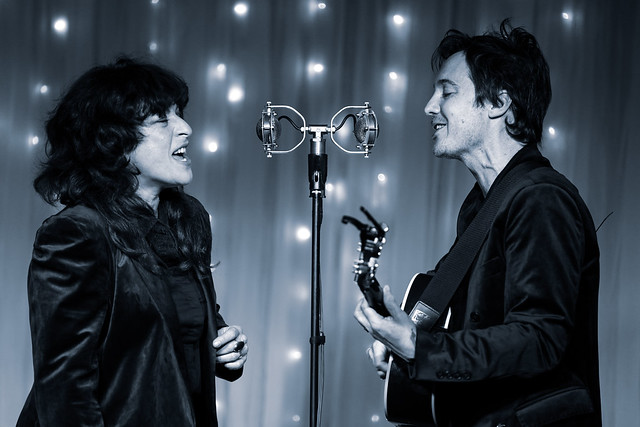 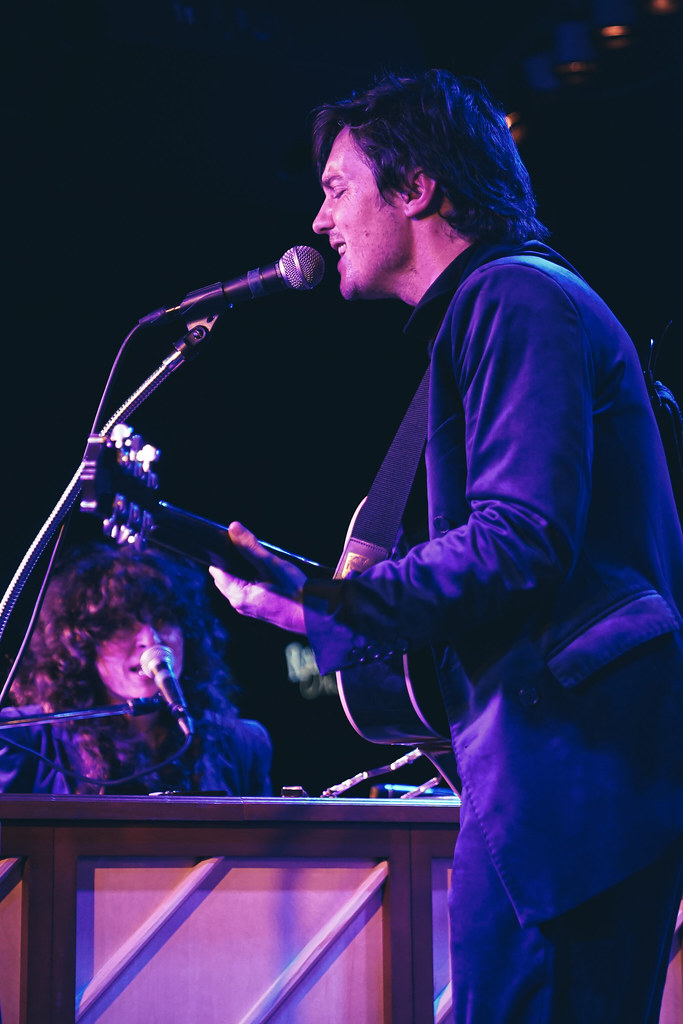 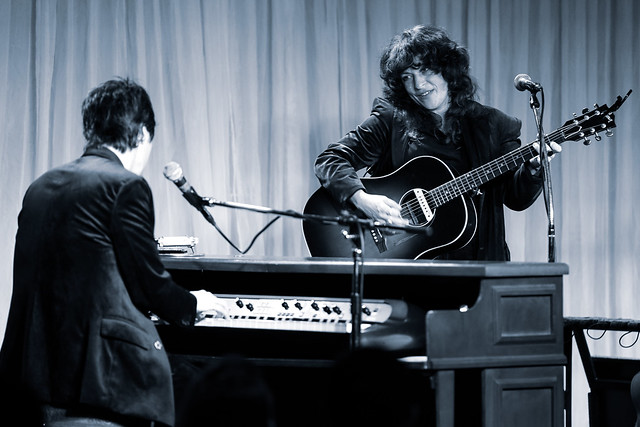 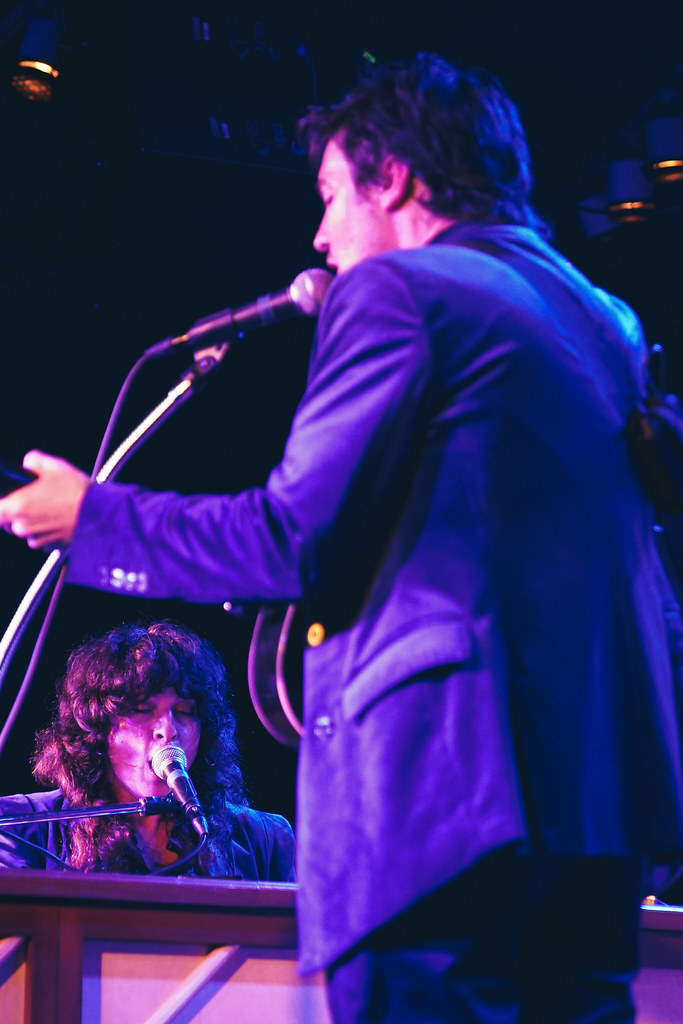 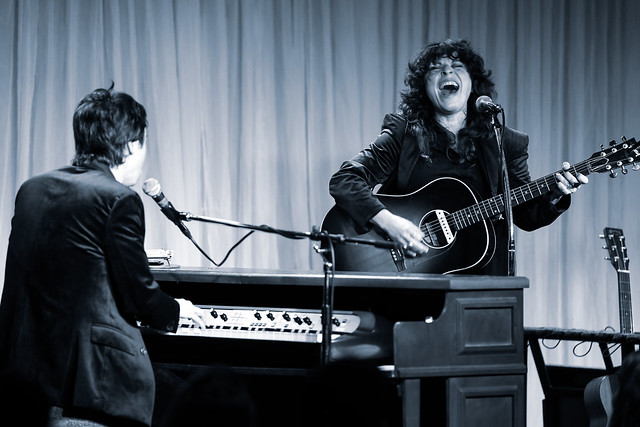 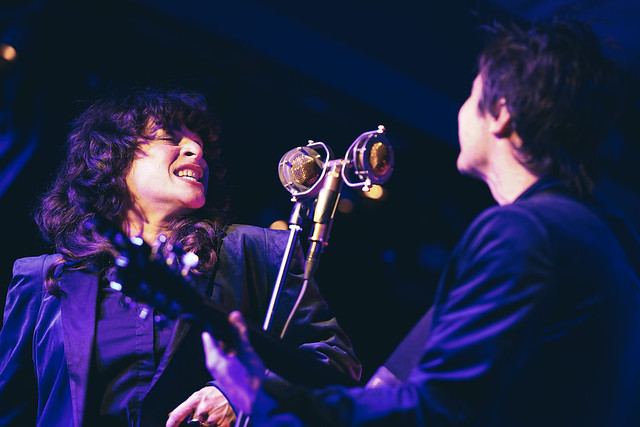 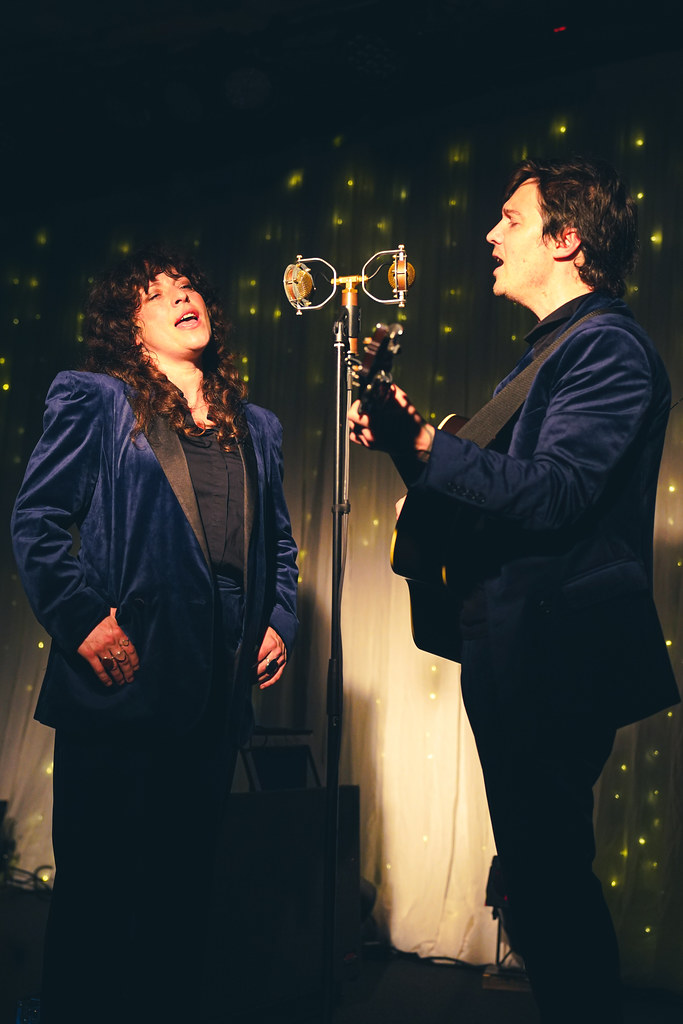 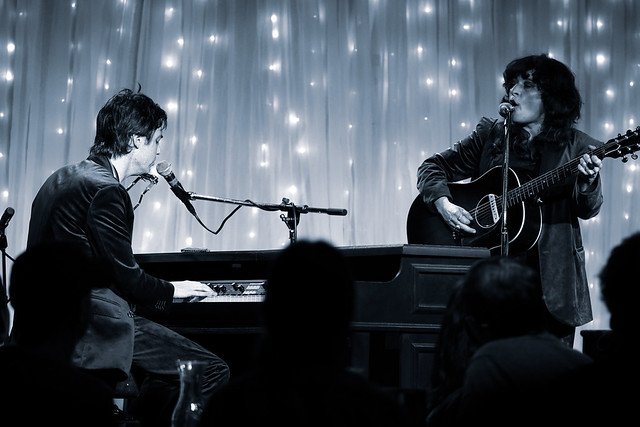 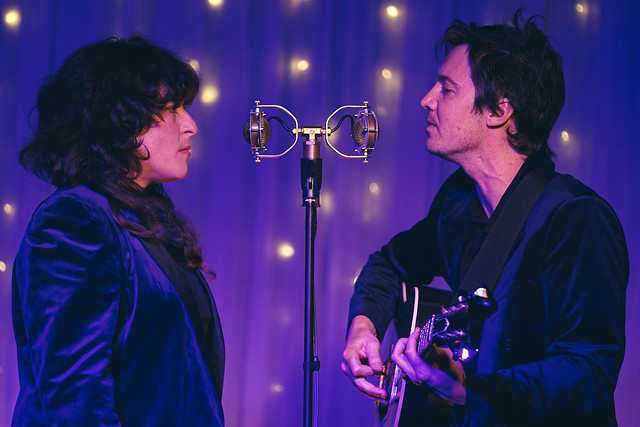 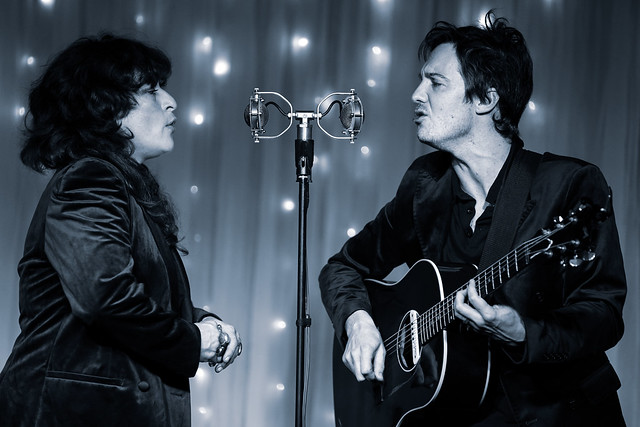 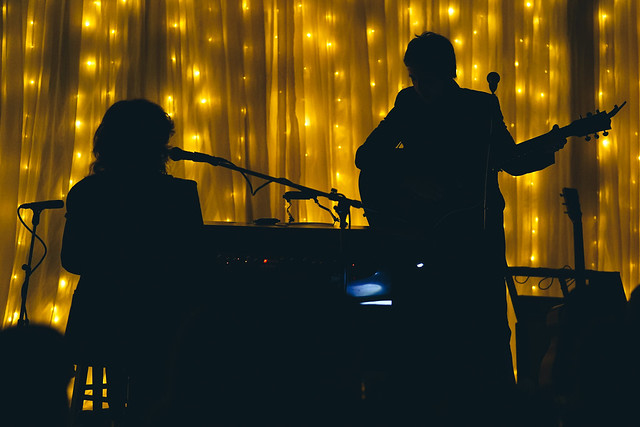