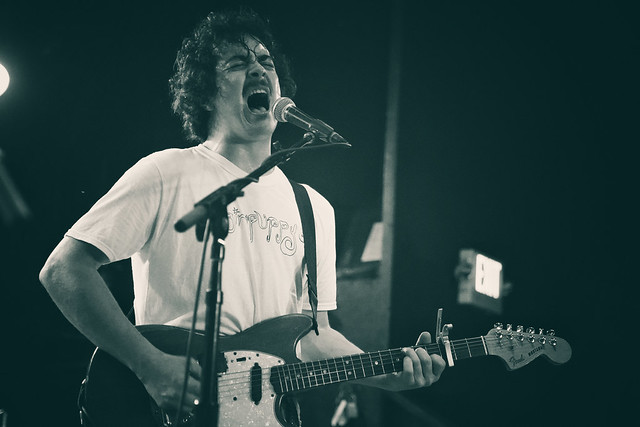 Rob Grote leads The Districts in a performance at Ottobar in Baltimore on Nov. 7, 2021. (Photo by Casey Vock)

With so many talented, creative indie rock bands offering music to a world that’s hungry for the best of it, it’s not easy to stand out and to keep fans coming back to shows.

The Districts seams to make it look easy though, seemingly always on tour, playing one of the last shows Parklife DC covered in early 2020 before the shutdown, and then as of late playing a couple of shows in the DC/Baltimore region as part of recent tours.

That’s been the way for this group that got its start when its members were just high schoolers up in Lititz, Pennsylvania. Touring relentlessly and honing their sound, The Districts have made a name for themselves around Philly, where they’ve lived for the better part of the last decade and where they received crucial support from local media and music lovers as they strived to find their way.

For good reason — it only took a couple of self-released albums and one studio session to attract attention from Fat Possum Records, and The Districts rolled out a well-received self-titled EP under that respected label in 2014. That momentum timed favorably for the release of what would be the wildly successful A Flourish and a Spoil in 2015, a mind-blowing album that still fuels the band’s sound.

The band, led by head singer and songwriter Rob Grote, has released three addictively pleasing albums since then, and—battling through the pandemic, as well as some personnel changes — appears poised to enter 2022 in a full sprint toward the release of their fifth Fat Possum album, Great American Painting, set to drop on Feb. 4.

Currently sitting at about a quarter million monthly Spotify listeners, the group gained important exposure this summer as the opening act for Modest Mouse, including their first appearance The Anthem in DC.

Watch the official video for The Districts’ newest single, “I Want to Feel It All,” via the band’s official YouTube channel:

The Districts are in the unique position as to be followed by listeners around the country — and overseas, too — but still so deeply connected to the Mid-Atlantic region as to make their Nov. 7 show at Ottobar in Baltimore the final of their fall tour, with another headlining appearance already scheduled for April 13 at 9:30 Club — they already have 50 gigs booked through the first quarter of ’22.

Clearly energized to take any and stages — The Districts played more than 200 shows over the course of two years to push the 2017 album Popular Manipulations — they did so with a sense of endearment last Sunday night, stepping out to a rowdy Ottobar crowd that included some individuals who’d hit numerous shows on a tour that saw the band start in Michigan, head down the center of the country and swing back up the East Coast.

The four members of The Districts concocted a vigorous, throttling set that pulled from each of the group’s major releases, including several new tracks to be featured on Great American Painting, including an absorbing, raw edition “I Want To Feel It All” performed solo by Rob.

Showcasing compositions with explosive, perplexing, even contemplative resonance and removed yet petulantly urgent vocals, it was all enveloped in a climate of different effects and textures that, as part of a the group’s greater atmosphere, easily transcends the current notions indie rock.

Leading off with “Salt” from the 2017 studio album, Grote’s lamenting, taut voice grabbed right ahold of the audience, delivered with glare as the band gradually built from this song’s otherworldly beginnings to a deliberate, grandiose projection that essentially increased not only the volume but the size of the tune, filling up the room as if the band had staked its claim.

“This is the last night of our tour … I’m sad,” Grote said before asking the audience to applaud their opening act for this run, the Atlanta-based indie act girlpuppy, as well as Baltimore’s Leisure Sport, recently added to the Nov. 7 bill and the first group to take the stage at Ottobar.

“This is one of the last places we played before all — this …,” Grote faded but his message was clear and his gratitude evident. He shared a story about friends of the band from Baltimore who used to live on 26th Street, the same-numbered street he and his mates lived on at the time in Northern Philly. Those friends, lovers of wine, had too much to drink one evening before The Districts even showed up.

“There was wine barf everywhere,” Rob cracked up. “It was just one of those Baltimore moments.”

Stream The Districts’ album You Know I’m Not Going Anywhere via Spotify:

On stage and during songs, Grote can swing from obscure to mighty, whatever emotion he’s bottled up seeming to let loose when he steps to the microphone to deliver his words with fervor. When he unwinds on his electric guitar, his body becomes limber and he can fling himself in any direction with what looks like no control or concern for consequences. When he chucks the guitar to his side and starts to dance, it is infectious — his shoulders toss, his hair flicks, his knees pump, and he looks like he was born to lead this band.

Pat Cassidy, who joined the band five years into its existence, looks like a super-hero of a guitar player — electric and bass — trying to disguise himself, but unsuccessfully. Wearing a conspicuous trench coat, his long hair stringing down over his hands and instruments, Pat plays with action and adventure, and he brings immeasurable potency and a teetering, sharp edge to the music.

Dodging screams from nutty fans all night long, Pat too said he was bummed to see the current tour come to an end.

“The last night of tour means we’re not going to be in a hotel room together,” Cassidy got right to the point, sliding his hair to the side to see those in front of him. He called his bandmates “predictable jokers” but said some nights they’d still have to be “afraid” of what each other might have up a sleeve.

“We get to sleep in our own beds tonight,” he said, partially relieved.

After playing the first handful of songs with the electric guitar, Pat grabbed the bass from multi-instrumentalist Braden Lawrence and was seamless in helping the band shift accents for an eerie and vexing take on “My Only Ghost” from You Know I’m Not Going Anywhere, a quintessential COVID album released on March 13, 2020 — the day after DC’s venues were shuttered, and just three days after The Districts headlined what would be the second-to-last show at 9:30 Club before the halt.

Lawrence, who was drumming for The Districts the last time they played Ottobar and 9:30 Club, manned the keyboards and other contraptions all night long. “That mother fucker used to drum — he can do it all,” Grote said of Braden during the set. And Braden did, handling bass and simultaneously playing keys, demonstrating that there’s plenty of work to be done in order to pull those songs off even close to how they sound on recorded albums.

Operating from his control deck, Lawrence is much like the group’s central command, and with so much to do he was the only one who really didn’t get to move to the music he was making. A prime example of the deep ambience Braden layered into songs was heard on the back half of a hectic take on “Sidecar,” a song that decelerates and finds itself drifting in a bubble, and the audience at Ottobar swayed as this song faded back to whatever dream it came from.

Alex Held joined this tour to fill in on drums after former bass player Connor Jacobus left the band and Lawrence selflessly adjusted his duties. Alex showed that he can fit right in with this band, most importantly that he can keep up with the relentless speed with which Grote fires about and Cassidy cranks his arms.

Watch the official video for The Districts’ 2020 single “Cheap Regrets” via the band’s official YouTube channel:

Held helped the presentation have force for every song, save the two the Rob performed on his own. During the encore, amid a stylish and groovy take on “Cheap Regrets,” and with members of girlpuppy brought on stage for the finale, Alex was wide-eyed, primal, in the zone, and he helped the band look and feel like they’d not skipped a beat.

Rather, The Districts returned to Ottobar with a mastery of their sound — their skills primed, even if worn down from the road —and used it to sophisticate a packed venue where the band members genuinely love to play.

Here are images of The Districts, plus the night’s opening acts, Girl Puppy and Leisure Sport, performing at Ottobar on Nov. 7, 2021. All photos copyright and courtesy of Casey Vock. 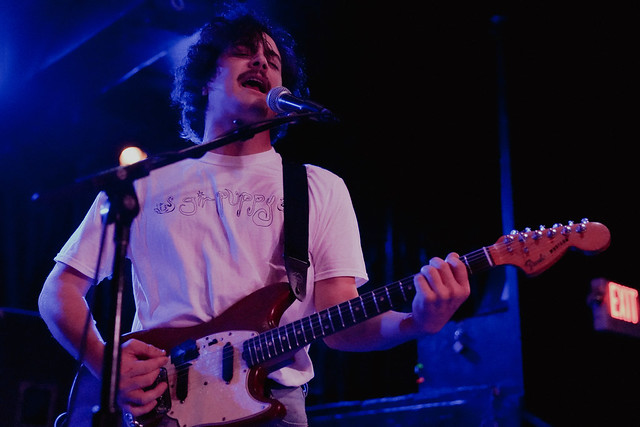 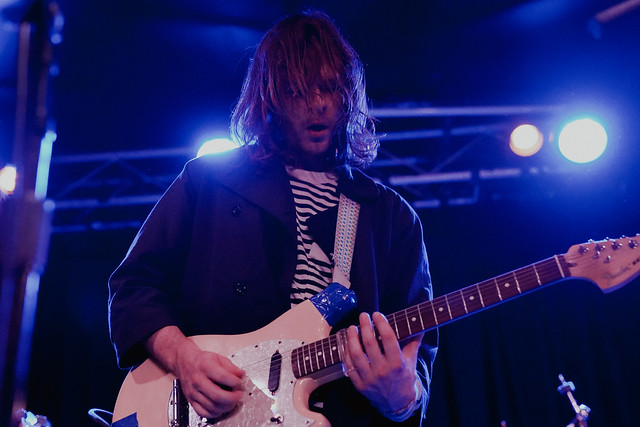 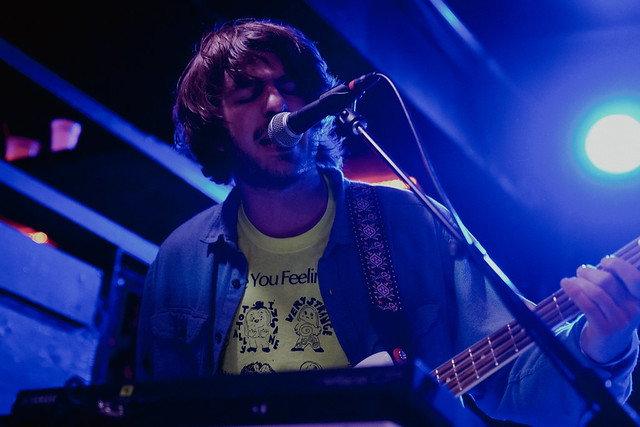 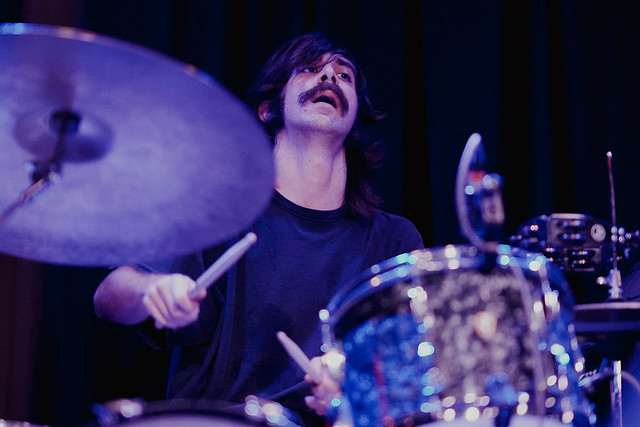 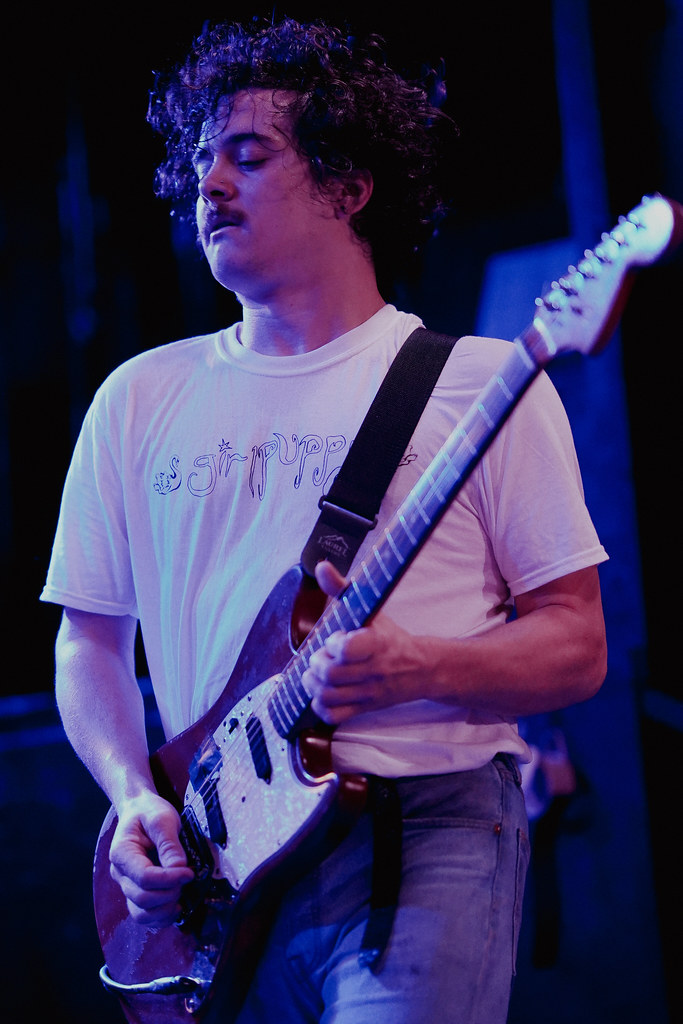 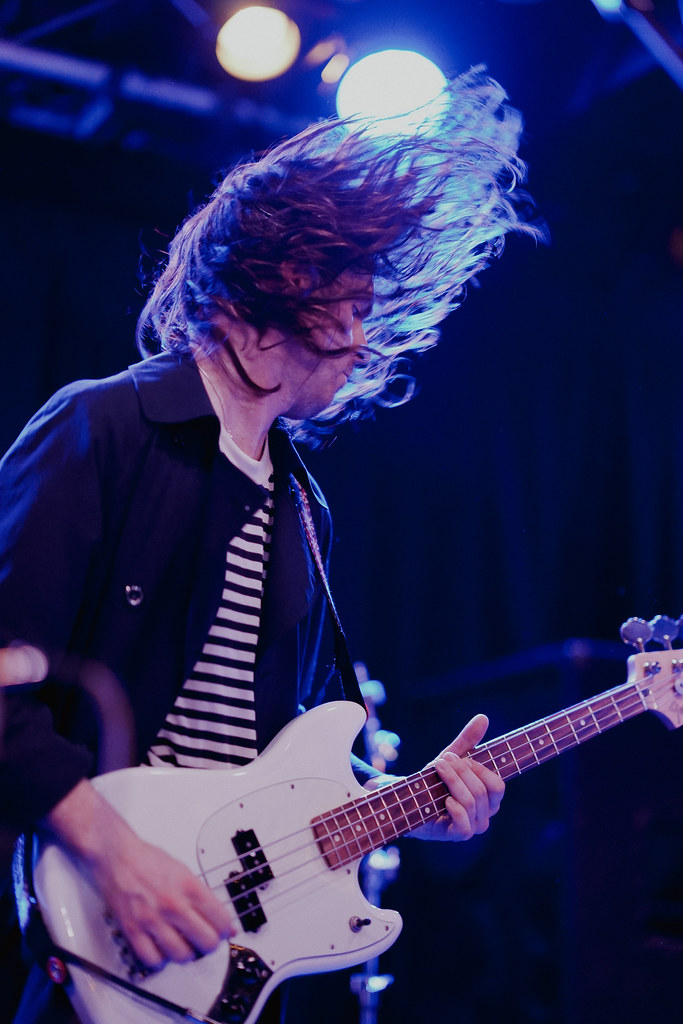 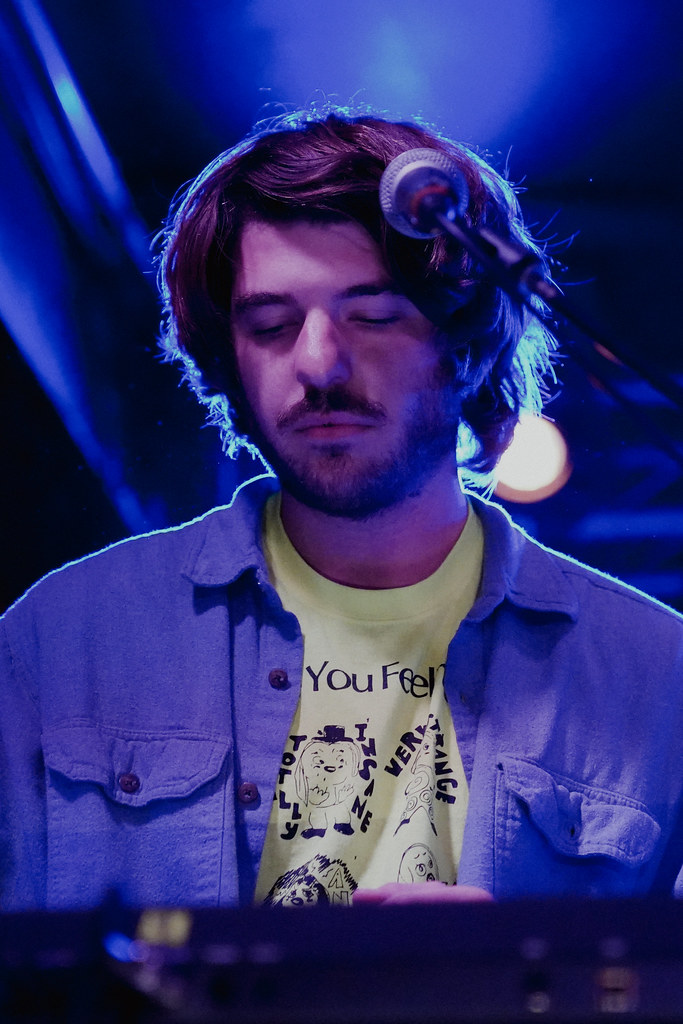 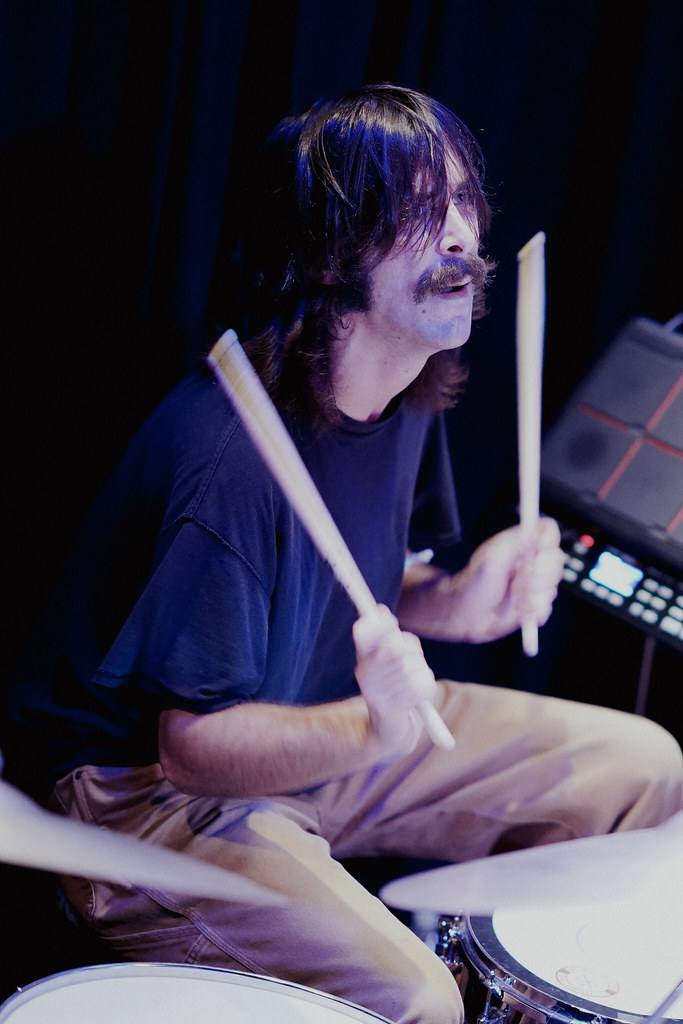 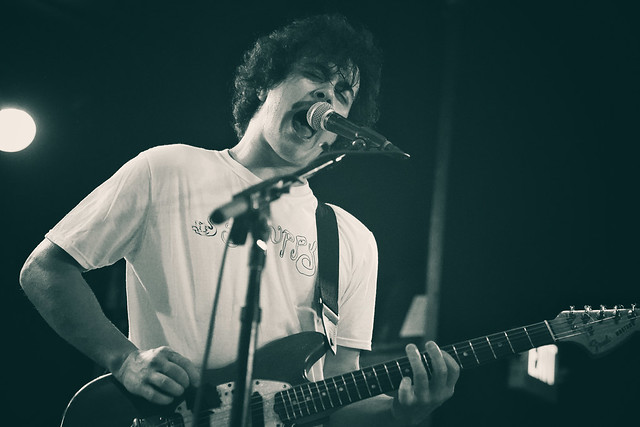 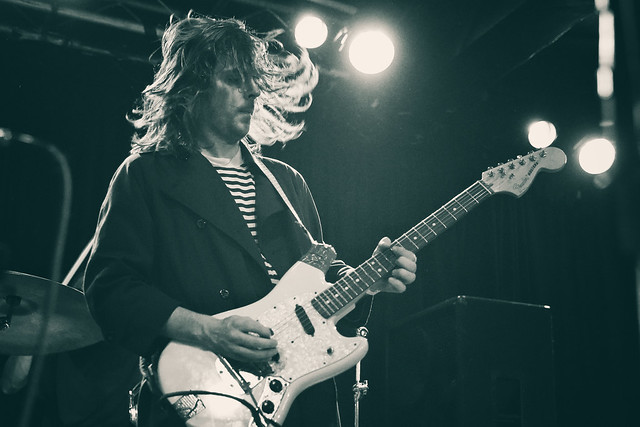 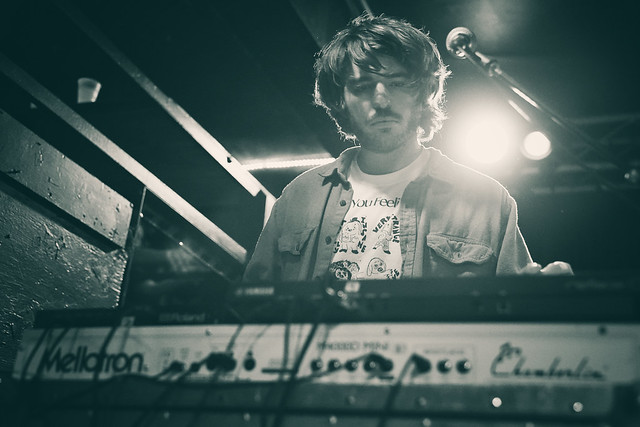 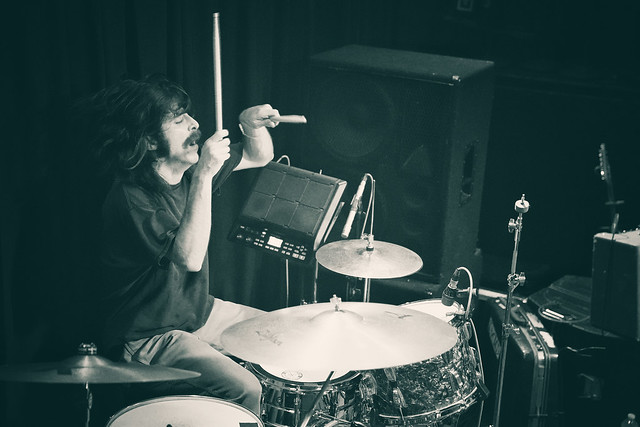 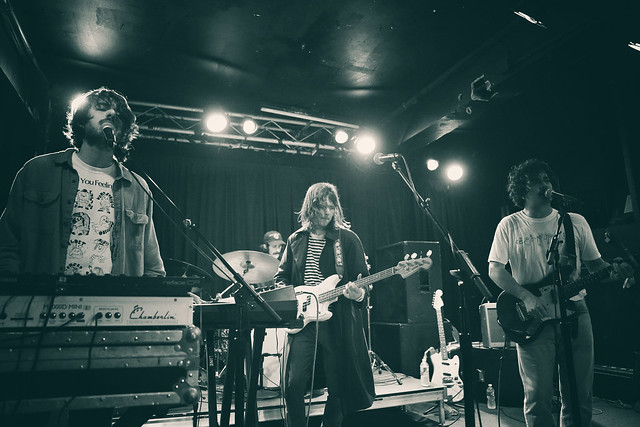 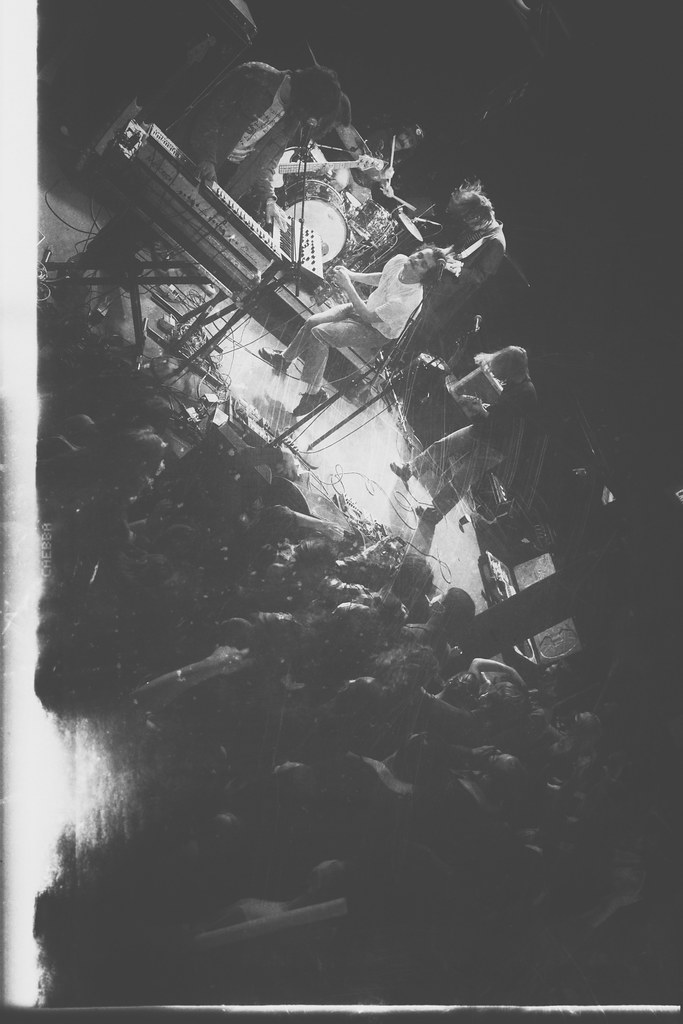 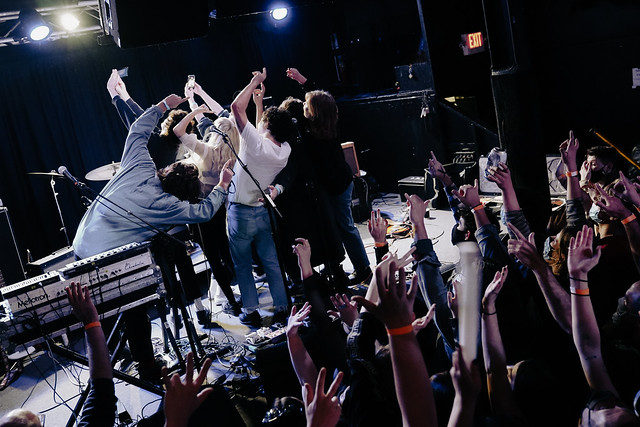 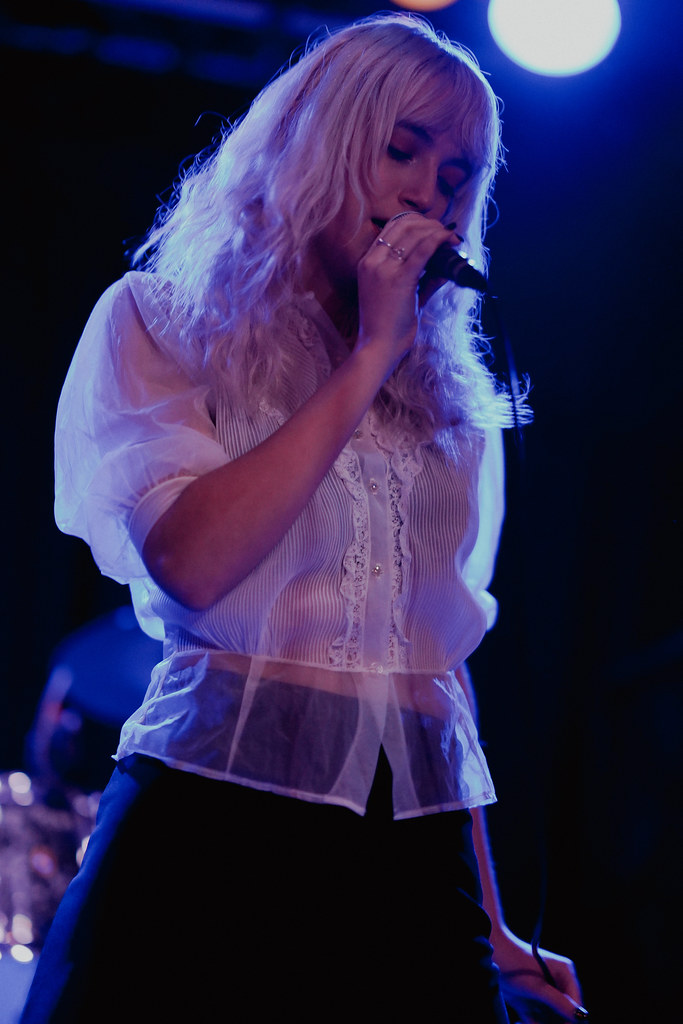 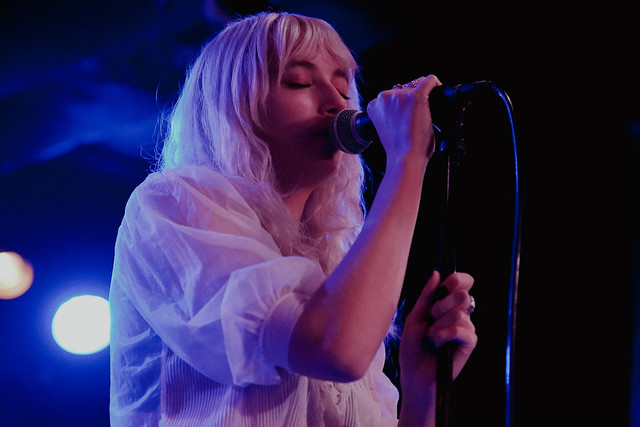 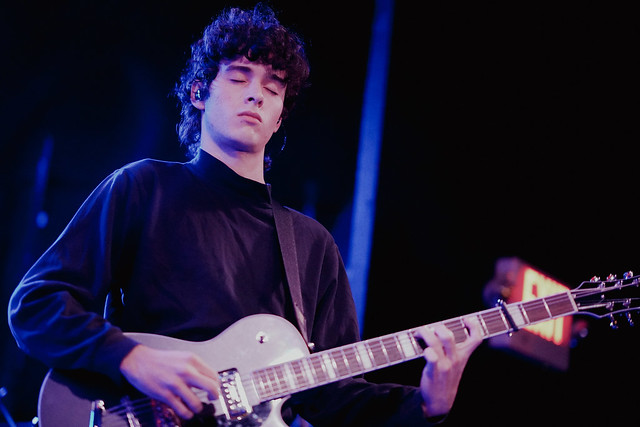 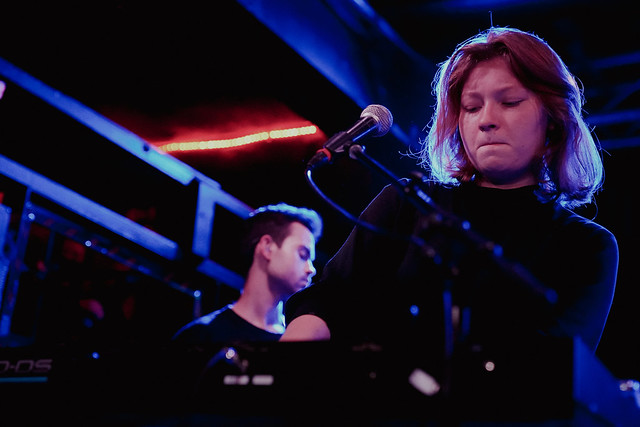 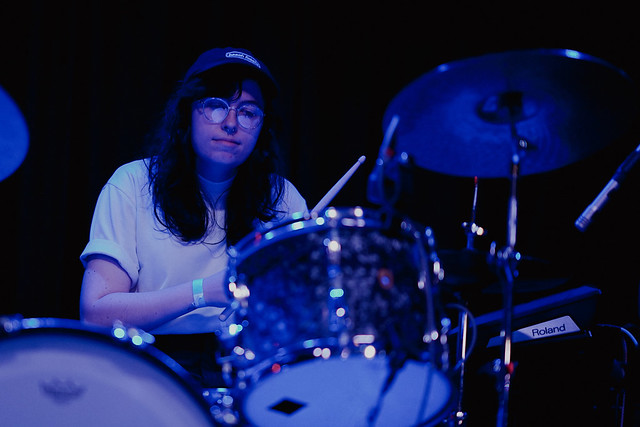 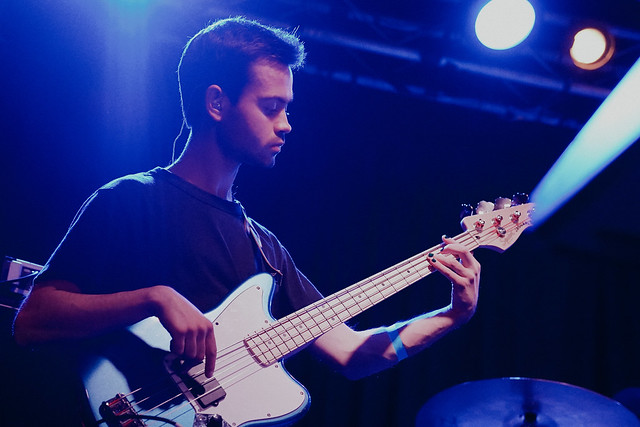 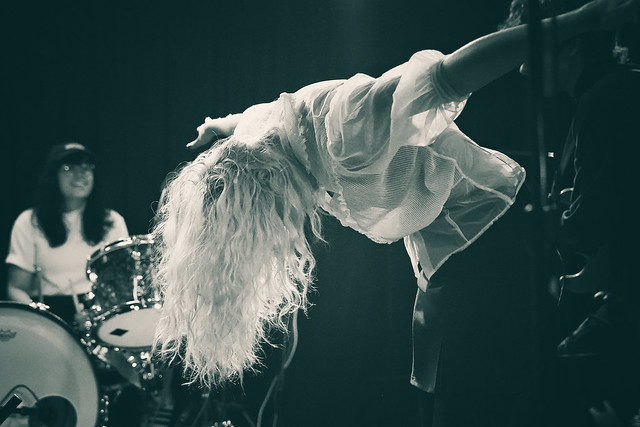 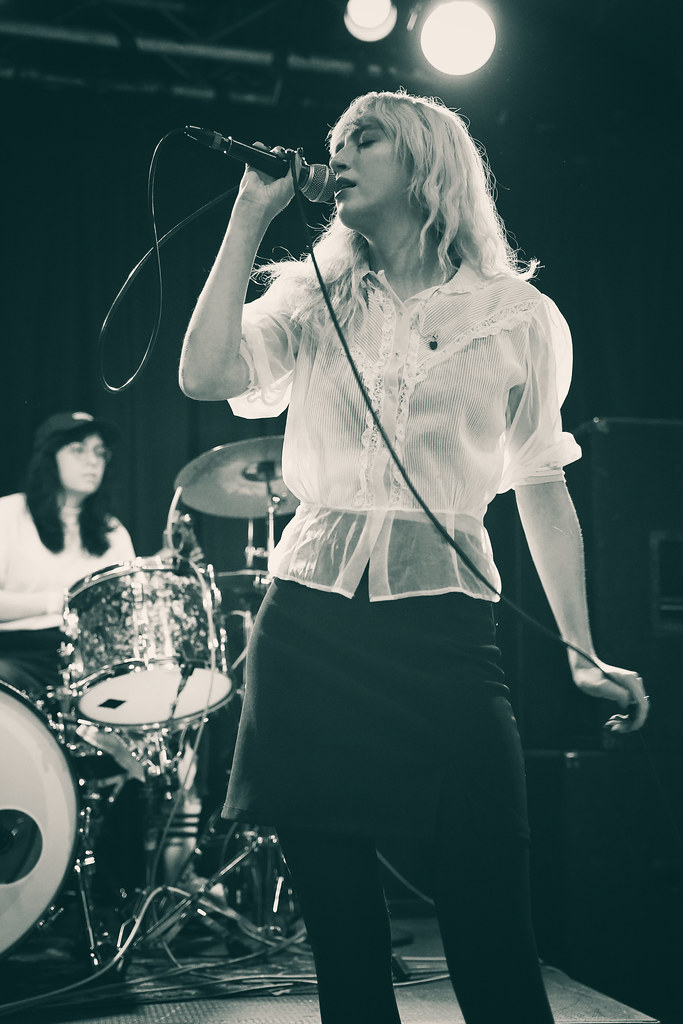 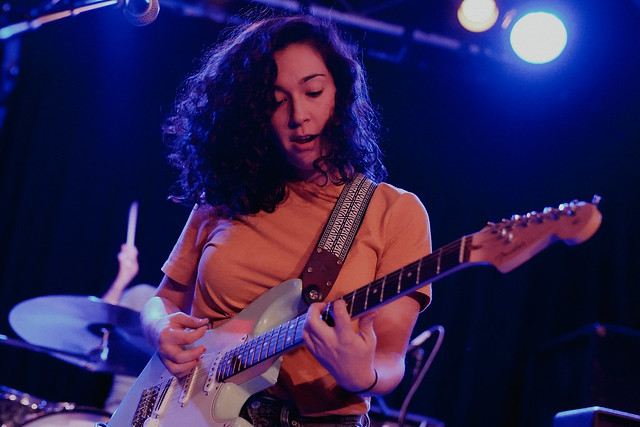 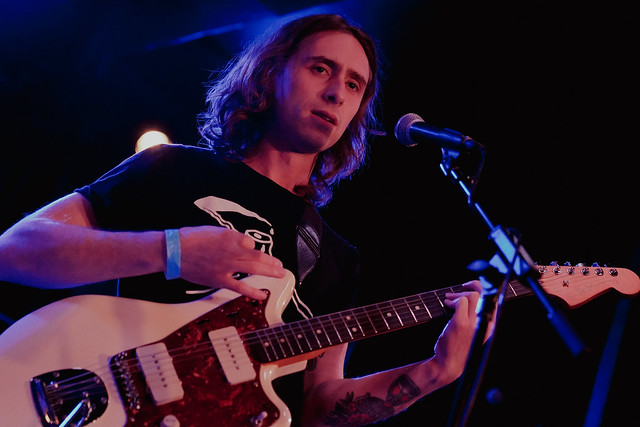 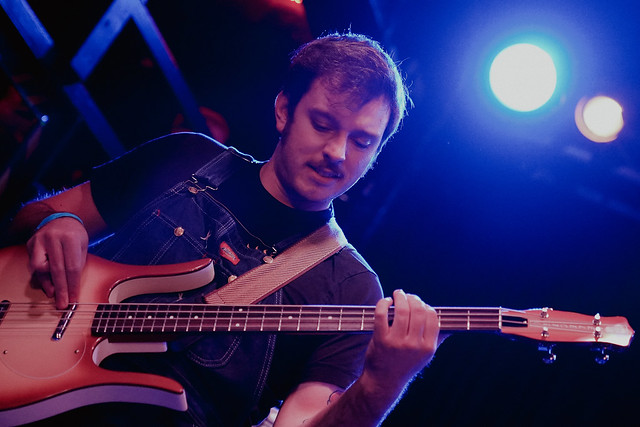 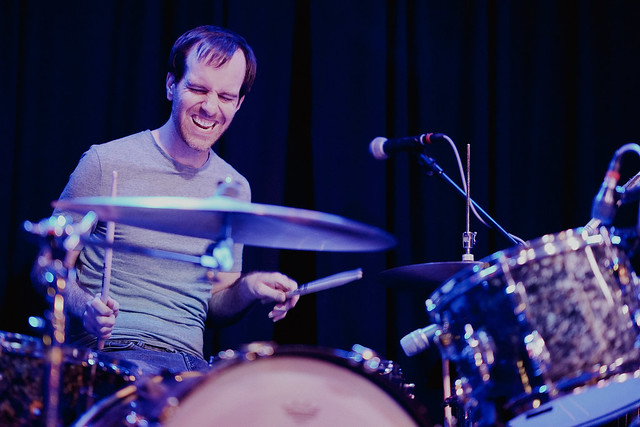