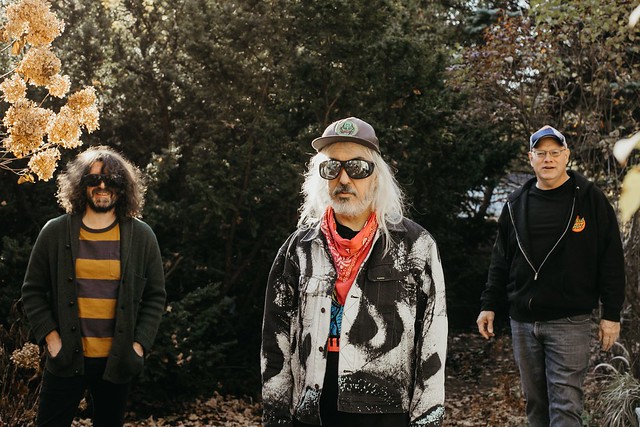 For nearly 40 years, Dinosaur Jr. has established a reputation as one of the best, most innovative alternative rock bands — and one of the loudest. On Tuesday evening, they lived up to that reputation when they appeared at a sold-out 9:30 Club, with Chicago guitarist Ryley Walker opening.

While you might not hear a lot of superficial similarities between Walker’s music and Dinosaur Jr.’s, Ryley said that their music “means the world to me.” A native of Rockford, Illinois, Walker emerged from the Chicago experimental and improvisation scene with an eclectic sound that had roots in English fingerstyle folk, world music, and even the jams of the Dave Matthews Band, whose songs Ryley devoted an album to. On Tuesday evening, he appeared as part of a quartet that also included guitarist Bill MacKay. Ryley’s songs tend to run on the long side, so he played just a handful of tunes in his set, which ran a bit more than 30 minutes, and focused on his latest album, this year’s Course in Fable.

Dinsoaur Jr. — J Mascis (guitar), Lou Barlow (bass), and Murph (drums) — formed in Amherst, Massachusetts, in 1983. They are often credited with returning lead guitar to a place of prominence in indie rock, and J Mascis has been listed in Rolling Stone’s 100 greatest guitarists. The band is often cited as a precursor to the grunge bands that broke through in the early 90s, and they toured with Nirvana. The trio released their first album, Dinosaur, in 1985, but it was 1987’s You’re Living All Over Me, that really made their mark on the music world. Perhaps its most iconic song is “Little Fury Things,” which, as they did in Tuesday evening’s encore, the band still includes in almost every set they play; the set also included “Kracked” and “Sludgefeast,” which sounds exactly like its title.

Watch Dinosaur Jr. perform a short set, including “Kracked” and “Sludgefeast” live on KEXP at Home via YouTube:

Dinosaur Jr. is not a band that engages in a lot of stage banter; Ryley may have said as much between songs as they did in their entire set. J is famously dour, a man of few words, and Lou probably spoke more. (He greeted his sister, who was in attendance.) Dinosaur Jr. is all about the music, and the music is loud; this was, without question, the single loudest show I have ever been to, and I was glad I had been warned that earplugs are a necessity. (A very nice young couple who were next to me during the show did not bring earplugs, and they looked a little shell-shocked by the end of the night.)

The night opened, as the band’s set have, consistently, on this tour, with “Bulbs of Passion,” a cut from that first album. They returned to Dinosaur later in the set with “Mountain Man,” and they closed with “Gargoyle.” They then moved on to material from their latest album, Sweep It Into Space, which came out earlier this year: album opener “I Aint,” “Garden” (one of Barlow’s compositions), and, later “I Expect It Always,” “To Be Waiting,”  and “I Met The Stones” (which is not about the Rolling Stones, but rather something decidedly more abstract and, as like much of the album, vaguely sci-fi themed).

For the rest of their set, they delved into their catalog, playing songs from throughout their long career. “Been There All The Time,” was released on their 2007 comeback album, Beyond, while The Wagon,” from 1991’s Green Mind, and “Start Choppin'”, from 1993’s Where You Been, and “Feel the Pain,” on 1994’s Without a Sound, came from their so-called middle period, during which Barlow was not with the band). “Freak Scene,” from 1988’s Bug, was another entry from their “early” period.”

For their encore, the band played another one of their new songs, “I Ran Away,” before closing with crowd-pleasers in “Little Fury Things” and a cover of the Cure’s “Just Like Heaven.” Throughout the showed, the instrumental work, especially J’s lead guitar, was phenomenal; he was and is one of the best players in the world. If you’re at all a guitar geek, you owe it yourself to see this band. “Freak Scene” may be the most apt title of a Dinosaur Jr. song: these guys, especially J, wear their strangeness as a badge of honor, happy to inhabit the space beyond nerds and geeks that’s occupied by the most left-of-the-dial weirdos. And that, for me, is my happy place.