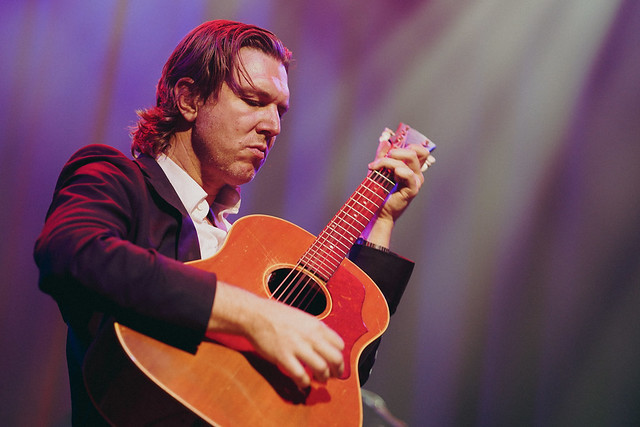 The pandemic has had a profound impact on the live music industry, unfortunately creating a dearth of opportunities for some artists, but concurrently providing inspiration and much-needed time for others to essentially hit the reset button.

A number of the tours assembled over the last few months, maybe more than usual, have been of the double-bill type, a benefit to cities along the way with venues considered must-stops.

One such an outfit to recently visit the area was the tantalizing duo of DC native Hamilton Leithauser and Kevin Morby — a pair of accomplished musicians who set out in mid-October on what was dubbed the Fall Mixer Tour, a quest through 29 different cities that wrapped up last week at 9:30 Club with an abundant, exhilarating night of entertainment.

Such a jaunt made a lot of practical sense, as both men hadn’t been able to earnestly promote their 2020 albums — Leithauser’s “The Loves of Your Life” released last April, Morby’s “Sundowner” last October — and with the duo offering their first co-written single in the days before the tour began, “Virginia Beach,” all the ingredients made this a can’t miss affair.

Watch the official lyric video for “Virginia Beach,” a single released this fall by Hamilton Leithauser and Kevin Morby on YouTube:

Morby was the first of these co-headliners to take the stage the night of Nov. 23, and even though his set might have been slightly compressed at just 12 songs, Kevin would make the most of it, showing his natural, care-free abilities as songwriter, vocalist and guitar player.

Sporting his favored business suit and wasting no time in between each selection, Morby presented songs that feature his signature sounds, the same that can be heard echoing through all of his recorded work beginning with the 2013 breakthrough “Harlem River.”

He opened with “Congratulations,” a festive waltz that showed off the variety of instruments and personalities assembled on the stage — maybe most notably the saxophone played by Cochemea Gastelum, his world-class, freakishly talented wingman who is a pioneer and star in his own right. Cochemea’s solo toward the end of this song packed punch, a bursting frenzy drenched in blues and then coated in sass.

On stage too to start Kevin’s set was his partner and regular co-pilot, Katie Crutchfield, who performs as Waxahatchee, has received immense critical acclaim and herself a recent headliner at venues in DC. Her voice as dynamic and as stunning as any you’ll hear today, Katie gave a glow and striking resonance to the first song and the second, “Campfire,” a lead single from Kevin’s Sundowner album and one that’s also featured on A Night at The Little Los Angeles, a collection of homemade 4-track pre-Sundowner recordings released this fall

Stream Kevin Morby’s recently released 4-track home recordings on the album A Night at the Little Los Angeles via Spotify:

Also on stage for “Campfire” was the night’s opener, Jess Williamson, a rising singer-songwriter and guitar player out of Los Angeles. Add Morby’s longtime guitarist Cyrus Gengras, bass player Greg Roberts, drummer Stephen Patterson and keyboardist Dave Sherman, and the stage was transformed into a gala.

Slowing it down, Kevin’s voice was at its most spacious, most beckoning in a stark take on “Don’t Underestimate Midwest American Sun,” a track from Sundowner featuring crisp, expressive acoustic guitar and chimes deep in the background, along with remarkable words on this ever-changing nation:

And he cranked his ferocity back up for “Wander,” a journeying, introspection from Sundowner that swells up only to be engulfed by its own untamed curiosity.

Three songs in a row from Morby’s already-classic album, Oh My God, moved the set along, as he and the squad surrounding him rolled through majestic takes on “Hail Mary,” “No Halo,” and “Piss River,” each unforgettable tracks, the three of them sonically related as is the entire album.

“DC, thank you very much — we’re happy to be here,” he blurted a few songs into the set, and his small talk didn’t advance much beyond that, other than his introduction to a promising new tune he’s titled “Five Easy Pieces.”

“DC is the last show of the tour, so we did it — no COVID,” said Morby, who early in his career was the bass player for the folk-rock band Woods. “Last year sucked. We all know why. … Here’s a new song.”

Watch the official music video for Kevin Morby’s “Wander” from the album Sundowner on YouTube:

The crowd, however, would see him momentarily break his character altogether when a member of the audience apparently fell to the floor. Stopping the music immediately during his 2014 hit “Parade,” Morby called for security to address what looked like a serious situation in the crowd.

A half minute later, after security rushed to the area of concern, two men — one clearly under the influence of booze — awkwardly emerged from the crowd, eyes wide, and scooted out the room’s main entrance. “They think you had a fucking seizure!” one exclaimed to the other.

After blowing a kiss to the ticketholders who had tried to help the man, Morby reiterated the thoughts of musicians far and wide:

“It’s so incredible to just be able to play, and to play with DC’s own,” Kevin said, a reference to Leithauser, who’d take the stage no more than 20 minutes after he’d deliver an entrancing “Harlem River,” embellished again by the incredible winds of Cochemea, this time whistling through the flute.

“It’s great to be here,” said Leithauser, who owns a squelching, volatile vocal style and, at 6-foot-4, acoustic guitar hanging off his shoulder, he has a commanding presence at the mic. “Thanksgiving week — where would you rather be?”

Though he moved to New York City in the 90s, Leithauser’s impressive career stretches back to his days as a local teenager who worked at Inner Ear Studios in Arlington, where he had a hand in bringing a Fugazi album to life.

After fronting The Walkmen as the group’s lead singer for nearly 14 years, an influential indie rock band that also featured his cousin and acclaimed multi-instrumentalist Walter Martin, Leithauser has released a series of solo and collaborative recordings over the better part of a decade that have earned him widespread respect among rock and folk fans.

At 9:30 Club, he spread the set across his catalogue in what felt like a celebration not only to be back on his home turf, but — as Morby suggested — that the tour was completed without catastrophe.

His set began with an intense cover of “Fly Into The Mystery” by The Modern Lovers, a band he said was one of his favorites, and it highlighted his penchant for animating song lyrics with immeasurable magnitude and zeal. And it made a case for how naturally his lush, billowing voice can carry and empower a rock song.

Stream Hamilton Leithauser’s 2020 album The Loves of Your Life via Spotify:

“Sick As A Dog,” from Leithauser’s 2016 outstanding collaboration with Rostam, I Had a Dream That You Were Mine, manifested in live format to a boiling composition that let Hamilton loose the way a voice like his only deserves, and let this band — the same that backed Kevin Morby in the set prior — to find a completely different synchronicity, this one through potent, discharging rock rhythms.

The lead track on The Loves Of Your Life, “The Garbage Men” showcased Leithauser’s current orbit as a songwriter — married, the father of two daughters, a veteran who’s now in his fourth decade as a professional. An ardent spirit evident as he steps to the mic, Leithauser’s words paint him as one-of-a-kind inside and out:

You say, I’ll find a job
That’s right, laughing like you do
Chewing your fingers to the bone
Spitting your nails into the pool

Watch the lyric video for Hamilton Leithauser’s 2020 release “Here They Come” on YouTube:

Two more consecutive from his latest album, “The Stars of Tomorrow” and “Here They Come,” both sophisticated pieces that somehow wrangle his wild vocal tendencies, provided further indication that there’s so much more to come from Leithauser, and that his range is broader than what’s been covered so far.

“The Stars of Tomorrow” was antedated by his hilarious his encounter on a Long Island beach with a divorcee who was moving to Baltimore. “I wrote down everything she told me that night — I’m just reporting what I heard,” he played coy. And it translated to a magical, sweeping ballad, and its harmlessly flippant words showed a Hamilton who was more tactful in various moments, before tipping his head back in an emotive howl:

Oh the island slept
And the moon had set.”

A beam down the highway
Tapping the dash
In a cool fluorescent flash.”

“Here They Come,” now one of his most streamed songs on Spotify, has the makings of a folk-rock classic, a jingle that develops an infectious groove as he speaks from a place of experience, acceptance but unshakable regret as well:

“I was a fool, I was blind
I kept my eyes shut half the time
All the lights, one by one, here they come
Take the hand that’s reaching towards you
Where the shadow stands before you
Arm and arm with a uniform
Gonna swing you, right through the front door.”

Leithauser served up some favorites, including “In A Black Out” and “A 1000 Times,” two more hits from the Rostam team-up, and he’d spend a moment honoring another friend and collaborator, one who’s life ended too soon back in 2018 — the late Richard Swift. Swift played drums and provided background vocals on Leithauser’s 2014 solo premiere, Black Hours, and he later co-produced Morby’s City Music in 2017.

“I’d like to think Dickie is the reason we’re here,” Hamilton said. “He’s how we ended up together on this tour.”

Inviting Morby back to the stage, Hamilton led a four-song finale starting with “Virginia Beach.” With Williamson stepping up to join them, the amassed group next performed Jess’s most popular song, the track “Wind On Tin,” before a rustic, modest take on Leithauser’s “Peaceful Mornings.”

It wasn’t lost on either Morby or Leithauser just how significant the Fall Mixer Tour really was, and who should be applauded for helping hold it together every night.

“Hamilton and I have both played about 30 shows on this tour,” Kevin said to the crowd, finally revealing some of his emotion through plain speak. “If you think about it, that means this band has played about 60 shows.”

“Can’t say enough good things about these people,” Hamilton said. “We lived in this bus for six weeks and no one had any problems. COVID canceled a lot. It didn’t cancel this.”

Leithauser asked that the house lights be brightened so he could see some faces. And with Crutchfield back on the stage, the entire entourage joined together in a delicate and heartening edition of Morby’s “Beautiful Strangers,” a fitting end to not just the evening but the entire tour.

Though few fans need the reminder, this song was released in 2016 as a tribute to the lives lost in a number of high-profile violent incidents, including the death of Baltimore’s Freddie Gray, a tragedy that sparked a wave of protests and riots that will have a lasting impact on the city and its identity. Not the evening’s only song with Charm City reference, this one still resonated as heavy as it did five years ago:

Two artists so obviously different in style and with dissimilar paths, but both overflowing with adoration and creativity, Leithauser and Morby put on a clinic this fall, setting an example for how two established musicians can work together in difficult times to more productively submit their songs and their vision to more listeners.

Here are images of Hamilton Leithauser, Kevin Morby, and the evening’s opening act, Jess Williamson, performing at 9:30 Club in DC on Nov. 23, 2021. All photos copyright and courtesy of Casey Vock. 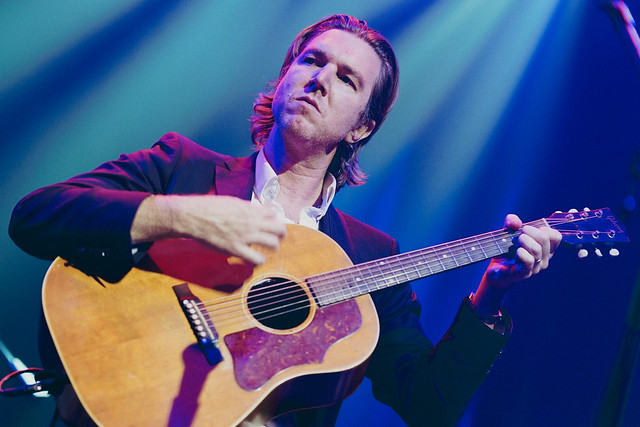 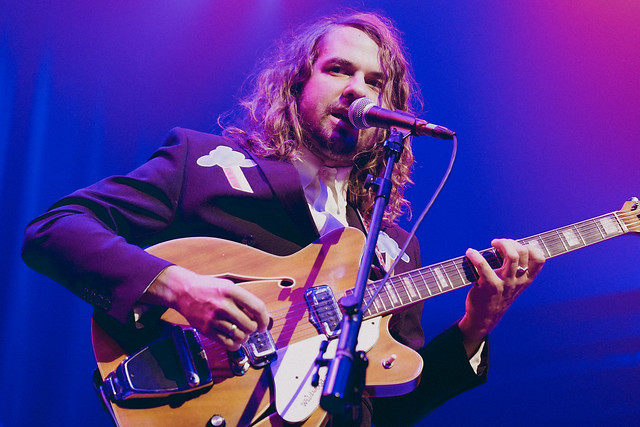 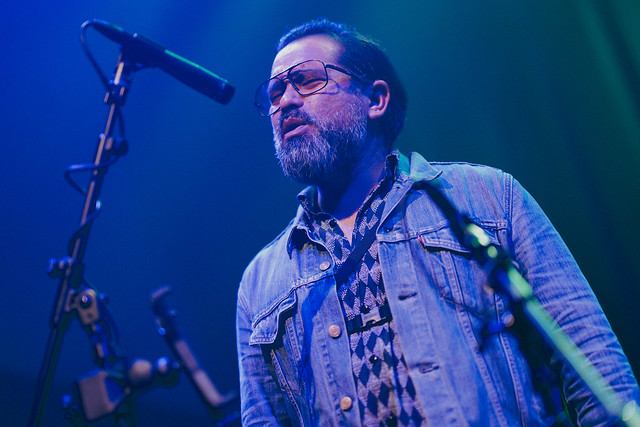 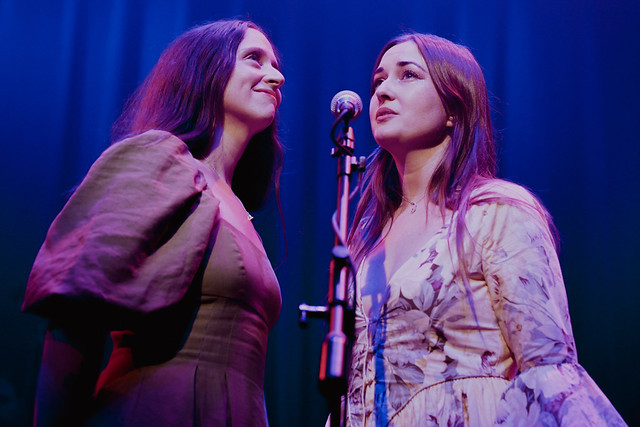 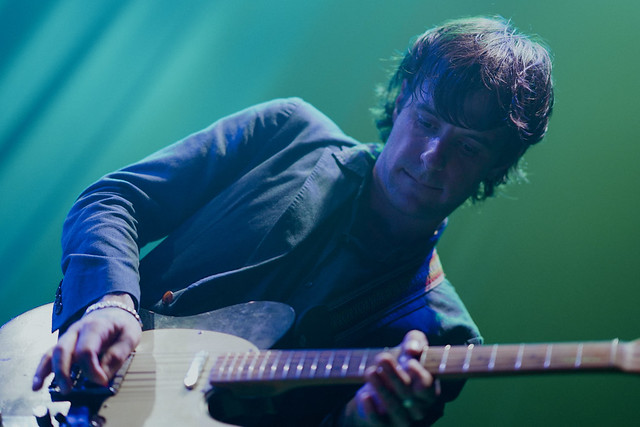 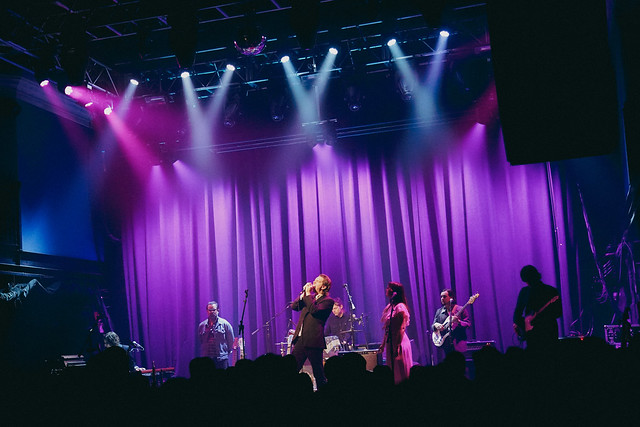 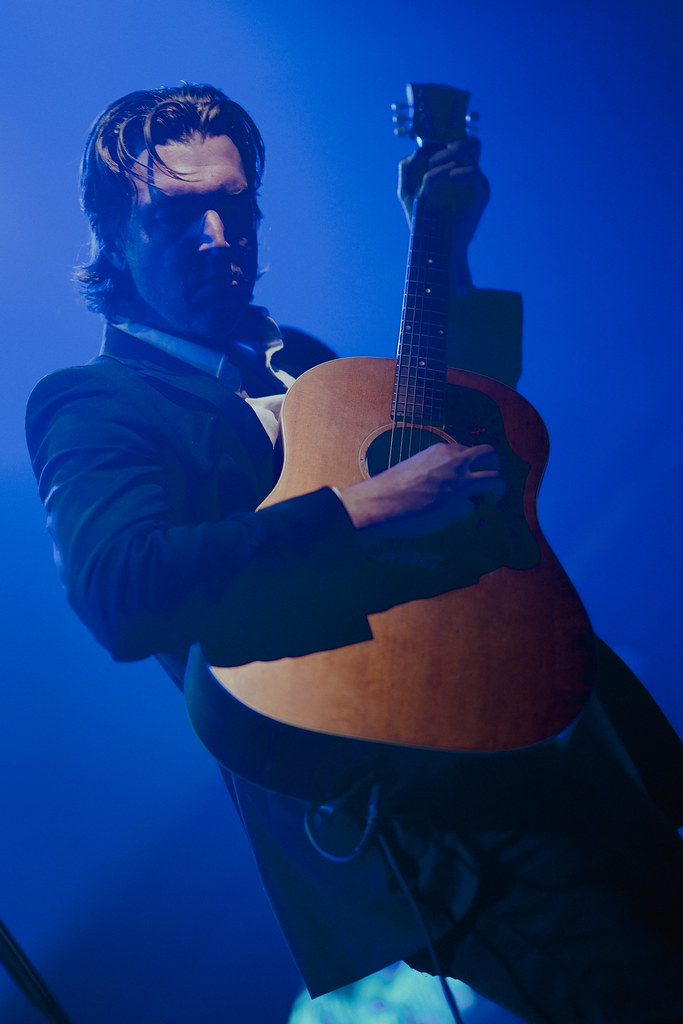 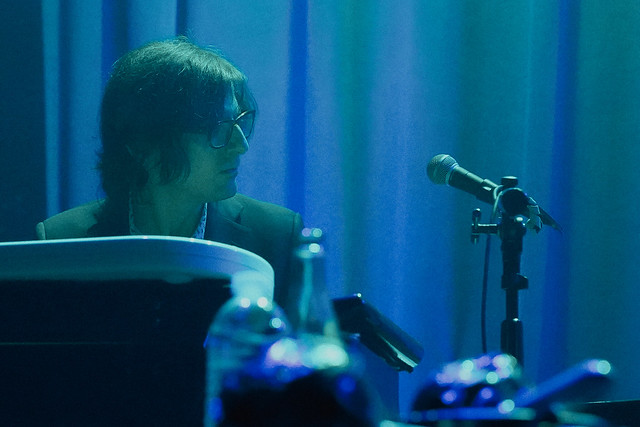 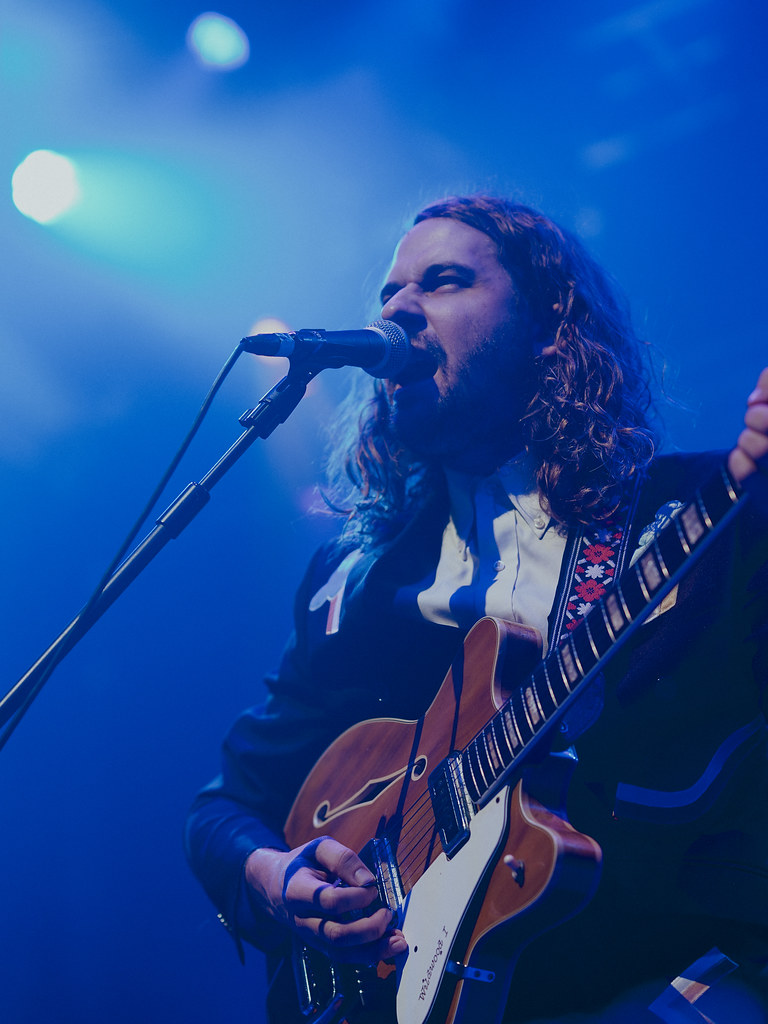 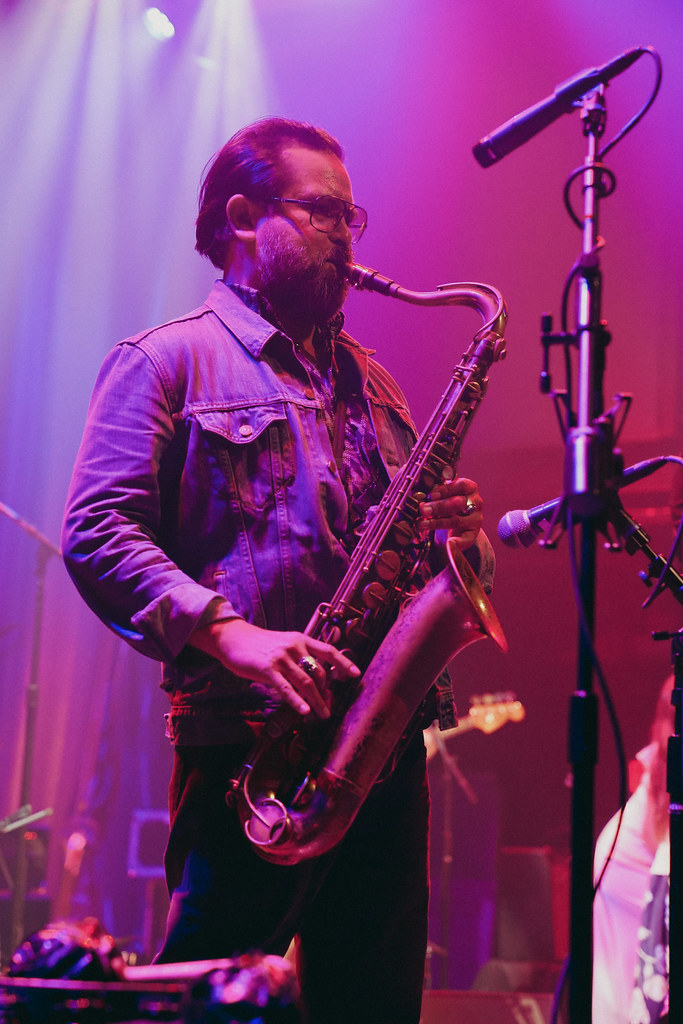 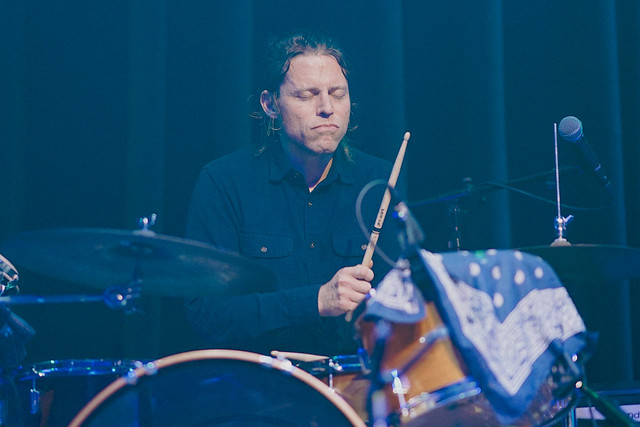 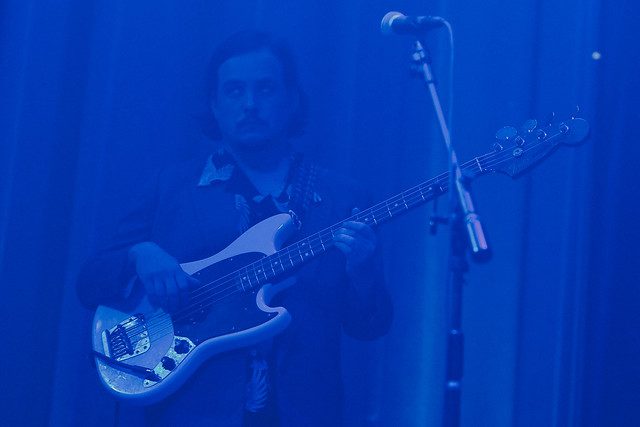 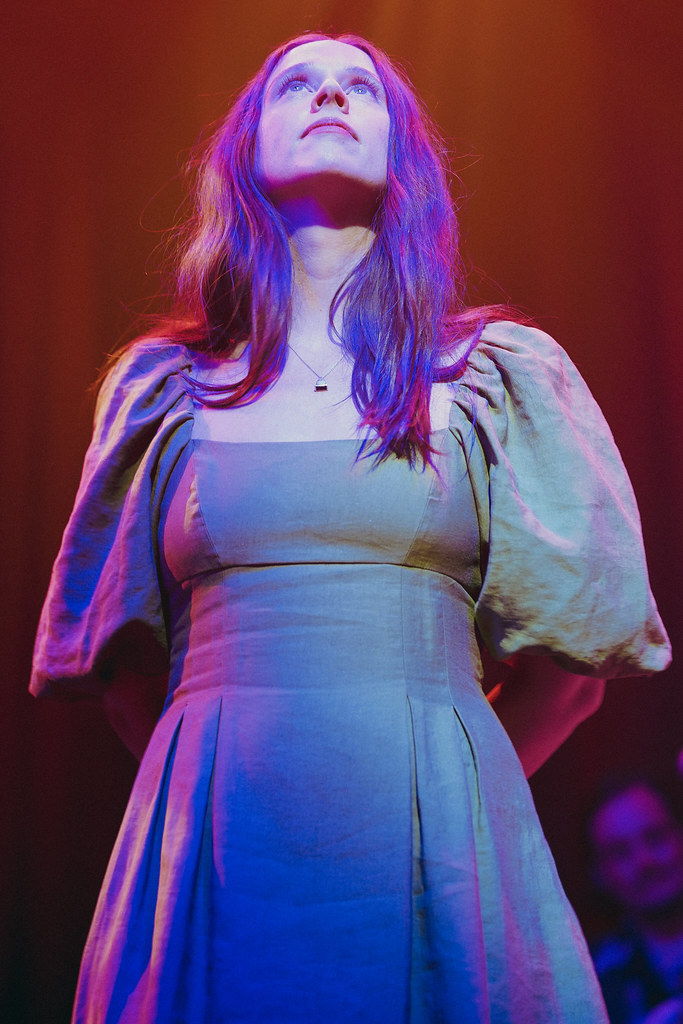 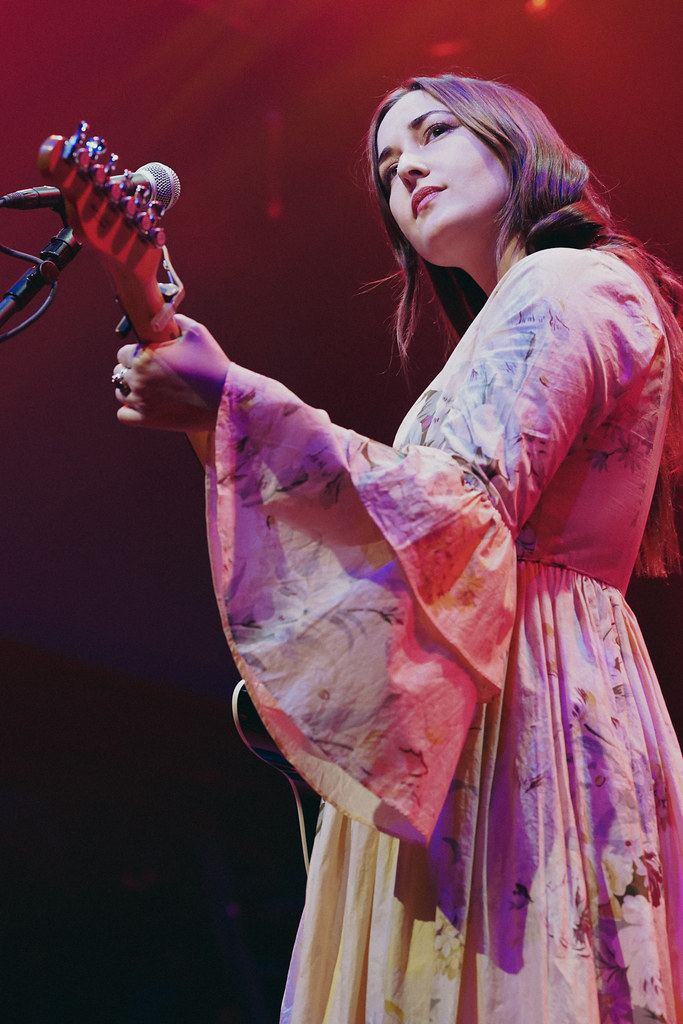 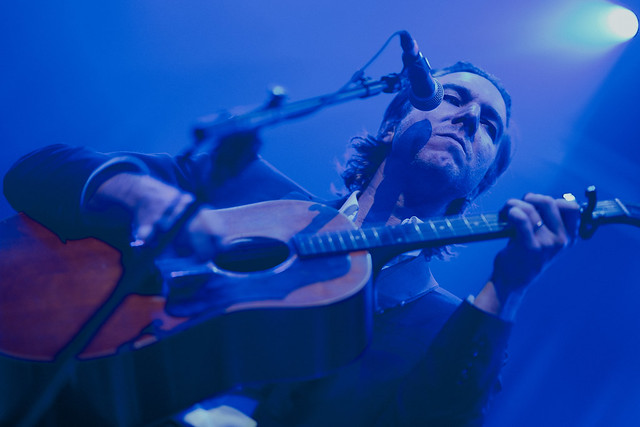 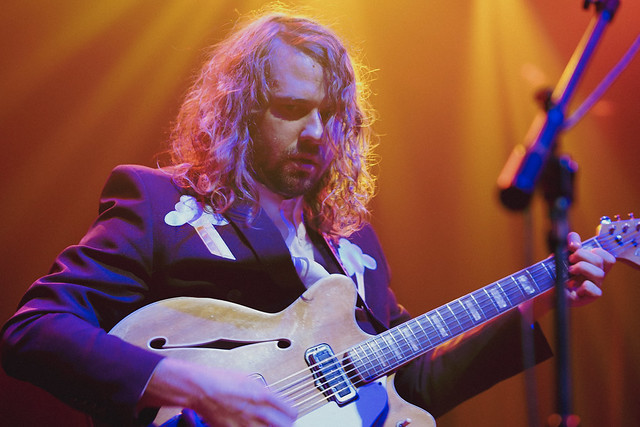 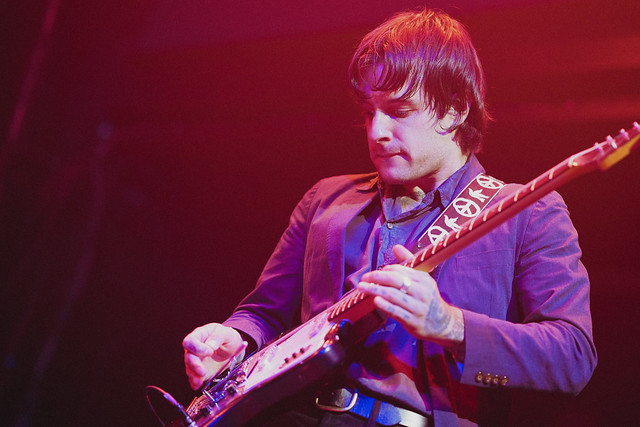 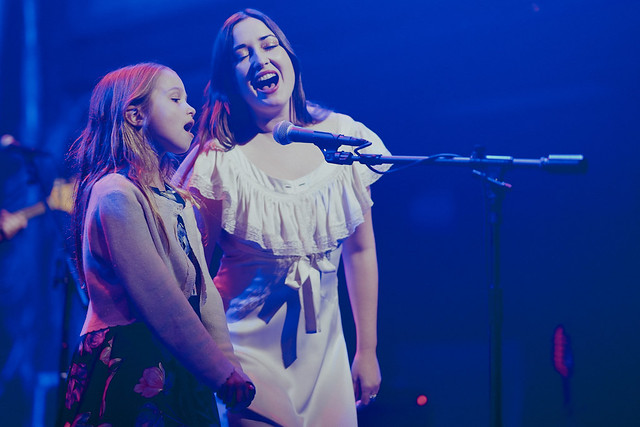 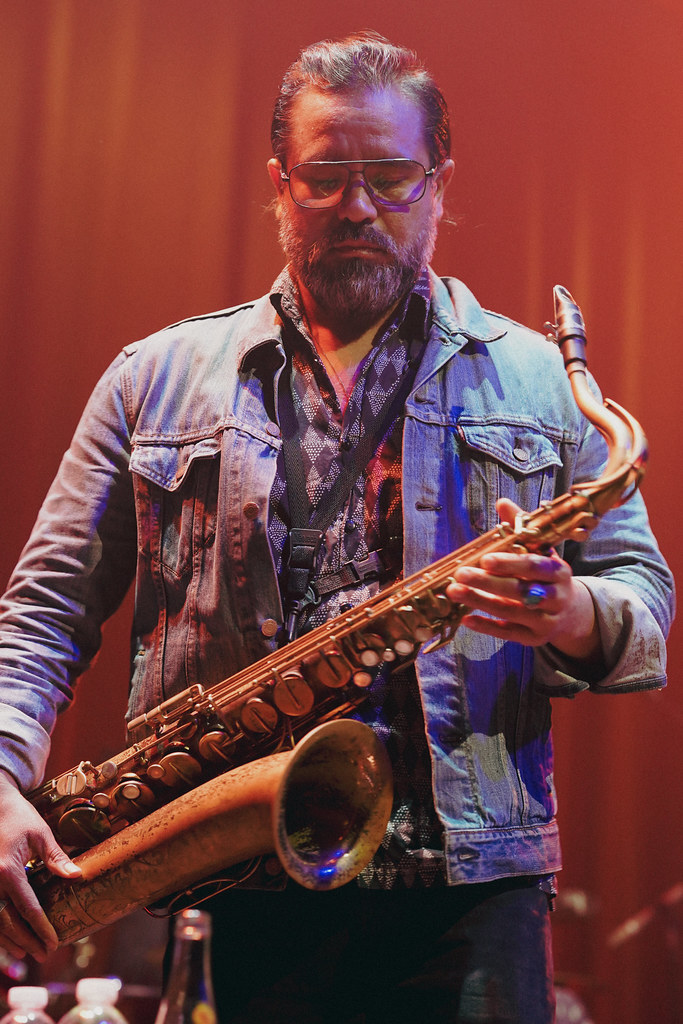 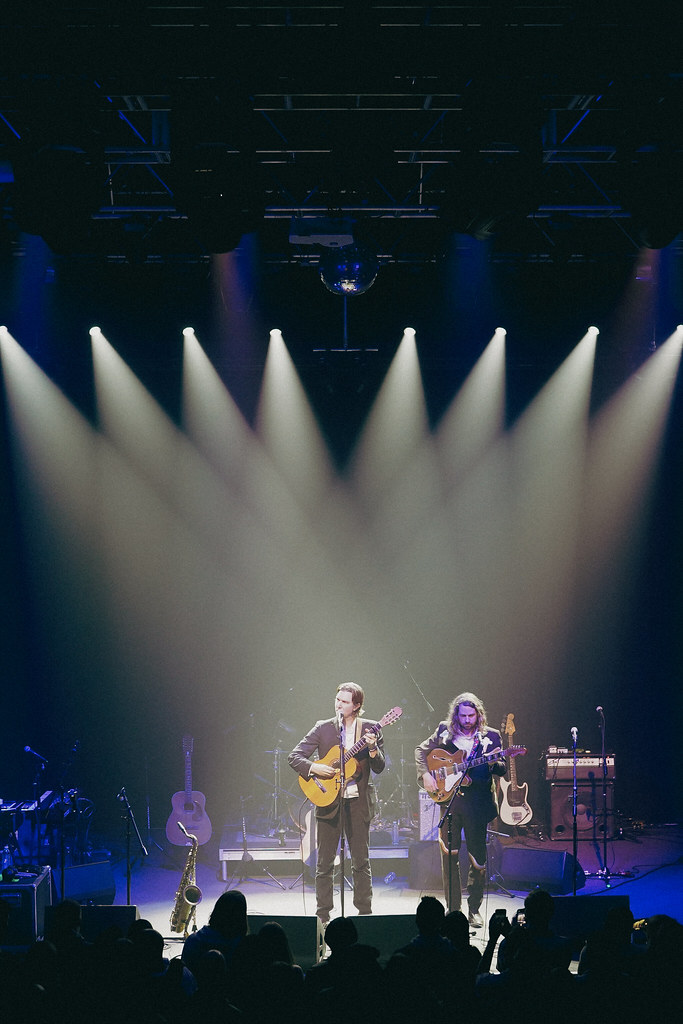 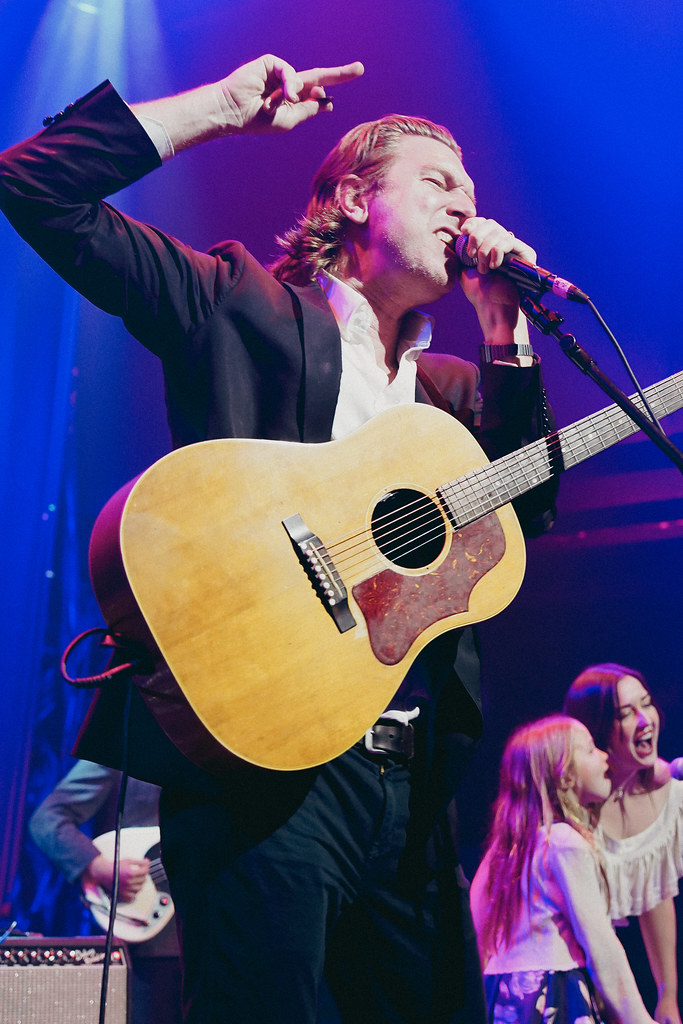 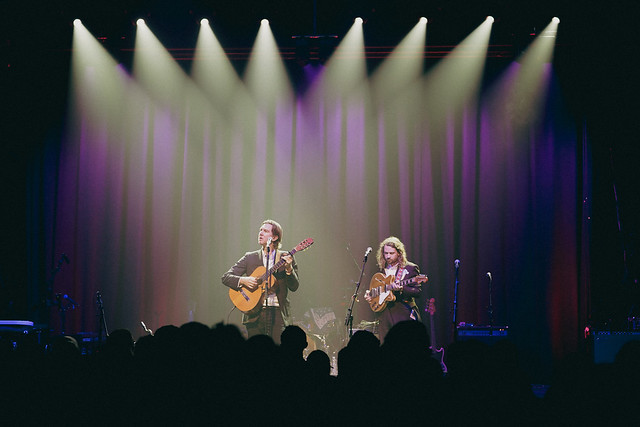 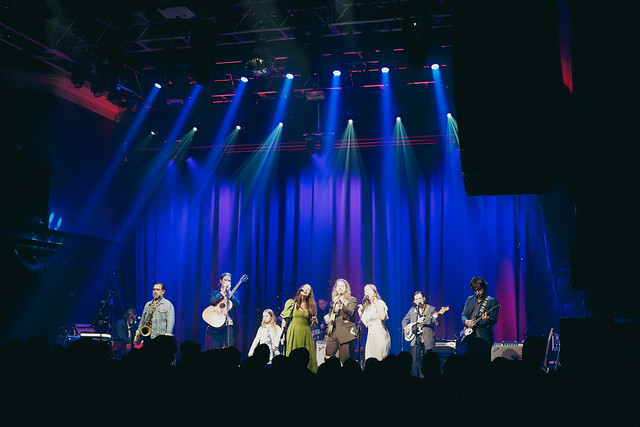