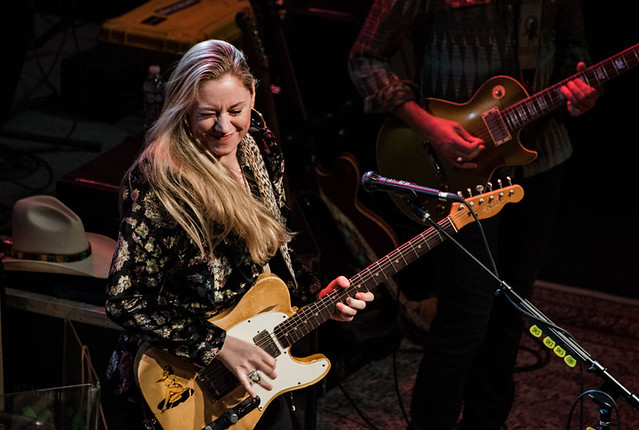 Joanne Shaw Taylor performs at the Allman Family Revival at The Fillmore Silver Spring on Dec. 10, 2021. (Photo by Mark Caicedo)

So, let’s drop all pretense of objectivity: I adore the music of the Allman Brothers Band. The ensemble formed in 1969 by brothers Duane and Gregg took the blues and infused it with rock, soul, and jazz, and invented what would eventually be called “southern rock.” That legendary band enjoyed a career that stretched to 2014, albeit with several personnel changes and multi-year long breaks. Nonetheless, the band were and still are a huge influence on the American musical landscape.

Friday night at The Fillmore Silver Spring, Devon Allman and Duane Betts brought The Allman Betts Band to town to celebrate the Allman Brothers’ music with a who’s who list of guest performers: Eric Gales, G. Love, Robert Randolph, Donavon Frankenreiter, Joanne Shaw Taylor, Alex Orbison, Lilly Hiatt, Lamar Williams Jr., Jimmy Hall, among others. The three plus hour show was much more than a concert, though. For many of us, it was a beautiful reminder of music we grew up with and have cherished for decades.

The Allman Family Revival, so named because it brings together guest artists who knew and performed with Gregg or were influenced and inspired by him, started in 2017 when Devon organized a “Last Waltz” type concert at The Fillmore in San Francisco to honor his late father who had passed away the previous May. In November 2018, the offspring of three of the Allman Brothers Band’s principals (Gregg Allman, Dickey Betts, Barry Oakley) formed The Allman Betts Band and, although dedicated to carving out their own musical path, their live shows included impeccable performances of their fathers’ music. Installing The Allman Betts Band as the Revival’s house band, The Fillmore hosted a sold-out second show that winter. In 2019, the now-annual event expanded to include more guest artists (including Cheap Trick’s Robin Zander, Brandon “Taz” Niederauer, and Samantha Fish), with shows in San Francisco, Denver, and New York City’s Beacon Theatre. In 2020, the global pandemic forced a delay to a February 2021 date, adapting the Revival to a single, socially-distanced performance at Nashville’s Ryman Auditorium.

Stream Bless Your Heart by The Allman Betts Band on Spotify:

“Blue Sky” is a Dickey Betts (Duane’s dad) composition written just before Duane Allman was killed in a motorcycle crash in 1971. The contrast between the song’s optimism and joy paired with what turned out, tragically, to be one of Duane’s final contributions to the Allman Brothers’ music is heartbreaking. But to watch Dickey’s son (and Duane Allman’s namesake) perform it impeccably today brings back the joy the song was meant to celebrate and reaffirms the purpose of the Allman Family Revival: to honor the music, the memories, and the spirit of what connects so many of us together over generations.

The concert continued with a stream of guests making their way to the stage one by one. First up was Lamar Williams, Jr, whose father assumed bass duties after Barry Oakley was killed in a motorcycle crash mere blocks from where Duane had died a year earlier. Lilly Hiatt was next performing a gorgeous duet on “Melissa” with Devon. When blues guitarist extraordinaire Joanne Shaw Taylor hit the stage there was a perceptible bump to the energy level in the room. For those of us not familiar with Ms. Taylor’s guitar playing and singing, one could be forgiven for thinking the late, great SRV had stepped onstage. By this point, it became clear that the guest artists were playing their own songs as well as covering Allman Brothers’ tunes. The juxtaposition worked well as Jimmy Hall (of Wet Willie fame) performed “Keep on Smilin’” and then covered “Statesboro Blues,” a pairing that felt completely natural. The first set ended with Alex Orbison performing on his father Roy’s Traveling Wilbury’s song, “You Got It.”

After a short break, that allowed us to catch our collective breaths, the second set opened with The Allman Betts Band performing a gorgeous “Dreams,” a song written by Gregg and as he says in his 2012 biography, was his entrée into the Allman Brothers Band, “I showed them ‘Dreams,’ and let me tell you, they joined right in. We learned that song the way you hear it today, and I was in, brother.” Continuing with Eric Gales, G. Love, Robert Randolph, and Donavon Frankenreiter, an extended funk/R&B section ensued interrupted by an impromptu birthday celebration for Donovan. The evening finally began to wind down with the Brothers’ classics “Nobody to Run With,” Trouble No More,” and “One Way Out.” As we were approaching the 3-hour mark, everybody made their way back onstage for the rousing closer singalong, “Midnight Rider.”

A tour of this size and scope is a tremendous undertaking (19 cities with dozens of performers, their families, and crew). Devon and his team have done a fantastic job. From what I saw Friday night, the pacing of the show ran like clockwork and every single performance was stellar. There were plenty of smiles and hugs all around. But as I write this, news is coming in that the tour has been postponed due to Covid rearing its ugly head among folks in the touring group. The remaining dates have been rescheduled for February, and although the forced pause is unfortunate, the momentum for this celebration to continue next year won’t soon fade. And when the tour resumes, Devon will be ready, “My favorite part is just the joy of the audience. I can tell they are touched and getting every penny’s worth. Knowing Dad is looking down saying, ‘Damn, son, all that hot jammin’ for me?!’ I know he’s tickled that we celebrate him.”

For news on future dates, and more information on the Allman Betts Band please visit the band’s website.

Here are images of The Allman Family Revival at The Fillmore Silver Spring on Dec. 10, 2021. All photos copyright and courtesy of Mark Caicedo/PuraVida Photography. 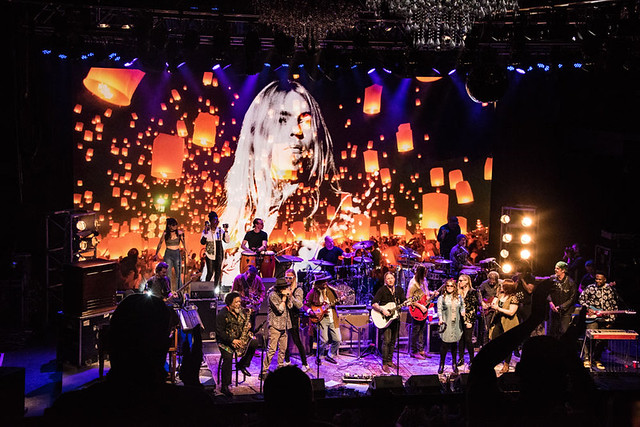 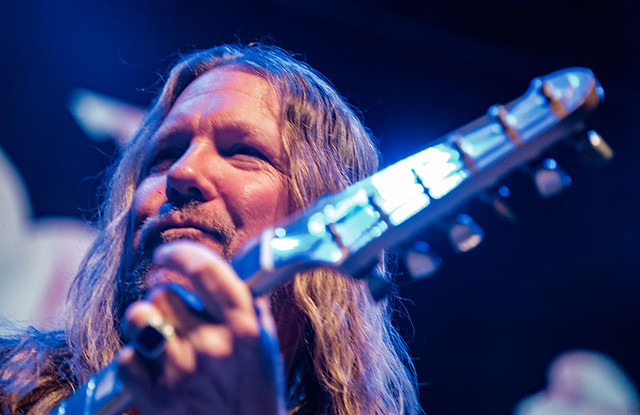 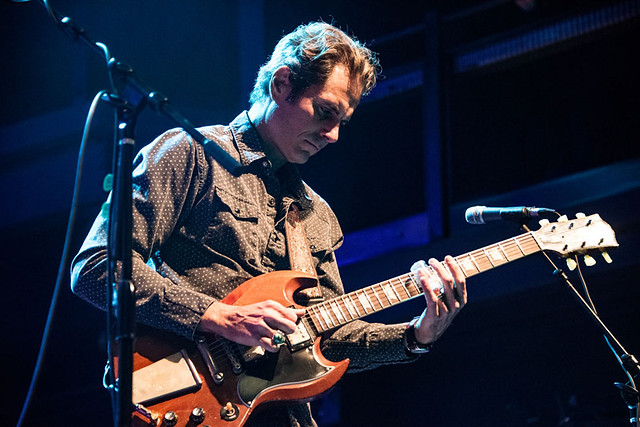 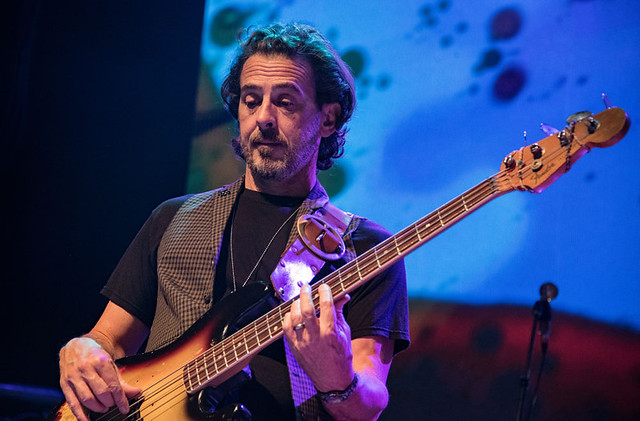 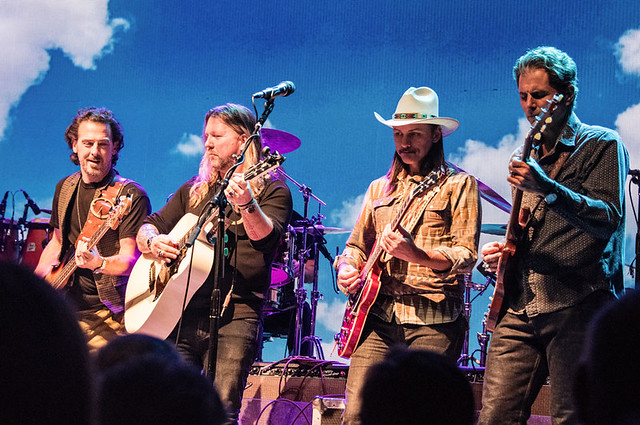 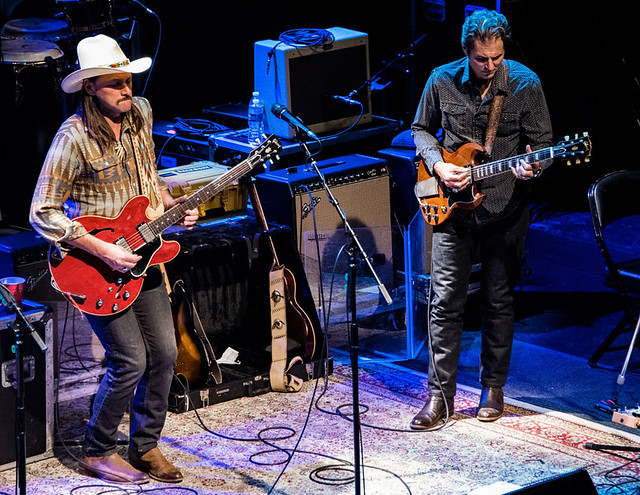 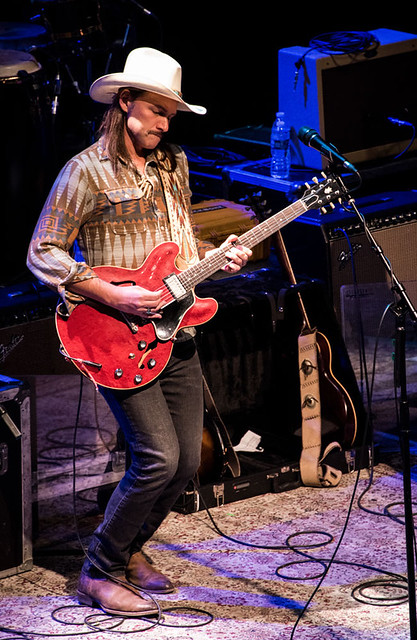 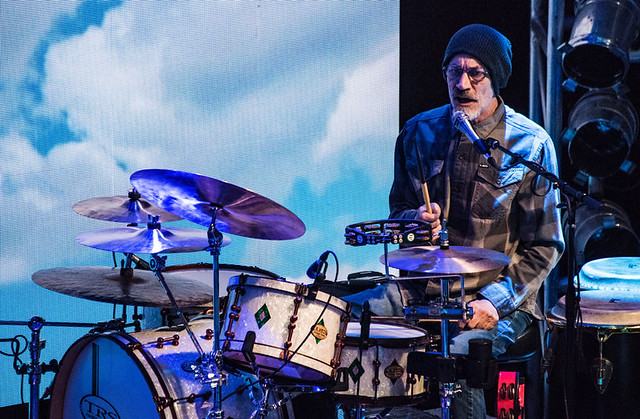 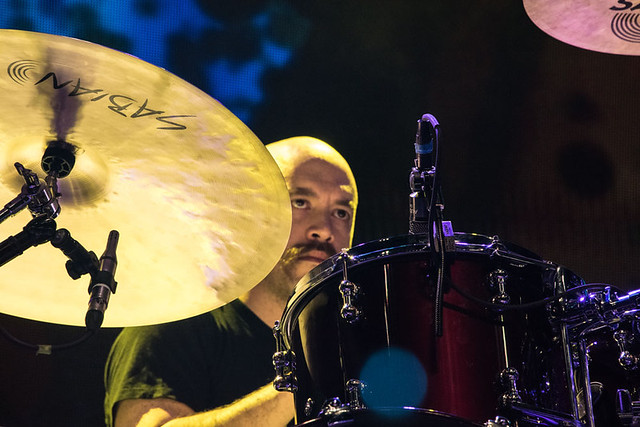 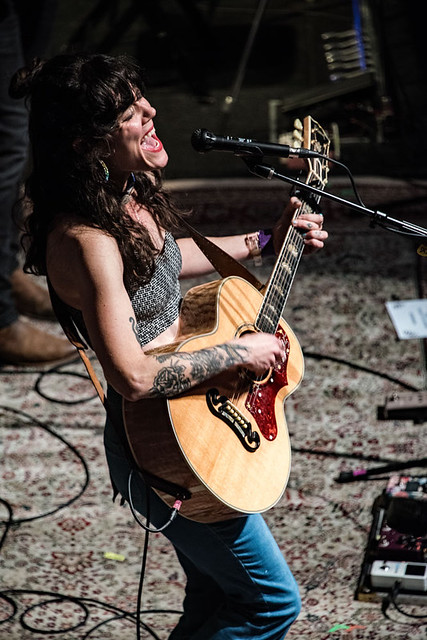 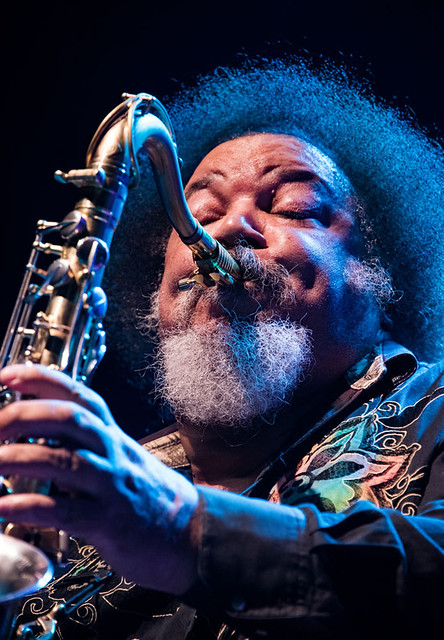 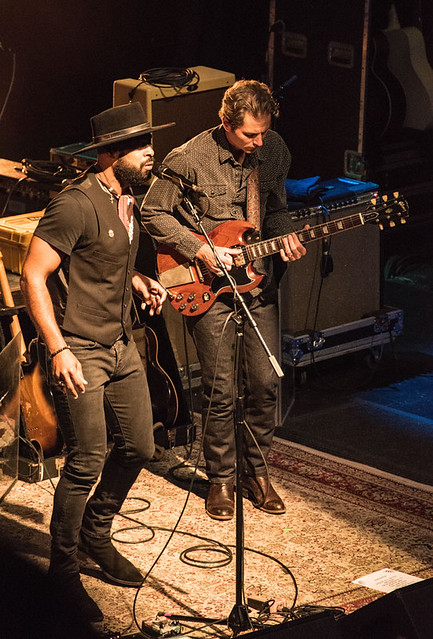 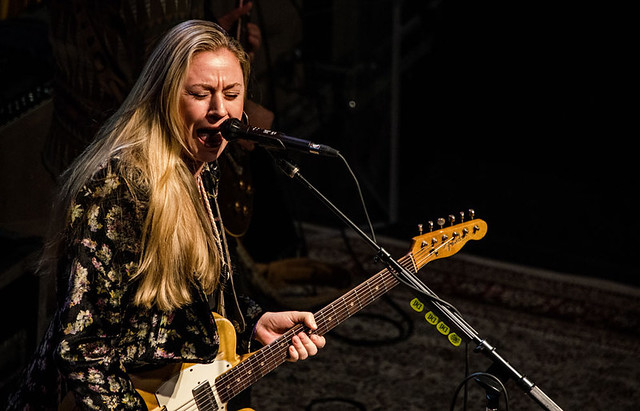 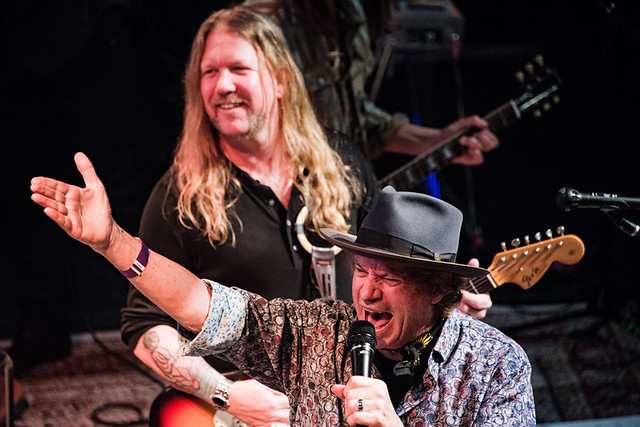 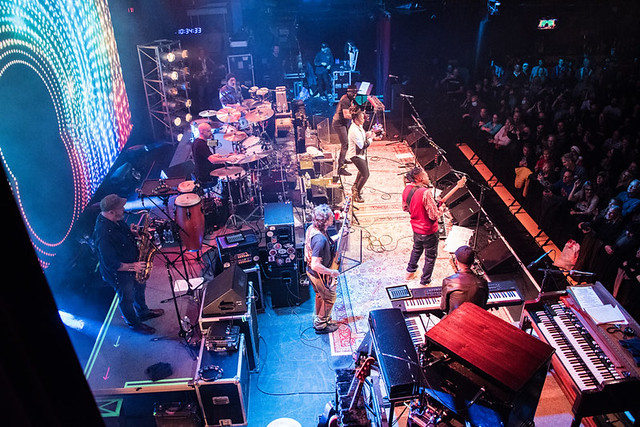 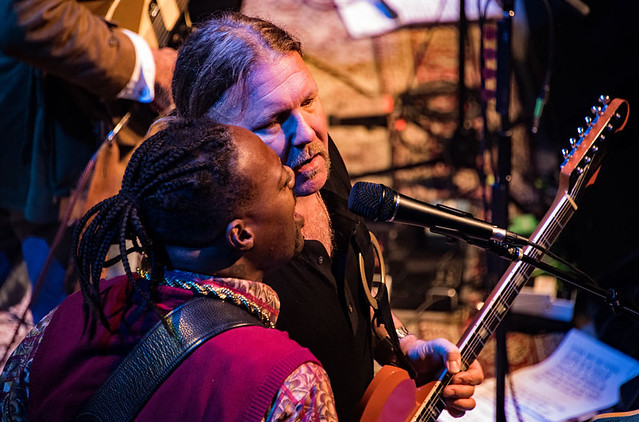 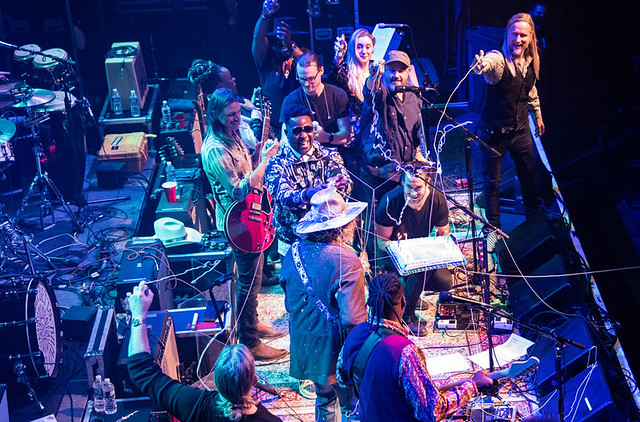 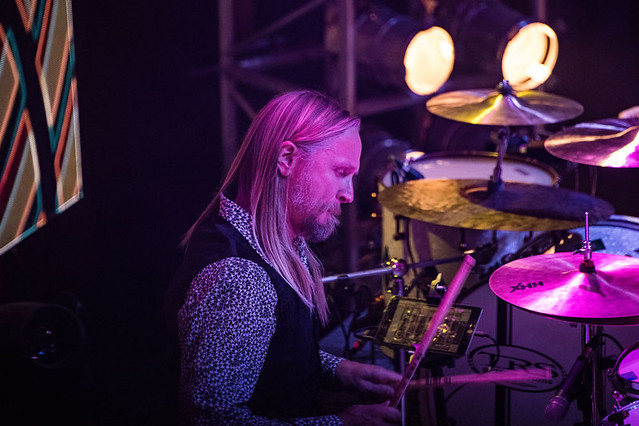 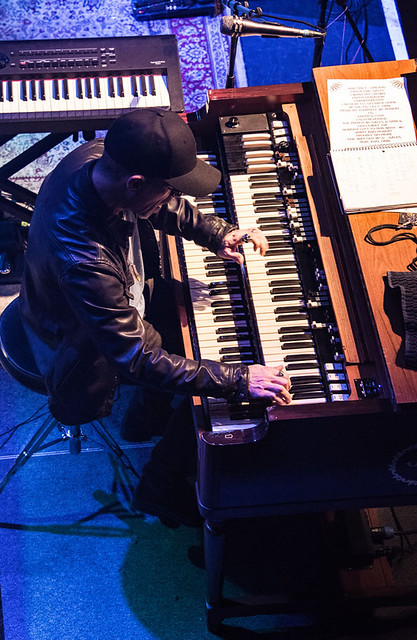 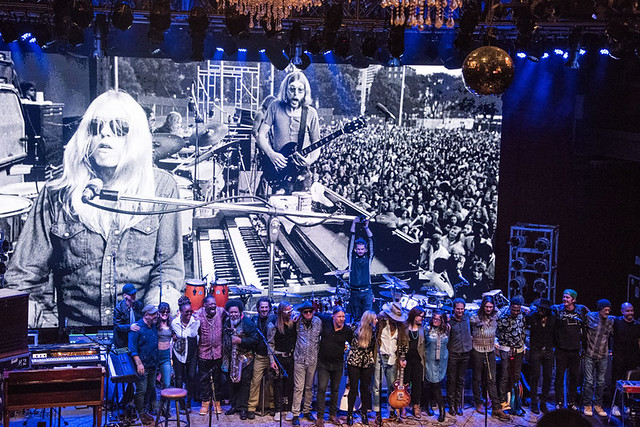