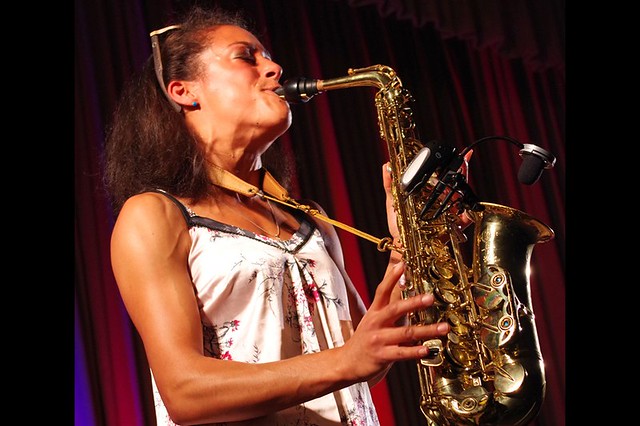 As a seven-time Blues Music Award (BMA) nominee and a two-time BMA Award Winner for Horn Player of the Year (2020 & 2019), Vanessa Collier is excited to kick off her tour in support of her critically acclaimed, self-produced fourth album, 2020 release, Heart on the Line.

In addition to her BMA awards, Vanessa is also a multi- award-winning songwriter, master musician, and multi-instrumentalist, known for seamlessly weaving together funk, soul, rock, and blues styles through soulful vocals, searing saxophone solos, and witty songwriting skills. With her career still in its infancy, Vanessa has already turned many heads, garnering tremendous accolades for her trademark high energy, powerful, fiery, and passionate live shows.

Stream “Heart on the Line” by Vanessa Collier on YouTube:

Vanessa started playing saxophone in the fourth grade and was in every school, all-county, and all-state band possible, while also playing AAU basketball, lettering all four years on her varsity basketball team, and graduating high school with honors. After high school, Vanessa earned a scholarship to attend the prestigious Berklee College of Music, where she graduated with dual degrees in Performance and Music Production and Engineering.

Since graduating from Berklee, Vanessa has toured extensively, both nationally and internationally, and has released three critically acclaimed albums prior to Heart on the Line: 2014’s Heart, Soul & Saxophone; 2017’s Meeting My Shadow; and 2018’s Honey Up. Honey Up spent nine weeks on the Top 15 Billboard Charts, three months on the Living Blues Report, and is currently spinning on Sirius XM radio.

“Vanessa Collier was an absolute stand out at the 2021 New York State Blues Festival grand return to the State fairgrounds this past June,” writes NYSMusic.com in a review last December. “She treated Syracuse’s most intimate venue, the 443 Social Club & Lounge to a blue note-esque performance in early December. Club owner Julie B Leone told NYS Music that it was their fastest show to sell out in under 24 hours.”