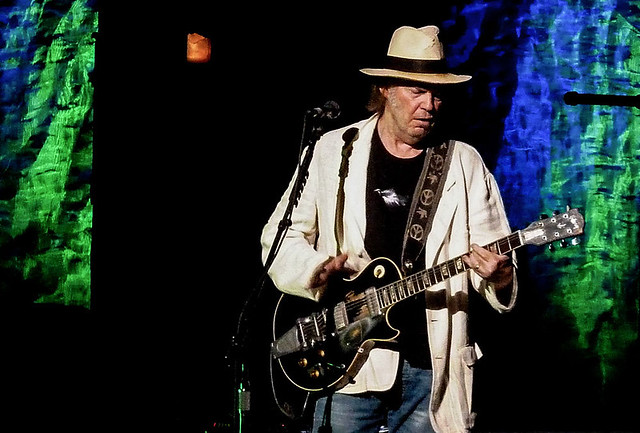 Neil Young has long been a contrarian. His restless relationship with Buffalo Springfield’s other members and management led to repeated band break-ups in the late 1960s. His partnership with Crosby Stills Nash and Young (CSNY) has been an on and off again affair for decades. During the 1974 “reunion” tour Neil traveled from gig to gig on his own bus, eschewing his band mates’ company. The ill-fated 1976 Stills-Young tour ended after only a few dates when Neil left the tour sending a telegram to Stephen Stills that read, “Funny how some things that start spontaneously end that way. Eat a peach, Neil.” If one peruses Neil Young’s Wikipedia page, his tendency to jump abruptly from one project to the next becomes abundantly obvious. Even his newsletter, published on the Neil Young Archives website (neilyoungarchives.com), is named The NYA Times-Contrarian.

This is all to say that Neil follows his muse, his instincts, letting nothing get in his way, no matter what. So, when Neil announced that he would remove his music from the streaming platform, Spotify, my first thought was, “well, good ol’ Neil being Neil again.” He’d done the same thing back in 2015 over the quality of the music Spotify was streaming, claiming that listeners were hearing less than 10% of each recording. But this time is different, with the consequences and implications of Young’s move raising fundamental questions about artistic control, streaming quality, and free speech.

On Monday, Jan. 24, Neil posted a now deleted letter on NYA that read in part, “I want you to let Spotify know immediately TODAY that I want all my music off their platform. They can have [Joe] Rogan or Young. Not both.”

The Joe Rogan Experience, one of Spotify’s most popular at 11 million listeners per episode, has been criticized for spreading COVID-19 misinformation. Young, a polio survivor, understands the importance of disseminating accurate medical information to the public hence charging the platform “has a responsibility to mitigate the spread of misinformation on its platform.”

Neil continued a couple days later on NYA, “… Most of the listeners hearing the unfactual, misleading and false COVID information on SPOTIFY are 24 years old, impressionable and easy to swing to the wrong side of the truth. These young people believe SPOTIFY would never present grossly unfactual information. They unfortunately are wrong. I knew I had to try to point that out.”

By Wednesday, Spotify confirmed Young’s actions saying that the company “regret[s] Neil’s decision to remove his music” from the streaming service: “We want all the world’s music and audio content to be available to Spotify users. With that comes great responsibility in balancing both safety for listeners and freedom for creators. We have detailed content policies in place and we’ve removed over 20,000 podcast episodes related to COVID since the start of the pandemic. We regret Neil’s decision to remove his music from Spotify, but hope to welcome him back soon.”

As of this writing, in the few days that followed Spotify’s announcement, other artists have joined with Neil and also pulled their music from the streaming platform, with rumors of others to follow. The story made the front pages of the New York Times and Washington Post amid reports that Spotify had lost $2 billion in market value. Despite a modest rise in relevant stock indexes, between Jan. 26 and 28, the platform’s share price reportedly dropped by 6 percent. On Jan. 27, Spotify stock hit a 19-month low.

Watch an official music video for “Rockin’ in the Free World” by Neil Young on YouTube:

In a 10-minute Instagram video post, Joe Rogan responded to Young’s objections, saying his show has grown “out of control” and pledged to be more balanced and informed about controversial topics and guests. “If I pissed you off, I’m sorry,” referring to the growing backlash against him and Spotify while thanking the streaming platform for its support. Rogan also added that he’s a huge Neil Young fan.

Over the weekend, Spotify made public its policies (although it didn’t alter them) and created a Covid-19 information hub. “We haven’t been transparent around the policies that guide our content more broadly,” said Chief Executive Daniel Ek in a blog post Sunday. “It’s become clear to me that we have an obligation to do more to provide balance and access to widely accepted information from the medical and scientific communities guiding us through this unprecedented time.”

Author, analyst, and critic Bob Lefsetz writes about the American music industry and his recent take on the Young/Rogan brouhaha says it points to a much bigger issue. Spotify’s gamble that music streaming was how artists and listeners would want their music delivered, even before they knew it, has paid off spectacularly. But because Spotify still doesn’t stream in HD/Lossless it has an image problem among audiophiles. And because music doesn’t necessarily scale to a larger audience the platform has financial issues, too.

The solution then was to go into podcasting and other content distribution. Spotify’s exclusive 2020 deal with Rogan is reportedly worth more than $100 million, and when you lay out that kind of cash and it results in a massive audience share increase, chances are you won’t fire your number one earner. Lefsetz continues: “But Neil doubled-down [by removing his music]. Doesn’t hurt Neil, he makes more money from one show than he does in a year of Spotify streams. [ed. Young had 6 million monthly Spotify listeners]. And his fans are diehards, not casual, they approve of everything he does, and it’s not like Spotify is the only place you can hear his music…This was the essence of the power of the musician when Neil Young broke through. It was us versus them. We stood up for what was right, and they squirmed. They were the establishment, we were the future. And Joe Rogan could try and be responsible, state the truth whenever one of these bozos speaks falsehoods. But that’s not what he does, like Spotify he’s hands off, saying it’s not his responsibility, when in truth he agrees with them when it comes to the vaccine. Just like Spotify is endorsing anti-vaxxers by standing up for Joe instead of Neil. You’ve got to take responsibility.”

In the past week the online chatter (Facebook, Twitter, etc.) has been intense with fierce debate over who’s in the right. Predictably, much of the argument devolves involves into partisans hurling insults at one another. A careful look into the issue, however, can reveal insights into artistic control, streaming quality, and the way information is disseminated (and attempts to regulate its accuracy). I haven’t seen any figures on the number of listeners leaving Spotify (in support of Neil’s stance) or signing up (to hear what Rogan is saying) but the movement in the streaming market is, undoubtedly, real.

Neil Young, intentionally or not, has hit upon a new type of political and economic pressure artists can bring to bear on corporate sponsors, whether they be recording labels or streaming platforms. As of this writing Nils Lofgren, Joni Mitchel, Graham Nash, and Brené Brown (with rumors of other big-name acts) have severed their relationships with Spotify. Those online conversations throw around words like “censorship,” and “cancel culture” rather liberally but when an artist attempts to take control of her/his body of work are those cultural buzzwords really appropriate?

Watch an official music video for “Harvest Moon” by Neil Young on YouTube:

Although Spotify’s initial losses were in the billions, time will tell if there are any observable long-term effects on the streaming giant. Certainly, the financial hit to legendary artists who quit Spotify will be minimal as they (and most artists) rarely make the bulk of their incomes from streaming, anyway. But one would be right to suspect that economics will ultimately control the Young-Rogan skirmish.

For the meantime, Rogan stays and Neil goes. Will Spotify’s support of Rogan, and presumably, the dissemination of misinformation, result in a long-term hit to its reputation? At the very least, other streaming services are welcoming new customers and reaping the benefits of additional exposure as alternatives to Spotify. For those alternatives, not being beholden to a cash cow who also happens to be a controversial figure also helps. But other questions remain: what of new bands who rely on streaming giants like Spotify to distribute their music and help build an audience? They can ill afford to give up the income, however meager, by leaving Spotify.

Neil Young has long been a champion of social causes; he’s played hundreds of benefit concerts from Farm Aid to the Bridge School Benefits and one-off shows in support of environmental, indigenous, and public health/medical causes, among others. The man who wrote that “just singing a song won’t change the world,” has nonetheless gotten the ball rolling with tunes like “Ohio,” “Mother Earth (Natural Anthem),” and “Homegrown,” (Farm Aid’s unofficial anthem). His moral authority derives from a half century of exquisite songwriting, a belief in the truth of medical science (vaccines saved his life, after all), and a singular focus on ensuring his records-indeed, all recorded music-be reproduced at the highest possible quality. Hence, his determination and willingness to confront Spotify over Rogan’s podcast is admirable but perhaps, quixotic.

While conversations about Spotify’s ethics and practices will likely continue, given its continued hosting of Rogan’s popular podcast, the platform may have more to worry about than that. For years, both major and local artists, have complained about the revenue stream (or lack thereof) Spotify offers the musicians it hosts. Will Young’s action be enough to spur Spotify to examine its low-quality stream, and the money it pays to musicians? Have Young’s actions spurred enough music consumers to switch to other streaming platforms in numbers large enough that Spotify is forced to make changes? Time will tell, but don’t hold your breath…by Monday, Jan. 31, Spotify stock had risen 12 percent, trading at $193/share, to regain the previous week’s initial losses.

Watch the official music video for “Peace Trail” by Neil Young and Promise of The Real on YouTube: