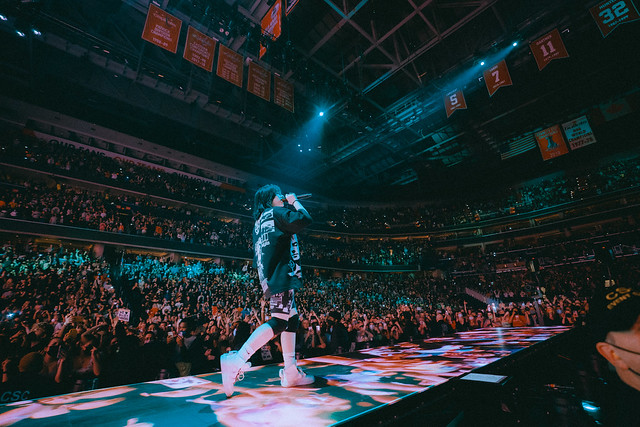 Billie Eilish performs at Capital One Arena on Feb. 9, 2022. (Photos by Matty Vogel)

In the span of just a handful of years, Billie Eilish has gone from selling out clubs, like the Black Cat in 2018, to huge arena shows like her recent Capital One Arena concert. A testament to not only her incredible stage presence but also the songs that connect to her audience on an almost physical level.

Starting the show off with thunderous drums by brother and collaborator, Finneas, and her long-time drummer, Andrew Marshall, until the opening lines of “bury a friend” as the crowd exploded into applause, singing along to every word. And it wasn’t long before Billie danced her way down the long walkway to sing to fans quite literally face-to-face. One thing that I kept coming back to was how no matter how large the crowd gets, Billie Eilish does make it about the fans and the experience of feeling some connection, even in a room that spans an entire city block.

As she transitioned to “NDA,” Billie called out, “Do you wanna sing this part?” as it seemed the entire floor sang, “You couldn’t save me, but you can’t let me go… I can crave you, but you don’t need to know.” And combined with the visuals — smoke, lights, and an illuminated floor that displayed ever changing scenes, from water on “Ocean Eyes” to lightning, moving to the pattern of her feet soon after.

This was a special concert for a number of reasons, both in terms of getting to see live music again — even Billie remarked how long it had been since she’d played DC — but a first for me, personally, sharing the experience with my daughter at her first concert. And what a concert it was! From singing along to “Therefore I Am” with the brilliant (literally so) visuals to the personal way Eilish interacted with the crowd as she implored the audience to “forget about anything going on and have fun!”

It was like an interactive event — something I think I miss at times — and it’s hard to not get involved when you are seeing the spectacle from the eyes of someone who is new to the experience of live music. I hesitate to say something so trite, but it’s true: this made me feel like a kid again. Especially when Billie exclaimed “Alright, guys. Are you ready for something craaaazy? But it’s on you to make it crazy.” And she got everyone to crouch down — and knowing there were a lot of younger fans in the arena let the parents know this meant them too — and when it came time everyone jumped up. You can talk about fan involvement, but this is how you really do it!

Watch the official music video for “Your Power” by Billie Eilish on YouTube:

There were some sweet, quieter moments as Billie, joined by Finneas, both on acoustic guitars performed “Your Power,” which she described as “One of my favorites that we’ve written… I wish I knew a song like this when I was younger.” And there was a moment when Billie asked the crowd to”take a step back, make some room… we’re all gonna take a break from our phones just for this song,” before taking on “When the Party’s Over.” But I think the highlight of the evening was as Billie stood on a crane and was lifted, swinging from one side of the back of the venue around to thousands of lights from the cell phones of fans as she sang a medley of sorts that started with “Ocean Eyes” to “Bored” and ended at the tail end of “Getting Older.”

Billie Eilish not only puts on a great show, but really knows how to make a connection in a place where it would seem impossible to do so — a crowded arena, amidst the lights and smoke and earthshaking sounds. 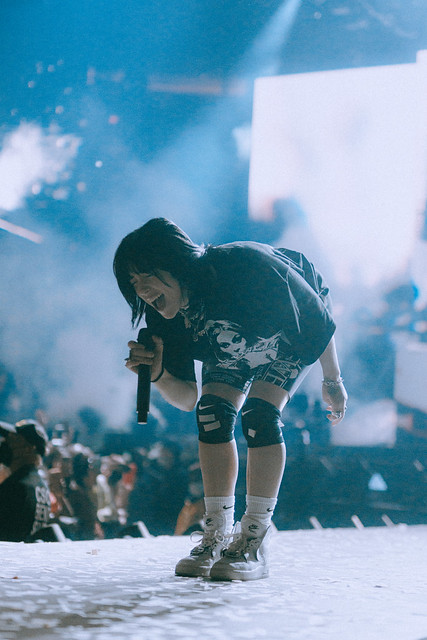