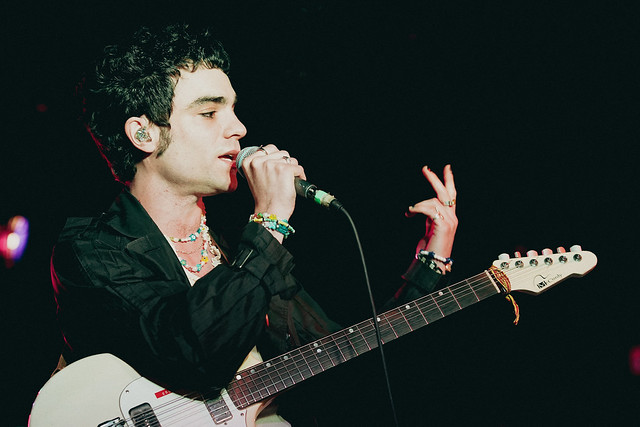 Grabbing listeners’ attention with music in the first place seems a tall enough task — transporting them into your own realm where they can truly absorb the stories and ideas you’re conveying requires a gift for persuasion, charisma, and maybe even a little showmanship to bring it to life on stage.

S. Holden Jaffe, the man behind indie pop-rock outfit Del Water Gap, has an otherworldly ability not just to write deep, enthralling tracks built from a slew of emotions, but to then take those songs and translate them into stunning, unabashed displays of expression in a live, intimate setting. Del Water Gap accomplished exactly that at Black Cat recently.

Jaffe released the first Del Water Gap extended play just shy of a decade ago, and since then the NYU grad has gradually built the catalogue of this rapturing vehicle, cutting several digital EPs and select singles and partnering on projects with a number of respected musicians, including Claud and Maggie Rogers, who was actually in an early iteration of Del Water Gap before finding her solo success.

Staying his course, Holden continued to build relationships, remained diligent and creative in his approach and, perhaps most importantly, honed his individual style as a singer-songwriter, culminating last fall with his first full-length album and a supporting headlining tour, which included a stop at the local All Things Go Festival and other notable appearances.

Shortly after the fall tour the rising indie star announced another one — an ambitious cross-continental run stretching from late January through March, kicking off just a couple days after a hugely valuable appearance on Late Night with Seth Meyers in late January.

The line stretched around the block, down S Street on the frigid night of March 12 as fans waited with anticipation at Black Cat’s doors before Del Water Gap’s recent visit to the nation’s capital. And by the time Holden and his three bandmates took the stage, the venue was as packed as you’d have seen it since pre-pandemic days, fans shouting requests out of the gate, with phones raised, snapping all of it.

Taking the stage in a black trench coat, with a smiley-faced animal caricature in pink neon light behind him, Jaffe would prove his music, however one might try to define it, is riveting, impassioned, supernatural — as much rock as it is pop thanks to Jaffe’s gripping, inconsolable pitch, his burghal style and evasive flamboyance and the potent band that makes up Del Water Gap.

Setting aside his electric guitar, Jaffe — who is signed to Mom+Pop Music and FADER Management — put two hands on the mic for the beginning of “Hurting Kind,” and while he gave flight to its opening lines, to his right, guitarist Nick Cianci gave this song flair and a compounding edge.

“Sorry I Am,” featured Holden on an acoustic guitar, a song that began with a swift, folk-rock presentation but gradually bent with distortion and ultimately saw Cianci push a towering build, throwing it off into the distance to a similar effect on the album version. Here, it became clear how well these songs have been seamed together to feature thoughtful, thrilling instrumentation segmented by Jaffe’s drenched, toiling sometimes guttural lyrics.

“The fuck is going on DC?” Holden smiled, sweat dripping off his cheeks and leaving his fair skin glistening.

Bass player Eric Macias, who would shift back to a keyboard to add a range of rich, moody sound to the production, was intently focused all night, as was Cianci and the band’s drummer, the steadfast Tucker Fleming — and they had to be to keep up with Jaffe, who’d move back and forth to either side of the stage, leaning down to wail lyrics into the mic with cell phones inches from his face and paws latching right onto him.

Speaking of phones, “Let’s Pretend,” a standout from the phone-number titled 2017 EP 1(646) 943 2672, drew an immediate crowd response as Holden spoke the first few lines and the song twirled into another ear-pleasing composition highlighted by the bluesy shifts in his voice and the complicated, but sincere pleas he made.

A celebratory cover of Avril Lavigne’s “Complicated” — 20 years old, this song — preempted a marvelous, climactic “Love Song for Lady Earth” that rode a warm, convivial lyric path into a cascade of crashing, epic guitar solos from both Jaffe and Cianci in a bursting, impressive display.

Showing another degree of sonic dynamism, “Distance” from the loaded studio album expanded to an alt rock sound, with Jaffe jumping, scratching on the electric and howling the lyrics as this track chugged and many joined in to sing along with him.

Later in the set, “High Tops,” a single from the acclaimed 2017 EP, began as a lurking bit but grew to a heart-wrenching slow jam, with Jaffe showcasing the amazing range in his voice while maintaining this helpless, destitute tone, and a perfect layer of keys floated below him. Jaffe’s words here amount to some of the most deliberate and vigorous in any modern love song, with swaying, narrative instrumental punctuation:

“I used to see you on the sidewalk / Standing in your high tops / Ruining your pretty lungs /
With your cigarette smoke / It ain’t keeping you young / Touch me like you know me / Baby when you’re lonely / Kiss me on my open mouth / I’ll throw you a rope / I’ll keep pulling you out.”

“You’ve been fucking awesome,” Holden said to shrieks and screams as he returned to the stage solo for his encore. “This (tour) ends in just two weeks.”

He asked the room to join him in a moment of silence to show respect to the many people in Ukraine who’ve lost their lives or are facing unthinkable horrors as a result of the past month’s events. Still, with fans so blindly consumed by his presence, a couple couldn’t resist to throw out requests.

“Guys,” Jaffe whispered respectfully. “In case you didn’t hear — we’re trying to send some light over to the Ukraine. Okay? Thank you.”

And, finally answering the overwhelming calls for it, Jaffe performed a bold, stripped-down take on “To Philly,” before calling his team back out for an audacious version of his most streamed track, “Ode to a Conversation Stuck in Your Throat,” again showing his command of not just the platform but rather the whole venue with this lustful, reckoning piece of songwriting.

Watch the official music video for Del Water Gap’s 2020 single “Ode to a Conversation Stuck in Your Throat” via the group’s official YouTube channel:

As Cianci, Macias and Fleming sustained an extended jam, Holden had apparently planned for the moment — he looked up, and with both arms, grabbed ahold of a pipe running along the ceiling, shimmying along it about 10 to 12 feet to put himself over the center of the Black Cat audience. He extended an arm down, squeezing the hands of overwhelmed audience members and keeping himself suspended with the other.

Daring, believable, determined, and extremely affecting in both his words and mannerisms, Jaffe made the case with this unforgettable visit to DC that he is one of the most visionary and promising entertainers in the land.

Ode to A Conversation (encore)

Here are images of Del Water Gap performing at Black Cat DC on March 12, 2022. All photos copyright and courtesy of Casey Vock. 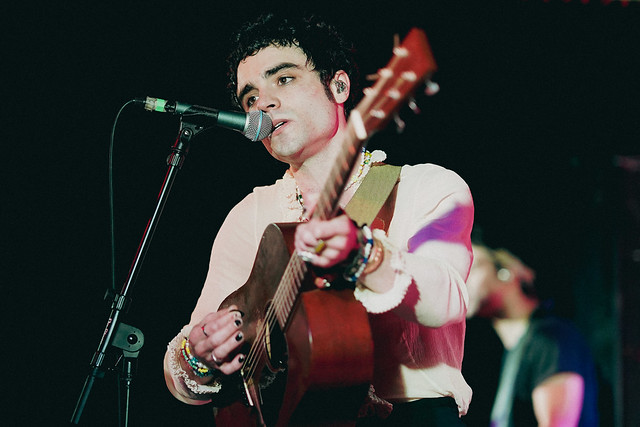 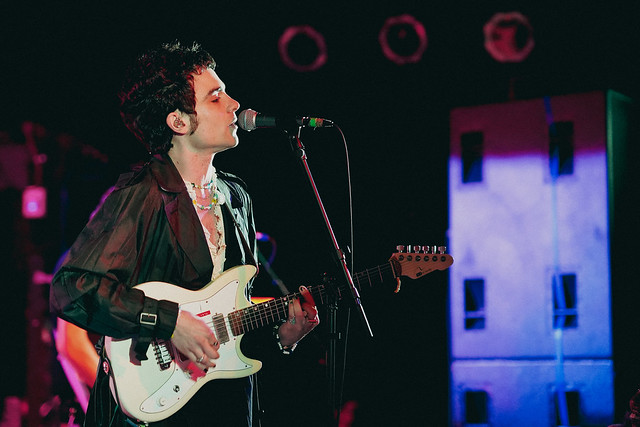 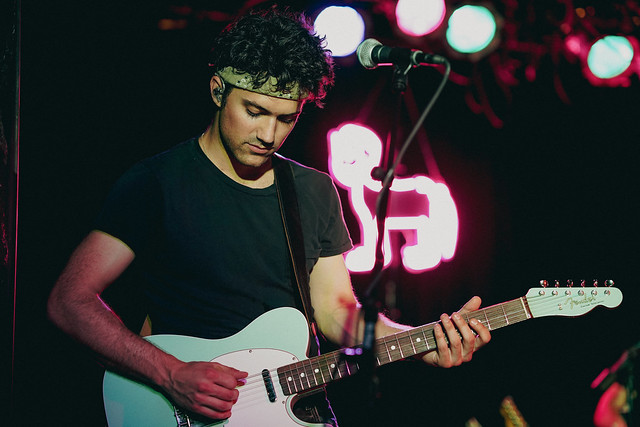 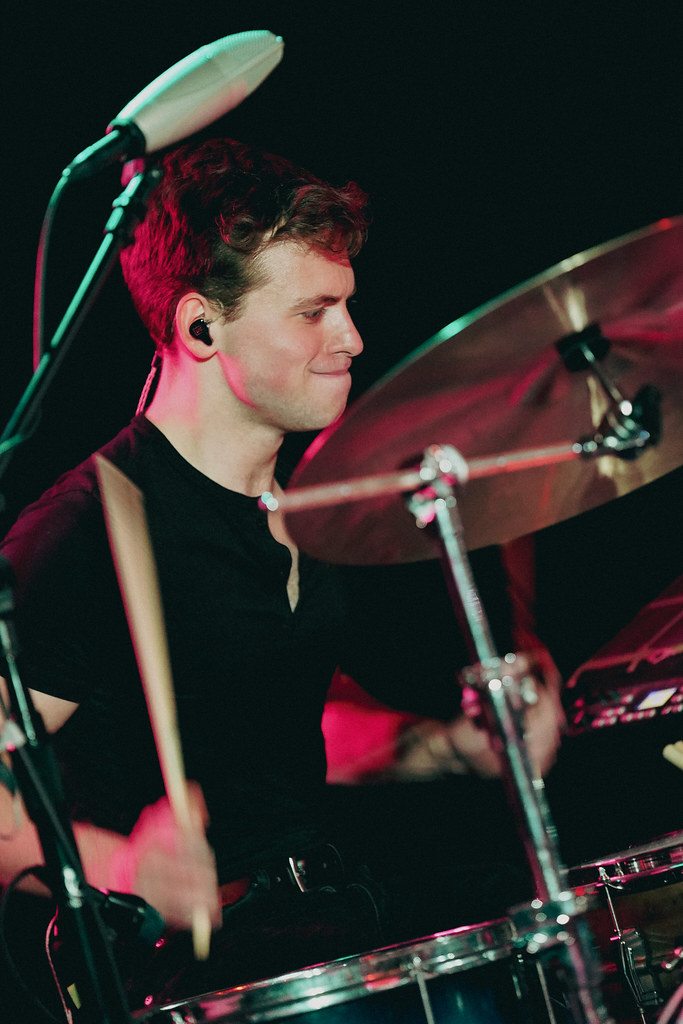 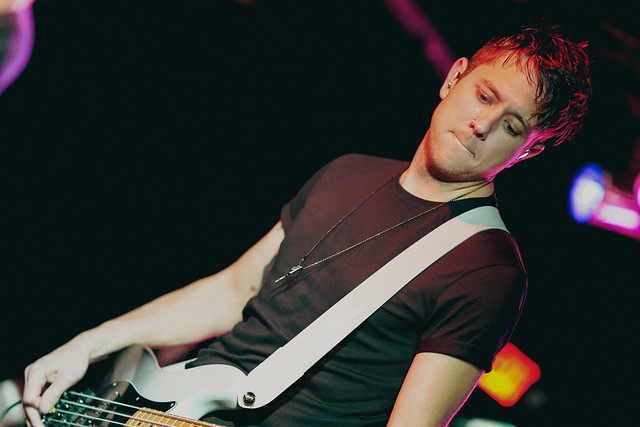 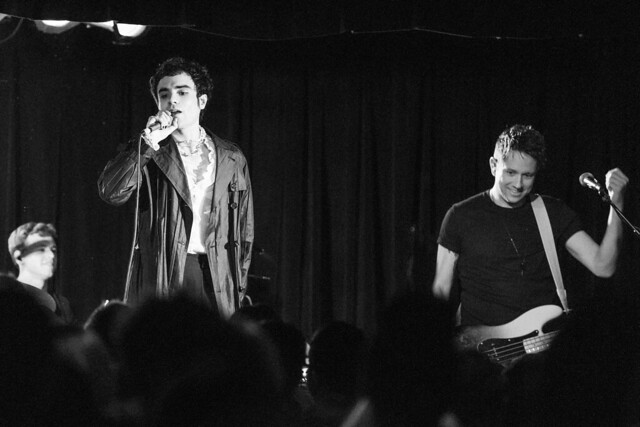 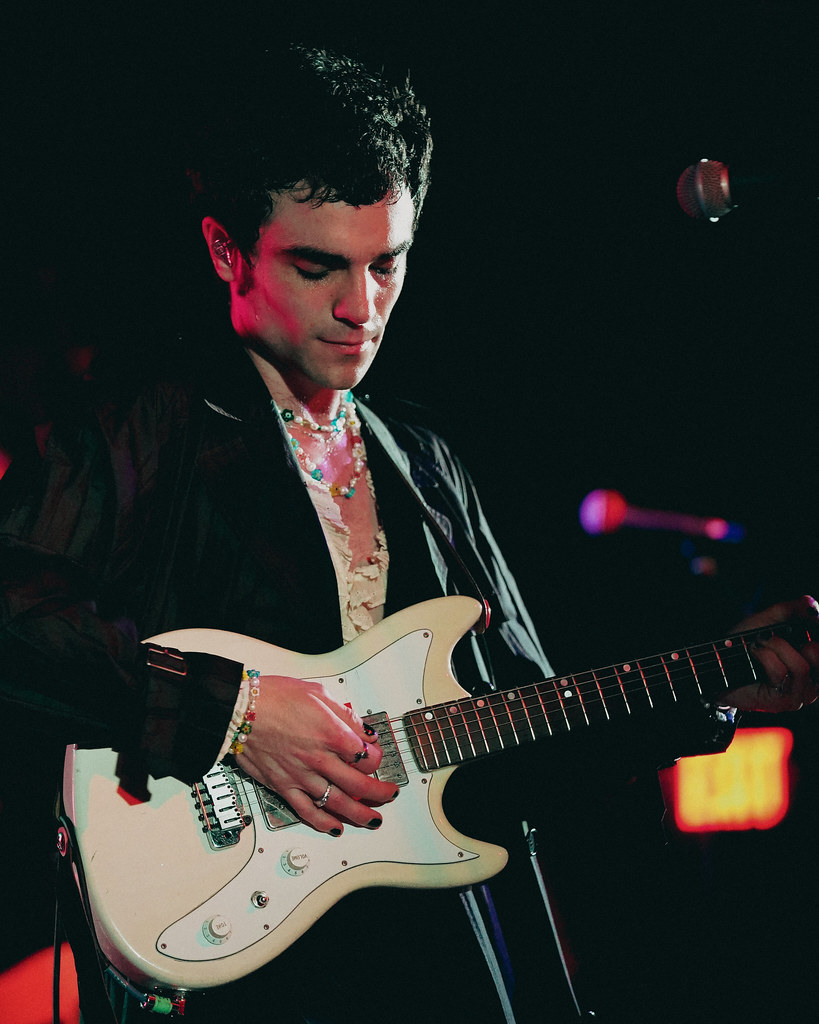 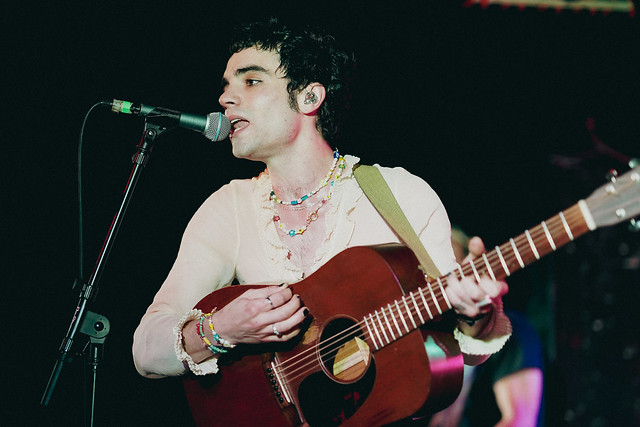 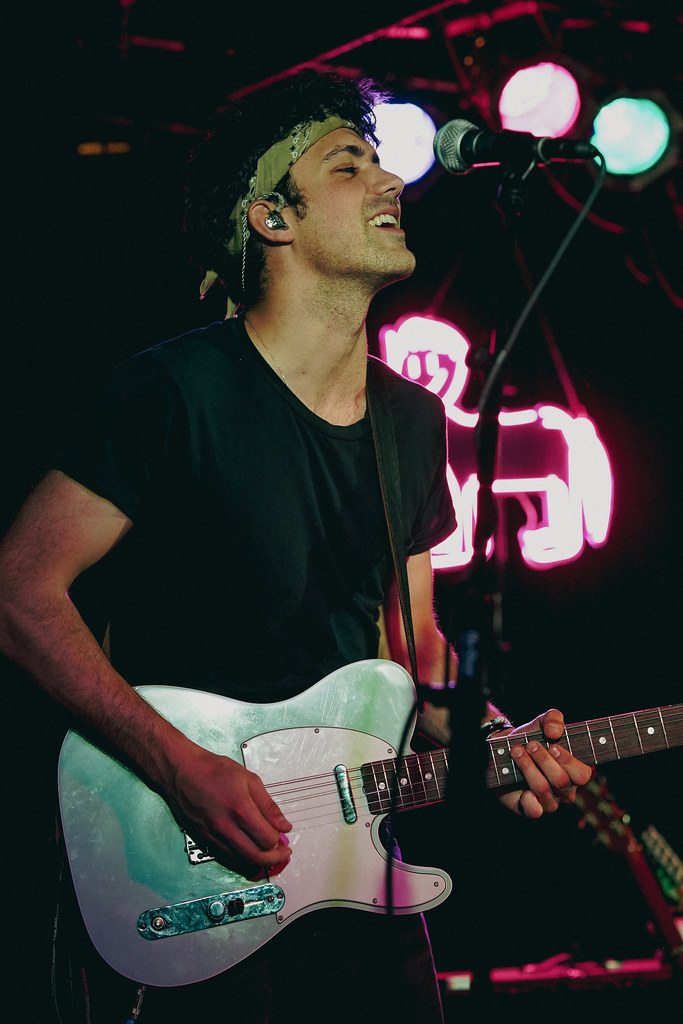 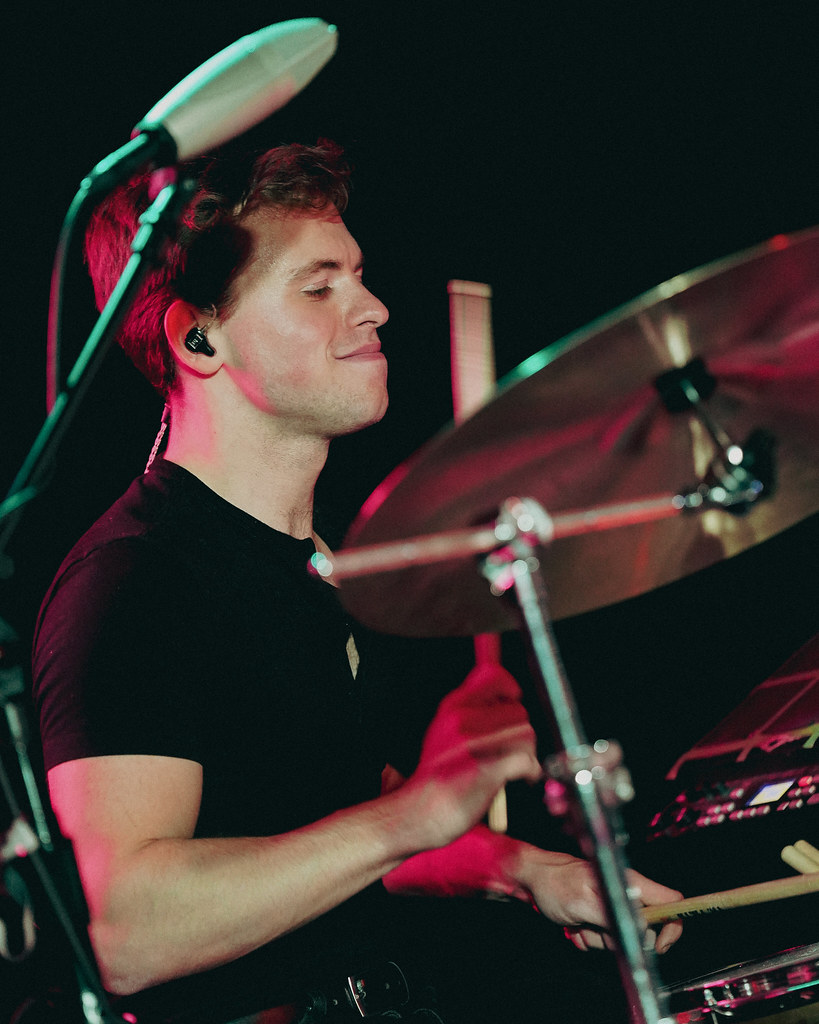 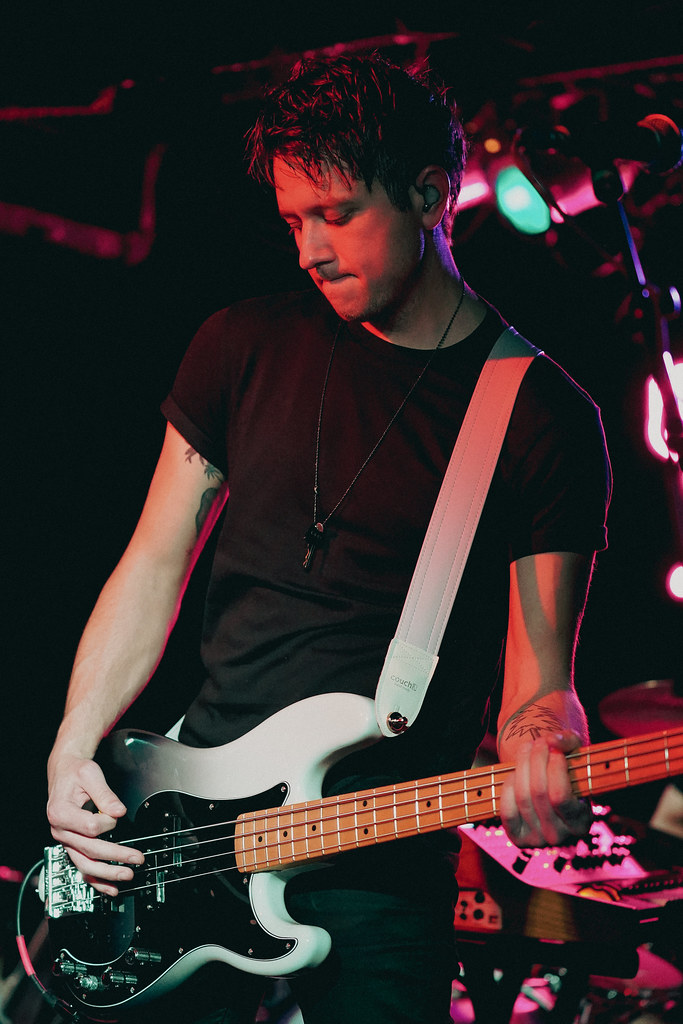 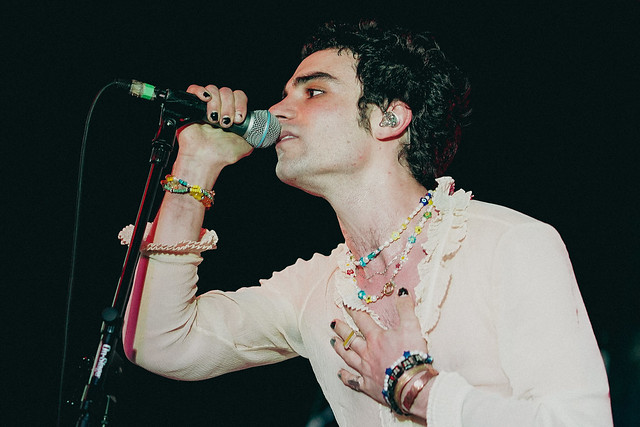 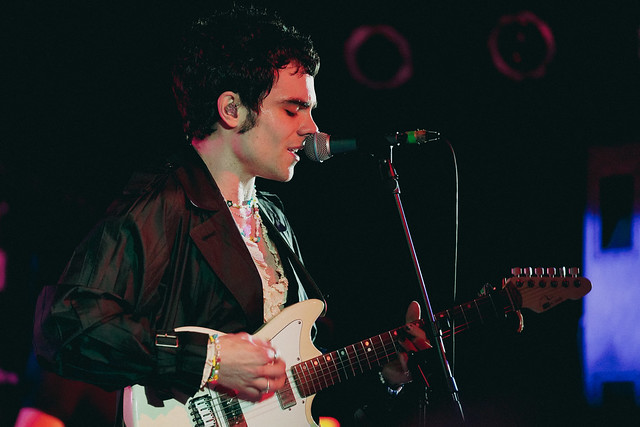 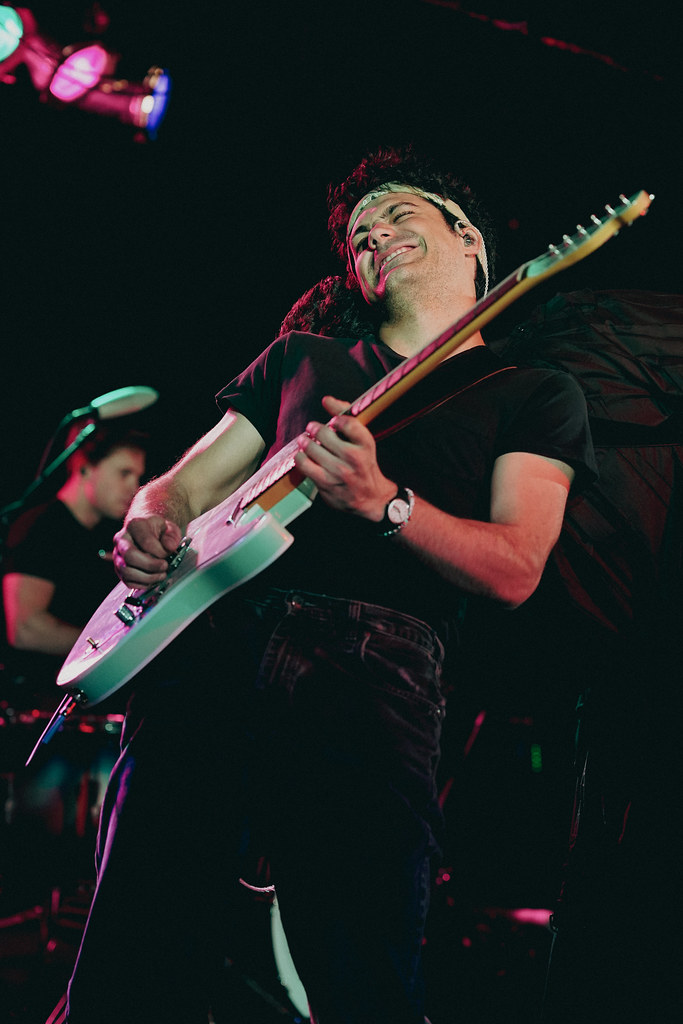 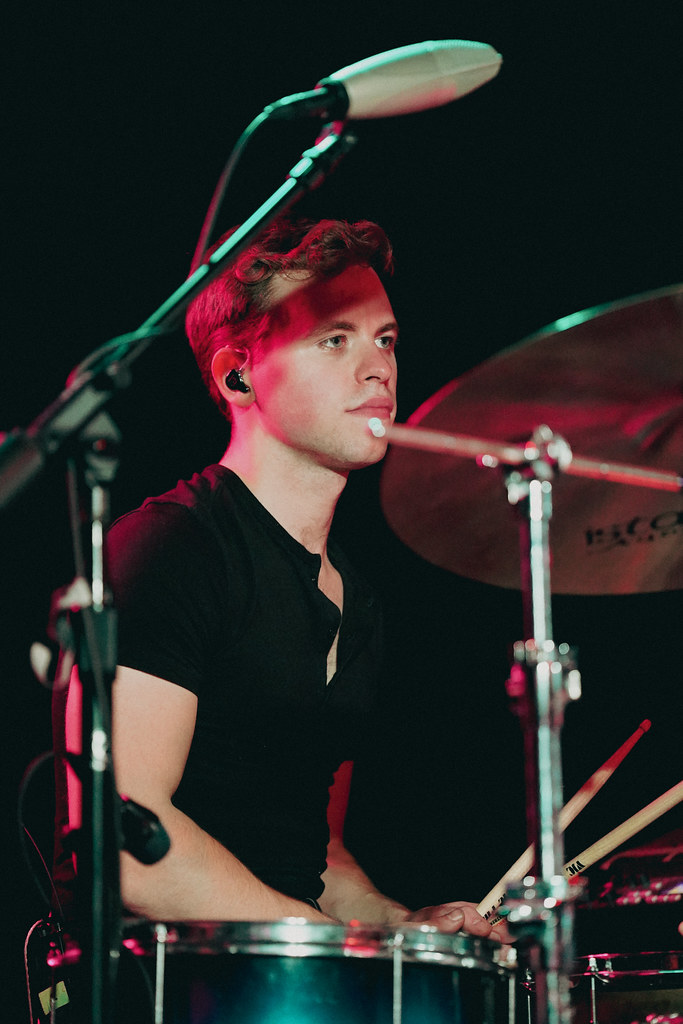 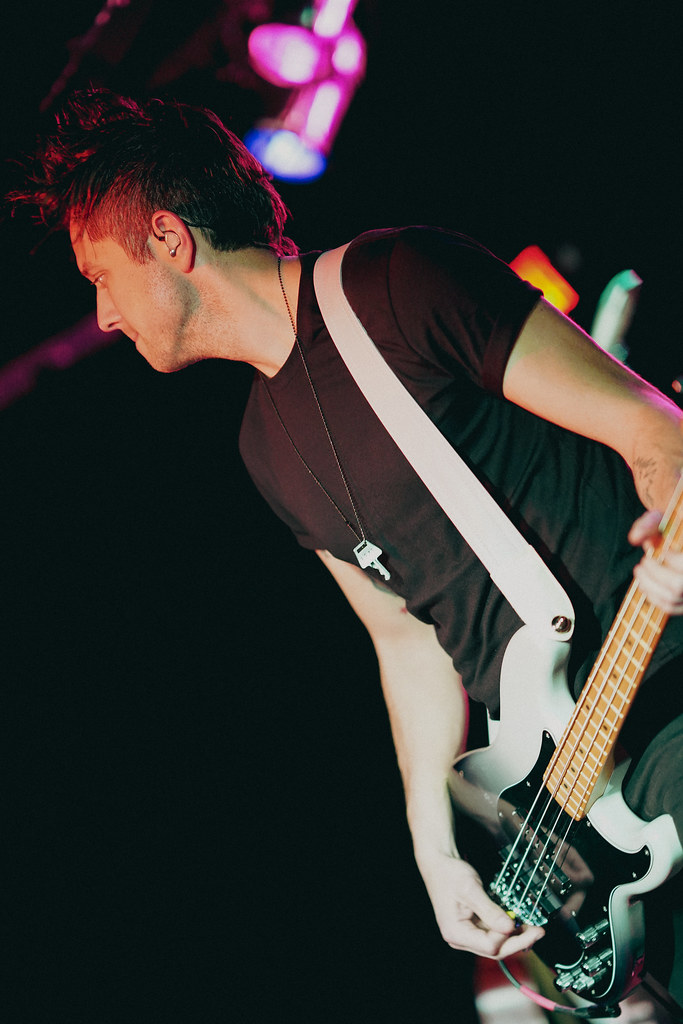 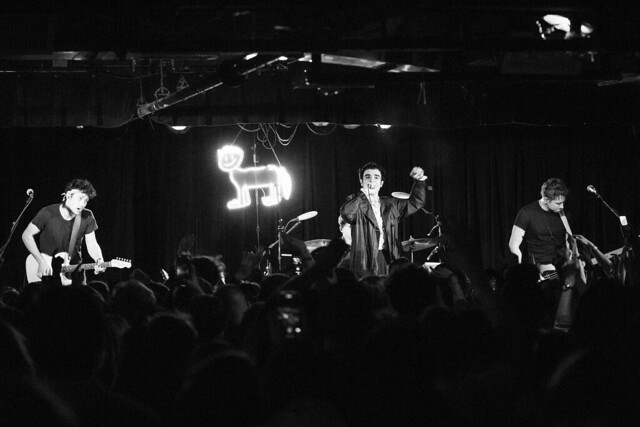 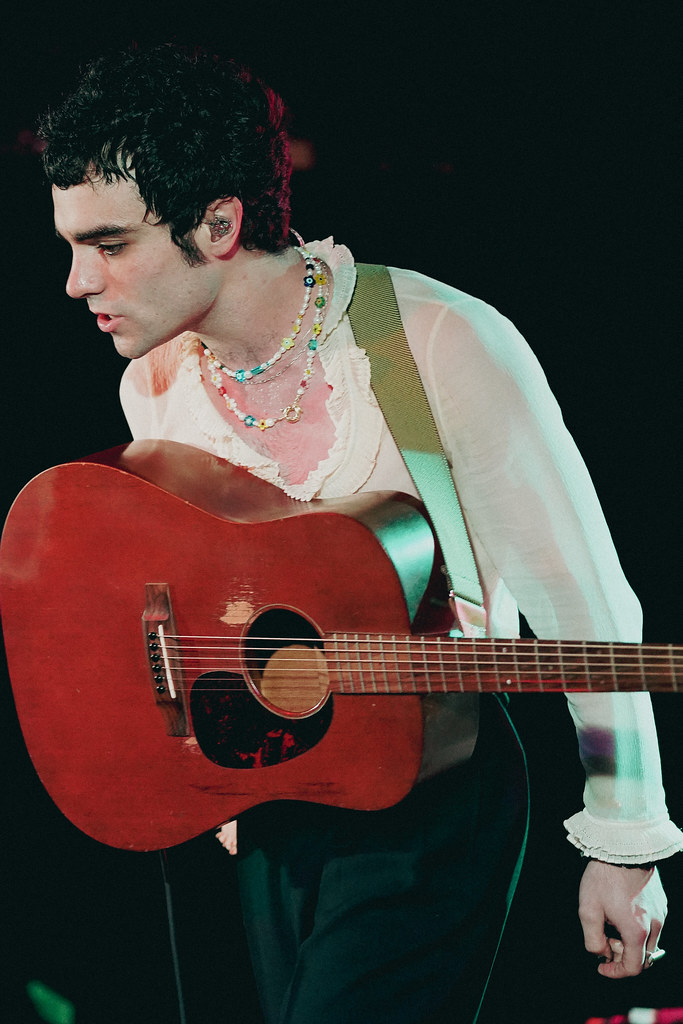 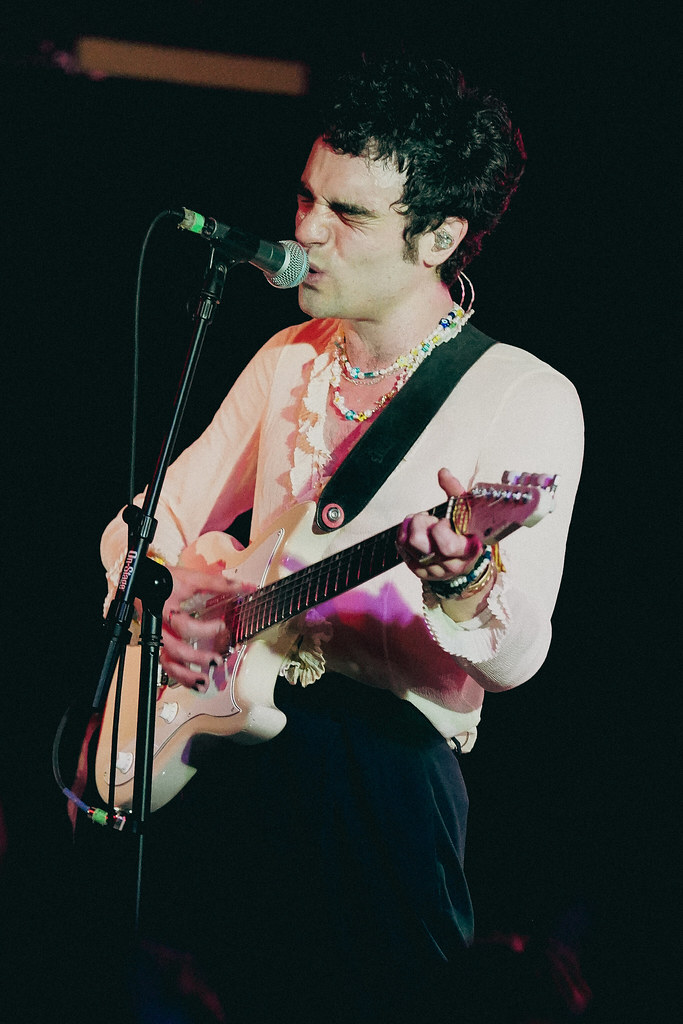 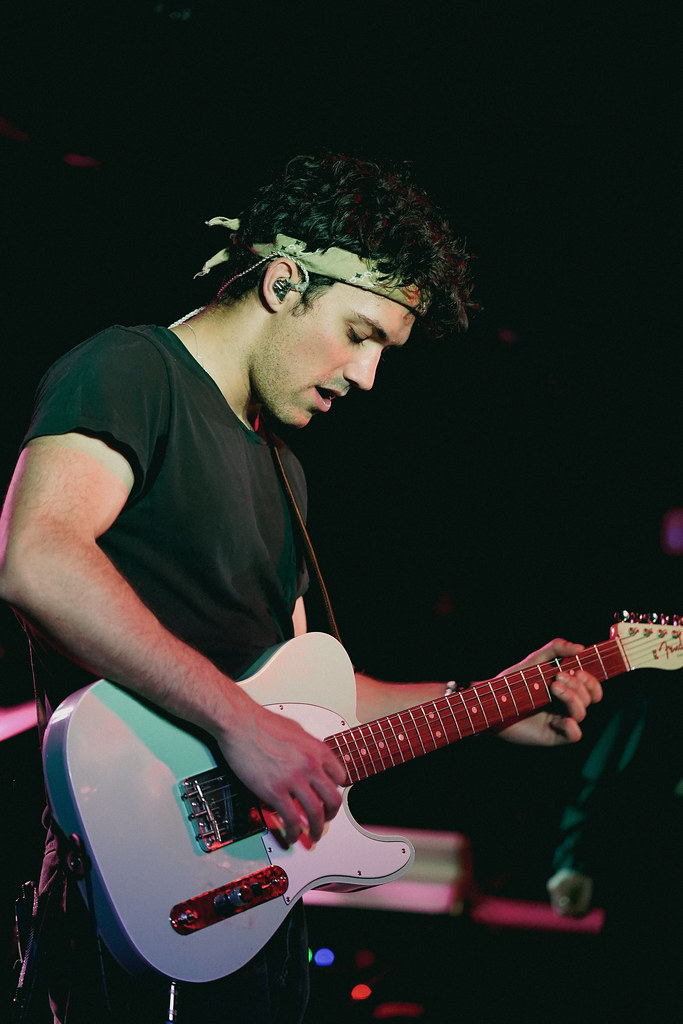 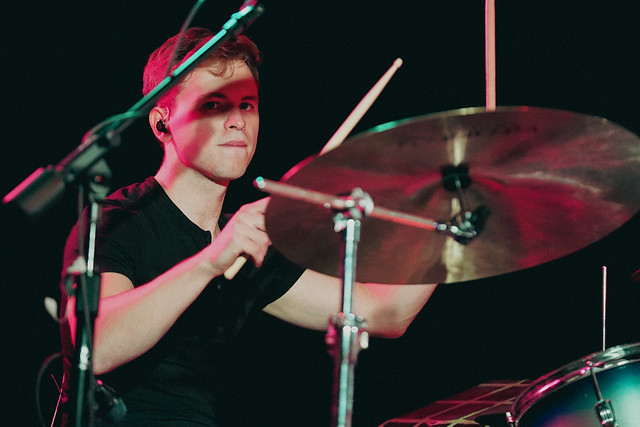 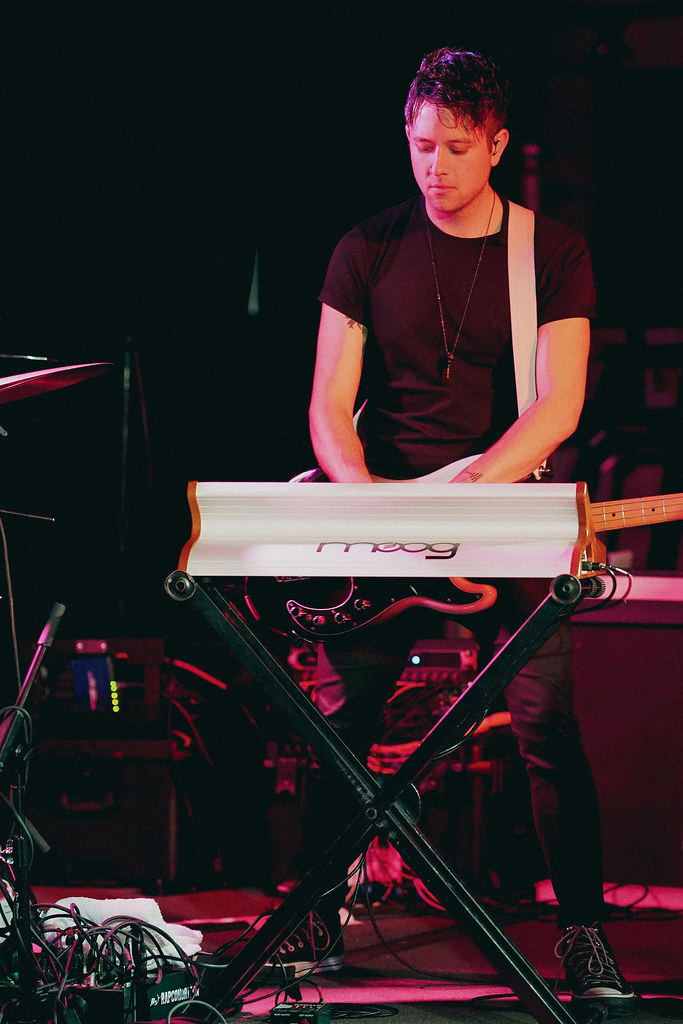 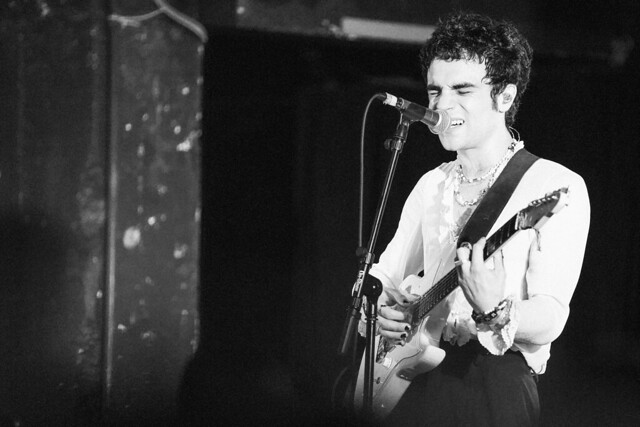 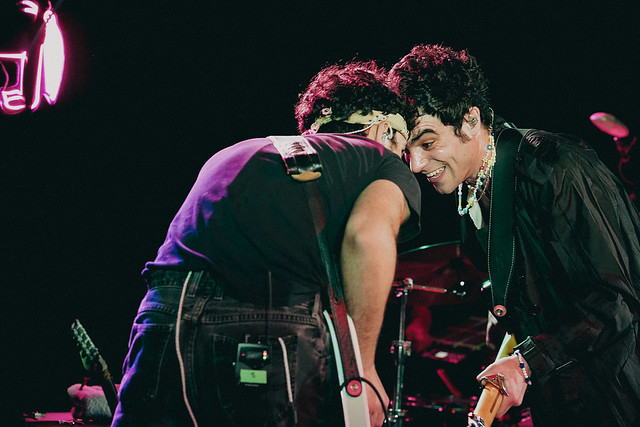 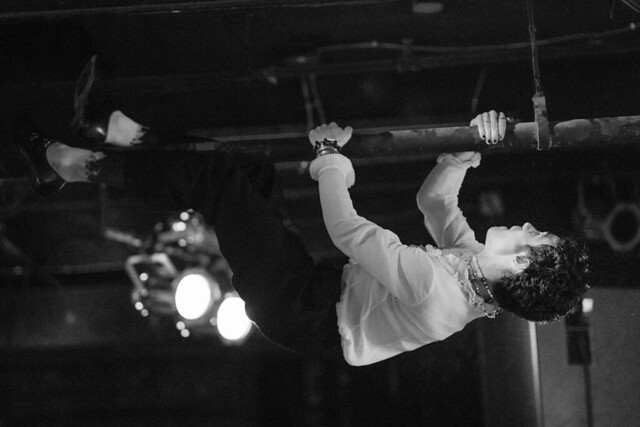 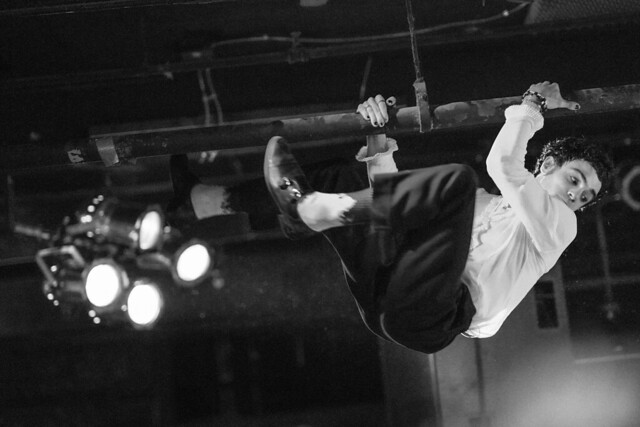 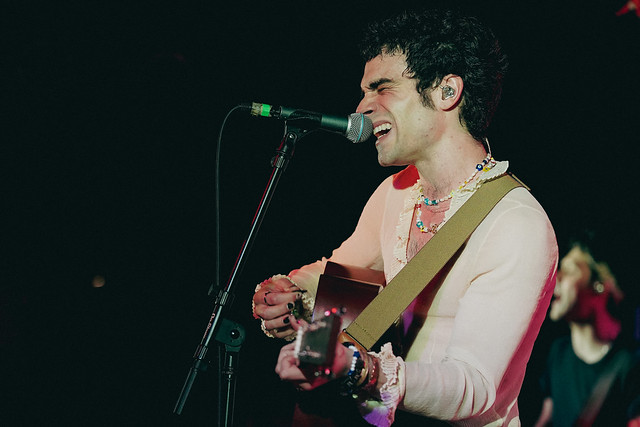 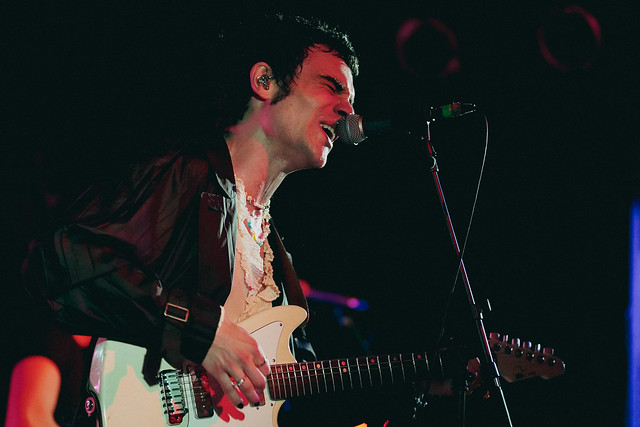 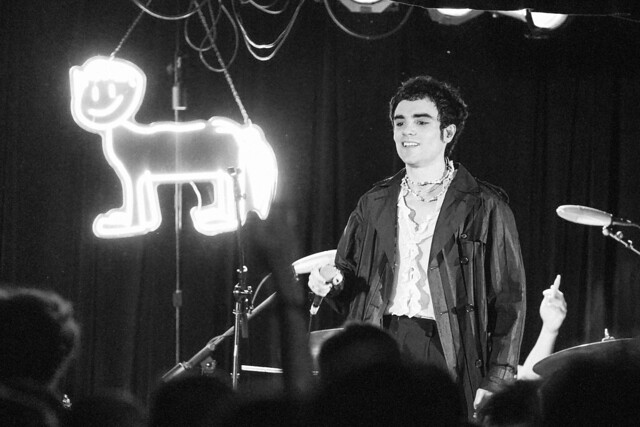