“Lifting your spirits,” teased Cowboy Junkies vocalist Margo Timmins in the band’s recent appearance at The Birchmere, “is not what we do.”

It wasn’t quite a joke, as it’s a true statement. “Upbeat” would not describe their music, which is deeply moody and full of heartache. Sonically, the Junkies accomplish this by combining two distinct musical traditions, both of which have plenty of sadness: the alternative and art-rock of Lou Reed and the Velvet Underground — whose “Sweet Jane” still occupies a central place in their setlist — and David Bowie, whose “Five Years” they covered in their encore, and the dusty Americana embodied by their late friend, the legendary Townes Van Zandt, whose “Rake” was featured in the second set.

Since they last appeared at The Birchmere before the pandemic, the Junkies have released two albums. The first, Ghosts, came out in 2020, and was made in response to the death of the Timmins siblings’ mother.

As Margo explained on April 10, the late matriarch was mother to three members of the Cowboy Junkies — herself, Michael Timmins (songwriter, guitarist), and Peter Timmins (drummer). She passed away following an extended illness; she knew she was dying, and she knew how long she had. This allowed her to talk to her children about her life.

After beginning with “The Things That We Do To Each Other,” followed by “Sweet Jane,” they played three of the songs from the Ghosts album: “Desire Lines,” “Breathing,” and “Do It Again.” After that last one, Margo said, “That’s enough about death and dying, at least until the next set.”

When she was introducing the songs from Ghosts, Margo poked a bit of fun at herself, noting that she was two years older than the last time she was here. “Anyone over 60 doesn’t want lights on her,” she said. “You look great!” exclaimed someone in the audience, who was saying what everyone is thinking. Margo is one of those women who, like Emmylou Harris, might be even more beautiful after their hair turns silver.

The Junkies finished the first set with two covers. The first is one they recorded for their very first album, 1986’s Whites Off Earth Now: Lighning Hopkins’s “Shining Moon.” The second, the Rolling Stones’ “No Expectations,” appears on their most recent album, the covers collection Songs of the Recollection.

Stream 2022’s Songs of the Recollection by the Cowboy Junkies on Spotify:

The show followed the Junkies’ usual format, with a shorter first set and a longer second set. When they came back from intermission, they started with the seriously sexy “All That Reckoning.” After “My Little Basquiat,” they got back into the covers from the new album with Gordon Lightfoot’s “The Way I Feel,” then Neil Young’s “Don’t Let It Get You Down.” Margo described Neil as “the king of Canada.”

The rest of the second set, except for “Rake,” consisted of the band’s original songs. Introducing “Something More Besides You,” Margo told the audience that Lay It Down remains one of her favorites among the band’s albums, although, after doing this for more than 30 years, picking favorites is difficult. Other songs included “Angels in the Wilderness,” “Missing Children,” “Escape Is So Simple,” “Hunted,” and “Misguided Angel.” Several songs during the second set were played acoustically, with some of the band taking a break.

After the Bowie cover, the Junkies finished the performance with a cover of Lynn Howard’s “Walking After Midnight,” which they recorded on their breakthrough album, The Trinity Sessions. Normally, Margo explained, she would come out to meet with the audience, but she was foregoing that out of an abundance of caution in dealing with Covid. She hopes, eventually, to be able to get close to their fans again in the future.

Even without that post-show encounter, there’s a lot of intimacy at a Cowboy Junkies show. The band’s audience has been on this journey with them for decades now, and the Timmins siblings feel like old familiar friends, not just performers. Margo somewhat notably suffers from stage fright, and her ability to overcome it really expresses itself in a way that’s very sincere and endearing, and makes her seem particularly real to her fans. The music at a Cowboy Junkies concert may be melancholy, but there’s a warmth of spirit to the event.

Here are some photos of Cowboy Junkies performing at The Birchmere on April 10, 2022. All photos copyright and courtesy of Jason Nicholson. 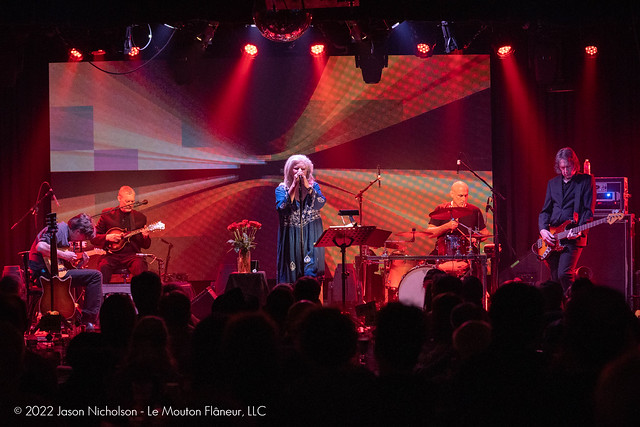 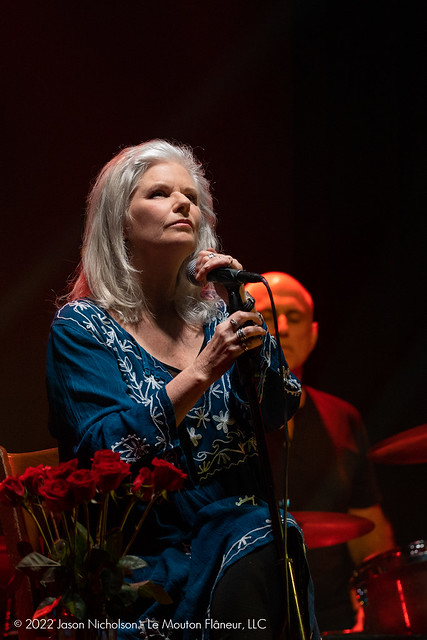 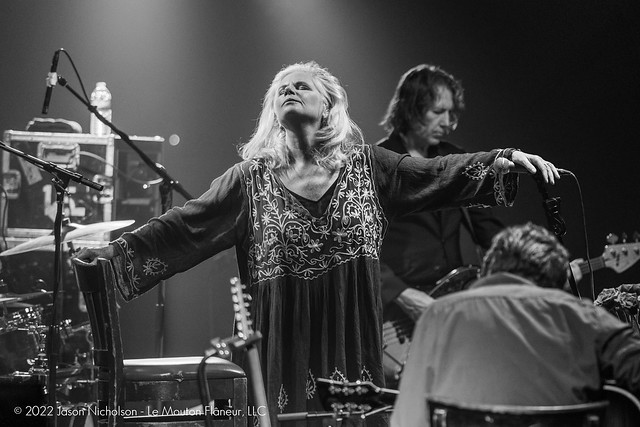 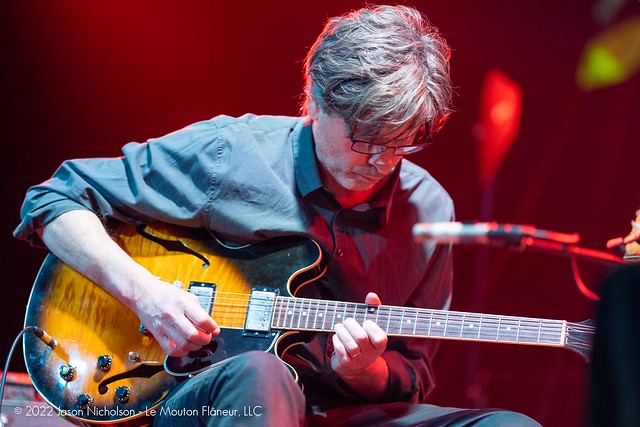 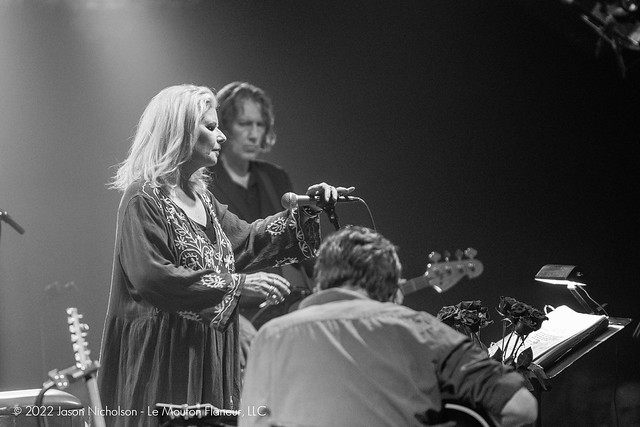 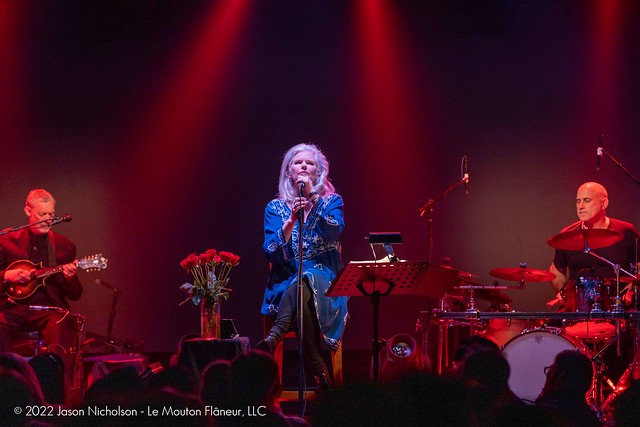 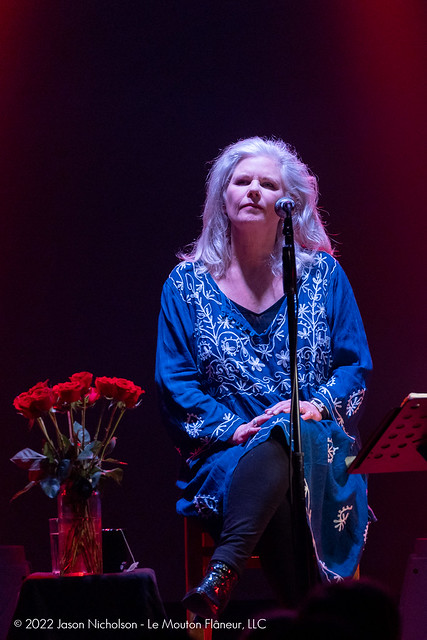 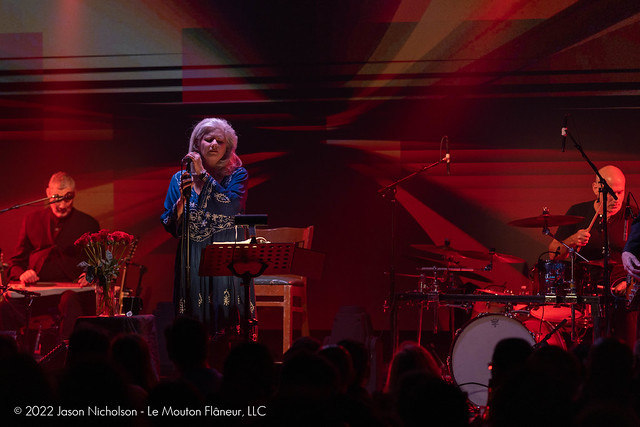 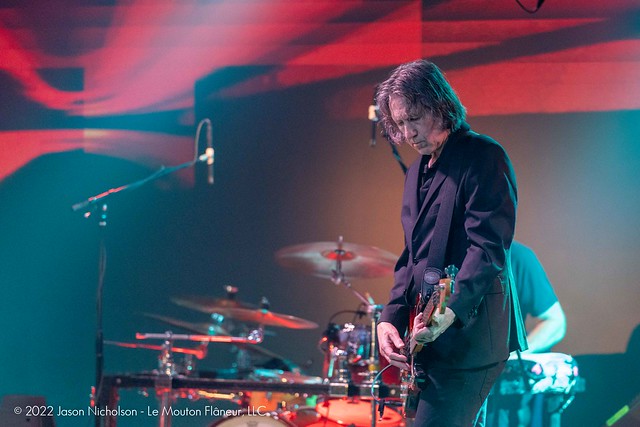 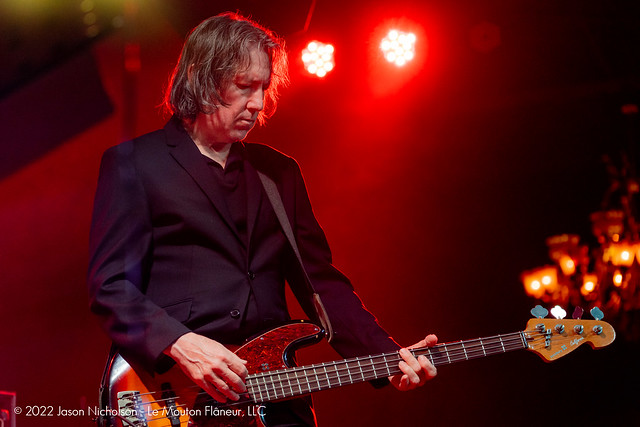 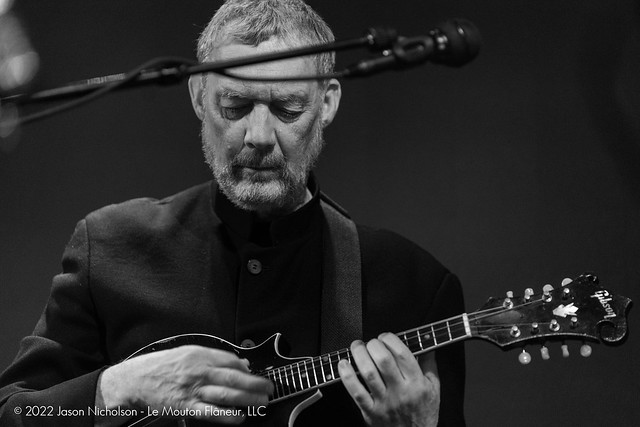 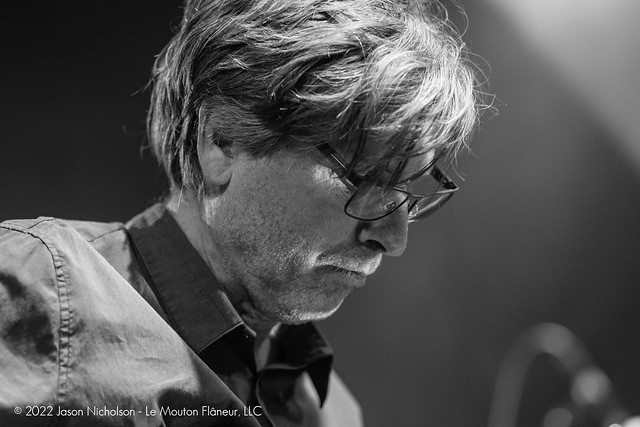 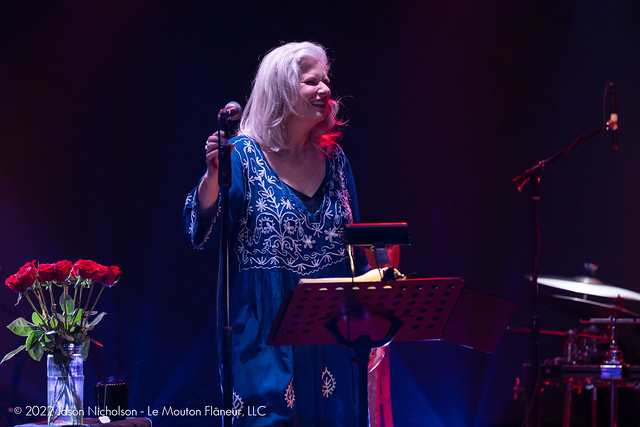 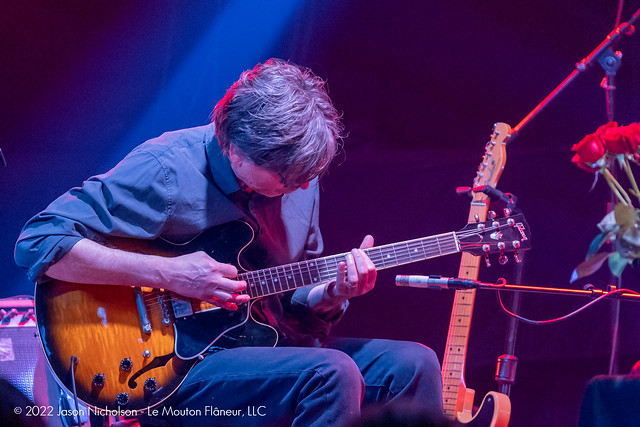 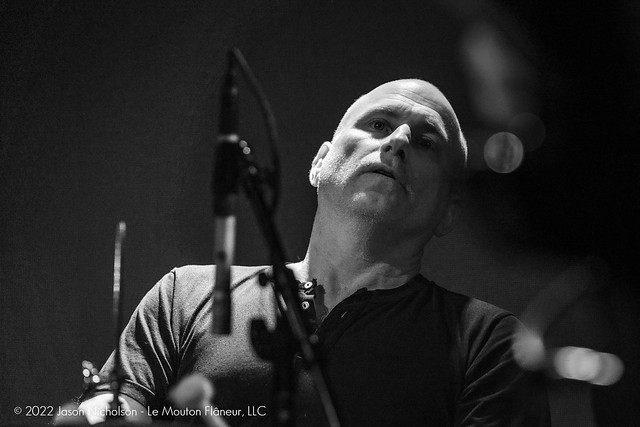 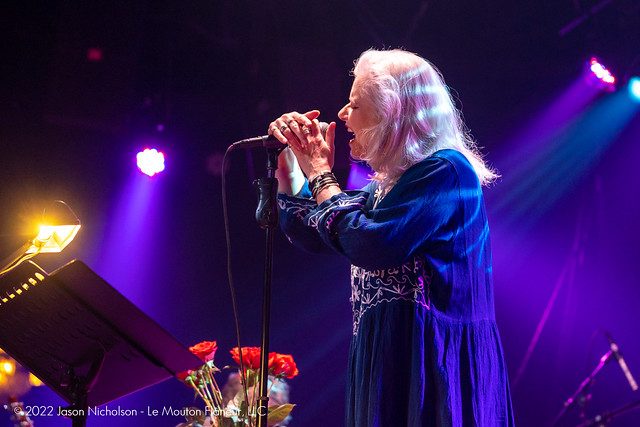 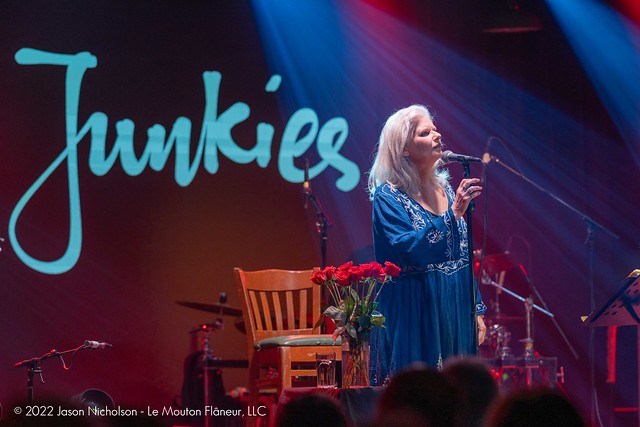 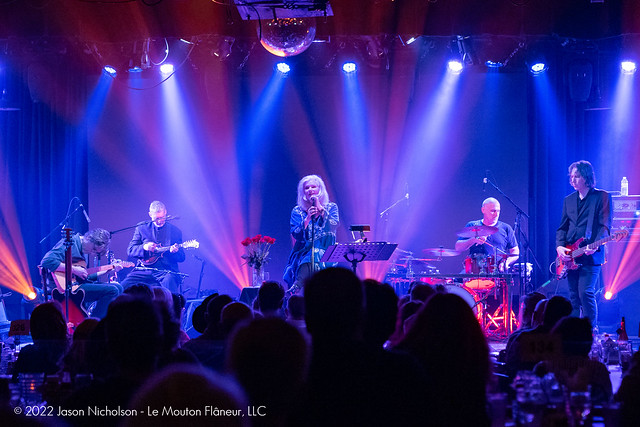 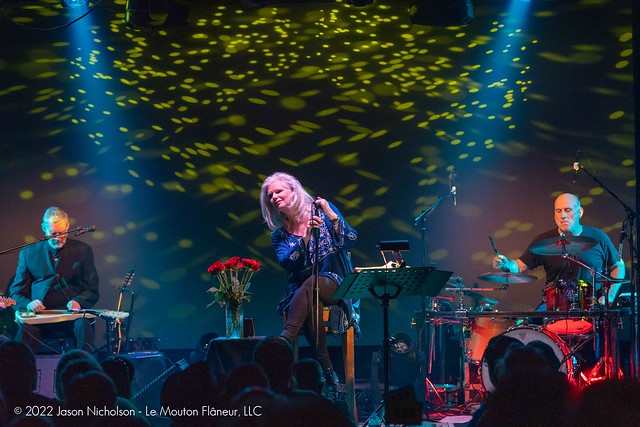