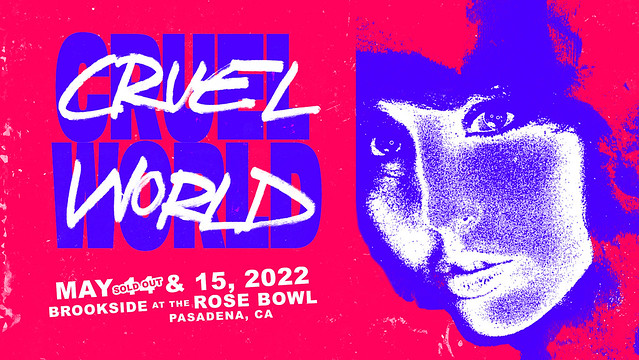 Cruel World Festival is taking place Saturday, May 14, and Sunday, May 15, 2022 at Brookside at The Rose Bowl in Pasadena, California featuring performances by Morrissey, Bauhaus, Blondie, DEVO, Echo & The Bunnymen, The Psychedelic Furs, Violent Femmes, The Church, and many more.

The lineup repeats performances each day of the festival. The first day is sold out but limited tickets remain for Sunday, May 15!

Presented by Goldenvoice, Cruel World includes groundbreaking new wave and post-punk bands from the ’70s and ’80s as well as a big dose of modern-day acts that take inspiration from the legacy chart toppers!

These timeless artists will come together for this single day event which will see new music from Morrissey’s highly anticipated album Bonfire of Teenages performed live which he’s called “the best album of my life.” Joining him are headlining legends Bauhaus, Blondie and DEVO, artists behind such hits as “Bela Lugosi’s Dead,” “Heart of Glass,” and “Whip It” respectively.

Watch the official music video for “Whip It” by DEVO on YouTube:

A limited number of general admission tickets remain for the festival on Sunday, May 15! Ticketholders will receive a mobile ticket two weeks before the event. Mobile tickets will be delivered electronically to the email address associated with an order.

Venue doors open at 12pm. Curfew is 11pm. The show will take place rain or shine. Guests cannot exit and return to the Rose Bowl. While all ages are welcome, Clubhouse and Clubhouse Platinum (sold out) are 21+ only. Lineup and set times are subject to change without notice.