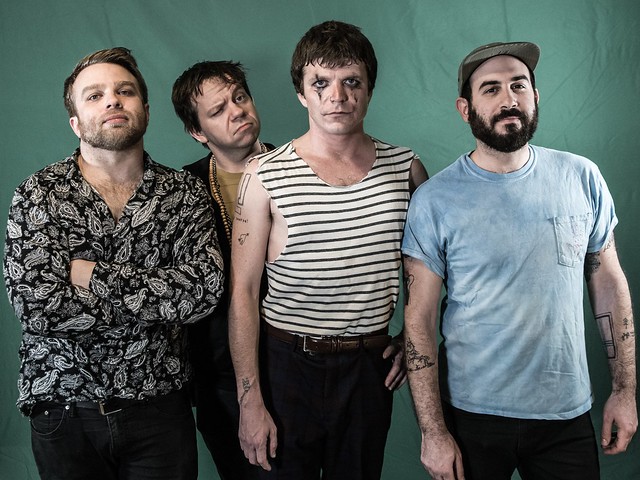 “Well, this is a blasty blast.”

For the past couple rotations around the Sun, that thing got in the way of live music for me. It had been over two years since I had seen a band perform in the flesh…to be more specific, 773 days have come and gone since I saw Dead Kennedys rock the shit out of 9:30 Club. So I don’t need to tell you just how goddam excited I was that one of my favorite Fat Wreck Chords bands, PEARS, was gonna be playing at one of my favorite (and crustiest) venues the District has to offer, the Pie Shop.

Not to paint too crass a picture, but like, we’re talking full-on, pre-pubescent hormones excitement level. And boy oh boy, PEARS did not disappoint.

But before we get ahead of ourselves here, let’s take a moment to consider the opening act at Pie Shop no April 23. Talk Me Off provided the perfect lubricant to this overly satisfying night of punk and hardcore. Hailing from Richmond, Virginia, and leveraging the dueling yet complementary vocal abilities of guitarist and bassist, this determined trio favored a tried-and-true, four-chord pop punk template, keeping the crowd bobbing along while injecting some interesting rhythmic breaks to keep us on our feet. The set was obviously well rehearsed, the band powering through their songs with few breaks and with a focus on keeping energy levels up. I got strong Kody Templeman (of The Lillingtons and Teenage Bottlerocket fame) vibes throughout, which, if you’re reading this Talk Me Off, YOU’RE WELCOME and gimme a call at 867-5309 if you want to hire me as your publicist.

Oh, shout out to Talk Me Off’s bassist’s mom, who I happened to be next to during most of their set, for being one of the most sincere and sweetest fans I’ve ever come across.

After the crowd was thoroughly primed by Talk Me Off, PEARS entered the room…

Check out PEARS setlist for the night, compiled by me, via Spotify:

Since their formation in New Orleans in 2014, PEARS has carved out a niche in the alternative music scene, endearing themselves to fans with a creative blend of melodic hardcore, thrash metal and pop punk. They’re one of those bands that deeply ingratiates, roping you in with ubiquitous personal themes while simultaneously impressing/hooking/terrifying you with their breakneck speed and schizophrenic arrangements. Never having seen them perform, and experiencing this in an intimate, sub-100-cap-space setting , I questioned how PEARS would translate their complex recorded material into a live setting.

Answer? They fucking killed it. The Pie Shop crowd, which true to any punk show in DC featured a wide range of ages under a common flag of band shirts and tattoos, resonated with the earnest, hard-hitting tunes that the band was supplying. Whether in the back headbanging and sipping on whiskey, or in the middle of the (modestly sized) mosh pit tossing beer cans towards the stage, each and every fan in the room displayed the ardent fervor seen only before in Jim Jones’ wet dreams.

Watch the official music video for “Naptime” by PEARS on YouTube:

Weaving multi-layered harmonies on top of dissonant guitar riffs and a jarring rhythmic backdrop, the band cleverly toyed with our states of mind, not to mention our heart rates, with their start-and-stop riffs, siren-esque melodic hooks, and doomy sludge break downs.  Guitarist Brian Pretus displayed real-life magic with otherworldly guitar tones and panic-inducing harmonics, while frontman Zach Quinn mesmerized with his impressive vocal range, fearless willingness to engage with the crowd, and deadpan humor.

Having released their most recent album on the eve of the COVID pandemic, PEARS was naturally inclined to play a bunch of hits off this latest effort, including sonic WMDs Killing Me, Rich to Rags, and Comfortably Dumb. But they still had some room, in their whirlwind hour-ish set, to include some older favorites such as Grimespree, Green Star, and Snowflake. As a nod to one of DC’s favorite sons, Ian Mackaye, they also slipped in a raucous cover of Minor Threat’s anthem, Straight Edge.

At one point during their performance, the quartet treated us to a hypothetical Hormel Chili jingle, done in the style of Korn ®. Just…ask me about that one later.

All in all, this was a great foray back into live music. To quote Zach halfway through the set, “This is a blasty blast.”