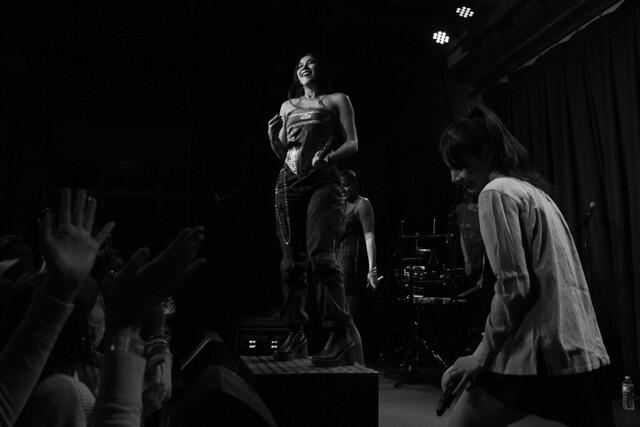 The oldest of the gang being a mere 23 years old, the band has an impressive 1.1 million monthly listeners on Spotify. Their discography feels like a warm summer day, and itcarries an uplifting feeling that proved to have the power to move a room.

I had the privilege of photographing MICHELLE during their act supporting Arlo Parks on her Collapsed in Sunbeams Tour late last fall. It was such a pleasure seeing them again and witnessing their growth as a group. They’ve kept the same underlying sound that they’ve cultivated so well since the beginning of their career, but since I saw them last, they’ve deepened their individuality in the music industry.

Filling Songbyrd Music House from the stage to the bar in the back in a sold-out show on April 27, MICHELLE set an exemplary mood amongst the crowd. Hitting off their set with “SYNCOPATE” from their freshly dropped album, AFTER DINNER WE TALK DREAMS, the three singers who were able to perform at the DC show, Sofia D’Angelo, Emma Lee, and Jamee Lockard, coordinated punchy dance moves to accompany their music.

Listen to MICHELLE’s new album AFTER DINNER WE TALK DREAMS here on Spotify.

The band isn’t only musically talented but also more than skilled at subtly applying choreography to their sets. As soon as you thought each member was doing their own thing, each freestyling their own movements, they made a small motion or gesture in unison with the music and tied the stage back together.

For such a young group, they did a super impressive job throwing this show. The four of them are more than professional, and take themselves and their shows seriously, but they’re still able to have fun and let loose with the crowd, which I greatly admired last week.

Check out some more pictures from MICHELLE’s performance at Songbyrd Music House on April 27, 2022. All pictures copyright and courtesy of Katie Child.