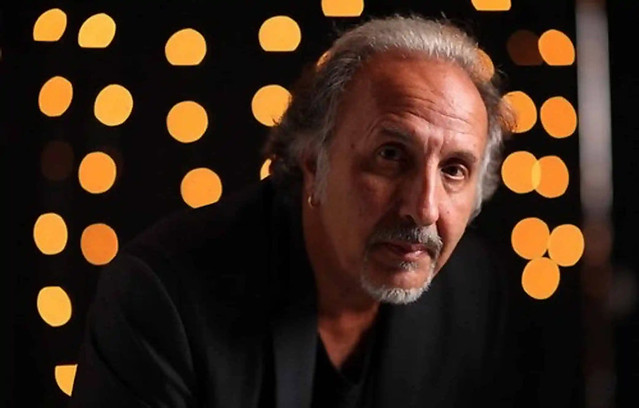 Joe Grushecky is “the first one on either side of the family out of the coal mines,” he told his audience recently at Jammin’ Java. A lifelong resident of Pittsburgh, his career has had its ups and downs, but he’s stayed faithful to the place he comes from.

“Grushecky,” he explained is a Ukrainian name. And while that might not be unusual in his hometown, record executives wanted him to change it. “They will never get that name in Alabama,” they said — and, as Joe conceded, “They didn’t.”

Joe never did change his name, nor did he ever leave his hometown, which appears in songs like “East Carson Street.”

At Jammin’ Java on July 30, Grushecky opened his set with “What Did You In The War?,” a track from his 1995 comeback album, American Babylon. They released a 25th anniversary edition, which is available in vinyl, but, as Joe acknowledged, “We put it out in the 26th year.” Before playing Chainsmoking'” and “Never Be Enough Time” in the second set, he told the story behind the album: Bruce Springsteen produced it, playing and singing on several of the tracks, and the album revived their careers.

Not only was Bruce involved with the record, he even went out with the Houserockers, getting in the van with them for “12 hour drives on the Pennsylvania turnpike.” There are, as many critics and fans have observed, many similarities, both in sound and lyrics. They’ve even written songs, like “Code of Silence,” together, which both of them have recorded. But there are notable differences, too: Grushecky music is more stripped down — less instrumentation than Springsteen’s — and it rocks harder. The intro from “Daytripper” that played them into their first song sounded a little like it might have in the hands of The Rolling Stones.

Stream “Code of Silence” performed by Joe Grushecky & The Houserockers on YouTube:

Spending all that time with Bruce, though, he picked up a few of his songs, “Light of Day” and “Hearts of Stone.” The former has given its name to the Light of Day Foundation, which raises money for Parkinson’s Disease. The Houserockers have long participated in the shows the foundation has put on, which have raised $8 million. The first send ended with Springsteen’s “The Promised Land” after a cover of “Burning Love.” Joe called the new Elvis movie “spectacular.”

That album came out on the Razor & Tie label. Getting that record deal allowed Grushecky to quit his day job as a special education teacher. You have to respect a guy who dedicated his life to making great rock & roll and helping kids. I’m a special education success story, so I have a lot of appreciation for people who do that.

American Babylon was made with the Houserockers, Grushecky’s second band. That point can be a little confusing, as the first was similarly named — The Iron City Houserockers. That first band’s peak probably came with 1980’s Have a Good Time…But Get Out Alive! The Houserockers followed “What Did You In The War?” with a cut from that album, “Don’t Let Them Push You Around.” The second set started with another song from the album, “Angela.”

Grushecky is still creating new music. “Here in ’68” will appear on his next album. “I vaguely remember it,” he said. “I think I can remember it. But it’s close enough to the truth.” Another new song, “Until I see You Again,” is about “old friends.”

Joe poked a little fun at how long he’s been this. He told the audience that “When The Crows Go Crazy” was written in ’89, when one of his bandmates, Johnny, was only a year old.. (I was 9.) Fittingly, the show ended with “Down The Road Apiece.”

One thing I will note: This is as loud a show as I’ve been to at this venue. These guys still rock, and they rock hard. They may have been doing this a long time, but they haven’t lost the edge or the fire that brought them to it in the first place.